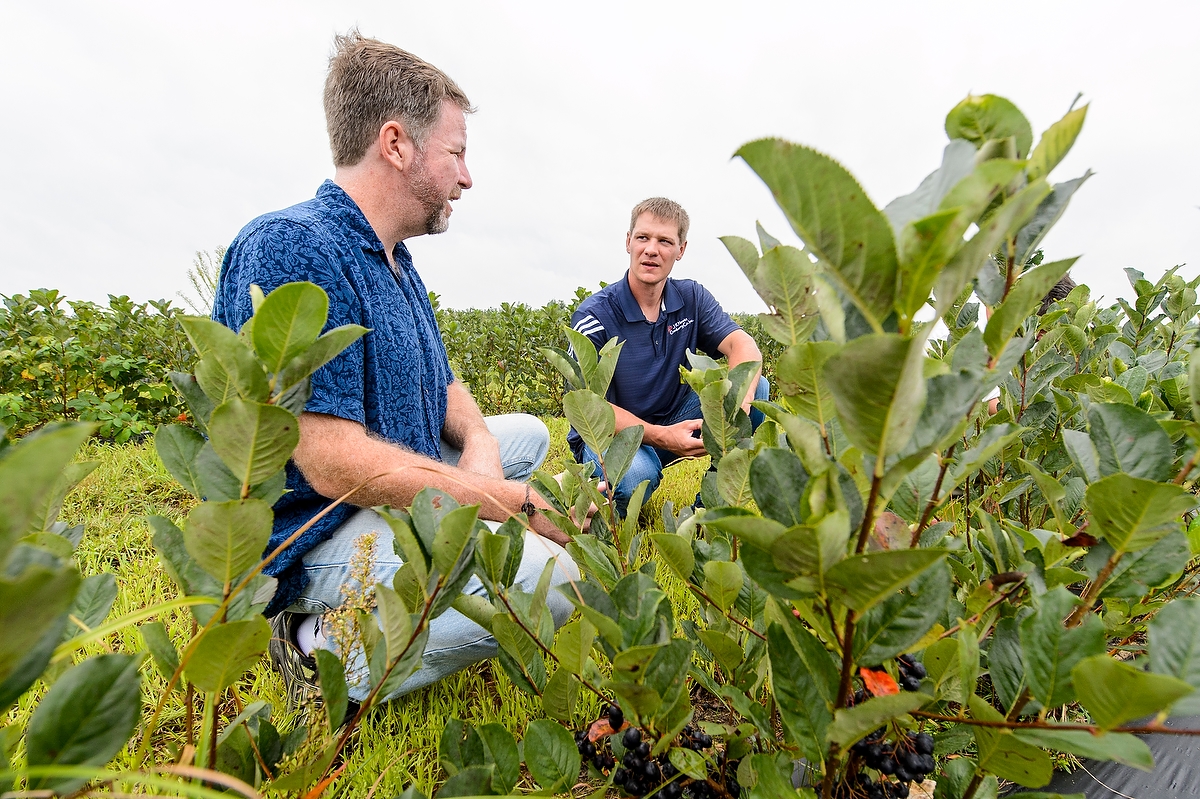 The overcast sky is clearing as a wave of moderate thunderstorms moves off to the east. On rolling, sandy terrain northeast of Tomah, in the heart of cranberry country, rows of short shrubs called aronia have reached two feet in height.

Although Adam Nemitz, who planted the bushes two years ago, says they are “in their infancy,” the more vigorous bushes have already started to bear aronia fruits – clusters of blue-black berries with a passing resemblance to large blueberries. When the bushes reach eight feet in height, each can bear about 20 pounds of a fruit that is sometimes touted, in this nutrition-conscious era, as the “next superfruit.”

The optimist would hope we are looking at Wisconsin’s next specialty crop; but the realist would see a 20-acre experiment with an uncertain future. Nemitz is an optimist – both his family and that of his wife, Sandy, have been growing cranberries for generations around here.

Farmers by definition are optimists, but Nemitz recognizes that success is hardly assured.

Nemitz first heard of aronia in 2013 from a fruit-grower’s magazine. “I did not know what aronia was, so I did some research,” he says. “It is machine harvestable, and that piqued my interest, and I always wanted to diversify.”

His farm, the JR Nemitz Cranberry Co., Inc., has 83 acres of cranberry marshes, part of a Wisconsin industry that is the nation’s largest. Yields have benefited by the introduction of several varieties developed at UW–Madison, but abundant harvests have put downward pressure on prices since the 1990s. 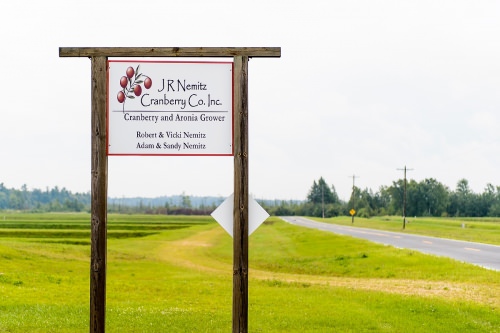 The ancestors of both Adam and Sandy Nemitz have been growing cranberries in the Tomah area for generations. Photo: Bryce Richter

The experiment with aronia was a business decision, Nemitz says. “I wanted to spread the risk with another crop; we already had the land, so there was not a lot of investment to get started.”

Several other growers in the area have planted aronia, but the market for aronia remains undeveloped, Nemitz says.

As Midwest farmers discuss forming a cooperative to promote aronia, they accept that the crop’s success will depend on marketing, which in turn will rely on letting people know the health benefits of a flavorful fruit that grows on native shrubs once called chokeberries. “I usually hear the taste described as astringent and/or earthy,” says Nemitz, “with a hint of sweet in the first bites and an earthy finish.”

Nemitz or other cranberry growers know the sales value of scientifically valid health claims. Cranberries benefited substantially after their reputation for fighting urinary tract infections was shown to be the consequence of a plant chemistry that deters bacteria from attaching to cells in the urinary tract.

So it’s no accident that Nemitz’s companion in the aronia field is Christian Krueger, CEO of Complete Phytochemical Solutions, which applies expertise developed at UW–Madison to complex questions of plant chemistry.

Complete Phytochemical Solutions (CPS) was founded in 2010 by Krueger, a research program manager at the Department of Animal Science, Jess Reed, a professor in the department, and Amy Howell, an associate research scientist from Rutgers University. Located in Cambridge, Wisconsin, the company specializes in plant secondary compounds. Although usually present in small quantities, phytochemicals are a major reason we’re told to eat our vegetables – and fruits.

The five employees at CPS include Andrew Birmingham, director of analytic services, who is a graduate of the UW–Madison masters in biotechnology program. 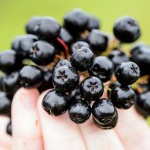 Phytochemicals include anti-oxidants, vitamins, and drug-like substances such as salicin, the pain-relieving compound from which aspirin was synthesized. Pigments also qualify: The dark anthocyanins may explain the health benefits of red wine.

Plant chemistry is a moving target. The crop variety, growing environment, and details of harvest and storage all affect the chemistry. The questions continue during processing, Krueger says. “Each handler and processor has a unique, proprietary way of manufacturing, and every step can impact the location, content and breakdown of the phytochemicals. Only by extensive testing can you certify that each lot of finished product has the same bioactive constituents that you claim.”

By delving deeper into the chemistry, he adds, “We can move beyond generalizations so the product does not fall just under an umbrella like ‘anti-oxidants,’ but offers a more specific chemistry.”

CPS relies on an analytical process suited to complex mixtures with the intimidating name of matrix-assisted laser desorption/ionization time-of-flight mass spectrometry. The technique, which the company refers to more simply as polyphenol fingerprinting, comprehensively identifies the compounds and their levels, “so we can document the variability of raw and processed ingredients, and support claims of authenticity,” Krueger says.

Krueger’s company has done analysis for the Ocean Spray cranberry cooperative, and for the new Crangrow cooperative that opened its doors in Warrens in August. “We took the fruit and broke it down to get all the composition information. Now that we understand the real health content of a cranberry, how can we promote it?” 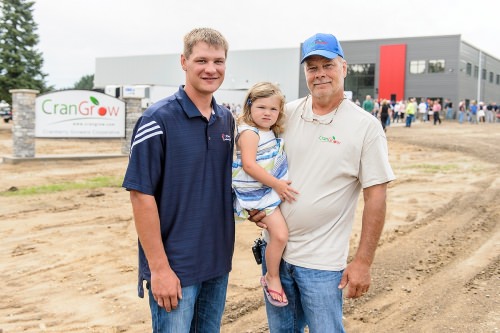 Few farmers or processors have time to develop expertise in analytical chemistry, Krueger observes. And that makes CPS, with its high-tech analytical procedures, all the more important to marketing for industries like cranberry and aronia.

The nascent aronia industry already converts the high-fiber, low-carbohydrate fruit into several products, but in small quantities. While planning marketing tactics for the new aronia cooperative, “The biggest part will be getting the marketing down: do we start with sweetened or dried fruit? With cereal or granola or oatmeal bars?”

In attempting to market their would-be superfruit, aronia growers need to start with the basics, Krueger says.  “We need to understand what’s in the original crop that reaches the processor, and what it looks like during processing, drying, freezing, extraction.” 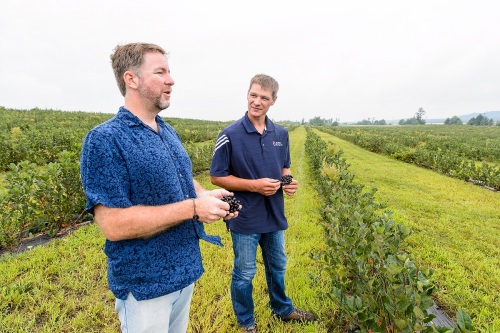 These aronia bushes are too young to produce a useful crop, as Krueger (left) and Nemitz discussing how appearance, taste and nutritional value help aronia break into the market. Photo: Bryce Richter

As a west wind continues to clear the sky, Krueger and Nemitz sample the ripening aronia berries, concentrating for the moment not on chemistry but on more fundamental qualities, which they inevitably compare to the berry crop in the surrounding fields. “Aronia is softer than a cranberry,” Krueger says, “between a blueberry and a cranberry, in terms of consistency and mouth feel.”

These observations, combined with the high-tech analysis that is CPS’s stock in trade, are an essential foundation for a marketing campaign that focuses on healthy food, Krueger says. “We are finding out what aronia is and using that information to identify its unique market potential. That’s what we helped the industry do with cranberry. Aronia is another example of working with good, forward-thinking Wisconsin business folks. How do we take a commodity like the cranberry or aronia and put more value in the hands of growers, handlers and processors?”