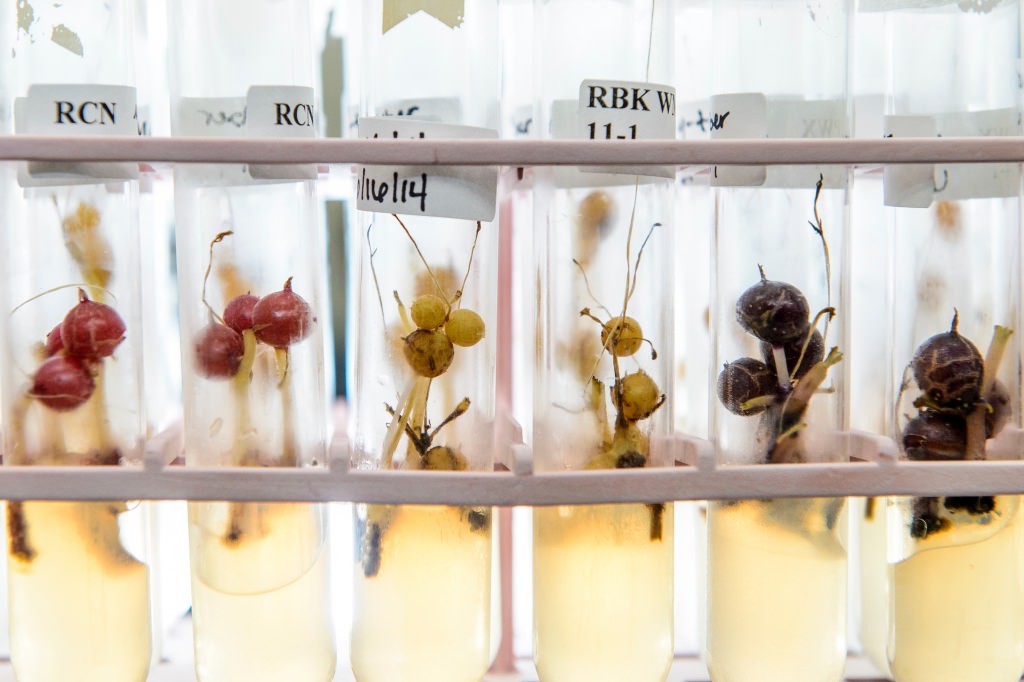 Years before that french fry landed on your plate, the plant that would eventually give rise to the spud your fry was cut from was sealed away deep in a secure-access building, growing slowly in a test tube inside a locked growth chamber.

At least, it was if it was the product of the Wisconsin Seed Potato Certification Program, or WSPCP, a 104-year-old program run by the University of Wisconsin–Madison dedicated to supplying Wisconsin seed potato farmers with quality, disease-free tubers.

All that security helps keep these important plants clean. And clean is a big deal for potatoes. Because they are grown from the eyes of tubers, called seed potatoes, rather than from true seeds, potatoes can easily carry bacterial and viral diseases in their starchy flesh from generation to generation. The solution is exacting cleanliness and rigorous testing at every stage of potato propagation.

WSPCP supplies 70 percent of the seed potatoes for Wisconsin’s 9,000 acres of farmland dedicated to propagating seed potatoes. The program certifies 200 million pounds of seed potatoes every year, enough to plant roughly 90,000 acres for commercial growing. Those spuds are then sold to commercial potato growers in Wisconsin, other states and around the world to be turned into farm-fresh potatoes, chips and fries. 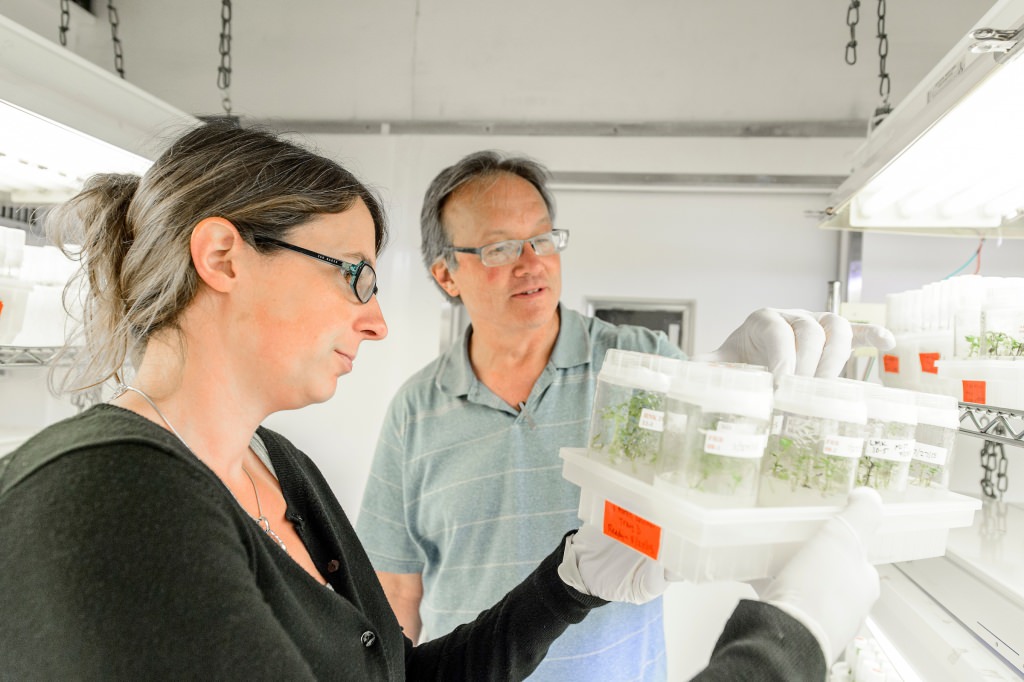 Each one of those potatoes’ progenitors once passed through the hands of two researchers at UW–Madison, Andy Witherell and Brooke Babler. In about three months, they can turn a handful of small potato plants growing in test tubes into hundreds. Multiply that by dozens of different varieties of potatoes — Caribou Russet, Magic Molly, German Butterball — and together Witherell and Babler produce tens of thousands of potato plantlets every year.

Witherell and Babler work out of the Biotron, a facility on the UW–Madison campus designed to replicate any climate needed for research. The building’s secure access and clean protocols help them scrub the potato plants of any diseases and propagate them in sterile environments until they’re ready to plant in soil.

“This is a good place to grow plants because we’ve got a system that’s really clean,” explains Witherell. “The Biotron air is filtered, and we have a clean room to work with.”

The researchers start by sterilizing an eye of a tuber and then inducing it to grow in a sterile container full of a jelly-like growth medium containing bacteria- and virus-inhibiting chemicals. As the spud sprouts into a small plant, they ramp up the heat to try to kill off any viruses. Then they clip off a portion of the shoot and replant it in a clean test tube of growth medium. 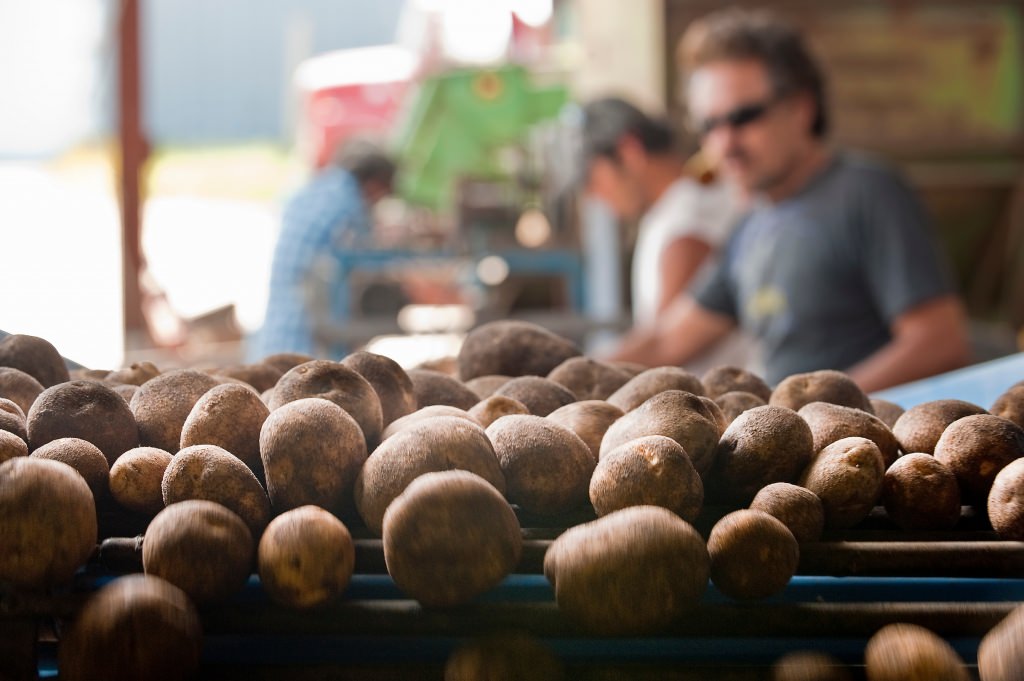 Workers at a potato farm near Coloma, Wisconsin, pick through harvested potatoes as they come down a conveyer system. Photo: Bryce Richter

Babler and Witherell can keep their plantlets in stasis in cold storage until the call comes in — 308 plantlets of Dark Red Norland are needed by July. Babler pulls out a box with several plantlets and takes them to the clean room, a space about the size of a parking place. On a sterile work surface, she takes out a scalpel and slices the plants into several pieces before replanting them in a new box. Just a small portion of one plant’s stem will grow an entirely new plant under the right conditions.

In this way, eight potato plants become 30. Four weeks later, those 30 become 80; then 80 become 310. They are all genetically identical clones of one another and they are all still clean.

Thousands of plantlets of different varieties are shipped to the program’s farm in Rhinelander, Wisconsin, where they are grown hydroponically or in pots to begin producing tubers. Over several generations, one plant gives rise to many spuds, which in turn are replanted to make even more potatoes. In a few growing seasons, what once was handled by Witherell and Babler in the Biotron now weighs hundreds of millions of pounds and requires the work of two dozen independent, certified farms to manage.

Along their journey, the potatoes are screened for diseases that might have crept in. Once Babler and Witherell leave the Biotron for the day (they don’t return, the better to keep from bringing in pathogens from outside), they work in Russell Laboratories, where they help run diagnostic tests on potatoes to screen for viral and bacterial infections. 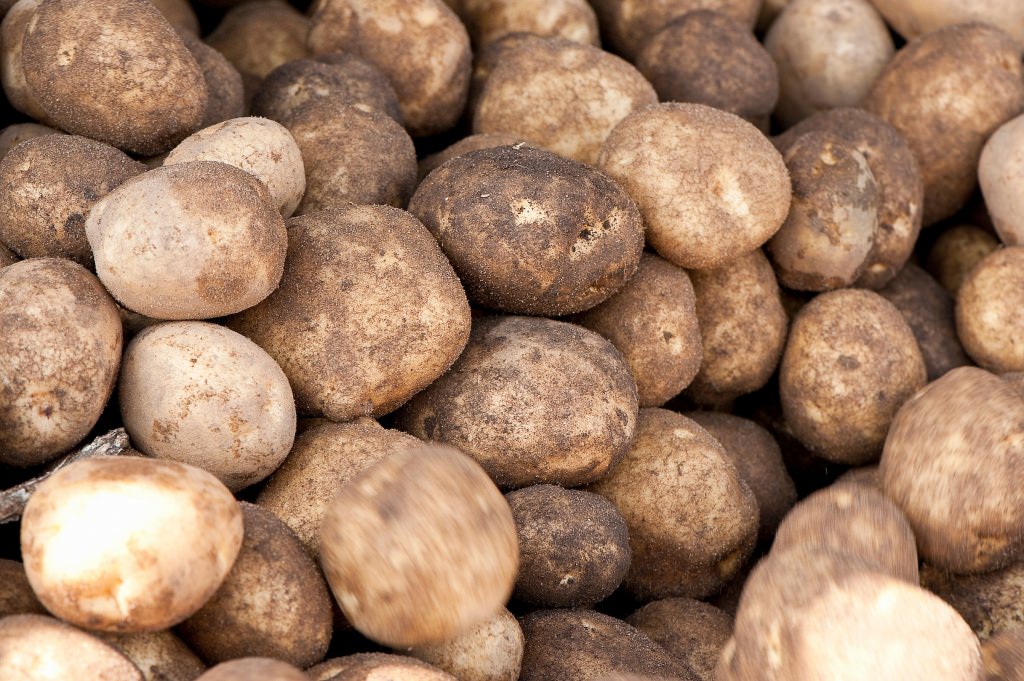 “Part of the certification process is to walk the fields and visually assess plants for the disease,” says Babler, a native of Viroqua, Wisconsin, who earned both her bachelor’s and master’s degrees at UW–Madison. “You can visually assess plants, but sometimes you can’t tell exactly what the disease is. So the inspectors ship the plants back to us and we do diagnostics throughout the growing season.”

As part of her research, Babler is developing an improved test for a relatively new potato disease, Dickeya. The bacteria can spoil up to a quarter of a farmer’s yield under the right conditions, and has recently taken hold in North America. Seed potato programs like the WSPCP are designed to detect and restrict the spread of new diseases like Dickeya, which spread primarily through infected seed potatoes.

Only those potatoes with a healthy pedigree get the WSPCP seal of approval. A portion of the sale of each bag of potatoes that commercial growers buy, certified to be as clean as possible, supports this years-long, labor-intensive process.

It’s a certification well worth the price — ensuring that Wisconsin potato growers continue to succeed, helping keep the state one of the top producers of potatoes in the country.