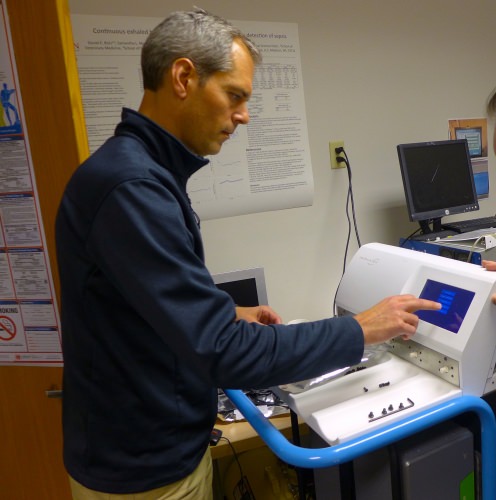 In the face of growing crises related to antibiotic resistance and hospital-acquired infections, a UW–Madison spinoff called Isomark is working to introduce a new infection-detection technology into hospital intensive care units.

Isomark’s system measures carbon isotopes in exhaled breath. Without even touching the patient, it can offer the earliest warning of severe bacterial infection, says founder Mark Cook, a professor of animal science at the University of Wisconsin–Madison.

In 2005, Cook, Warren Porter, a professor of zoology, nutritionist Dan Butz, and others formed Isomark to pursue their “hands-off” detection invention.

Isomark’s system can often spot a bacterial infection before the patient feels symptoms, raising the potential for faster, better treatment for severe infections. The company is focused on ICUs, which treat about 5 million people in the United States each year, and where sedation or breathing tubes can block communication about symptoms. 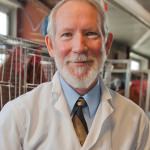 Antibiotic-resistant bacteria like MRSA (methicillin-resistant staph aureus) are an accelerating problem in hospitals, says company CEO Joe Kremer. “The average hospital stay is five days, but it’s 20 days with a hospital-acquired, resistant infection. The health-care industry puts the cost of diagnosis, treatment and the extended stay at $35 billion to $88 billion.”

These figures do not account for the pain, worry and deaths associated with these severe infections. As new antibiotics continue to lose effectiveness to evolving bacteria, ever-more stringent controls have not brought the problem to heel.

About 100,000 Americans die of a hospital-acquired infection each year, Kremer says.

When the immune system responds to an infection, subtle changes in the ratio of the common carbon 12 isotope and the rare carbon 13 can be detected long before a doctor, blood test, or often even the patient, knows that an infection is present. (Isotopes are chemically identical versions of an element that can be distinguished from their differing masses.)

After gathering breath samples and medical records from 100 ICU patients, Isomark saw a telltale change in the isotope ratio for each patient who became ill.  “Our studies show that we are 18 to 48 hours ahead of when clinicians suspect an infection,” Cook says. 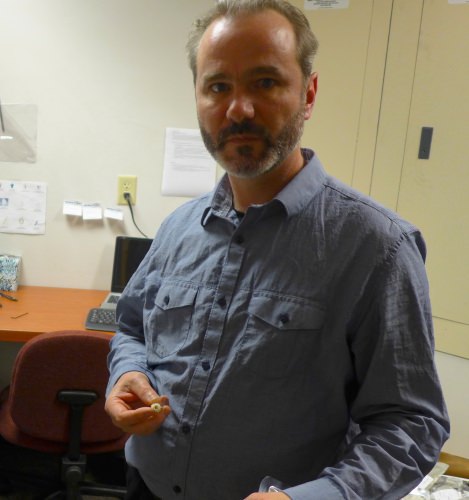 Dan Butz, a scientist at Isomark, a UW–Madison spinoff, holds a fitting that connects the sample container to Isomark’s analytical instrument. David Tenenbaum

Since the test measures non-radioactive isotopes in exhaled breath, the procedure is non-invasive and safe.

The testing process could hardly be simpler. The patient breathes into a bag (or a sample is grabbed from a ventilator). The bag is connected to the tester, the patient ID is punched in and results appear in 10 minutes.

The testing technology relies on principles discovered during the 1960s by W. Wallace Cleland, an enzyme scientist at UW–Madison, says Cook.  “During an infection, immune cells produce cytokines that rev up the immune system, causing the release of amino acids to support the immune reaction. The amino acids are burned for energy through a long chain of enzyme reactions that ‘discriminates against’ carbon 13, Cook says, changing the carbon 12/carbon 13 ratio in exhalations.

The change is only a few parts per million — but enough to be measured in a spectrograph. Until recently, the necessary instrument cost nearly $500,000; newer models are coming in at about $100,000, Kremer says. The lower price is key to the growing commercial potential of the procedure.

A telltale isotope ratio in not intended to govern the doctor’s decision to treat, Kremer says. “We are providing early information to the physicians; once they are alerted to the likelihood of an infection, they can decide to order blood tests or start antibiotics. We are an early warning system, not an automatic call to arms.”

Isomark has licensed the patent for Isomark’s technology from the Wisconsin Alumni Research Foundation.

Metabolic changes that skew the carbon isotope ration also occur during intense athletic training, Cook says. “During a trial with UW–Madison football players, the data were phenomenal. We could pick out those who weren’t getting enough calories, especially with twice-a-day workouts.”

Isomark is seeking FDA approval as a medical device, and is gearing up for a final “regulatory trial,” that will look at 300 patients in up to six hospitals nationwide. “We can’t be positive about the FDA’s decision, but they have been very positive,” says Kremer. A decision could arrive in January, 2018.

Although Isomark has an unusual technology, it faces a common startup challenge: money. “Despite the solid data we already have, the biggest hurdle is to attract the investment dollars to get it done,” says Kremer.