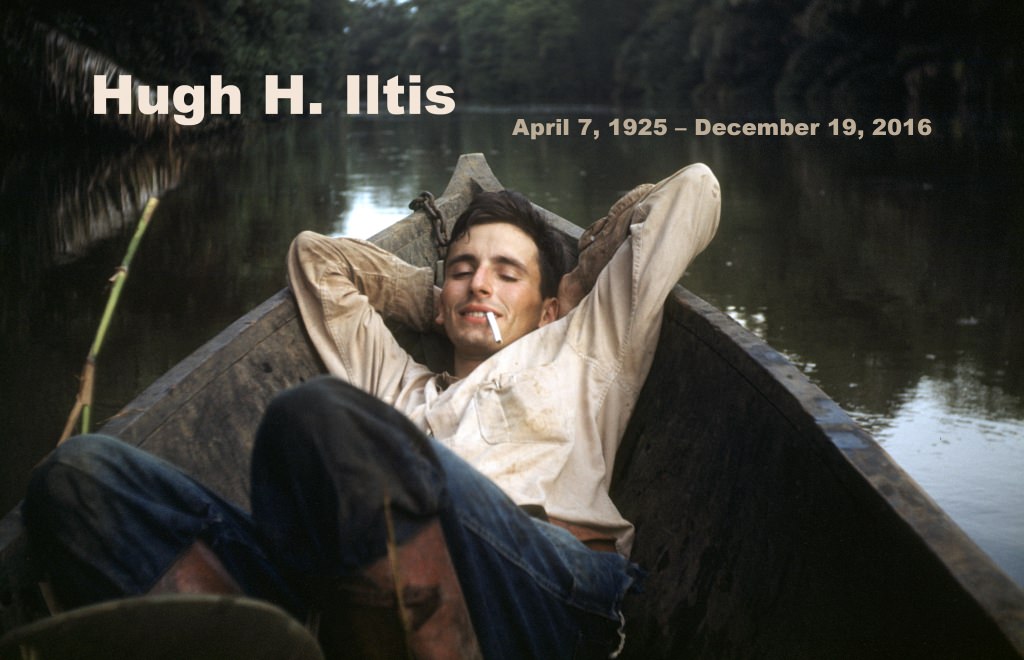 Hugh H. Iltis, a noted University of Wisconsin–Madison plant geographer, educator, conservationist and mentor to botany students from across the Americas, died in Madison on Dec. 19.

Passionate, articulate, informed, Iltis was opinionated, sometimes argumentative, but always a fearless defender of the natural world he revered.

Having recognized early the accelerating rate of ecological destruction in the mid-20th century, he helped found the Wisconsin branch of the Nature Conservancy in 1960 and inspired other projects in Wisconsin, Hawaii and Mexico.

An inveterate teacher, he would transform a visit to the Botany Department greenhouse into an impromptu grilling of a graduate student: “What’s this flower’s family?” 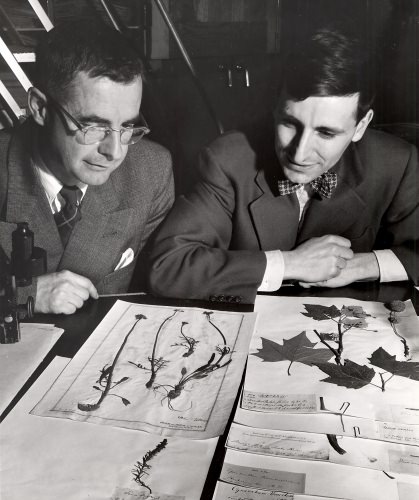 Iltis and colleague John Thompson in the herbarium, studying a “sheet” – a dried plant like those used for centuries to definitively identify plant species. Late 1950s. Archive image

“If you’re a friend of his, you are, by default, a student of his because not a moment goes by when you aren’t learning something,” says Shelly Hamel, who in 1988, inspired by Iltis, established a 120-acre ecological restoration north of Westfield, Wisconsin with her husband, David.

“We have dedicated our retired lives to its restoration and management,” Hamel says. Proudly, she notes that the federally-endangered Karner blue butterflies have increased two hundredfold at the site, which was named the Hugh Iltis Prairie and Savanna in 2007.

Concerned with nature’s beauty, fragility and preservation, Iltis was one of the first scientists to propose what was later popularized as the “biophilia hypothesis”: the notion that psychological health depends on the trees, flowers, butterflies and sunlight in which our ancestors evolved.

A dramatic teacher, Iltis often began classes by noting ecological issues in the headlines. “Hugh was unrestrained in his criticism of individuals and institutions that threatened the environment,” says Stanley Temple, UW–Madison Beers-Bascom Professor Emeritus in Conservation and noted ornithologist.

“His annual guest lecture in my biodiversity class was always packed with gibes at religious leaders for opposing population control, politicians for shortsighted, environmentally damaging world views, industry for being greedy, and anyone else for being ignorant. He finished each lecture by admonishing students ‘to be a good ancestor’ and leave a better world for future generations. Hugh’s life was certainly guided by that maxim.” 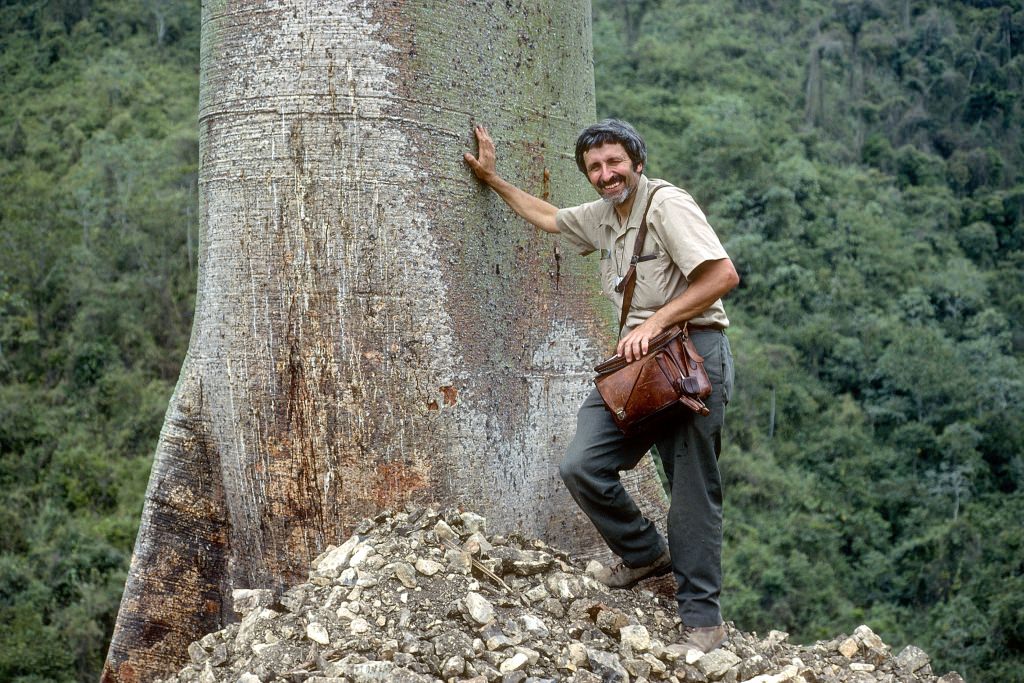 Iltis next to the huge trunk of a Ceiba (Bombacaceae) tree west of Guayaquil, Ecuador, 1977. Archive image of Hugh H. Iltis

As a taxonomist, concerned with plants’ nomenclature and evolutionary relationships, Iltis took part in old-school “whole organism” biology. In 2000, for example, he and longtime collaborator Ted Cochrane published “Atlas of the Wisconsin Prairie and Savanna Flora.”

As director of the University of Wisconsin Herbarium (now the Wisconsin State Herbarium), Iltis helped build one of the nation’s top research collections of pressed plants. The herbarium now has more than 1.3 million specimens, mainly from the Americas.

As a plant explorer, Iltis led expeditions to Mexico, Guatemala, Peru and Ecuador. His expertise focused on the corn and caper families, but he collected broadly. For example, he discovered two of the 13 species in the tomato genus, including one that proved to have a trait sought in the canning industry.

Passionate, articulate and informed, Iltis was opinionated, sometimes argumentative, but always a fearless defender of the natural world he revered.

Curious, contentious, fierce and tireless, Iltis was born in Brno, Czechoslovakia in 1925. He began collecting plants from an early age. His father, Hugo, a botanist and educator, wrote the definitive biography of Gregor Mendel, the founder of genetics. The elder Iltis was also a Jew and left-wing political activist who repudiated Nazi eugenic “science” by writing “Mythos of Blood and Race,” a book that made him a marked man.  He considered suicide, but colleagues (including Albert Einstein) helped by securing him passage and a teaching job in the U.S.

In 1938, first Hugo and then his family managed to escape. Decades later, Hugh recalled hearing the harsh demand for “passports!” in their harrowing train trip across Germany. The family made their way to Virginia to accept the job that may have saved them.

Later in World War II, Iltis, a native German speaker, joined the U.S. Army, where he was soon interrogating Nazi prisoners — including SS leader Heinrich Himmler and others awaiting the Nuremburg trials. 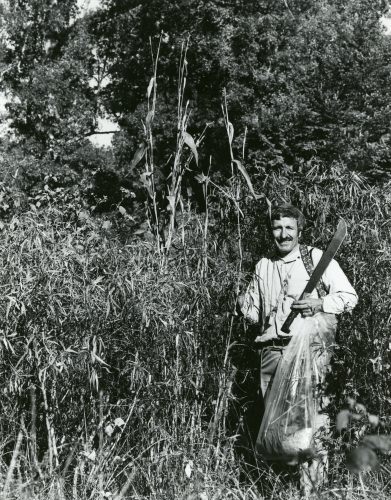 Iltis the botanical explorer on the edge of a fir-oak cloud forest atop Sierra de Manantlan in Mexico, with the newly discovered perennial relative of corn, circa 1978. Photo: Michael Nee

After graduating from the University of Tennessee, Iltis received a Ph.D. in botany from the Missouri Botanical Garden in St. Louis. In 1955 he joined the Botany Department at UW–Madison as director of the herbarium.  He soon became involved in the politics and ecological consciousness of the era.

In 1968, he helped make Wisconsin the first state in the nation to ban the pesticide DDT, which was exterminating the bald eagle. Iltis pressed Hawaii to protect more natural areas in a tropical island state subject to manifold biological pressures. These efforts paid off when Hawaii passed the Natural Areas law in 1970.

“Hugh was an inspiration to his students and colleagues, especially for the personal example he set in his deep commitment to studying, understanding and protecting nature,” says Don Waller, John T. Curtis Professor of Botany and chair of the conservation biology major at UW–Madison. “He was our conscience and he welcomed and encouraged a remarkable stream of students and colleagues through his career, always leaving us enriched in knowledge and wisdom.”

After days spent cataloging plants, teaching about them, and attempting to divine their evolutionary heritage, Iltis planted and tended obscure species outside his house on the edge of the University of Wisconsin Arboretum. The gift of the stunning, smoky pink queen of the prairie would, characteristically, include an exposition of the plant’s place in nature (its plant geography) and a personal story: Iltis had salvaged that specific plant’s ancestors just before their home was scraped clean by a bulldozer. 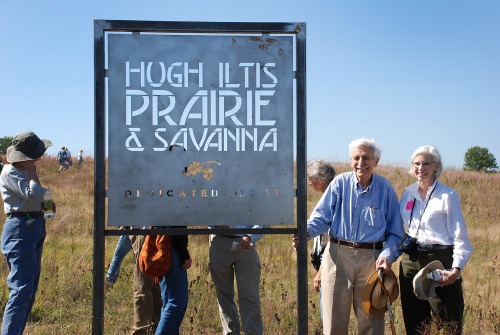 Hugh Iltis and Sharyn Wisniewski at the dedication of the Hugh Iltis Prairie and Savanna, north of Westfield, Wisconsin, 2007. Courtesy of Shelley and David Hamel

To Iltis, plants represented stories and places. And they embodied the evolutionary web of their ancestors — and their descendants — assuming they could survive “progress.”

All these issues converged in the mountains of Western Mexico 30 years ago in a story that was initiated in large part because Iltis had annoyed a botanist at the University of Guadalajara. It’s a story Iltis never tired of telling, and it reflects his infectious enthusiasm for the natural world, the key roles of chance and perseverance, and a deep knowledge of plant biology and relationships.

For decades, Iltis sent a botanical New Year’s card. The 1976 version, as always, was a message to the Earth, and to “all its flowers, birds, and children, both young and old, and to you — A Happy New Year 1976, Hugh Iltis.”

The card portrayed a perennial species of teosinte — an ancestor of corn — and described it as “extinct in the wild.” Iltis, who said he’d been “schooled in corn since I was able to walk” by a father who was also intrigued by it, had searched for the plant on botanical expeditions to Central and South America. Although these journeys had produced streams of plant specimens and new species, perennial teosinte was never found.

However, the card reached Luz Maria Villarreal de Puga, a botanist at the University of Guadalajara, who challenged her students to prove Iltis wrong. One, Rafael Guzman, did exactly that, querying farmers until he found the teosinte — or so he thought — high on Sierra de Manantlán, near Guadalajara. 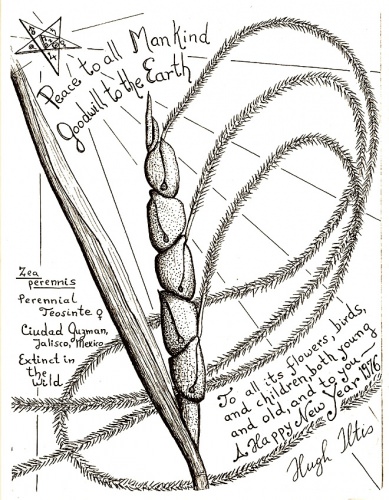 Iltis knew nothing of the story until a handwritten letter reached the herbarium from a messenger in New York City. Was he interested to hear about a friend who “had found the original corn plant”?

Indeed! And by 1978, Iltis was riding a horse up the mountains until he, too, saw the plants Guzman had located. They turned out to be teosinte, but actually an undiscovered species. The new teosinte was a perennial. It resisted a series of viruses that afflict corn, and it could crossbreed with the corn crop. If this teosinte could be crossed and make a commercial strain of corn, the plant would offer great environmental advantages in preserving soil and reducing fuel use.

With this promise, the find appeared on the front page of The New York Times in 1979. And it triggered a movement to set aside teosinte’s homeland — now embodied in the Sierra de Manantlán Biosphere Reserve, covering nearly 540 square miles.

Completing the cycle, Iltis put the newly discovered species on his New Year’s card in 1979.

Iltis also strove to build what he considered to be vital connections between UW–Madison and Mexico. He encouraged Guzman, the discoverer, and other Mexican botanists to attend UW–Madison, sometimes offering rent-free residence at his home near the Arboretum while they studied. 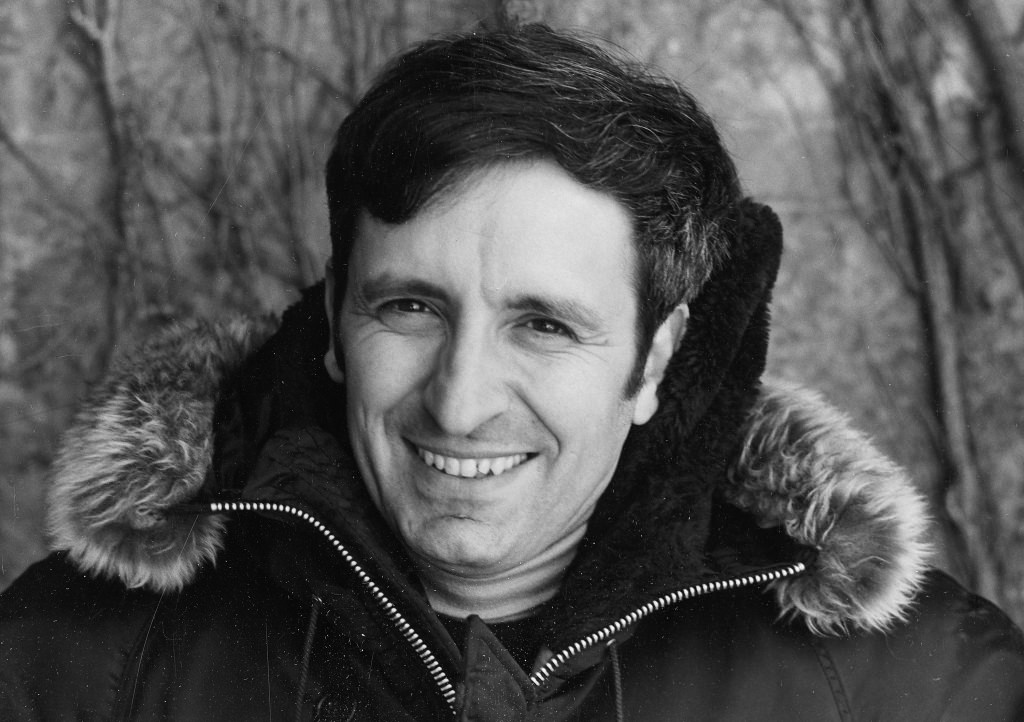 Iltis, with a new coat, prepares for a series of lectures in Alaska in 1970. Archive photo of Hugh H. Iltis

Like many of those Mexican students, Antonio Vazquez took part in the early teosinte explorations and the establishment of the Sierra de Manantlán reserve, which is administered by the University of Guadalajara — an institution that conferred an honorary Ph.D. in 2007.

Currently, Vazquez specializes in magnolias, the tree genus he studied at Wisconsin. Like his mentor, he sees habitat preservation as an inseparable part of botanical science. “Dr. Hugh Iltis was an outstanding thinker and everyday warrior declaring the war on ‘unlimited human ignorance and stupidity’ in favor of the environment and the natural world,” Vazquez says.

“We all learned from him much more than we can acknowledge, and we are now expected to carry on and pass on his vision and the tales of his admirable life to present and future generations.”

Iltis was predeceased by Sharyn Wisniewski, his third wife, and is survived by sons Michael, David, Frank and John. A celebration of his life is being planned.