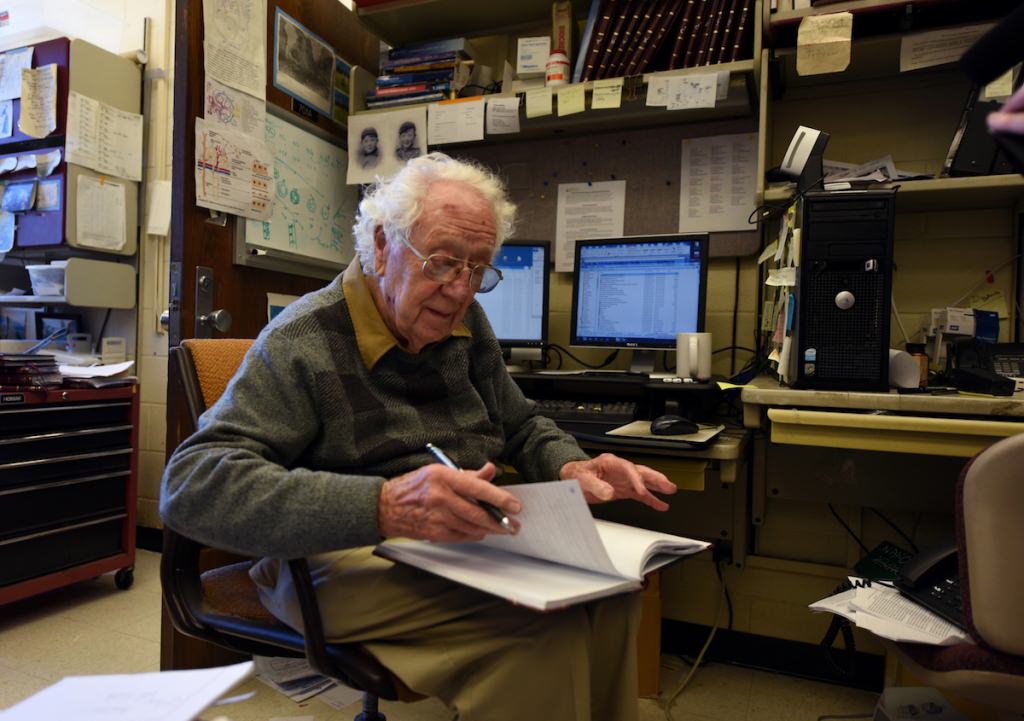 Oliver Smithies, the biologist whose gene altering techniques revolutionized modern genetics, scours a notebook in this recent photo. Smithies, who died Tuesday after a short illness, was a member of the UW–Madison faculty from 1960 to 1988. Photo: University of North Carolina at Chapel Hill

Oliver Smithies, who shared the 2007 Nobel Prize for his work enabling scientists to manipulate DNA in a way that allowed the addition or subtraction of genes from the genome of a mouse, died on Tuesday (Jan. 10, 2017), in Chapel Hill, North Carolina. He was 91.

Smithies was recognized by the Nobel committee along with with University of Utah researcher Mario R. Capecchi and Briton Sir Martin J. Evans. Working independent of Capecchi and Evans, Smithies devised a technique that involved introducing a desired genetic change into a mouse by injecting altered stem cells into mouse embryos. Mice born of the altered embryos could then be bred to produce progeny with altered genes.

Much of the work for which Smithies was recognized was performed at UW–Madison.

“One of my proudest accomplishments was helping to attract him here,” the late UW–Madison genetics Professor James Crow said in a 2007 interview. “Everything he did had a characteristic touch of originality. Actually, just before he left here he did the major piece of work” that led to his Nobel Prize in Medicine or Physiology.

“What is not generally appreciated is how much he loved to teach. … It gave him reasons to scour the old and new literature, to make novel connections between disparate fields, to ‘think out loud.’ Most of all, it gave him great joy.”

The work revolutionized mammalian genetics, allowing scientists to study thousands of different genes and their effects, providing powerful insight into genetic mutations and changes that underpin disease and health.

“Gene targeting has pervaded all fields of biomedicine. Its impact on the understanding of gene function and its benefits to mankind will continue to increase over many years to come,” according to the Nobel citation recognizing Smithies, Evans and Capecchi.

“Oliver was the quintessential scientist,” says Jerry Yin, a UW–Madison professor of genetics. “He loved asking big questions, the process of trying to answer parts of the questions, positive results, and the process of overcoming experimental barriers.

“What is not generally appreciated,” Yin adds, “is how much he loved to teach. For him, teaching was an intimate part of the process of scientific discovery. It gave him reasons to scour the old and new literature, to make novel connections between disparate fields, to ‘think out loud.’ Most of all, it gave him great joy.”

The British-born Smithies, the son of an insurance salesman and a teacher, was also known for his invention of gel electrophoresis, a method for protein separation. His method utilized a gel made from potato starch and was easier, cheaper and more accurate than existing methods. The technique remains in widespread use in biology.

“One of my proudest accomplishments was helping to attract him here. Everything he did had a characteristic touch of originality.”

The gene altering technique devised by Smithies, Evans and Capecchi made the field of genetics experimental. Before, it was dependent mostly on statistics to reveal the effects of individual genes on health and well-being.

“Oliver’s work speaks for itself,” says Yin. “Starch gels paved the way for modern polyacrylamide gels, a technique that almost every single molecular biologist routinely utilizes. Gene knockouts have become one of the standard ways to understand how a gene functions in the behaving animal in health and disease.”

Using a portion of his Nobel Prize award, Smithies paid tribute to UW–Madison and three other universities where he studied and worked by underwriting symposia featuring some of the world’s top biologists. The idea, he said at the time the symposia were announced, was to help expose students to some of the brightest minds in science.

Smithies died after a short illness. His death was announced by the University of North Carolina at Chapel Hill, where he was the Weatherspoon Eminent Distinguished Professor of pathology and laboratory medicine.