Aldo Leopold’s words once again broadcast to the state 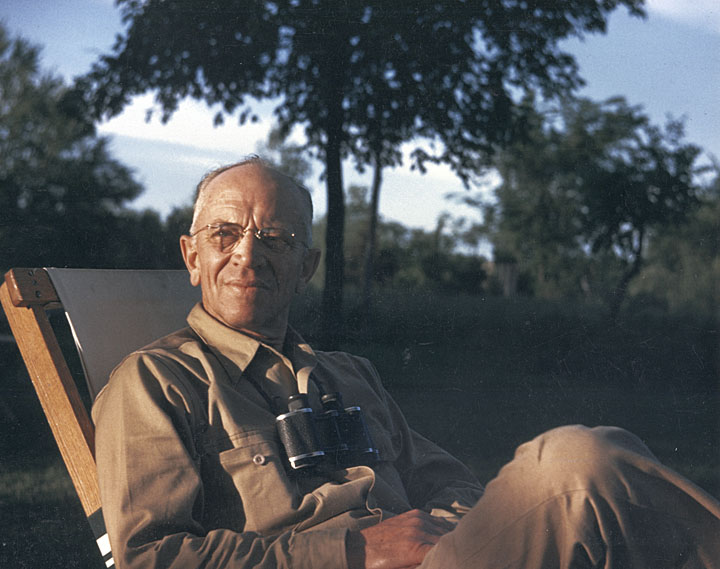 Aldo Leopold circa 1947. Leopold’s radio addresses were early reflections on the land ethic, his philosophy of how to live in harmony with nature, which he detailed later in “A Sand County Almanac.” Photo: Aldo Leopold Foundation/UW Archives

In celebration of Earth Day, Wisconsin audiences will once again hear portions of conservationist and former University of Wisconsin–Madison professor Aldo Leopold’s radio addresses that originally aired more than 80 years ago on WHA, which is now a part of Wisconsin Public Radio.

Although no known recordings of Leopold’s voice survive, UW–Madison conservation professor emeritus Stan Temple, who once held Leopold’s faculty position at the university and is now a senior fellow at the Aldo Leopold Foundation, will read excerpts from the original transcripts. Leopold’s ideas outlined in these broadcasts went on to influence generations of conservationists and establish the science and tenets of modern wildlife management. 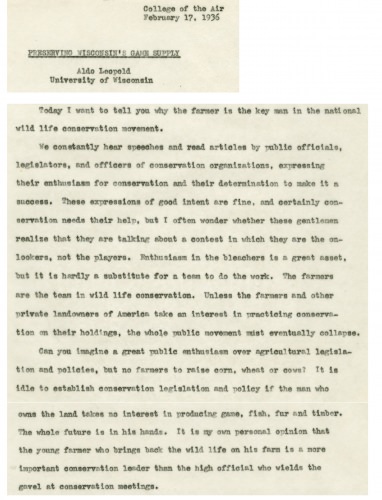 Leopold’s radio addresses spoke directly to farmers, making only passing references to city dwellers and their inability to do much for conservation beyond “making speeches.” UW Archives

Leopold’s radio addresses were early reflections on the land ethic, his philosophy of how to live in harmony with nature, which he detailed later in “A Sand County Almanac.” They were intended primarily for farmers, using radio to reach audiences across the state in an expression of the Wisconsin Idea. In them, Leopold encouraged rural landowners to set aside and manage natural habitats to promote wildlife for both private and public benefit.

The interview with Temple about Leopold’s radio addresses and his readings from the transcripts will air at 4 p.m. on Sunday, April 23, on “University of the Air” on WPR. Leopold originally presented his talks during the predecessor program, “College of the Air,” from 1933 to 1936. Excerpts will also be broadcast periodically on Wisconsin Life, WPR’s series of essays on the culture of the state.

Just weeks after he joined UW–Madison as the chair on game management, Leopold turned to radio to fulfill an obligation toward outreach and extension work. In his first address, on Sept. 8, 1933, titled “Building a Wisconsin game crop,” Leopold entreated farmers to manage their properties to sustain and increase wildlife populations. By couching wildlife management in agricultural terms of raising crops, Leopold aimed to communicate with farmers in their own language. 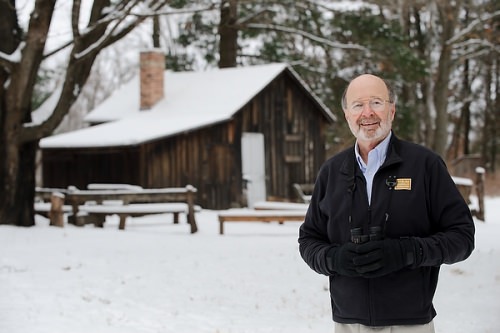 Stan Temple, emeritus professor of forest and wildlife ecology and senior fellow at the Aldo Leopold Foundation, is pictured in the snowy woods near the historic Aldo Leopold Shack in rural Baraboo, Wisconsin. Photo: Jeff Miller

“Leopold’s way of linking agriculture to wildlife management came out of his realization that most of the land on which wildlife could potentially live is farmland,” explains Temple. “So, his approach was a perfect fit for the College of Agriculture.”

The radio addresses talked directly to farmers, making only passing references to city dwellers and their inability to do much for conservation beyond “making speeches.” For Leopold, farmers and other rural landowners had all the agency. In an address on Sept. 10, 1936, he wrote, “The farmer who gives them (birds) food and cover is a more important conservationist than all the speechmakers in Christendom.”

“Leopold’s paradigm-shifting idea was that wildlife was not going to respond to the prescription of the day, which was protection,” says Temple. “After all his life experiences, especially after years traveling around the upper Midwest looking at the situation, Leopold realized protection alone was not enough — wildlife needed habitat.”

Although Leopold’s radio addresses were recorded on fragile transcription disks, they were not maintained in central archives and have been lost. Temple is leading an effort to find any of the lost disks in hopes of obtaining what would be the only recordings of Leopold’s voice. The transcripts were retained by the Department of Forest and Wildlife Ecology and can be viewed in the Leopold archives. 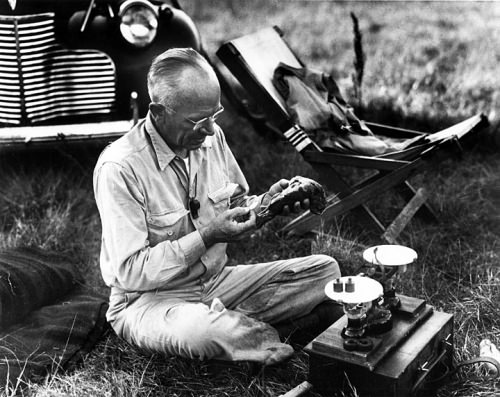 “With it being the celebration of the 100th anniversary of Wisconsin public radio broadcasting this year, it also seems like a great chance to look back at the history of the radio station as a vehicle for education,” says Emily Auerbach, one of the hosts of “University of the Air,” of the occasion to revisit Leopold’s radio addresses. Auerbach, a UW–Madison professor of English, also teaches “A Sand County Almanac” in her course on wilderness literature.

“You can see him very shrewdly in these excerpts thinking about his audience and trying to think about how to get them on board with the revolutionary idea of conservation and ecology,” says Auerbach.

“There’s just this excitement when you find another piece of someone you’re trying to understand from the past.”