A team from the University of Wisconsin–Madison is one of the top winners in the $5 million XPRIZE for Carbon Removal Student Competition. The contest is kickstarting projects that could mitigate the impacts of climate change by removing carbon dioxide from the air, ground and oceans.

The UW–Madison team will receive $250,000 — the largest available award in the student competition — to fund further work on their plan to take carbon dioxide, the most common greenhouse gas, out of the air and seal it away where it can’t contribute to rising global temperatures.

“We are really excited about our technology, and it’s cool to be working on something that has the potential of scaling up in a big way and actually have an impact,” says team leader Keerthana Sreenivasan, a graduate student in civil and environmental engineering.

The prize announced today is part of the larger $100 million XPRIZE for Carbon Removal supported by the Musk Foundation, a nonprofit research foundation established by entrepreneur Elon Musk. The multiyear global competition is designed to fund early-stage carbon removal concepts and encourage teams to “build real systems that can make a measurable impact and scale to a gigaton level,” Musk says.

A gigaton is 1 billion tons. The United Nations says in 2019 alone, global emissions reached the equivalent of 59 gigatons of carbon dioxide.

With its new funding, the UW group can develop its project for future rounds of the competition. 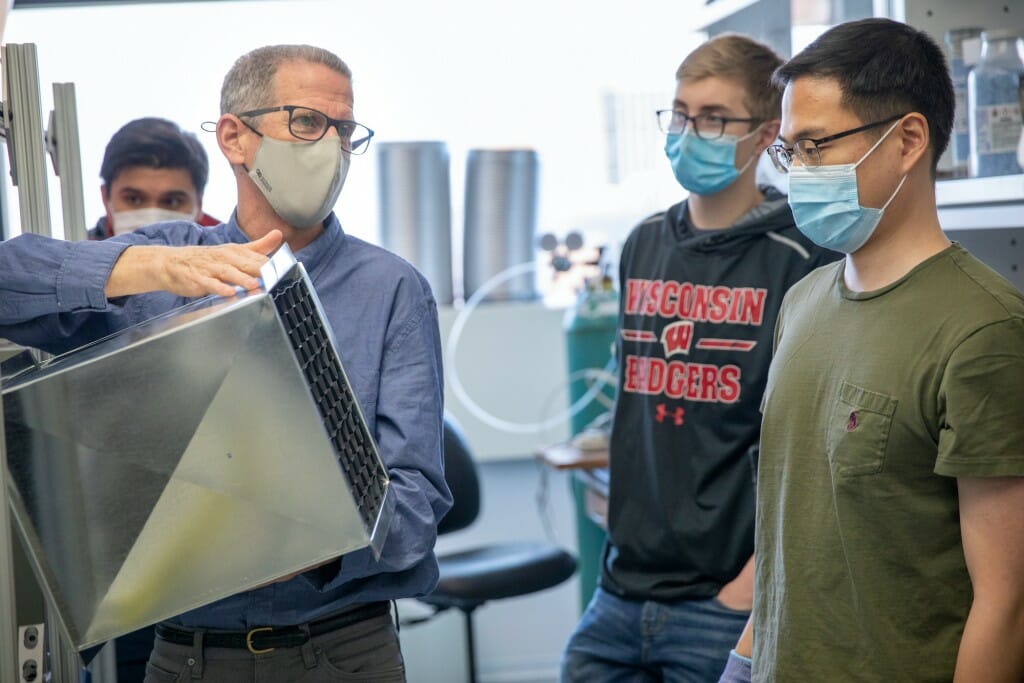 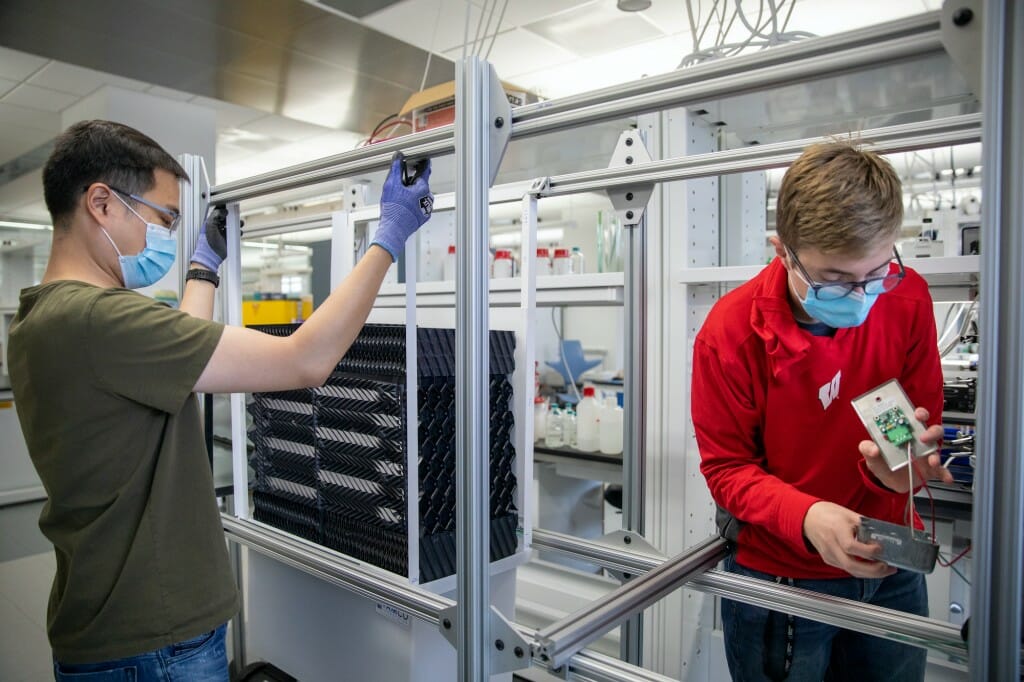 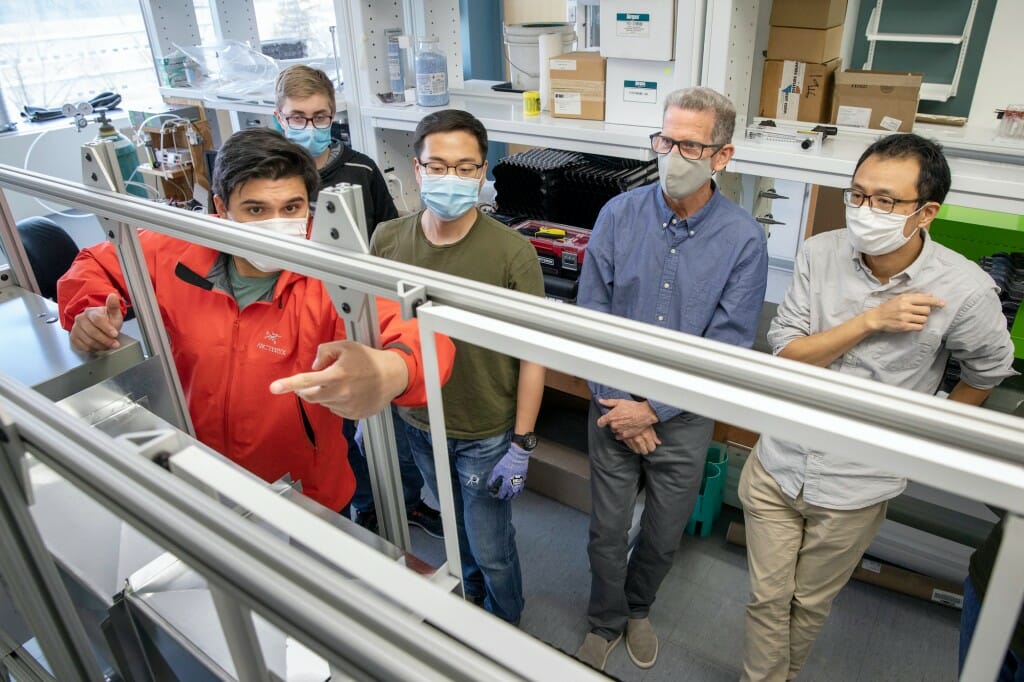 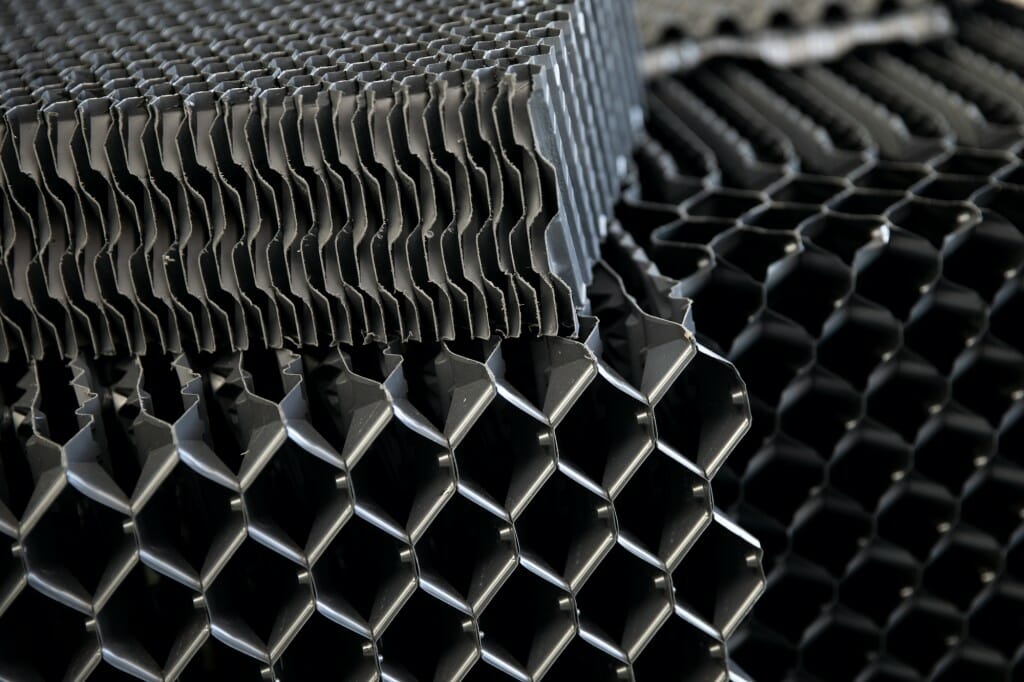 Detail of the packing materials used in a direct air capture (DAC) unit being developed by a UW–Madison team in a lab at the Wisconsin Energy Institute. Photo by Michael P. King/UW-Madison CALS 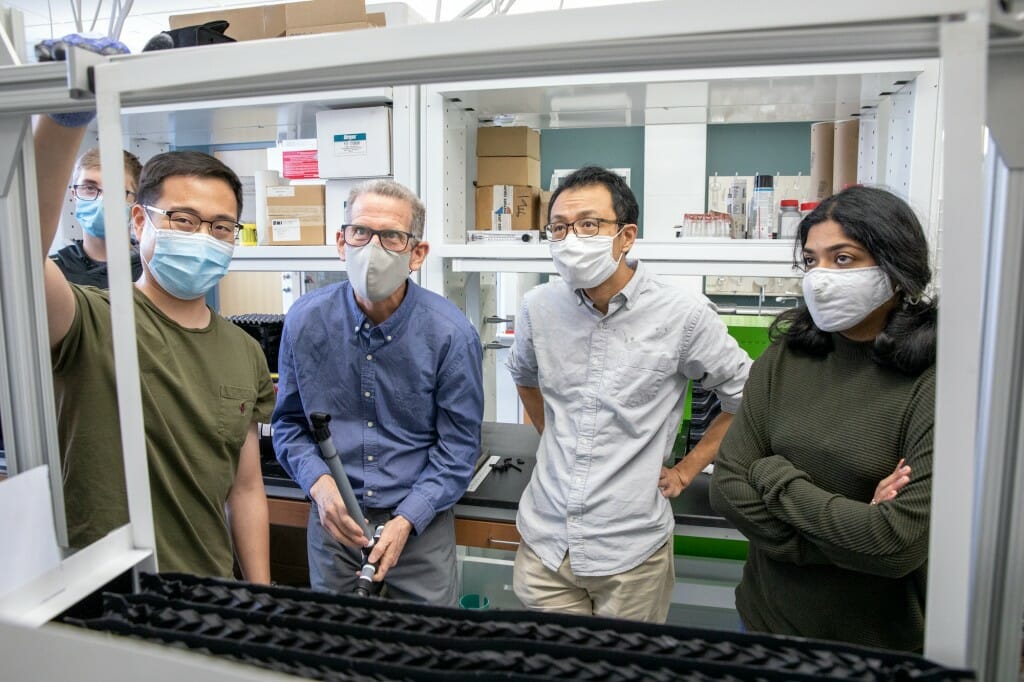 The team is developing a two-part system that consists of a direct air capture (DAC) unit that traps carbon dioxide from the air, plus a carbonization component that converts the captured CO2 into limestone particles. It’s an idea Anex and Wang have long discussed.

“Bu and I had been working on the basic concept for a while, and then XPRIZE for Carbon Removal came around, which is really about taking an idea and being able to turn it into an engineering system that works and scale that up,” says Anex. “Then we talked to some of our students, and they decided that they should come up with a team.”

Team member Seunghyeon Jung, a PhD student in biological systems engineering in CALS, has been focusing on building the team’s lab-scale DAC unit, which relies on specialized materials and a simple chemical reaction to capture CO2 from the atmosphere.

“We flow a hydroxide solution over the packing material while blowing air over the surface in a horizontal way,” says Jung. “The chemical reaction on the surface captures carbon in the form of carbonate ions.”

From there, the carbonate solution goes into the carbonization component, where it is combined with ash or slag, byproducts of industrial furnaces like those in coal-fired power plants or steel mills. What comes out is a carbonated powder that includes fine limestone and activated silica particles, which can be used in construction to replace cement. A hydroxide byproduct of the limestone-forming step is recycled back into the DAC unit to capture more carbon dioxide.

“In essence, we’re converting carbon dioxide from the air into carbonate minerals that can be upcycled into construction materials, all under ambient conditions,” says Wang, who holds a patent related to the carbonization part of the system.

The DAC unit resides in Anex’s lab in the Wisconsin Energy Institute on the UW–Madison campus, while the carbonization component is housed in Wang’s College of Engineering lab, which means shuffling reaction products back and forth between buildings. It won’t always be that way. The plan is to combine the parts, hooking them together to close the loop.

As the team moves forward in the XPRIZE contest, which runs through Earth Day 2025, members will further refine their system, figure out how to scale it up, and develop a plan for its implementation.

“To succeed will require a variety of skills like data modeling, public policy, social science and science communication,” says Sreenivasan. “So we need different people with different areas of expertise to get what we need done.”

This need is reflected in the composition of the team, which includes six graduate students from across UW–Madison’s campus, representing the College of Agricultural and Life Sciences, College of Engineering, College of Letters & Science, and Nelson Institute for Environmental Studies. The team recently added two undergraduate students to help with lab work and data analysis. For those involved, notes Anex, there’s a value beyond competing and succeeding in the XPRIZE competition.

“Students learn a lot about building things, running experiments, working in teams and making presentations. And they gain a lot of experience and maturity,” he says. “Some of these students might make a career out of this. It’s an important problem and I’d love to see a bunch of them work on solving some of the big environmental problems that face the world.”

That’s Sreenivasan’s goal. She took an entrepreneurship course through the UW Discovery to Product program, and she is bringing the lessons she learned to the team’s efforts.

“The goal is to commercialize the process,” she says. “We’re trying to get it to a start-up.”