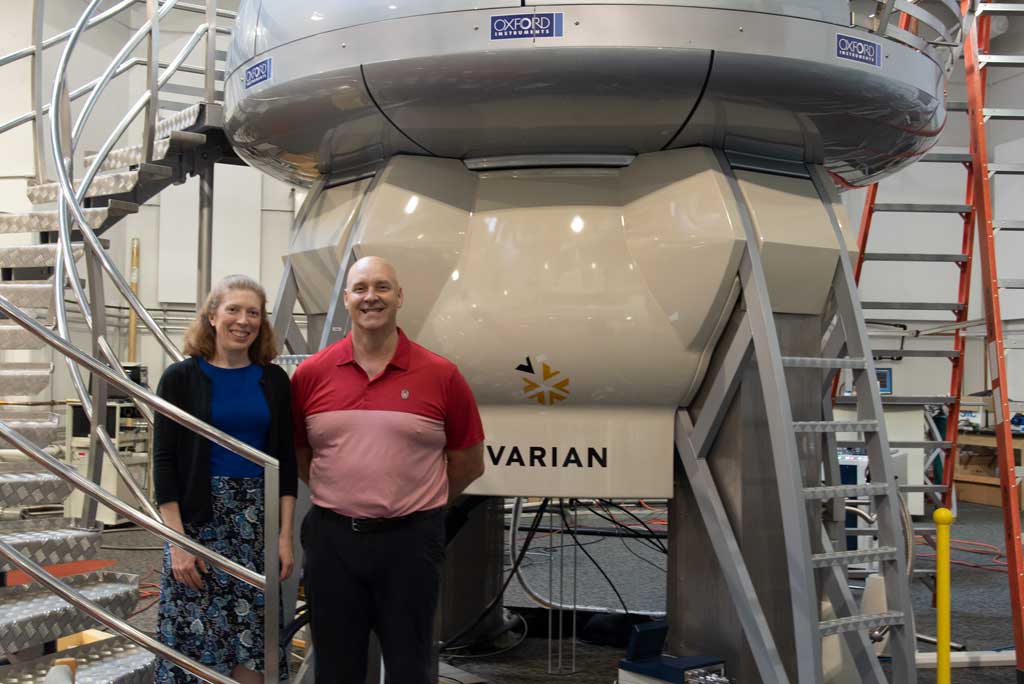 UW–Madison biochemistry professors Katie Henzler-Wildman and Chad Rienstra, co-directors of NMRFAM, will lead the installation at UW–Madison of the first of two new NMR spectrometers planned for NAN. Photo by Robin Davies

The University of Wisconsin–Madison will join a first-of-its-kind collaborative network for nuclear magnetic resonance spectroscopy, which researchers use to probe large biological molecules like proteins and RNA.

UW-Madison biochemistry professors Katie Henzler-Wildman and Chad Rienstra, co-directors of NMRFAM, will lead the installation at UW–Madison of the first of two new NMR spectrometers planned for NAN, the first of their advanced 1.1 GHz type in the United States available for shared use.

NMR can describe the structure and interaction of complex molecules by using magnetic fields to measure the orientation of the nuclei in the molecules’ atoms. Applications are numerous, including elucidating interactions between drugs and drug targets and aiding in the search for new antibiotics.

The UW–Madison biochemists, with colleagues Jeff Hoch, professor of Molecular, Microbial, and Structural Biology at UConn School of Medicine, and biochemistry and molecular biology professor Art Edison of Georgia, will organize NAN to help scientist tap the shared NMR technology and make results available to other researchers.

Dissemination and accessibility of data is a major goal of the NSF grant funding NAN. NMR technology can be applied to solve diverse scientific problems in fields from biological sciences to material sciences to “metabolomics,” the study of molecules that fuel, signal and stimulate activity in living cells.

This diversity of applications and techniques is both a strength and a challenge. NMR lags other structural biology fields in standardizing workflows and archiving raw and processed data. The result is that the powerful technology remains generally limited to experts.

“We have a responsibility to be good stewards of the instruments, as well as of the data that’s obtained with the instruments,” says Rienstra. “There’s an acronym in data science: FAIR — findable, accessible, interoperable, reusable. It means if I were to pick up somebody else’s notebook, would I be able to make sense of it if they weren’t sitting there with me?”

The goal, for NAN-produced data, is to be able to answer yes to that question.

Instruments incorporated into NAN automatically archive the raw data they collect, linking it to information about the sample, the experiment, and other factors to make it findable, interoperable and reusable.

“It’s not written down because the experts already know it,” says Henzler-Wildman. “Knowledge bases will help users figure out which experiment is most appropriate to get the data they need, how likely it is to work for their particular sample, what kind of information they can get out of an NMR experiment, and how that can help solve their problem. Knowledge bases provide translations so we can bring outside users in and make the whole field more accessible.”

The project furthers NMRFAM’s role in pioneering techniques and commissioning state-of-the-art equipment to expand its broad user base.

“NMRFAM has a 37-year history of acquiring cutting-edge instrumentation at UW–Madison and making it available to scientists at all levels of expertise says John Markley, professor emeritus of biochemistry. “The 1.1 GHz NMR spectrometer and associated infrastructure funded by this award will enable NMRFAM to continue that legacy.”

Markley was critical in securing the grant that established NMRFAM in 1986, and served as its director until his retirement in 2020. He also served as head of the Biological Magnetic Resonance Data Bank, now housed at UConn, the lead institution in the NAN grant.

UConn will be responsible for managing data stewardship and developing new technologies for consolidating, organizing, annotating, sharing, and archiving the data. Georgia will house the other 1.1 GHz NMR spectrometer, this one dedicated to solution NMR spectroscopy of macromolecules, as well as small molecules for metabolomics and drug screening.

The three partner facilities have a combined 50 years of operational experience, space, infrastructure, and strong institutional support for establishing NAN. Once instrument installation and network connection has been completed, an open call for membership by shared NMR facilities will be issued, further expanding the reach of the project and the technology.

NSF funding comes from the agency’s Mid-scale RI-2 Program, part of the Foundation’s set of “Big Ideas” unveiled in 2016 — ten long-term research and process ideas that identify areas for future investment at the frontiers of science and engineering.