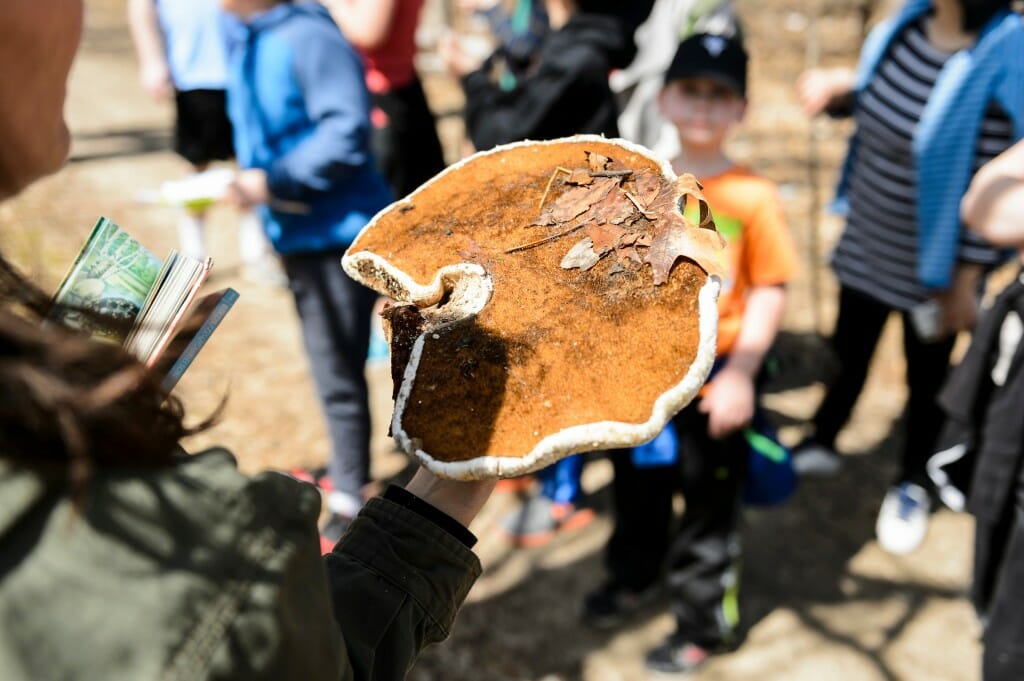 A birch polypore mushroom, a bracket fungi, found on a trail during a spring nature walk at the UW–Madison Arboretum in 2018. Photo: Jeff Miller

Few things alive on Earth occupy as little of our brain space as fungi. The vast majority of these organisms — neither plant nor animal — are invisibly small or perpetually hidden underneath our feet. Only when mushrooms breach the soil can we even see them.

Yet the impact of fungi is pervasive. They recycle essential nutrients into the soil and brew our beer. They devastate crops, threaten species, rot our food and infect our lungs. When eaten, some are delicious, others deadly, and some even alter our perception of reality.

Scores of scientists across the University of Wisconsin–Madison campus study the various ways fungi interact with us. Those explorations are the highlight of the 2021 Wisconsin Science Festival, taking place throughout the state Oct. 21­–24.

Like fungi themselves, sometimes fungal scientists fly beneath the radar. But don’t let that fool you, says Anne Pringle, a professor of botany who studies the ecology and evolution of fungi, including the deadly death cap mushrooms and the stunning Amanitas.

“There are very few places on the globe where you have the collection of expertise with fungi that we have at UW–Madison,” she says.

Fungi have a mixed reputation. On one hand, they can be beautiful — and delicious. They can even be transformative.

The so-called magic mushrooms, long recognized for their hallucinogenic properties, are now serious contenders for the next advanced treatment for depression and post-traumatic stress disorder. The School of Pharmacy’s new Transdisciplinary Center for Research in Psychoactive Substances is studying the mushrooms’ active ingredient, psilocybin, in clinical trials to treat these disorders.

But fungi have a dark side as well. Some mushrooms, like the death cap, are deadly when eaten, which makes foraging for wild mushrooms notoriously tricky. Other species can infect people, especially those with compromised immune systems.

But it might be fungal attacks on crops that do the most damage worldwide.

“Roughly 70% of all plant diseases are caused by fungi,” says professor Amanda Gevens, chair of the Department of Plant Pathology. “They’re costly in terms of reduction of yield and the quality of that yield, in both field production and in the post-harvest phase.”

The department commits a lot of resources to tamping down fungal diseases by researching individual pathogens in the lab and developing new means of attack. Many faculty also hold appointments in the Division of Extension, where they provide farmers with recommendations for preventing or treating crop-threatening diseases on their fields.

But even a department named for pathogens has discovered a more nuanced approach to fungi as the field has expanded to consider the entire microbial ecosystem.

“As technology has advanced and we’ve better understood communities of microbes in natural and agricultural ecosystems, we have a renewed admiration for fungi,” says Gevens. “There are fungi that engage with plants in very positive ways that enhance their health and that enhance the way they acquire and utilize resources, and some fungi that directly compete with plant pathogens to indirectly benefit plants. Our discipline increasingly recognizes the good that fungi provide.”

Unwilling to be put in a single box, fungi really are friend and foe alike.

“There are a lot of separate bubbles of mycology on campus,” says Megan McKeon, a graduate student in Christina Hull’s lab, a fungal-pathogen research group. McKeon and her peers are working to bring those bubbles closer together.

Mycology — the scientific name for the study of fungi — has no single home on campus. Instead, fungal researchers are spread across nearly every college and school. Although this organization extends the reach of fungal science, it makes community building more challenging.

Enter the Budding Mycologists, a new graduate student group formed in the last year. The group, a pun on the way yeasts reproduce by budding, brings together students from across campus to chat about lab work and unwind with likeminded scientists.

A former graduate student in the Hull lab started the group when the pandemic shuttered typical opportunities for socializing. McKeon and fellow graduate student Anna Frerichs took over organizing the group when the founder graduated. In some ways it mirrors the Fungal Biology Supergroup, a seminar series that organizes meetings among most of the fungal labs spread across campus. But Budding Mycologists is focused on the unique needs and interests of researchers just starting their fungal studies.

Scientists often wear different hats, says Frerichs. There’s a hat for your field, your department, your lab or the organism you study. By identifying a common fascination with fungi, the student group helps add to that wardrobe.

Budding Mycologists “is trying to build that community by saying we also have a little mycologist hat,” Frerichs says.

Years ago, before a renovation of the herbarium in Birge Hall, one collection sat all alone in a dark corner of the basement. You guessed it: the fungi.

“They were just stashed away completely obscure and unknown,” says Ken Cameron, a professor of botany and the director of the Wisconsin State Herbarium.

Though originally named for the plants they collect — and UW–Madison harbors more than one million plant samples — herbaria gather and study all kinds of vital specimens, fungi among them. But just like those in the wild, the preserved samples of fungi in herbaria are often overlooked.

“The collection is definitely underutilized,” says Cameron, who also studies the strange way that orchids use fungi for food. Fortunately, a recent grant helped them digitize the fungal collection, making it easier than ever to search from anywhere in the world. “Now people are becoming aware of what we have.”

The UW–Madison collection focuses on microfungi, so called because they are often visible as tiny specks on the plants they infect. But the herbarium also includes the world’s largest collection of lichens, organisms that are a bizarre symbiotic relationship between fungi and algae. UW–Madison botany researcher Thomas Nash even reported recently on yet another layer of complexity — fungi that infect lichens. The Wisconsin herbarium has 1,000 such samples.

One recent development favors the once-obscure fungal collection. The rise of easy DNA sequencing has helped researchers glean never-before-dreamed information from preserved herbarium samples. The genetic sequences can tell scientists how organisms evolved or even help them study extinct species in richer detail than ever before.

Lichens and microfungi are the focus of UW–Madison’s collection today in part because of a strange decision half a century ago. In the 1960s, the herbarium gave away its entire collection of macrofungi, better known as mushrooms, to the Field Museum in Chicago. Cameron says the real reason for this donation is lost to time but may have been influenced by the difficulty in preserving mushrooms and because the department lacked a mycologist at the time.

“Now that there’s a growing interest in fungi, I definitely see (the collection’s) potential being used again in the future,” says Cameron.