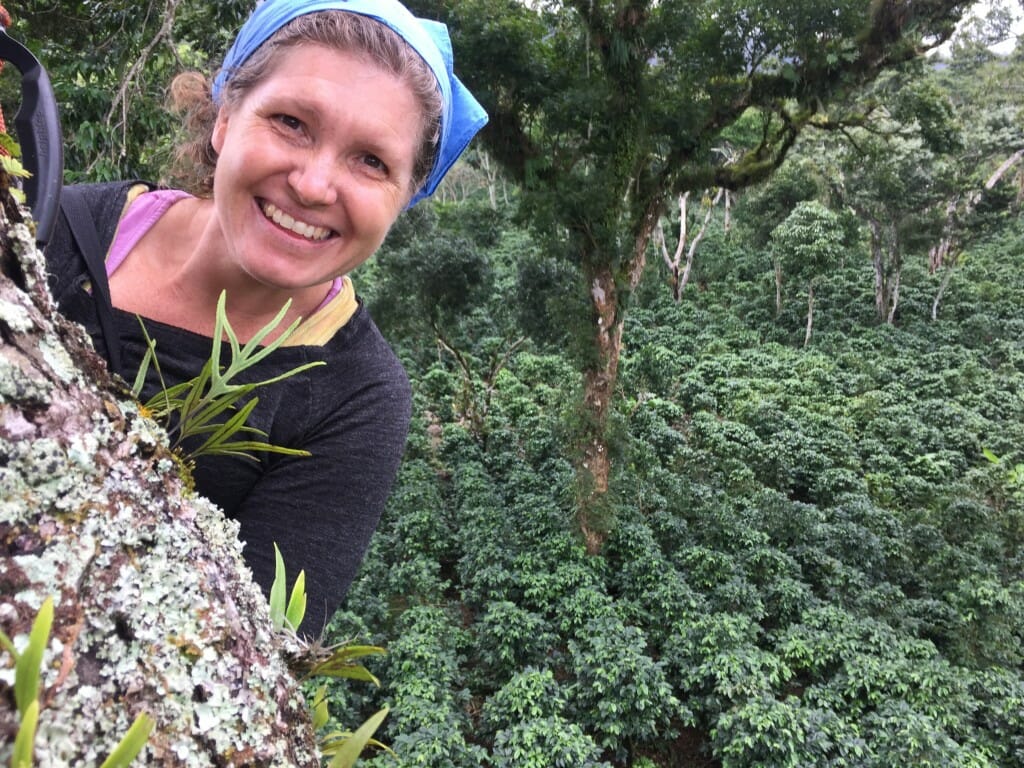 It’s easy to see how droughts, fires and other features of the environment alter and determine the shape of a forest, from the trees that compose it, to where and which trees grow and live together.

But another happenstance of nature plays an under-appreciated role in the overall make-up and health of forests: Lightning.

“Forests, globally, are getting younger. In general, we’re seeing the oldest trees in forests are dying for a variety of reasons and not being replaced,” says Jeannine Richards, a post-doctoral researcher in the botany department at the University of Wisconsin–Madison. “Lightning is one of these hazards that’s contributing to loss of large trees over time, and we’re just now realizing that it needs to be part of that list of drivers.”

Richards, in the lab of Professor Kate McCulloh, is co-author of a new study in Nature Plants that helps establish lightning as an environmental driver that may dictate what trees will make up tropical forests in the future.

Taking lightning seriously is important as some evidence shows the number of lightning strikes is increasing with climate change, meaning it could play a bigger role in forest disturbances and turnover of trees in the future. Better understanding lightning can also lead to the creation of improved climate models that help researchers study how the world’s forests may respond to changes in their environment.

For years, scientists have observed that tree species seem to respond differently to lightning strikes, but the effects of those strikes on forest composition had not been measured because lightning is hard to track and document.

Enter the specialized lightning monitoring system located in the Panama Canal-adjacent forests of the Barro Colorado Nature Monument. During storms, the monitoring system records images and timestamps of lightning strikes from four different towers located in the forest. Researchers, including Richards, are using photos of the same strike from multiple towers to triangulate the strike’s location and go out to document the damage. 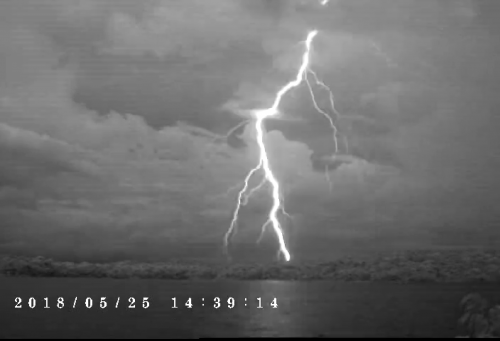 An image of a lightning strike captured by the Barro Colorado Nature Monument’s monitoring system.

When a strike occurs, the tallest trees sticking up from the canopy are the ones that are most likely to be directly hit. Unlike in a temperate forest like those typical in Wisconsin, however, it isn’t just a few trees that are damaged by a single strike. Up to 100 trees that are connected or close enough to the struck tree can be exposed to the electrical current, causing some to die instantly, others to die slowly, and still others to … carry on with business as usual.

The scientists expected each tree to have a different response to lightning based on an endless number of possible individual differences. While they did find this, they were surprised to also find a consistent pattern in which trees within the same species were responding similarly to one another.

They also found that tree species that are struck most often by lightning are usually the most tolerant, meaning they are less likely to die or have severe damage after a strike. Species that had denser wood also tended to be more tolerant of lightning strikes, especially if they had relatively larger vessels, a system of cells that help move water throughout a tree.

Palms were some of the most susceptible species in the study, almost always dying when exposed to lightning. Richards says that could be because of differences between some functional traits of palms and those of other trees, such as the way they grow and the architecture of their fronds. Their location in the understory of the forest means that they were not often exposed to lightning strikes, though. 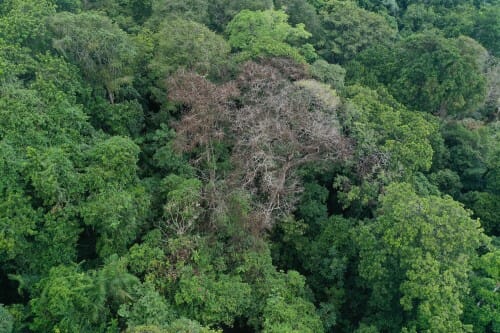 The tree species struck by lightning most frequently are also usually the most tolerant to lightning strikes. Image courtesy of Jeannine Richards

Richards says more studies need to be conducted to better determine which traits cause a tree species to be more or less tolerant of lightning, but she says this is an inspiring start.

For example, researchers already know that in places that experience regular droughts, species that need less water survive better than their counterparts. Similarly, where fire is frequent, species with thick bark can better withstand fire damage, and those that can resprout quickly after fire will tend to be more dominant in the community of species. Richards envisions the same kind of understanding with lightning.

For her, joining the project was exciting not only because it was understudied, but also because everyone has some sort of connection or reaction to lightning.

“Lightning is such a charismatic phenomenon. I remember going out as a kid and watching lightning storms with my dad on our front porch,” says Richards.

“There’s just so much that we don’t know about lightning,” says Richards, adding she hopes this research inspires other ecologists to join in the investigation.