The blood-brain barrier is the brain’s gatekeeper. A nearly impenetrable shield of cells, it keeps toxins and other agents that may be in circulating blood from gaining access to and harming the brain.

A critical anatomical structure, the barrier is the brain’s first and most comprehensive line of defense. But in addition to protecting the brain, it also is involved in disease and effectively blocks many of the small-molecule drugs that might make effective therapies for a host of neurological conditions, including such things as stroke, trauma and cancer. 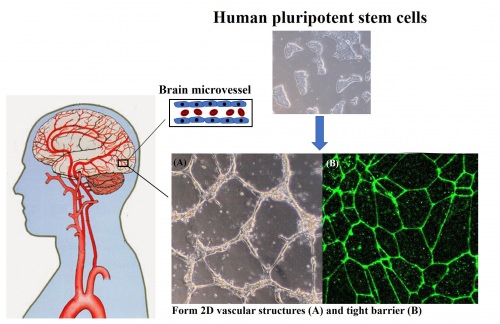 A team of UW–Madison researchers has developed a tightly defined, step-by-step process to turn multipurpose stem cells (top) into the cells that make the human blood-brain barrier (bottom), the anatomical feature that protects our brain from toxins and other threats that may be in circulating blood. Image: Tongcheng Qian, UW–Madison

Rudimentary models of the barrier have been created in the laboratory dish using human stem cells, but such models have depended on mixing a cocktail of cell types to elicit the complex chemical interplay that directs blank slate stem cells to become the endothelial cells that make up the blood-brain barrier.

In a report published this week (Nov. 8, 2017) in Science Advances, researchers from the University of Wisconsin–Madison detail a defined, step-by-step process to make a more exact mimic of the human blood-brain barrier in the laboratory dish. The new model will permit more robust exploration of the cells, their properties and how scientists might circumvent the barrier for therapeutic purposes.

“The main advance is we now have a fully defined process that uses small molecules to guide cells through the developmental process,” says University of Wisconsin–Madison Professor of Chemical and Biological Engineering Sean Palecek of the method that substitutes chemical factors for cells to push stem cells to become the brain endothelial cells that compose the blood-brain barrier. “It is fully defined. We know what components are acting on the cells” and at what stages of development.

To develop the new method for making the cells, Palecek collaborated with the laboratory of UW–Madison chemical and biological engineering Professor Eric Shusta. Tongcheng Qian, a Wisconsin postdoctoral researcher in chemical and biological engineering, led the study. The team has applied for a patent on the process through the Wisconsin Alumni Research Foundation, the not-for-profit organization that manages UW–Madison intellectual property.

In stem cell science, directing stem cells to become any of the hundreds of cell types that make up the human body is often as much art as science. By identifying specific chemical molecules that can chaperone the cells through the various stages of development to become the brain endothelial cells, the Wisconsin team, in effect, provides a recipe to standardize making the cells in quantities useful for research and things like high-throughput drug screens.

“Other approaches require mixing and co-culture of other cell types,” explains Shusta. “This will enable the non-expert to deploy the model. It’s an off-the-shelf recipe.” Using induced cells, adult cells from patients, which are reprogrammed to an embryonic stem cell-like state, will also allow researchers to better understand the etiology and progression of a variety of neurological disorders. Things like infections of the brain and multiple sclerosis may be better understood at their onset.

“It standardizes the approach. It can be applied to a broader portfolio of cells. We can really investigate disease,” says Palecek, noting that an ability to track cells as they progress through various phases of development can help scientists see the cascade of cellular events that occur as neurological conditions manifest themselves.

The new method, he adds, will also allow industry to scale up production of the brain endothelial cells for drug discovery. By exposing cells to various agents, researchers can assess toxicity and effect of promising therapies.