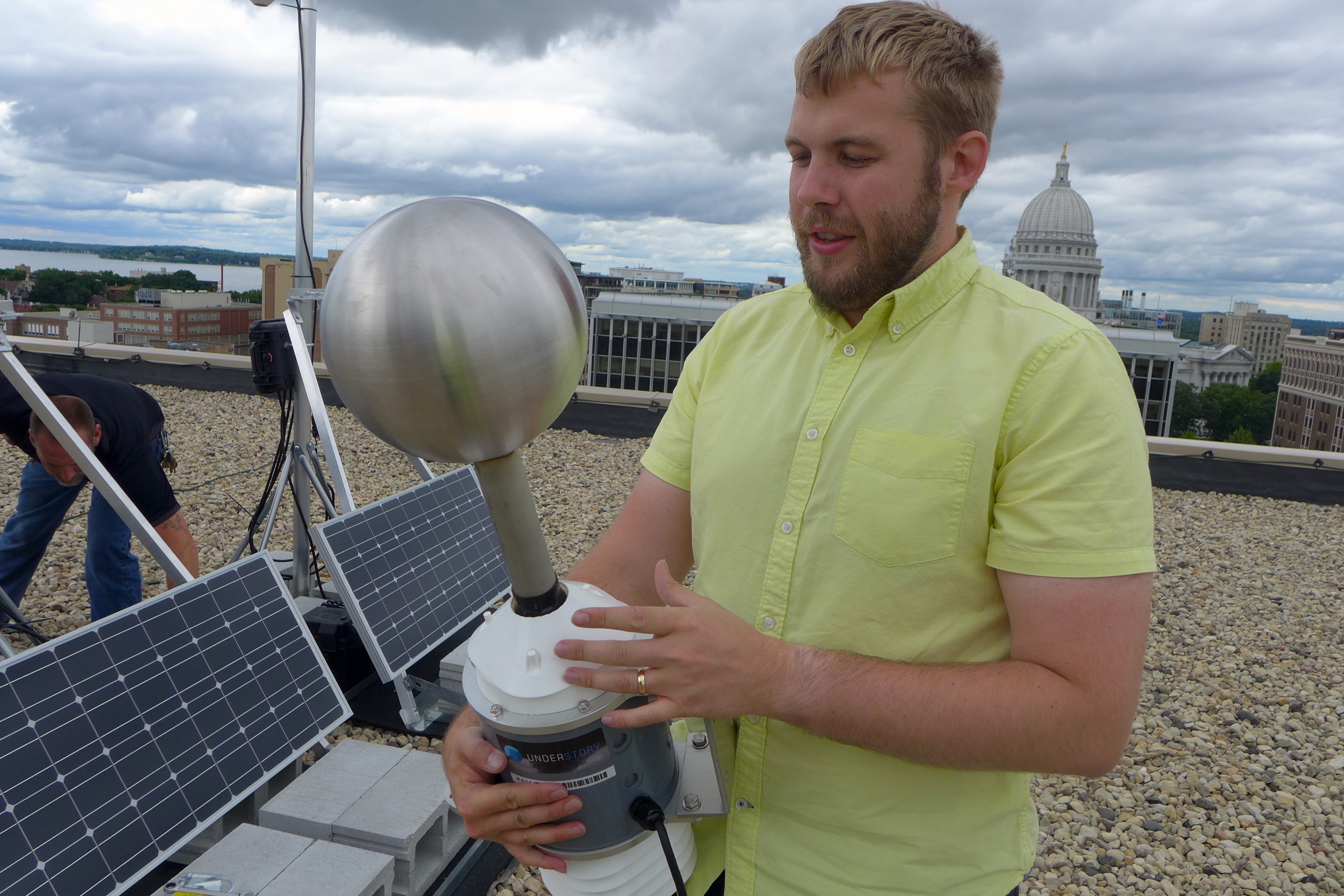 Alex Kubicek, CEO of Understory, holds one of the company’s compact weather stations before it is mounted on the roof of the company’s West Washington Avenue headquarters in Madison. David Tenenbaum

After a three-year sojourn in the Boston area, a maker of weather station networks has moved its headquarters back to Madison.

Understory, spawned by two University of Wisconsin–Madison graduate students in 2012, designs and deploys flocks of miniature weather stations that create an unprecedented level of detail on such weather measures as wind, hail and temperature.

This summer, the company mounted two of its patent-pending stations atop its offices on West Washington Avenue; data gathered there is posted on Understory’s website and updated every minute.

“Any meteorologist can tell you that weather data is way too sparse,” says CEO and co-founder Alex Kubicek, a Mukwonago native. “Radar only looks at the top of the storm, and to know how weather affects people we need to know what is going on at ground level.”

The company uses a “hail gun” that launches simulated hailstones toward a model roof surface to measure the damage they cause.

True to its roots, Understory straddles the divide between academia and commerce. The firm offers data free to academic researchers, and its initial commercial success is intimately related to hail, which was Kubicek’s focus in the Department of Atmospheric and Oceanic Sciences at UW–Madison.

A 2011 study by the National Center for Atmospheric Research found that weather could have a $485 billion impact on the U.S. gross domestic product.

Weather information can be useful to event planners, builders and farmers, but Understory has focused on insurance companies, which pay out billions every year for storm damage. The National Oceanographic and Atmospheric Administration reports that in 2015, 155 people died in 10 weather disasters that each had a price tag of $1 billion or more. 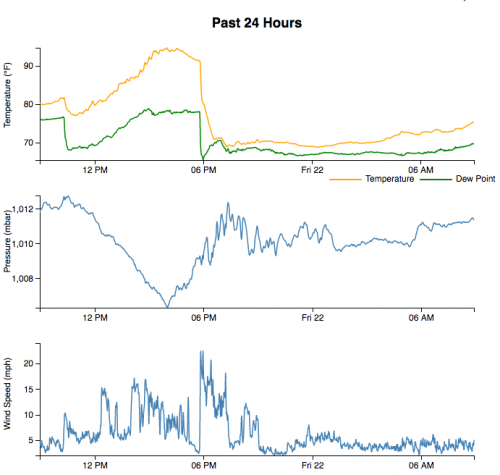 Overall, Kubicek’s UW research on thunderstorms convinced him of the need to create more data. For example, the relationship between storm intensity and hailstone size is uncertain. And the best way to find hail damage is tried, true and laborious: You climb up on the roof and look for it.

As Kubicek and co-founder Bryan Dow, who has a master’s in mechanical engineering from UW–Madison, pondered the problem, they realized that the data gap might be big enough to drive a business through. They began to design a detector built around sensors that register the movement of a metal sphere due to rain, hail and wind, then added devices to measure temperature, pressure and humidity.

Their business was in the first class of the Gener8tor accelerator in Madison, but raising capital was easier on the coasts, so it moved to the Boston area in 2013.

Understory has now completed a $7.5 million round of investment, with the largest shares coming from 4490 Ventures of Madison and Monsanto Growth Ventures, part of the agrichemical giant. The money supported the return to Madison, where Understory has just moved into light, high-ceiling offices downtown.

“Five years ago, there wasn’t much startup buzz in Madison, but now we were able to return home and we are excited to come back,” says Kubicek. “And an awesome reason to move here is to pull talent from the university; that’s a big attractor for us.” 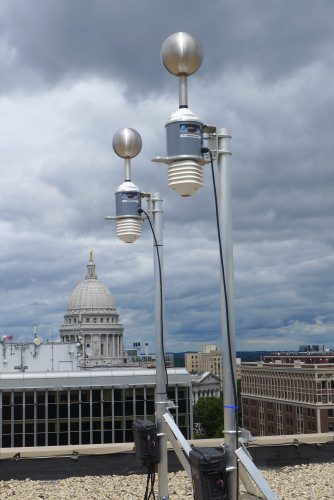 Two weather stations designed by Understory are mounted on the roof of the company’s offices on West Washington Avenue. David Tenenbaum

Understory has installed sensor networks in Kansas City and Dallas that show unprecedented detail about the plunging temperatures and rising winds that mark the arrival of cold fronts, which drive thunderstorms — the birthplace of damaging winds, hail and tornadoes. “This shows data that has never existed before,” says Kubicek. “Meteorologists know what a cold front looks like in theory, but they have never seen it like this.”

Although weather affects myriad businesses, Understory is initially focused on insurance companies, and therefore on wind and especially hail. “What’s important to our insurance partners is the momentum of the hailstones, and we have a direct measure of the impact force and so can determine the damage to roofs of varying ages,” says Kubicek.

The company uses a “hail gun” that launches simulated hailstones toward a model roof surface to measure the damage they cause.

“This way, the insurance company will know you have damage before you do,” he adds, “so the adjustor can call you and get it settled. You may not even have to file a claim.”

The same process could apply to the ice dams that damage roofs, Kubicek says.

Understory’s employees are divided between Massachusetts and Madison. “It’s a diverse group: electrical, mechanical, industrial and software engineers, data scientists, and the product group that handles sales, marketing and administration,” Kubicek says, along with a real estate team that finds sensor locations. “It’s a lot of different roles for a company of 16 people.”

Understory hires a university graduate as a data science fellow. “Most data scientists can’t go directly from academia to a job because they need real world expertise, and we have actual data for them to work on,” Kubicek says.

Beyond insurance, Understory’s data are applicable to weather forecasting, agriculture, outdoor events, utilities and aviation. “The one-time cost of getting a system out there will create new resources that can be used more widely,” Kubicek says.