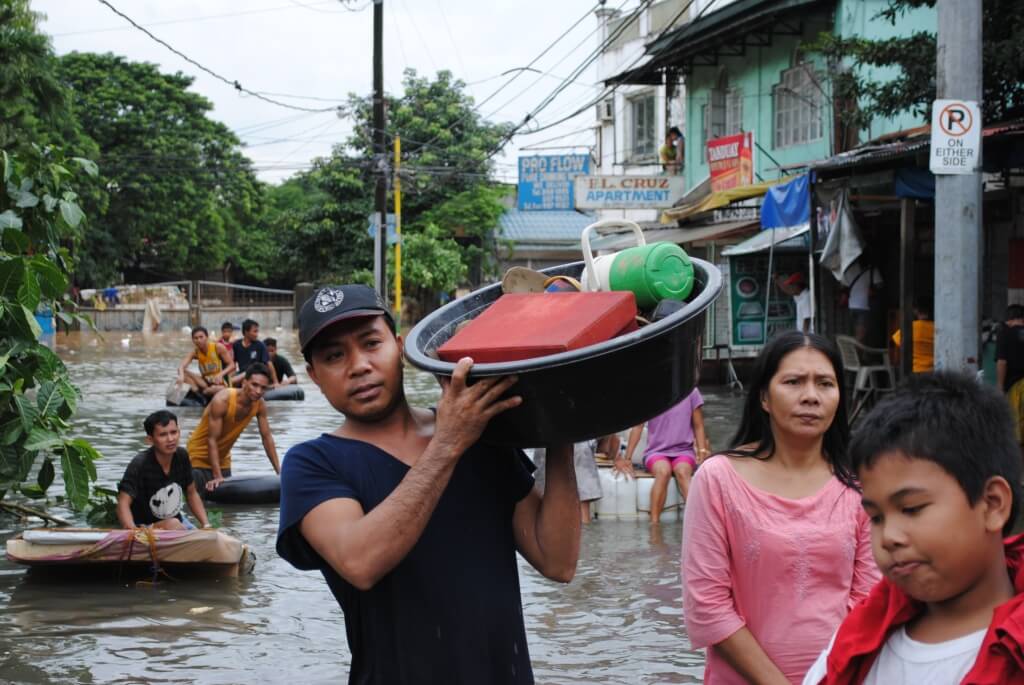 The Philippines is one of many densely-populated nations in and around Southeast Asia that are endangered by rising sea levels caused by global warming. Global average sea level is rising 3.1 centimeters per decade. Photo: Department of Foreign Affairs and Trade

Climate change projections that look ahead one or two centuries show a rapid rise in temperature and sea level, but say little about the longer picture. Today (Feb. 8, 2016), a study published in Nature Climate Change looks at the next 10,000 years, and finds that the catastrophic impact of another three centuries of carbon pollution will persist millennia after the carbon dioxide releases cease.

The picture is disturbing, says co-author Shaun Marcott, an assistant professor of geoscience at the University of Wisconsin–Madison, with a nearly inevitable elevation of sea level for thousands of years into the future.

Most climate projections now end at 2300 at the latest, “because that’s the time period most people are interested in,” says Marcott, a expert in glaciers and ancient climate. “Our idea was that this did not encapsulate the entire effect of adding one to five trillion tons of carbon dioxide to the atmosphere over the next three centuries. Whereas most studies look to the last 150 years of instrumental data and compare it to projections for the next few centuries, we looked back 20,000 years using recently collected carbon dioxide, global temperature and sea level data spanning the last ice age. Then we compared past data to modeling results that extend 10,000 years into the future.” 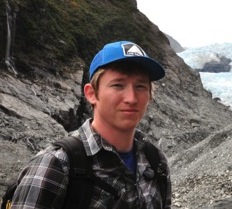 Climate — the interplay among land, ocean and atmosphere — has a long memory, Marcott says. “I think most people would tell you that temperature and sea level will spike as we continue burning fossil fuels, but once we stop burning, they will go back down. In fact, it will take many thousands of years for the excess carbon dioxide to completely leave the atmosphere and be stored in the ocean, and the effect on temperature and sea level will last equally long.”

The study looked at the impact of four possible levels of carbon pollution that would start in 2000 and end in 2300. The complex modeling effort was organized by Michael Eby of the University of Victoria and Simon Fraser University.

“Carbon is going up, and even if we stop what we are doing in the relatively near future, the system will continue to respond because it hasn’t reached an equilibrium,” Marcott explains. “If you boil water and turn off the burner, the water will stay warm because heat remains in it.”

A similar but indescribably more complex and momentous phenomenon happens in the climate system.

“This is a stunning paper … (it) shows just how devastating sea level rise will be, once we look out beyond 2100 A.D.

New data on the relationship among carbon dioxide, sea level and temperature over the last 20,000 years was the basis for looking forward 10,000 years. “Now that we know how these factors changed from the ice age to today,” Marcott says, “we thought, if we really want to put the future in perspective, we can’t look out just 300 years. That does not make sense as a unit of geological time.”

Current releases of the carbon contained in carbon dioxide total about 10 billion tons per year. The number is growing 2.5 percent annually, more than twice as fast as in the 1990s.

People have already put about 580 billion tons of carbon dioxide into the atmosphere. The researchers looked at the effect of releasing another 1,280 to 5,120 billion tons between 2000 and 2300. “In our model, the carbon dioxide input ended in 300 years, but the impact persisted for 10,000 years,” Marcott says. 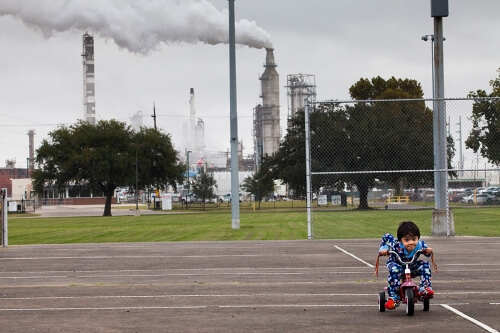 Chrisangel Nieto, age 3, rode his tricycle in front of the Valero refinery in Houston. This refinery processes almost 7 million tons of carbon per year, most of which will end up in the atmosphere as carbon dioxide. Photo by Eric Kayne for Earthjustice

Perhaps the most ominous finding concerns “commitment,” Marcott says. “Most people probably expect that temperature and carbon dioxide will rise together and then temperature will come down when the carbon dioxide input is shut off, but carbon dioxide has such a long life in the atmosphere that the effects really depend on how much you put in. We are already committed to substantial rises in temperature. The only question is how much more is in the pipe.”

The warming ocean and atmosphere that are already melting glaciers and ice sheets produce a catastrophic rise in the ocean. “Sea level will go up due to melting, and because warming expands the ocean. We have to decide in the next 100 years whether we want to commit ourselves and our descendants to these larger and more sustained changes,” Marcott says.

First author Peter Clark and co-authors calculated that ocean encroachment from just the lowest level of total carbon pollution would affect land that in 2010 housed 19 percent of the planet’s population. However, due to climate’s momentum, that effect will be stretched out over thousands of years.

“This is a stunning paper,” says Jack Williams, a professor of geography and expert on past climates at UW–Madison. “At one level, it just reinforces a point that we already knew: that the effects of climate change and sea level rise are irreversible and going to be with us for thousands of years,” says Williams, who did not work on the study. “But this paper shows just how devastating sea level rise will be, once we look out beyond 2100 A.D.”

The melting in Greenland and Antarctica from the highest level of carbon pollution “translates into a sea level rise of 80 to 170 feet,” Williams says. “That’s enough to drown nearly all of Florida and most of the Eastern Seaboard.” 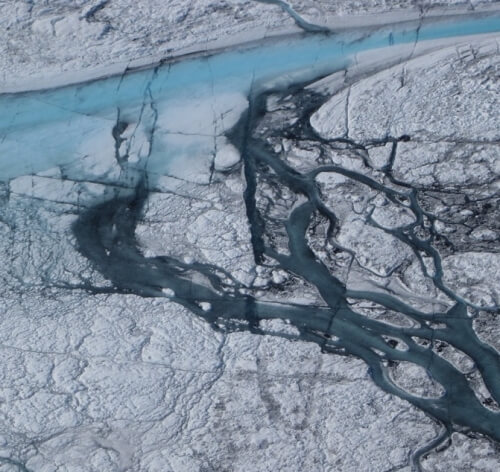 A 5- to 10-meter stream of meltwater flows on the Greenland icecap. PHOTO: M. TEDESCO/CCNY/NASA

For simplicity, the study omitted discussing other major drivers and effects of climate change, including ocean acidification, other greenhouse gases, and mechanisms that cause warming to accelerate further.

“It’s worrisome, for sure,” says Marcott. “I don’t see any good thing in this, but my hope is that you could show these graphs to anyone and they could see exactly what is going on.”

Marcott says a recent slogan of climate campaigners, “Keep it in the ground,” is apt. “In the ideal situation, that is what would happen, but I can’t say if it is economically or politically viable.”

“The paper emphasizes that we need to move to net-zero or net-negative carbon emissions and have only a few more decades to do so,” says Williams. “But the real punch in the gut is the modeled sea level rise and its implications.”