Imbed Biosciences today received clearance from the Food and Drug Administration to market its patented wound dressing for human use. The dressing it calls Microlyte Ag is a sheet as thin as Saran Wrap and can conform to the bumps and crevices of a wound, says company CEO Ankit Agarwal.

The dressing is now cleared by the FDA as a class II medical device, for prescription and over-the-counter use.

Like many dressings now used to treat burns and other persistent wounds, Microlyte Ag contains silver to kill bacteria – but in much smaller quantities.

“Silver is an excellent antimicrobial agent,” says Agarwal, a co-founder of the company in the Madison suburb Fitchburg, “as it is active against a broad range of bacteria and yeast. But the large silver loads found in conventional silver dressings can be toxic to skin cells. Our dressing uses as little as 1 percent as much silver as the competition, and yet the tests we submitted to the FDA showed that Microlyte kills more than 99.99 percent of bacteria that it contacts.” 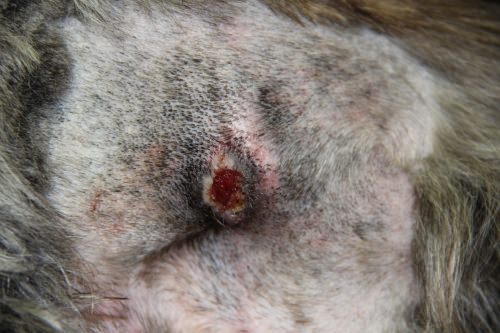 This chronic pressure sore on an Irish wolfhound received conventional treatment for more than three months at the UW–Madison School of Veterinary Medicine. 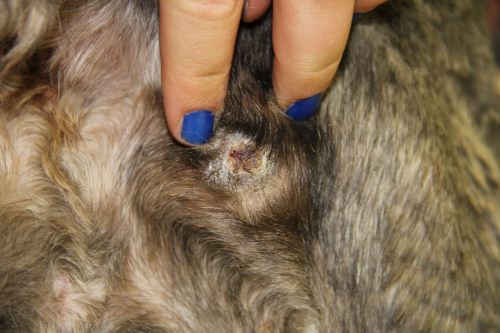 Fourteen days after application of Microlyte, the sore is closed and well on its way to healing. Photos: Imbed Biosciences

That kill ratio even appeared in tests against some of the nastiest hospital-acquired superbugs, including methicillin-resistant Staphylococcus aureus (MRSA) and vancomycin-resistant enterococcus.

Microlyte overcomes a key problem with existing dressings: stiffness. Under a low-power microscope, a wound has bumps and fissures — hiding places for bacteria. The Microlyte dressing inherently adheres to moist surfaces and is so flexible that it drops into the fissures, leading to the sweet combination of greater destruction of bacteria at much lower doses of silver.

Microlyte has several other advantages, Agarwal says. It retains moisture yet is ultrathin and breathable, allowing oxygen to reach the wound and gases to exit, all factors that promote healing. The slow release of the silver means the dressing can remain in place for at least one day. And because the material is a hydrogel (a water-based gel), it can simply be rinsed off as needed before replacement.

Experience with animals shows that the ultra-thin dressing simply sloughs off as the wound heals. All of these advantages should reduce the need to change dressings, which can be so painful that sedation is needed, especially for children.

“Reducing or eliminating dressing changes reduces the pain that the patient experiences,” says co-founder Michael Schurr, chair of general surgery at the Mountain Area Health Education Center in Asheville, North Carolina, and adjunct professor of surgery at the University of North Carolina. “It also reduces costs in supplies and reduces the burden to the health care system that supplies visiting nurses to do the dressing changes.”

“We are seeing in a limited number of cases that it does provide us with a remarkable new tool for dealing with chronic wounds” in dogs and cats treated at the UW–Madison School of Veterinary Medicine, says Jonathan McAnulty, chair of the Department of Surgical Sciences. “We certainly have no reason to think that this will be different with humans,” adds McAnulty, who is also a company co-founder. “The principles are the same, and a lot of the problems are the same.” 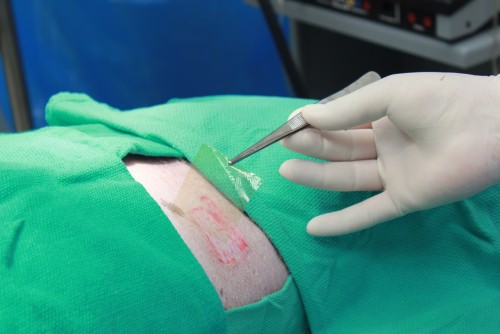 Imbed’s Microlyte dressing is applied to a wound on a pig. The ultra-thin dressing conforms to the wound, bringing the antimicrobial silver into direct contact with bacteria. Photo: Imbed Biosciences

The dramatic closure of wounds that have resisted months of conventional treatment “suggests that chronic bacterial contamination of the wound surface, even when it looks relatively healthy, is a significant factor inhibiting healing in many cases,” McAnulty says. “Once we treat with our dressing, we start to see very dramatic closure of these wounds.”

McAnulty says he’s starting to use Microlyte earlier in treatment. “Certainly it seems appropriate for prevention of infection as well as treatment.”

The ultra-thin dressing material was invented in the lab of Nicholas Abbott, a UW–Madison professor of chemical and biological engineering, when Agarwal was a postdoctoral fellow and where he is now an honorary associate scientist.

The dressing will compete in the $2 billion market sector of “advanced wound dressings,” which are used to treat diabetic ulcers, venous ulcers, burns, bedsores and other difficult wounds.

Imbed has 10 employees. The company is developing other ideas for wound treatment and discussing commercial-scale production of Microlyte. Currently, it plans to reach the market through licensing agreements with hospital suppliers.