A stomachache can put a real damper on your love life — especially if you’re a giant panda.

One minute it’s breeding season and you’re happily dining on fresh bamboo leaves, the next you’re left clutching your stomach while your gastrointestinal lining passes through your system. It exits your body as a thick, gooey, gelatinous mass.

This is exactly what seems to happen to captive giant pandas, and the researchers behind a new study published in Frontiers in Microbiology are beginning to suspect it may play a role in their struggles to reproduce. 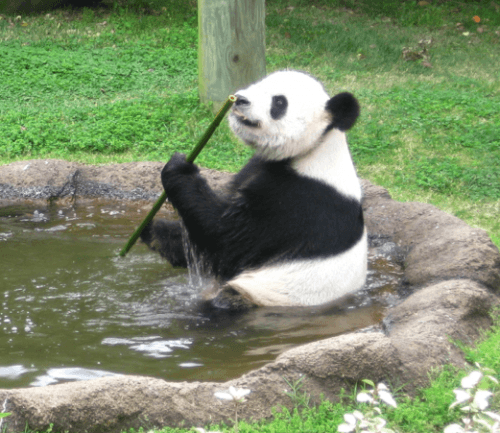 Le Le, a male giant panda at the Memphis Zoo, feeds on a bamboo stalk. Researchers analyzed the percentage of feeding time Le Le and his female zoo mate, Ya Ya, spent feeding on bamboo leaves relative to stalks. Photo: Candace Williams

“We think they are sloughing off the internal mucous membrane of their gastrointestinal tract and because of this, they get really sick, which coincides with gestation,” says Garret Suen, a University of Wisconsin–Madison professor of bacteriology and co-author of the panda poop and feeding behavior study. “The pandas stop eating and they produce these painful, membranous fecal pellets.”

No one quite understands why these gelatinous masses, called mucoids, happen but Suen and his co-authors believe bamboo may be a factor. Evolutionarily speaking, giant pandas are not built to eat a sole diet of bamboo. As bears, their digestive systems are designed to break down meat and small amounts of plant material, yet in the wild and in captivity these bears are exclusively herbivorous. The study suggests this may lead to digestive troubles that could negatively affect panda pregnancy. It motivated the researchers to take a closer look at the gut bacteria involved.

“By studying the microbial community in the panda’s gastrointestinal tract, we gain a better understanding of panda nutrition, which could help improve the health and reproduction of the endangered species.”

“Gastrointestinal diseases are a major cause of mortality in wild and captive pandas but scientists understand very little about their digestive process,” says co-author Ashli Brown Johnson, state chemist and Mississippi State University associate professor of biochemistry, molecular biology, entomology and plant pathology. “By studying the microbial community in the panda’s gastrointestinal tract, we gain a better understanding of panda nutrition, which could help improve the health and reproduction of the endangered species.”

Suen, an Alfred Toepfer Faculty Fellow, also has other motivations. A renaissance man of the microbiome, his lab studies the gut bacteria of everything from cows to sloths to pandas. His interests are both fundamental and applied. For example, understanding how animals and their microbes break down fibrous plant materials could aid in more efficient production of biofuels. It could also lend insights into human digestive diseases. 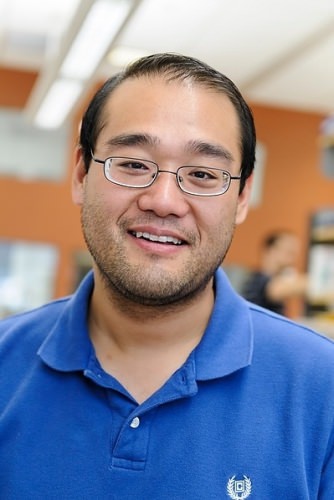 For the study, Suen, Brown Johnson and co-first authors Candace Williams and Kim Dill-McFarland enlisted help from the Memphis Zoo, which has collected feeding behavior on its two giant pandas — Le Le (male) and Ya Ya (female) — since 2003. Williams, who conducted the work as a Ph.D. student in Brown Johnson’s lab, had also performed her master’s degree work at the zoo, watching the pandas feed for 12 hours a day.

Using data recorded by trained zoo docents, the research team analyzed how much time Ya Ya and Le Le spent feeding on both bamboo stalks and leaves. They saw dramatic shifts in eating behavior: The pandas ate leaves less than one percent of the time in winter and spring, but by August — when mucoids became more prevalent — nearly 60 percent of their feeding time was spent eating leaves.

Every summer, in captivity and in the wild, pandas switch from eating primarily the woody stalks of bamboo to the leaves. It is at this transition — which also coincides with when most female pandas become pregnant — that their digestion appears to go awry. In July and August, pandas pass more mucoids, cease eating, become lethargic, and express their discomfort and pain.

“If it’s happening every three to four days, and the pandas stop eating for half to a whole day — when they normally spend their whole day eating — that’s a lot,” says Dill-McFarland, a Ph.D. student in Suen’s lab. 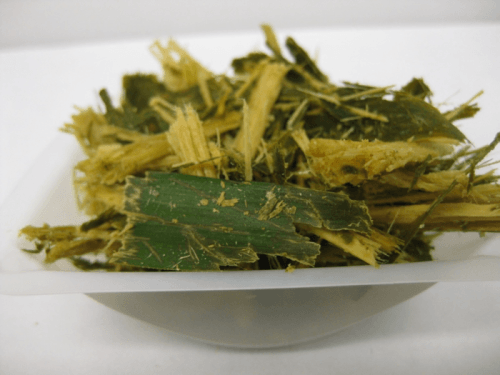 A fecal sample from a giant panda, showing a mix of bamboo stalk and leaves. Pandas eat up to a third of their body weight in bamboo every day. Photo: Candace Williams

The researchers studied bowel movements the pandas made in February 2013, during the season when pandas don’t normally have mucosal poop, and between June 29 and Aug. 22, 2014, when they more frequently pass mucoids. During this time, zookeepers collected the mucoids as well as the regular feces the bears produced immediately prior to and immediately after these events.

The team studied five normal fecal samples from Ya Ya and one mucoid, and 13 regular bowel movements from Le Le and five mucoids. The samples arrived from the zoo like “chicken breasts wrapped in foil,” says Dill-McFarland.

Williams traveled to Madison to learn from Suen and Dill-McFarland how to analyze the microbial composition of panda poop. Regular panda poop resembles shredded bamboo stalks and was a challenge for the researchers to process. The mucoids were gooey, smelled “ghastly” (says Williams) and presented their own challenges.

The team found the panda poop had unusually low bacterial diversity relative to other herbivores, though the mix of bacteria changed day to day. The diversity dropped even lower right before mucoids, but then spiked in the mucoids themselves, which contained a different population of microbes than regular poop. In particular, they were made up of bacteria typically found in the gut lining. 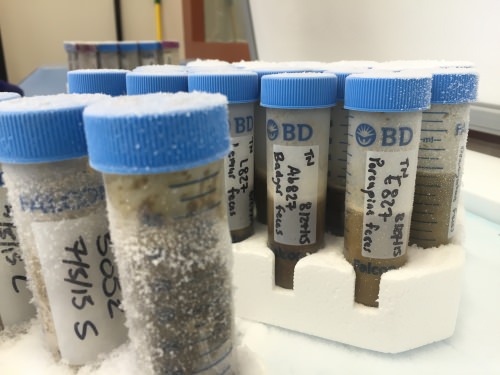 Tubes of feces from badgers, porcupines, lemurs and more sit on top of a lab freezer. Photo: Kelly Tyrrell

They also found bacteria in the mucoids associated with dysfunctional digestion in humans, called Actinobacteria.

“What we think might be happening is that their diet is causing a strong internal reaction, leading to an inflammatory response,” says Suen. “Pandas are basically shedding their gastrointestinal lining to allow for the replacement of those microbes. It’s kind of like resetting the microbiome.”

While researchers can’t be certain why pandas experience this resetting, it is clear their diet is rough on the animals. At 220 to 275 pounds, pandas eat up to a third of their body weight in bamboo every day. It passes quickly through their digestive systems, which does not give the microbes in their guts much time to break things down. This is entirely different from other animals adapted to consuming plant matter, like cows, whose rumen microbes take up to 24 hours digesting the complex carbohydrates found in plants. 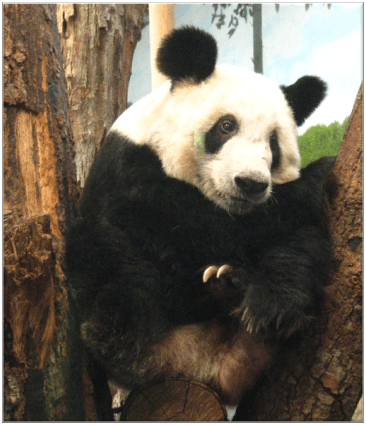 Ya Ya, a female giant panda, sits in a tree at the Memphis Zoo. Photo: Candace Williams

The study does not provide solutions to prevent the gastrointestinal distress pandas experience, which Williams says is very hard to watch. Whether pandas feed on stalks or leaves appears related to chemical changes in the bamboo leaves themselves, a strategy some plants use to prevent herbivores from munching on them. And meat is out of the question.

“It’s gotten to the point where if you try to feed them meat, they get violently ill,” says Suen.

But the study does give scientists a place to start.

“Until recently, the gut microbiome hasn’t really played a role in the management of animals,” says Williams. “Having a balanced gut is important, and it’s also important that we know these things, especially about such unique animals. I strive to let people know how important the gut microbiome really is and the impact it has on reproduction, health and even immune function.”

That Ya Ya produced just a single mucoid is one limitation of the analysis, as is her unusual breeding cycle. However, pandas are incredibly difficult to study, the researchers say, and data of this kind are rare.

Additional researchers from Mississippi State University and the Memphis Zoological Society contributed to the study, which was funded by the United States Forest Service’s International Programs, the Memphis Zoological Society, the United States Department of Agriculture’s National Institute of Food and Agriculture, the Mississippi Agricultural and Forestry Experiment Station, and the Leo Seal Family Foundation.