A new mouse model, developed by researchers at the University of Wisconsin–Madison, is the first to show that when more of a specific biological molecule moves between different parts of nerve cells in the mouse brain, it can lead to behaviors that resembles some aspects of autism spectrum disorder (ASD) in humans.

This biological molecule, called acetyl-CoA, is a major part of the process cells use to make energy from food. It’s also used within cells to tag different proteins, which influences where and how they function. Local concentrations of acetyl-CoA and its movement, or flux, between different areas within cells is tightly regulated. 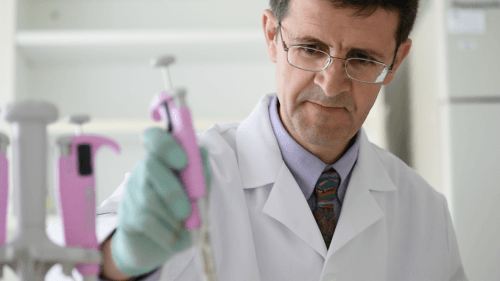 “We show, for the very first time, that changes in acetyl-CoA flux, and not just changes in its levels, in individual neurons can affect neuronal activity,” says Luigi Puglielli, a professor in the Department of Medicine of the UW–Madison School of Medicine and Public Health and the UW’s Waisman Center.

In the study, published this week in The Journal of Experimental Medicine, the researchers engineered mice to make the human version of a protein that ferries acetyl-CoA into a specific compartment within cells. Mouse models of ASD can help scientists understand the molecular basis of the disorder.

Previous studies revealed that mutations in this ferrying protein, which is called AT-1, are associated with spastic paraplegia, severe developmental delays and autism spectrum disorder in humans. But how mutations in AT-1 are linked to these developmental disorders was unknown.

The current study showed that changes in the amount of AT-1 in nerve cells can profoundly influence how much acetyl-CoA is found in different areas within those cells. When AT-1 levels are high, as is the case in the brains of the mice with the human AT-1 protein, increased movement of acetyl-CoA into specific areas within cells sets off a chain reaction of consequences that the researchers think ultimately leads to the mice showing autism-like behaviors.

Neurons in the brains of mice without (left) and with (right) human AT-1. In the mice with human AT-1 the neurons become more branched and spiny. Courtesy of the Puglieli Lab, UW–Madison Waisman Center

“We could call AT-1 a ‘master regulator’ of intracellular acetyl-CoA flux, which, in turn, can be said to be a master regulator of essential neuronal functions,” says Puglielli.

In the brains of mice with human AT-1, atypical localization of acetyl-CoA in the nerve cells causes a slew of more than 400 genes to become dysregulated and pump out higher levels of proteins. Several of these proteins play important roles in regulating both the growth of neurons and how nerve impulses travel through them.

The global changes in protein levels caused by manipulating these master regulators leads to significant changes in what nerve cells look like and how they function in these mice. For instance, the ends of the nerve cells become more branched and spiny and their ability to mediate typical learning and memory formation is compromised.

Puglielli and his colleagues think these changes in how the nerve cells look and function ultimately caused the AT-1 mice to behave atypically, in ways that resemble aspects of ASD in humans.

“These sort of manipulations and studies cannot be performed in humans, hence the need to develop and study mouse models.”

“We need to be able to modify genetic, molecular and biochemical aspects of the disorder,” says Puglielli. “These sort of manipulations and studies cannot be performed in humans, hence the need to develop and study mouse models.”

While mouse models can provide vital information about human disorders, such as ASD, the researchers urge caution while interpreting findings.

Puglielli and his colleagues are now looking at other proteins that regulate acetyl-CoA movement within cells. “Mutations in these proteins are also associated with different disorders, including ASD and intellectual disability,” he says. “A comprehensive analysis of the functions of these proteins will help us dissect more aspects of how acetyl-CoA flux is relevant to ASD.”