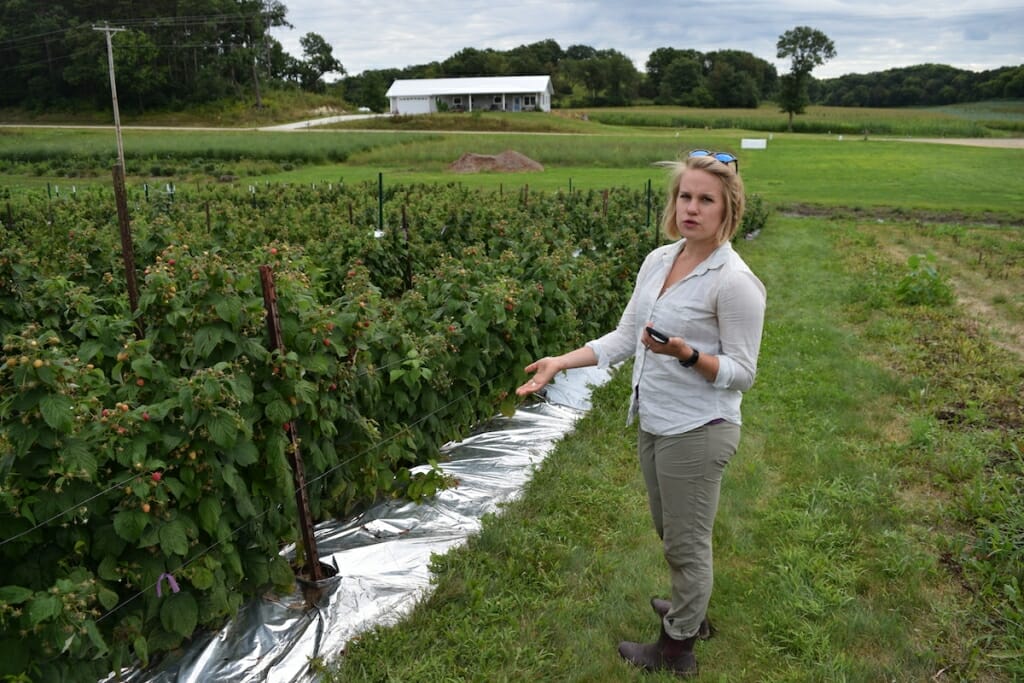 It’s a beautiful summer day with a hint of fall in the air at Bures Berry Patch, southwest of Barneveld, Wisconsin. On the edge of a quarter acre of raspberry canes, research assistant Andi Nelson is counting fruit fly pupae into small plastic tubs.

Nearby, rows of raspberry plants emerge from ribbons of white, black or silvery films that work as mulch. The mulches are being tested, with guidance from Christelle Guédot, associate professor of entomology at the University of Wisconsin–Madison, as a way to manage an insect that’s earned a reputation as unmanageable. 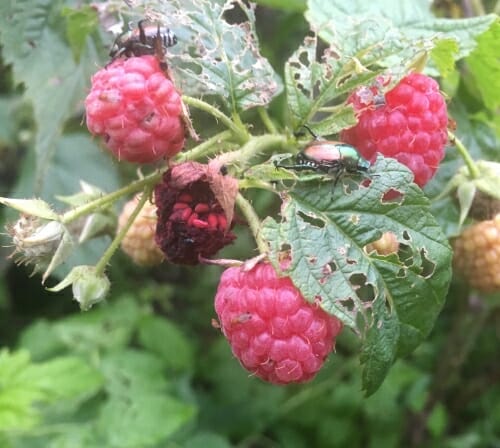 A double whammy on raspberries — spotted wing Drosophila attacking the fruit and much larger Japanese beetle adults feeding on the foliage. Both insects are invasive. Photo: P.J. Liesch

The brown marmorated stink bug made quite a stink a few years ago when it invaded Wisconsin houses and crops. But the spotted wing Drosophila may be the worst insect pest you’ve never heard of. But if you grow fruit in Wisconsin, you definitely know it. As one in a ceaseless series of insect invasions, spotted wing Drosophila infests berries, cherries and other soft fruits. When the fly is really active, says owner Ed Bures, he has to throw away half of his raspberry harvest.

Insects are constantly seeking new territory, but if you grow something that interests them, how do you protect your crop against a new menace?

Spotted wing Drosophila became the topic on a visit to the UW–Madison Department of Entomology. The fly has been a pest in the continental United States since 2008, and was first seen in Wisconsin in 2010, say Patrick Liesch, Extension entomologist. 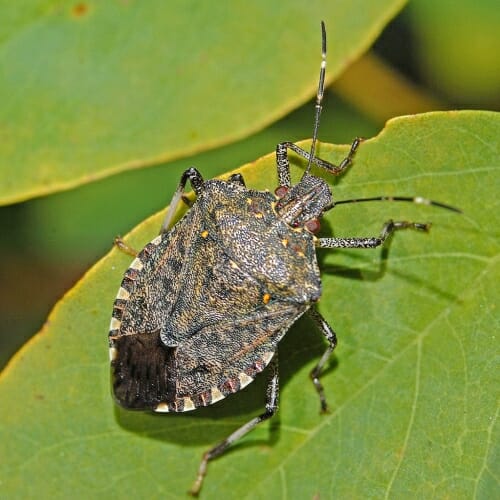 “It affects all growers of small fruit, from big commercial farms to someone with a few plants in the backyard,” Liesch says. “It’s surprising how quickly it took off in the state, and how dramatic the damage can be. Growers have to spray regularly who did not have to do nearly as much, or did not even spray at all.”

Insecticide control is uncertain and expensive, says Bures. “We’ve been working with Christelle’s group, through the Wisconsin Berry Growers Association, trying to figure what to do besides spraying all the time. Insecticides are limited, and consumers have a right to be concerned about what is on their food. So we’re trying to minimize stuff, but at same time, manage a crop that is profitable.” 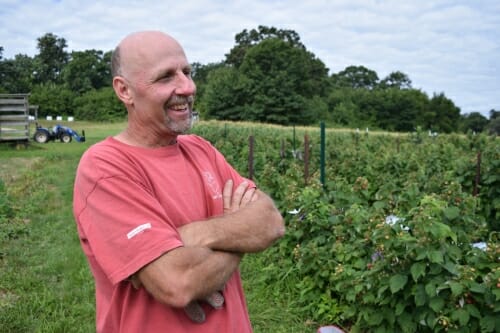 Ed Bures, who owns a 14-acre vegetable and fruit farm near Barneveld, is struggling to grow raspberries in the face of a voracious fruit fly. Photo: David Tenenbaum

Guédot, who is leading the research, says the goal is to use mulches to change the microenvironment by raising the temperature and reducing the humidity on the ground and in the plant canopy, and thus decrease the adult population and fruit infestation.

Guédot’s PhD student, Hanna McIntosh, says when the eggs mature into larvae, most drop to the ground to mature further into pupae, the stage that later develops into adult flies that will lay eggs in fruit and start the entire process again.

All McIntosh needs to do over the next four growing seasons is show that any or all of these effects work well enough to put more healthy fruit in the basket. To do that, she’s recording temperature and humidity, trapping adult flies in the plant canopy, counting larvae in the fruit, and placing lab-reared larvae and pupae in plastic “corrals” that sit atop the mulch. 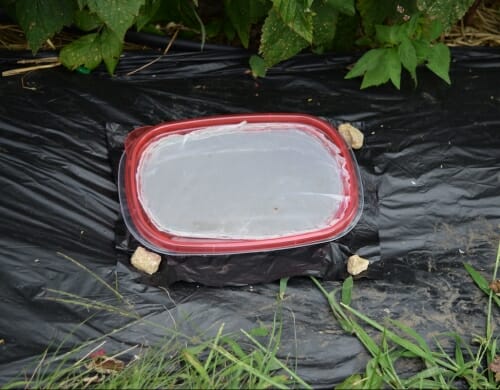 These containers, placed on the mulch, are used to test survival of fruit fly larvae and pupae. Photo: David Tenenbaum

Each corral gets 20 larvae, so the kill ratio comes from counting flies that emerge from each corral. “With this insect, we’ll never reduce the population by 50%,” says McIntosh, “but if we can get a 10% decrease, that could make a difference, especially if it’s coupled with the things that Ed is doing,” like thinning the plants to eliminate hiding places.

Finding new weapons, including biocontrols, against new invaders is stock-in-trade at the UW–Madison College of Agricultural and Life Sciences and Division of Extension, Guédot says. “Sometimes, growers who confront a new insect or parasite might feel like they’re flying in the dark, but there are usually smart, effective ways to cope — but it might take some time to find them.”

There are many candidates for coping with an invasive insect in an agricultural state, says Liesch. “We often start by going to the insect’s native range to look for natural predators and parasites, see if those might be feasible and won’t have unintended consequences.” So far, natural enemies of the spotted wing have not been identified. 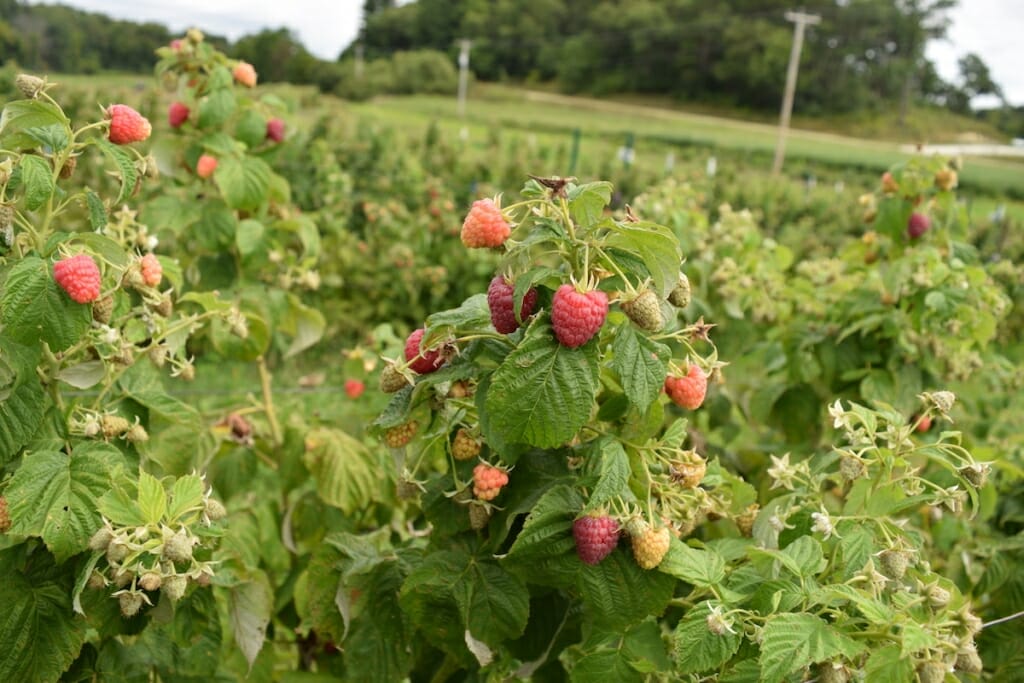 Raspberries high on the plant tend to have less of a problem with spotted wing Drosophila than those in the darker condition below, says Ed Bures. He thins the plants to make the habitat more hostile to the fruit fly. Photo: David Tenenbaum

Some insecticides are partly effective against spotted wing Drosophila, says Liesch, though they may also suppress natural predators. Tests at Peninsular Agricultural Station in Door County are showing some promise for certain organic pesticides derived from bacteria.

Another aspect of responding to a new insect is to assess which crops and varieties are susceptible and which are not. Certain cultivars of wine grapes, for example, seem unaffected by spotted wing Drosophila. “We had been recommending that grape growers spray against spotted wing Drosophila,” says Guédot, “but then we observed that cold-climate wine grapes are not susceptible unless the fruit is damaged. So we altered that advice, and growers can avoid spraying. That is good news.”

“I do research on forage crops, but I have a farm, have a job, and I absolutely could not do it without (UW–Madison and Extension).”

Although it’s way too soon to know if any of these mulches will pan out, “we are hopeful,” says Gúedot. “As one of our survey respondents said, ‘We need more research!’”

Farmers can support research, but can seldom take it on themselves, says berryman Bures, who also grows about four acres of strawberries. “We could not grow fruit without UW–Madison and Extension. I do research on forage crops, but I have a farm, have a job, and I absolutely could not do it without them.”

The benefits from a better coping mechanism against spotted wing Drosophila extend beyond Wisconsin, McIntosh points out. “These insects have invaded everywhere in the world that grows fruit. If the mulch works here, it’s probably applicable to people who grow fruit in other places.”