Corn that acquires its own nitrogen identified, reducing need for fertilizer 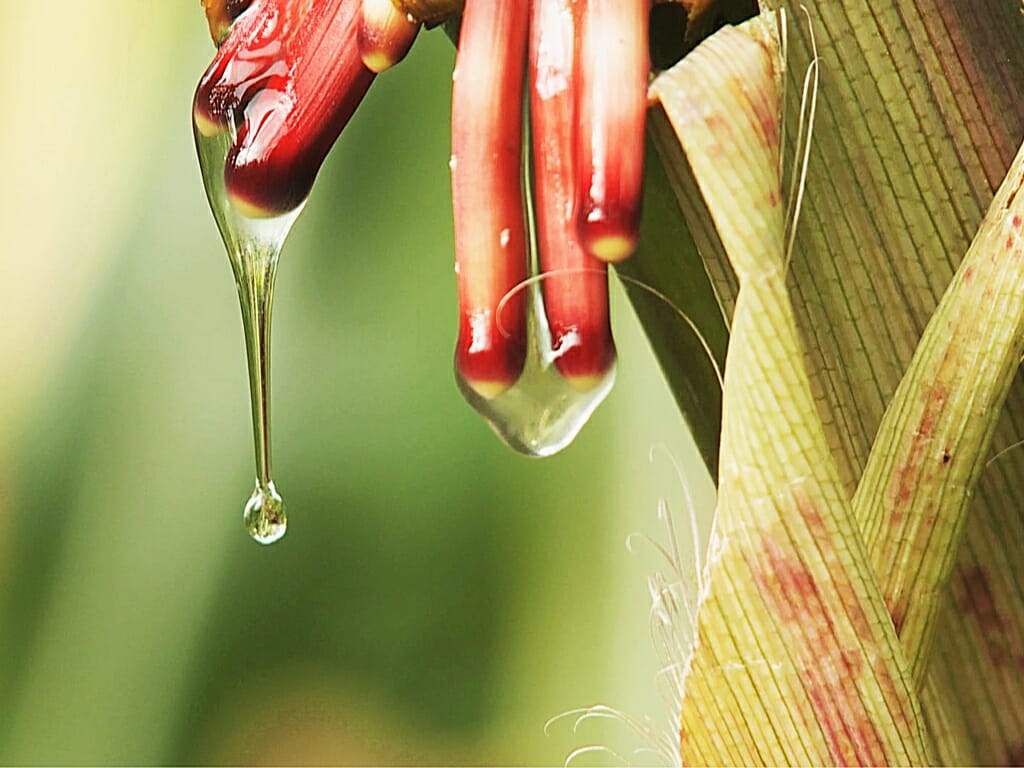 The dripping gel from this corn plant harbors bacteria that convert atmospheric nitrogen into a form usable by the plant. Photo: Howard-Yana Shapiro

A public-private collaboration of researchers at the University of Wisconsin–Madison, the University of California, Davis, and Mars Inc., have identified varieties of tropical corn from Oaxaca, Mexico, that can acquire a significant amount of the nitrogen they need from the air by cooperating with bacteria.

To do so, the corn secretes copious globs of mucus-like gel out of arrays of aerial roots along its stalk. This gel harbors bacteria that convert atmospheric nitrogen into a form usable by the plant, a process called nitrogen fixation. The corn can acquire 30 to 80 percent of its nitrogen in this way, but the effectiveness depends on environmental factors like humidity and rain.

Scientists have long sought corn that could fix nitrogen, with the goal of reducing the crop’s high demand for artificial fertilizers, which are energy intensive, expensive and polluting. Further research is required to determine if the trait can be bred into commercial cultivars of corn, the world’s most productive cereal crop.

The findings are reported Aug. 7 in the journal PLOS Biology.

“It has been a long-term dream to transfer the ability to associate with nitrogen-fixing bacteria from legumes to cereals,” says Jean-Michel Ané, a professor of bacteriology and agronomy at UW–Madison and a co-author of the new study.

Legumes, such as beans, are the only group of crop plants previously known to acquire a significant amount of nitrogen through fixation, which they perform in specialized tissues called root nodules.

Howard-Yana Shapiro, the chief agricultural officer at Mars, a senior fellow in the Department of Plant Sciences at UC Davis and a co-author of the report, identified the indigenous varieties of corn in a search for cultivars that might be able to host nitrogen-fixing bacteria.

The corn is grown in the Sierra Mixe region of Oaxaca in southern Mexico, part of the region where corn was first domesticated by Native Americans thousands of years ago. Farmers in the area grow the corn in nitrogen-depleted soils using traditional practices with little or no fertilizer, conditions that have selected for a novel ability to acquire nitrogen. The biological materials for this investigation were accessed and utilized under an Access and Benefit Sharing Agreement with the Sierra Mixe community and with the permission of the Mexican government. 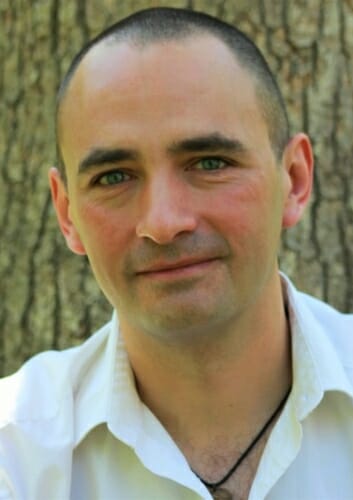 The corn is striking. Most corn varieties grow to about 12 feet and have just one or two groups of aerial roots that support the plant near its base. But the nitrogen-fixing varieties stand over 16 feet tall and develop up to eight or 10 sets of thick aerial roots that never reach the ground. Under the right conditions, these roots secrete large amounts of sugar-rich gel, providing the energy and oxygen-free conditions needed for nitrogen-fixing bacteria to thrive.

Establishing that plants are incorporating nitrogen from the air is technically challenging.

“It took us eight years of work to convince ourselves that this was not an artifact,” says Ané, whose lab specializes in studying and quantifying nitrogen fixation. “Technique after technique, they’re all giving the same result showing high levels of nitrogen fixation in this corn.”

The group used five different techniques across experiments in Mexico and Madison to confirm that the Sierra Mixe corn’s gel was indeed fixing nitrogen from the air and that the plant could incorporate this nitrogen into its tissues.

“What I think is cool about this project is it completely turns upside down the way we think about engineering nitrogen fixation,” says Ané.

The gel secreted by the corn’s aerial roots appears to work primarily by excluding oxygen and providing sugars to the right bacteria, sidestepping complex biological interactions. The research team was even able to simulate the natural gel’s effects with a similar gel created in the lab and seeded with bacteria. The simplicity of the system provides inspiration to researchers looking to identify or create more crop plants with this trait.

“This corn showed us that nature can find solutions to some problems far beyond what scientists could ever imagine.”

Breeding the trait into commercial cultivars of corn could reduce the need for artificial nitrogen fertilizers, which have a host of disadvantages. More than 1 percent of the world’s total energy production goes toward producing nitrogen fertilizer. Developed countries contend with waterways polluted by leaching nitrogen, while adequate fertilizer is often inaccessible or too expensive for farmers in developing countries. Corn that fixes some of its own nitrogen could mitigate these issues, but more research will be required.

“Engineering corn to fix nitrogen and form root nodules like legumes has been a dream and struggle of scientists for decades,” says Ané. “It turns out that this corn developed a totally different way to solve this nitrogen fixation problem. The scientific community probably underestimated nitrogen fixation in other crops because of its obsession with root nodules.”

“This corn showed us that nature can find solutions to some problems far beyond what scientists could ever imagine,” Ané says.

Researchers from UW–Madison, UC Davis and Mars Inc. have made a remarkable discovery: an indigenous variety of Mexican corn that can also fix nitrogen from the atmosphere, instead of requiring synthetic fertilizers.