Co-D Therapeutics, a University of Wisconsin–Madison spinoff, is developing a three-drug cocktail to battle a wide range of cancers. The first target for Co-D is angiosarcoma, a rare and lethal cancer that arises from blood vessels.

The company’s submicroscopic package contains paclitaxel, a standard cancer drug, combined with two other drugs designed to reduce the resistance that often develops against chemotherapy drugs.

Kwon has been working on new drug carriers and combination cancer treatments for more than 20 years; Kozak is an expert on angioscarcoma.

Four patents on the candidate drug, called Triolimus, have been issued to the Wisconsin Alumni Research Foundation (WARF).

The Triolimus package is a double-layer structure called a micelle that is only 40 nanometers in diameter — about 1/200 the diameter of a human hair. Each individual component of Triolimus has been tested in humans and several have Food and Drug Administration approval.

Although paclitaxel and related cancer drugs derived from the Pacific yew tree are in widespread use, they usually require a toxic solvent that can cause dangerous anaphylactic shock in patients. The micelle technology eliminates the solvent and allows the simultaneous administration of other insoluble drugs.

In 2015, Co-D received FDA orphan drug designation for Triolimus, which will entitle the company to seven years of market exclusivity for treating angiosarcoma with it.

If the product works against angiosarcoma, it could be used against breast, lung and other common cancers that are now treated with paclitaxel.

The selection of agents in Triolimus followed this newer approach:

The result is a single, apparently safe package that can carry multiple drugs and, by eliminating the toxic solvents, allows for increased dosages.

The carrier technology is key to these benefits, Kwon says. “The micelle can safely deliver a really potent three-drug combination, even though all of them are insoluble in water.”

To make the package containing its three-drug payload, “you simply mix the drugs with a solvent and water, remove the solvent under reduced pressure, and the micelles self-assemble,” says Kwon. “You freeze-dry the product and when it’s time to use it, you reconstitute it with water.” 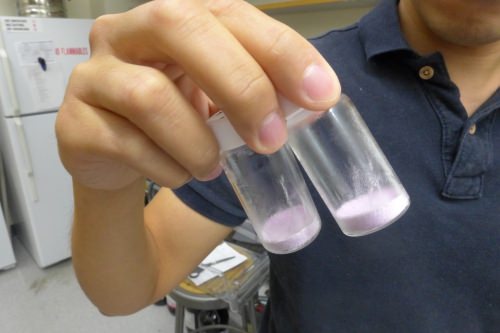 Vials containing freeze-dried samples of Triolimus, a drug being developed by Co-D Therapeutics.

In 2015, Co-D received FDA orphan drug designation for Triolimus, which will entitle the company to seven years of market exclusivity for treating angiosarcoma with it. Additional benefits include tax credits related to clinical trial expenses, potential exemption from the FDA user fee, and smaller trials than those required for standard new drug applications.

Research in an animal model of angioscarcoma showed a better outcome from the triple-drug Triolimus than for a micelle carrying paclitaxel alone. In both cases, the micelle permitted a paclitaxel dose three times above the standard dose.

“… the formulation reduces the need to give patients a toxic solvent, and that alone is a potential benefit.”

Co-D is raising funds to complete preclinical studies and a phase I clinical trial with angiosarcoma patients. “We have a clear path to approval,” says Abdalla Saad, company president and CEO. “Because of the rarity of angiosarcoma and the need of a more effective and safer treatment, we anticipate approval after phase II clinical trials.”

Saad, who has a master’s in biotechnology from UW–Madison, says, “Our research and development costs are low compared to costs for new chemical entities. The manufacturing method developed on campus will be transferred to a contract manufacturer for scale-up.”

“There is no question that Triolimus will be effective, as it contains the most widely used anti-cancer agent in the history of man,” says Kozak. “My expectation, based on the biochemistry and our preliminary data, is that it will significantly exceed the activity of paclitaxel. But even if it does not, the formulation reduces the need to give patients a toxic solvent, and that alone is a potential benefit.”