A single defect in a gene that codes for a histone — a “spool” that wraps idle DNA — is linked to pediatric cancers in a study published today in the journal Science.

“Unlike most cancers that require multiple hits, we found that this particular mutation can form a tumor all by itself,” says Peter W. Lewis, an assistant professor of biomolecular chemistry in the School of Medicine and Public Health at the University of Wisconsin–Madison.

Histones derive their pattern from the same genome that they help to pack up and organize. “A histone’s day job is compacting the genome,” says Lewis. “The histone takes six feet of DNA and packs it in something that is a few microns in diameter.” 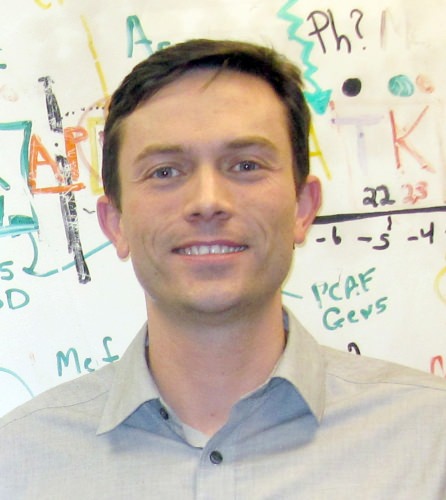 Lewis started exploring histone mutations long before arriving at UW–Madison’s Wisconsin Institute for Discovery in 2013. In a publication that year, he and colleagues discovered the mechanism for a histone mutation linked to a fatal brain tumor called DIPG.

Because the DIPG mutation always changed the same amino acid in the same location in the histone gene, Lewis knew something was special about it.

Histones play a role in the “Rube Goldberg” cascade that activates or silences genes. During these processes, a histone is studded with certain chemical groups that attract proteins that, in turn, initiate further events.

The eventual result may be protein formation, another process that uses DNA, or a mechanism that does the reverse and silences the DNA.

In previous work on DIPG, Lewis found that mutations can cause a histone to inhibit the enzyme PRC2, which inactivates genes by compacting them. However, this silencing action is lost if PRC2 itself is inhibited by a histone mutation, Lewis says, “and this leads to aberrant gene expression.”

Gene silencing is indispensable. Although nearly all human cell types contain every one of our 20,000-odd genes, “most are shut off in any given cell type because they are packed up and unable to serve as a template for proteins,” Lewis says.

In 2014, Lewis and colleagues showed that a histone mutation at a position called K27 could block differentiation of a neural stem cell, causing it to remain in a primitive state prone to uncontrolled growth.

Cells from a bone cancer caused by a histone mutation are brown if they contain the mutation (left). Purple cells are intact, without the mutation (right). Courtesy of Peter W. Lewis

Shortly afterward, a group in the United Kingdom found that 95 percent of chondroblastomas, a rare bone cancer in adolescents, contained a similar mutation at position K36 on the histone gene.

The new Science study focused on the K36 mutation, which blocks the specialization in the type of stem cell that can form cartilage, bone and fat.  When the researchers inserted that mutation into mice, the result was an undifferentiated pediatric sarcoma (cancer of connective tissue), as might be expected due to the arrest of the stem cell’s development caused by the K36 mutation.

Lewis and colleagues from Rockefeller and McGill Universities also screened human tissues from undifferentiated sarcomas and saw the same K36 mutation in 20 percent of the samples. “What we were learning in mice was reflected in human disease, it was not just some weird mouse artifact,” says Lewis.

Although a few mutations of genes are strong enough to cause cancer by themselves, “this was the first time a histone gene mutation was demonstrated to cause cancer by itself,” Lewis says. The result was all the more striking, he says, “because there are 29 intact histone genes, and other mutations that are normally present in adult tumors were absent. This is what we call a dominant negative; it’s the rotten apple that spoils the barrel. These are very potent mutations.”

This basic knowledge of a specific cancer is essential to start drug testing, Lewis says. “Unless you have this model, where are you going to start?”

This basic knowledge of a specific cancer is essential to start drug testing, Lewis says. “Unless you have this model, where are you going to start?”

The enzymes affected by histone mutations “have been implicated in many common cancers,” says Lewis, who is collaborating with a pharmaceutical company to find out “how mutant histone has figured out to inhibit this enzyme.”

A drug that inhibits PRC2 might be able to treat metastatic breast cancer, where the enzyme may be overactive.

Beyond cancer, Lewis notes that histone modification “works in conjunction with other mechanisms, so it’s important for understanding human development more generally.”

This research was supported by the National Institutes of Health (grant #P01CA196539) and other sources.