Listeria may be serious miscarriage threat early in pregnancy

Listeria monocytogenes, the common food-borne bacteria depicted in this illustration based on electron microscope imagery, can cause miscarriage, stillbirth and premature labor in pregnant women. Image: James Archer/Centers for Disease Control

Listeria, a common food-borne bacterium, may pose a greater risk of miscarriage in the early stages of pregnancy than appreciated, according to researchers at the University of Wisconsin–Madison School of Veterinary Medicine studying how pathogens affect fetal development and change the outcome of pregnancy.

“For many years, listeria has been associated with adverse outcomes in pregnancy, but particularly at the end of pregnancy,” says Ted Golos, a UW–Madison reproductive physiologist and professor of comparative biosciences and obstetrics and gynecology. “What wasn’t known with much clarity before this study is that it appears it’s a severe risk factor in early pregnancy.”

Golos and his collaborators published their results Feb. 21, 2017 in the journal mBio. 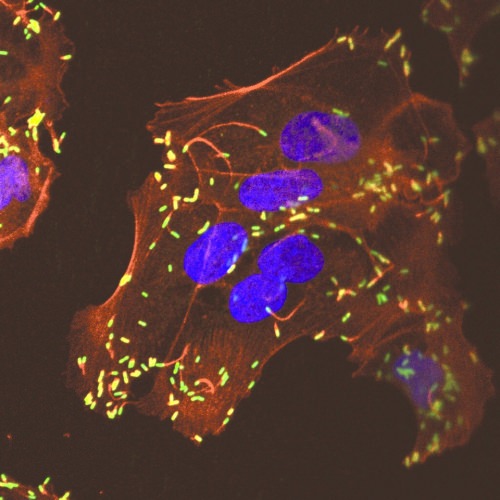 Listeria — stained green in this image — invades cells in the uterine lining of monkeys in their first trimester of pregnancy. Image: Gregory J. Wiepz/UW-Madison

According to the Centers for Disease Control, listeria makes about 1,600 Americans sick each year — a relatively small number, but a group heavy on newborn babies and older adults with undeveloped or weak immune systems.

“The problem with this organism is not a huge number of cases. It’s that when it is identified, it’s associated with severe outcomes,” says Charles Czuprynski, a UW–Madison professor of pathobiological sciences and director of the UW–Madison Food Research Institute.

Pregnant women are warned to avoid many of the foods — among them unpasteurized milk and soft cheese, raw sprouts, melon and deli meats not carefully handled — that can harbor listeria, because the bacterium is known to cause miscarriage and stillbirth, and spur premature labor. Those severe outcomes have resulted in a zero-tolerance regulatory policy for listeria in ready-to-eat foods. But when it occurs, listeria infection in pregnancy may go unnoticed. The few recognizable symptoms are nearly indistinguishable from the discomfort most newly pregnant women feel.

“It’s striking that mom doesn’t get particularly ill from listeria infection, but it has a profound impact on the fetus,” says Golos, whose work is funded by the National Institutes of Health. “That’s familiar now, because we’ve been talking about the same difference in Zika virus.”

Sophia Kathariou, a North Carolina State University professor of food science and microbiology, provided a strain of listeria that caused miscarriage, stillbirth and premature delivery in at least 11 pregnant women in 2000. Four pregnant rhesus macaques at the Wisconsin National Primate Research Center were fed doses of the listeria comparable to what one might encounter in contaminated food. Bryce Wolfe, a UW–Madison graduate student studying cellular and molecular pathology who is lead author of the study, monitored the speed and progression of listeria’s spread. 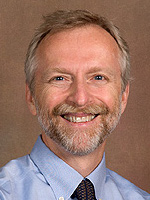 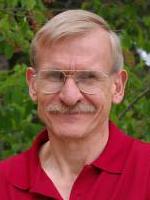 “What’s particularly striking about the work Bryce did is the detailed information we now have about the organism,” Czuprynski says. “The animal ingested it; she tracked it being shed in feces and showing up in the bloodstream. They did ultrasound analysis of the fetus, and could then show events in terms of where the organism was preceding fetal demise.”

None of the monkeys showed obvious signs of infection before their pregnancies came to abrupt ends. But in tissue samples taken after each monkey experienced intrauterine fetal death, Wolfe found listeria had invaded the placenta — the connection between the mother-to-be and the fetus, which usually prevents transmission of bacteria — as well as the endometrium, the lining of the uterus.

“In that region, there’s a rich population of specialized immune cells, and it is exquisitely regulated,” says Wolfe. “When you introduce a pathogen into the midst of this, it’s not very surprising that it’s going to cause some sort of adverse outcome disrupting this balance.”

The researchers believe the inflammation caused by the maternal immune response to the fast-moving listeria also affects the placenta, keeping it from protecting the fetus.

“There are effective antibiotics available. It is treatable. The issue is that because it’s asymptomatic, the fetus may be infected by the time anyone realizes the mother was infected.”

“It should be a barrier,” Golos says. “But we’re hypothesizing that the maternal immune system’s attempt to clear the bacteria actually results in collateral damage to the placenta that then allows the bacteria to invade the fetus.”

The results suggest listeria (and perhaps other pathogens) may be the culprit in some miscarriages that usually go without diagnosed cause, but the bacteria’s stealth and speed may still make it hard to control.

“There are effective antibiotics available. It is treatable,” Wolfe says. “The issue is that because it’s asymptomatic, the fetus may be infected by the time anyone realizes the mother was infected.”

Golos and Wolfe plan to continue work with listeria to better define how the bacterium targets the reproductive tract, its incubation time and the problems it causes leading up to miscarriage. Their goal is to provide basic knowledge about the progression of infection and the maternal immune response to intracellular pathogens in pregnancy, which may help other researchers battling similar dangers such as Zika virus.