Researchers at the University of Wisconsin–Madison have found a switch that redirects helper cells in the peripheral nervous system into “repair” mode, a form that restores damaged axons.

Axons are long fibers on neurons that transmit nerve impulses. The peripheral nervous system, the signaling network outside the brain and spinal cord, has some ability to regenerate destroyed axons, but the repair is slow and often insufficient.

The new study suggests tactics that might trigger or accelerate this natural regrowth and assist recovery after physical injury, says John Svaren, a professor of comparative biosciences at the UW–Madison School of Veterinary Medicine. The finding may also apply to genetic abnormalities such as Charcot-Marie-Tooth disease or nerve damage from diabetes. 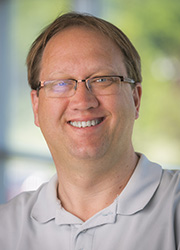 Svaren, senior author of a report published Aug. 30 in The Journal of Neuroscience, studied how Schwann cells, which hug axons in the peripheral nervous system, transform themselves to play a much more active and “intelligent” role after injury.

Svaren and his graduate student, Joseph Ma, compared the activation of genes in Schwann cells in mice with intact or cut axons. “We saw a set of latent genes becoming active, but only after injury,” says Svaren, “and these started a program that places the Schwann cells in a repair mode where they perform several jobs that the axon needs to regrow.”

In the repair mode, but not in the normal one, Schwann cells start cleaning house, helping to dissolve myelin, which is essential for proper functioning but ironically deters regeneration after injury. “If you invite Schwann cells to a party,” says Svaren, “they will clean up the bottles and wash your dishes before they leave the house.”

This cleanup must happen within days of the injury, says Svaren, who directs the cellular and molecular neuroscience core at the Waisman Center on the UW–Madison campus.

The Schwann cells also secrete signals that summon blood cells to aid the cleanup, and they map out a pathway for the axon to regrow. Finally, they return to the insulator role to grow a replacement myelin sheath on the regenerated axon. 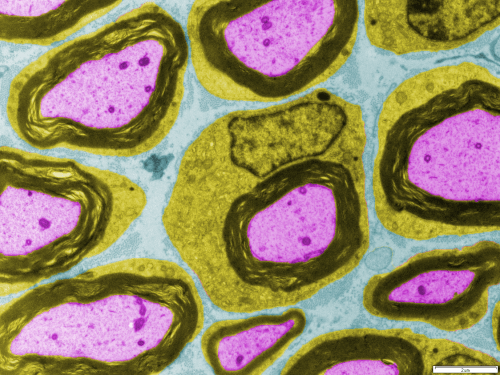 Supportive Schwann cells (green) surround the conductive axon (purple) of a neuron in the peripheral nervous system in this artificially colored image. A new study by John Svaren shows that Schwann cells not only make the insulating myelin (black), but also are active players in axon repair after damage. Image: John Svaren

Unexpectedly, the Schwann’s transition into the repair form did not entail a reversion to a more primitive form, but rather was based on a change in the regulation of its genes. “Almost every other nervous-system injury response, especially in the brain, is thought to require stem cells to repopulate the cells, but there are no stem cells here,” Svaren says. “The Schwann cells are reprogramming themselves to set up the injury-repair program. We are starting to see them as active players with dual roles in protecting and regenerating the axon, and we are exploring which factors determine the initiation and efficacy of the injury program.”

After the human genome was deciphered, epigenetics — the study of gene regulation — has moved to the forefront with the realization that genes don’t matter much until they are switched on, and that genetic switches are the fundamental reason why a skin cell doesn’t look like a nerve cell, and a nerve cells functions differently than a white blood cell.

In epigenetics, as elsewhere in biology, processes are often regulated through a balance between “stop” and “go” signals. In the Schwann cell transition, Svaren and Ma identified a system called PRC2 that usually silences the repair program. “This pathway amounts to an on-off switch that is normally off,” Svaren says, “and we want to know how to turn it on to initiate the repair process.”

The new study suggests tactics that might trigger or accelerate this natural regrowth and assist recovery after physical injury.

The nature of the top-level gene-silencing system suggested drugs that might remove the silencing mark from the genes in question, and Svaren says he’s identified an enzyme that may “remove the brakes” and deliberately activate the repair program when needed in response to injury.

Even if the drug tests are promising, years of experiments will be necessary before the system can be tested in people. Furthermore, as Svaren acknowledges, “many factors determine how well an axon can regenerate. I am not saying this single pathway could lead to a cure-all, but we do hope it is an important factor.”

Svaren says it’s not clear how the current finding on peripheral nerves relates to damage to the brain and spinal cord, where a different type of cell cares for neurons. There are some similarities, however. In multiple sclerosis, for example, cleanup must precede the replacement of damaged myelin.

Ultimately, the study could open a new door on regeneration, even beyond one key sector of the nervous system. “We have thought of the Schwann cell as a static entity that was just there to make myelin, but they have this latent program, where they become the first responders and initiate many actions that are required for the axon to regenerate,” Svaren says.