Having cows put proteins into milk, not waste, is researcher’s goal 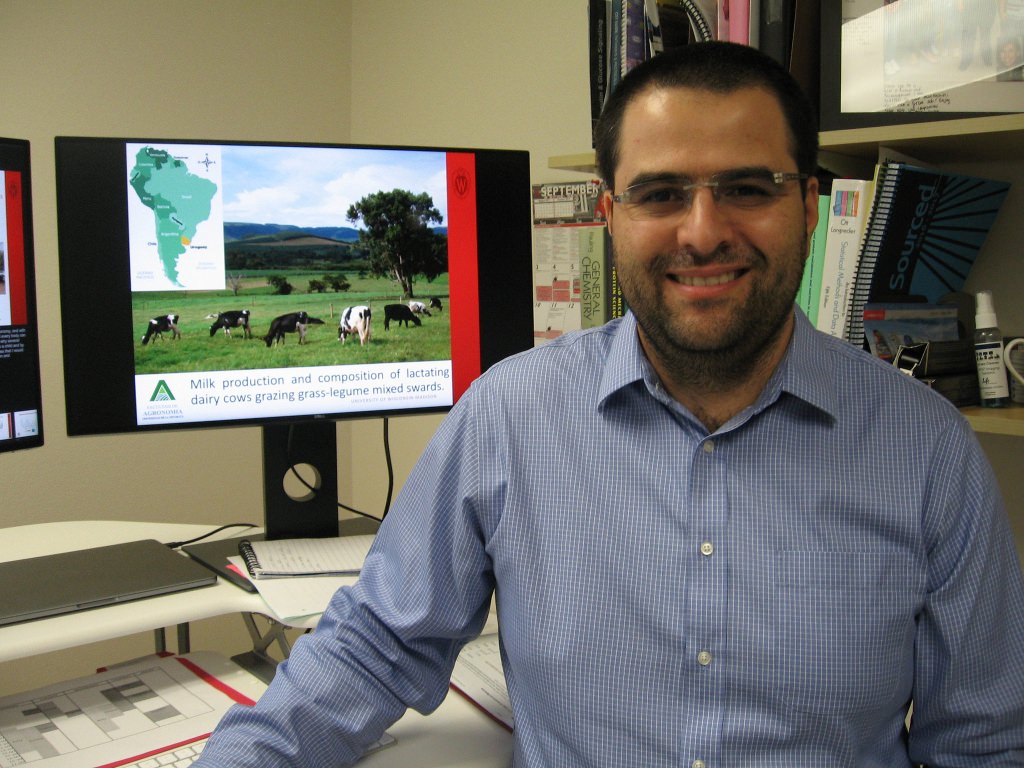 Sebastian I Arriola Apelo joined the UW–Madison dairy science department this summer as an assistant professor.

The University of Wisconsin–Madison has hired a new investigator to look into the case of the misplaced protein.

“On average, only about a quarter of the crude protein in a dairy ration goes to milk,” says Sebastian I Arriola Apelo, who joined the UW dairy science department this summer as an assistant professor. “The rest is excreted, basically, in urine and feces.

“We can add more proteins to the diet and produce more milk to match the genetic potential of the animal, but that is very inefficient,” he says. “We have to formulate better diets where the cow consumes less protein or less nitrogen and still produces the same amount of milk and milk components.”

Arriola Apelo’s appointment fills a void created by the retirement of Louis Armentano, who specialized in ruminant nutrition physiology. Like Armentano, Arriola Apelo is interested in the biochemical processes that govern feed efficiency. He earned his Ph.D. in dairy science from Virginia Tech and then spent three years conducting research at the UW–Madison School of Medicine and Public Health. The medical research helped him prepare for his dairy work, because the metabolic processes he studies are similar in humans and cows.

“What we study (in our lab) is how nutrients, once they reach the cells in the mammary gland, tell the cell to produce more milk or more milk proteins — how they talk to the cell,” Arriola Apelo explains.

Since this kind of signaling is conserved across mammals, Arriola Apelo can study this phenomenon in the cells of genetically mutated mice. Specifically, he is looking at how the 20 amino acids — which are the building blocks of protein, the main source of nitrogen in dairy cow rations — contribute to milk protein production.

“We are trying to see how much of each amino acid we need to deliver to the mammary gland and how we are going to deliver them,” he says. “In order to improve nitrogen efficiency, we need to feed less and better, meaning diets with less protein content and a better profile of amino acids. To get to that point, we not only need to know which amino acids are important, but also how the cow responds to those amino acids from a quantitative standpoint.”

“I’m interested in finding a mathematical function that better represents the effect of amino acids on signaling pathways and on milk protein synthesis, so the cow can make the best use of dietary nitrogen, putting more into milk and less in urine and feces,” Arriola Apelo says.

Arriola Apelo’s ability to quantify what happens to nutrients at the cellular level will be extremely useful as dairy nutritionists seek to translate the findings from cell-level research into practical models for feeding dairy cows, says Louis Armentano.

“We’re trying to find out more about the biological mechanisms that cause relationships between what we feed and how the cow responds. But somehow we have to tie that back to our whole animal numerical models. This requires both deductive, component research along with quantitative skills that allow us to integrate this cellular knowledge and then make sure our new models work better than our old ones.

“Sebastian is kind of unique in being trained to do both types of things, and do both well, so he is well equipped to aid in this development.”

In addition to his research, Arriola Apelo will also teach courses related to ruminant nutrition for both undergrads and graduate students. He says that it’s important that students have a solid understanding of the emerging science behind the rapid changes in dairy feeding technology.

“Students are already learning how to balance rations with a computer. But in order to integrate everything from genomics, to cow behavior, to nutrient excretion, to the environment, we will need much more complex software,” he says. “Students have to learn how to be ready to apply dairy nutrition information that’s not available yet but will be available in the near future. Basic science has a huge role there. Tomorrow they’ll be using different software. But if they understand the basic science, then learning the software is an easier task.”

Arriola Apelo’s current research is supported by campus start-up funds and a Hatch grant from the U.S. Department of Agriculture’s National Institute of Food and Agriculture.