A network of researchers in the United States and Canada will try to spare thousands of patients the dangers of heart attacks and hospitalizations over the next five years in a trial of a high-dose flu vaccine.

Influenza kills about 36,000 Americans a year, puts more than 200,000 in the hospital, and presents a particularly high risk to people with heart problems. 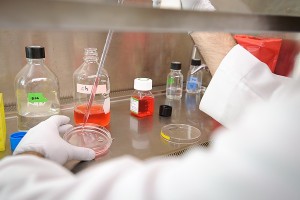 A researcher separates cells at a UW–Madison lab. A new trial aims to test out a high-dose flu vaccine. Photo: Jeff Miller

“People with heart disease are especially susceptible to getting worse if they get the flu,” says Orly Vardeny, a UW–Madison professor of pharmacy and co-principal investigator for a flu vaccine trial that plans to enroll more than 9,000 participants in the United States and Canada over the next four flu seasons. “Some of the same mechanisms that make heart disease worse are exacerbated by an infection — influenza infection in particular.”

The trial, supported by a $21 million grant from the National Institutes of Health’s National Heart, Lung, and Blood Institute, will test the idea that a dose of vaccine four times the size of the usual shot will better protect patients suffering from heart failure or who have had a heart attack in the last year.

In otherwise healthy people, the standard vaccine prompts a mild reaction that prepares the immune system for an encounter with any one of several types of influenza viruses expected to circulate during a flu season. But research Vardeny began 10 years ago at UW–Madison shows that heart failure patients don’t get the same boost.

“Their response to the vaccine is blunted compared to people without heart failure,” she says, “which means their bodies didn’t mount a good immune response that would normally be protective when they encounter the virus.”

But, in a study published in 2013, Vardeny showed that a double dose of flu vaccine sparked a better response in heart failure patients. An analysis of other heart disease studies by Jacob Udell, a cardiologist and professor at the University of Toronto and co- investigator of the new vaccine trial, showed that flu vaccination reduced the risk of heart attack in susceptible patients — especially among those with a recent heart attack — and that higher doses of flu vaccine may be more beneficial.

Armed with results from studies that began at UW–Madison with dozens of participants, Vardeny and co-principal investigator Scott Solomon, a cardiologist at Boston’s Brigham and Women’s Hospital and Harvard Medical School professor, collaborated with Udell and others at the University of Toronto, the U.S. Department of Veterans Affairs and the National Patient-Centered Clinical Research Network to design a large-scale study aimed specifically at heart patients.

The INVESTED Trial (short for “Influenza Vaccine to Effectively Stop Cardio Thoracic Events and Decompensated Heart Failure”) will begin enrolling thousands of participants in a few weeks at about 180 clinics and hospitals.

“INVESTED will be the first large trial to test whether a novel influenza vaccination strategy will lead to reduced hospitalization or death in a vulnerable population,” says Solomon, who recently completed a similarly large and very successful trial of a new drug treatment for heart failure. “If successful, the public health impact could be substantial.”

Half the trial’s participants will receive a high-dose vaccine approved by the Food and Drug Administration for patients over 65 — a group that, like heart patients, often suffers a weakened immune response. Studies have shown the more potent vaccine has proven to reduce infections in elderly subjects.

“INVESTED will be the first large trial to test whether a novel influenza vaccination strategy will lead to reduced hospitalization or death in a vulnerable population.”

“We know they get less flu, but we don’t know if they had fewer heart attacks or were admitted to the hospital less often with heart problems,” Vardeny says. “So we will be following our participants to see if they end up in the hospital with anything a flu infection might make worse or a good vaccine response may help prevent — like lung infections such as pneumonia, worsening of their heart failure, even another heart attack.”

Alongside the study of high-dose vaccinations, the researchers will be testing methods for running large clinical trials that may make them more efficient, cheaper and less of a burden for participants. The INVESTED researchers say their trial is a perfect test bed for improvements, because it’s just one shot, once a year. It doesn’t require daily doses or return trips to a clinic for treatment.

On the other hand, timing is vital to the trial’s success.

“With other studies, you have all year to sign people up,” says Vardeny. “With this, especially in the United States, people are getting their flu shots earlier and earlier every year. They’re checking that off their list as early as August, and we need to try to catch them before they do.”