Fifteen years ago, University of Wisconsin–Madison researcher Meg Wise began interviewing cancer patients nearing the end of life about how they were living with their diagnosis. She was surprised to find that many asked for a transcript of the interview, saying that they had not talked about these issues with family or friends.

“I would think, wait a minute,” Wise recalls. “You’ve had stage 4 lung cancer for eight months, and this is the first time you’ve talked about it?”

The Journal of Palliative Medicine recently published the latest study in Wise’s exploration of resilience in advanced cancer – what she calls “mortal time.” It found that delivering an edited life and cancer story elicited by a phone conversation measurably enhances the sense of peace in the face of looming death. 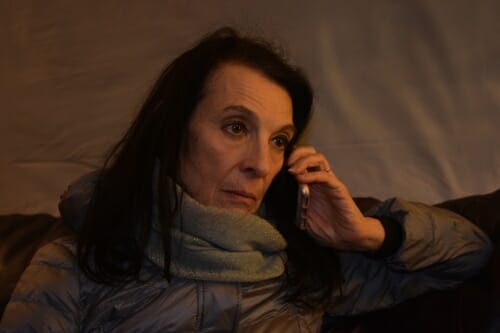 A new study from UW–Madison researcher Meg Wise, above, found that delivering an edited life and cancer story elicited by a phone conversation measurably enhances the sense of peace in the face of looming death. David Tenenbaum

An advanced-stage cancer diagnosis often brings chaos and stress. Managing pain, exhaustion, medical appointments and finances make it hard for patients to reckon with questions of legacy and stave off depression.

When Wise, now an associate scientist in the Sonderegger Research Center at UW–Madison’s School of Pharmacy, began studying what could help people cope with cancer, she became fascinated by an incidental finding: “The pause after describing how cancer sucks. Some people say, ‘You know, in some ways, my life is better since I was diagnosed. Family is more important. I don’t sweat the small stuff,’” Wise says. “I got interested in that piece of resilience. What’s the silver lining in this?”

Wise then interviewed advanced cancer patients to learn more about their journey from despair to resilience to inform the development of what she thought would be an online self-help program. Her subjects requested a transcript of their interviews, noting it was the first time they’d said much about their illness.

“Gradually it dawned on me that telling the story itself might be a better intervention than a computer-guided self-help tool,” Wise recounts.

She was drawn to the work of a Canadian psychiatrist, Harvey Chochinov, whose “dignity therapy” involved two or three clinician-led, bedside interviews of hospice patients about their lives to develop a legacy document for patients to share with their loved ones.

A decade ago, Wise and colleagues developed and piloted “miLivingStory,” which combines the life review aspects of dignity therapy with reflective cancer narrative.

In an effort to reduce the time and professional labor — costs that are less palatable to U.S. healthcare providers, according to Wise, the story was elicited by telephone interview and patients were given online tools to revise and share their story. The newly-published study, which was supported by the National Cancer Institute, evaluated the effects with late stage cancer patients.

“Taking that space to reflect on your life, on the cancer journey — and not feeling like you’re burdening somebody to do it — turned out to be very fulfilling.”

More than 80 people diagnosed with stage 3 or 4 cancer were randomized into one of two groups that were given access to either a selection of online help for cancer patients (planning tools, support groups and literature from the National Cancer Institute and the American Cancer Society) or to miLivingStory.

miLivingStory included the online resources, plus two phone calls with Wise — one to get acquainted and one a storytelling interview. Suggested topics included important accomplishments and difficulties overcome, the effects of their cancer on them and their family, and how they’d like to be remembered in 20 or 30 years.

“What most people wanted to be remembered for was how they treated others,” says Wise. “They told us about adventures and very personal moments and triumphs. They addressed a lot of it to their families.”

The researchers organized, using the patient’s own words, the thoughts and recollections and feelings, and produced a manuscript that patients could share with their friends and family.

“Taking that space to reflect on your life, on the cancer journey — and not feeling like you’re burdening somebody to do it — turned out to be very fulfilling,” Wise says.

According to a standard survey used to assess the wellbeing of the chronically ill, the miLivingStory participants felt far more at peace four months after the storytelling process, and experienced less depression than their counterparts who had access only to the online support resources.

“The control group was really declining, and that’s what you’d imagine. You’re dying of cancer. You’re feeling worse, getting more scared,” Wise says. “But for the storytelling group, not only do you have increased peace, but you have some protective effect against that decline in meaning and mood.”

The benefits of a non-clinician telephone and online story intervention are promising, according to Wise.

“People don’t necessarily take the time to think and talk about these things. A lot of people have to keep working throughout their illness,” says Wise, whose work is funded by the National Cancer Institute. “We had one participant tell us, ‘There really isn’t another time to say that, what’s in your heart.’”

The research team, which included UW–Madison professor of human development and family studies Linda Roberts and collaborators at the University of Washington and University of Kentucky, noted that the stories spun by patients could also help health care providers by reminding them of the meaning and hope and value their patients gather even after their diagnoses.

This research was supported by the National Cancer Institute (5R21CA129890).