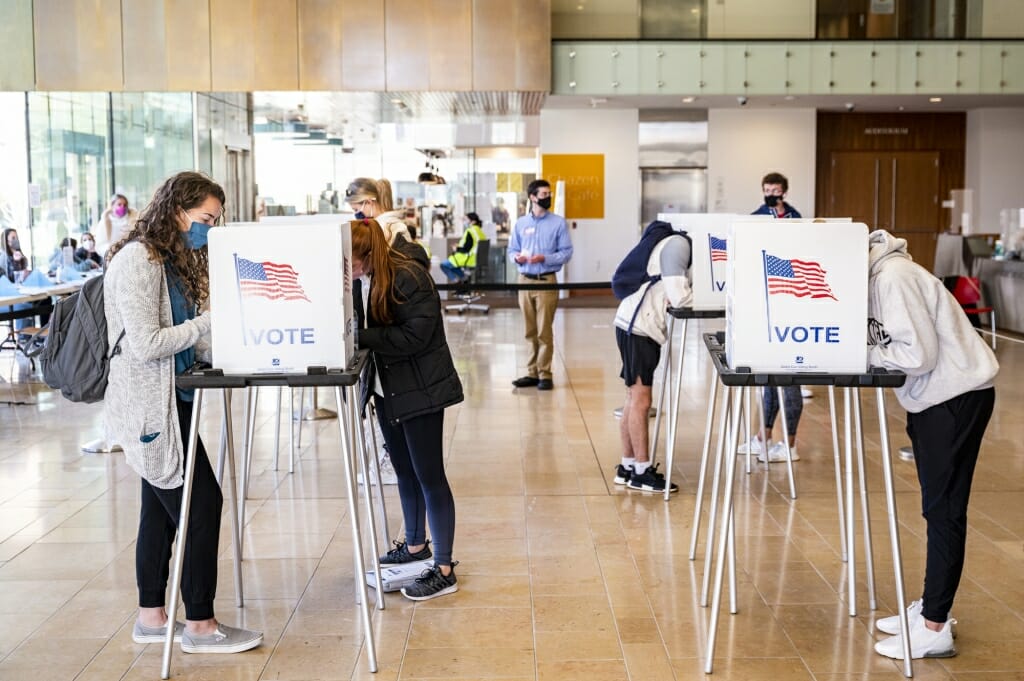 University of Wisconsin–Madison student voter turnout increased 7.4 percentage points in last year’s presidential election, rising to 72.8 percent of eligible students in 2020 from a rate of 65.4 percent in 2016.

UW–Madison’s rate was higher than the 66 percent voting rate of all colleges and universities measured in the report from the Institute for Democracy & Higher Education, creators of the National Study of Learning, Voting, and Engagement, or NSLVE.

“Our student body and the BadgersVote team should be proud that so many of our eligible students overcame the challenges of the pandemic to cast ballots in the presidential election,” says Barry Burden, political science professor and faculty chair of BadgersVote, a campus-wide initiative that aims to provide UW–Madison students with everything they need to participate in elections.

The report showed that 24,572 UW–Madison students voted, out of 33,749 who were eligible, in the 2020 election. The full campus report can be viewed here.

At UW–Madison, student voting turnout efforts were coordinated by BadgersVote, a partnership between the Morgridge Center for Public Service, the Madison City Clerk’s Office, Associated Students of Madison, University Communications and a number of other campus units.

“I’m excited to see the increase in student turnout for the 2020 election knowing that each and every vote contributed to the democratic process,” said Zachery Holder, voter engagement and civic learning coordinator with BadgersVote.  “I’m also proud of the many students and campus partners who worked with BadgersVote to raise awareness of the election, and to provide voting key information to students.”

UW­–Madison also joined more than 160 colleges and universities in striving for full student voter registration and participation through the nonpartisan All In Campus Democracy Challenge.

“We encourage our students to stay informed, participate in political conversations, and cast their votes,” said Chancellor Rebecca Blank, who signed the Higher Education Presidents’ Commitment to Full Student Voter Participation. “Civic participation is what makes our democracy work.”

Other items from the report about UW­–Madison student voting:

Nationwide, the study’s authors report a record-breaking set of findings. On campuses across the country, students built on the momentum swing of 2018 and voted at high rates in the 2020 election, with voter turnout jumping to 66 percent in last year’s presidential election. The 14 percentage point increase, from 52 percent turnout in the 2016 election, outpaces that of all Americans, which jumped 6 percentage points from 61 percent to 67 percent, according to the U.S. Census Bureau.

“That students, often younger and first-time voters, turned out at rates commensurate with the general public is nothing short of stunning,” said IDHE Director Nancy Thomas. “We attribute this high level of participation to many factors, including student activism on issues such as racial injustice, global climate change and voter suppression, as well as increased efforts by educators to reach students and connect them to the issues and to voting resources.