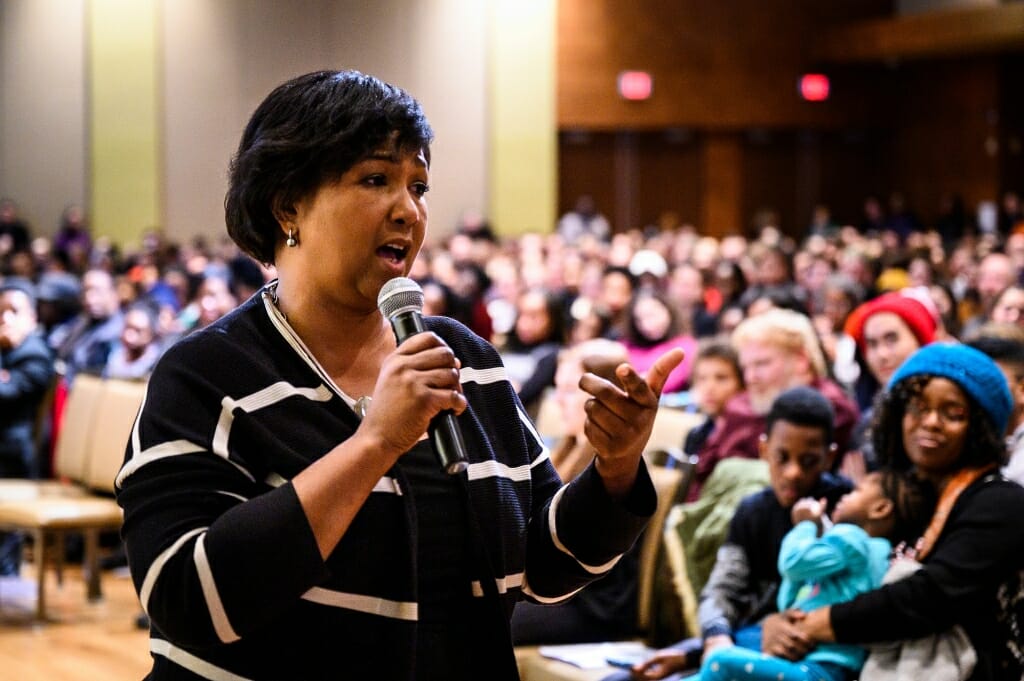 Jemison offered advice to students who may be struggling, especially students of color on predominantly white campuses: “You have every right to be there. You have every talent and potential. So just know that. We need you. The world needs your contributions.” Photo: Jeff Miller

As a graduate student in environmental engineering, Coty Weathersby makes a point of connecting with other women in STEM fields for support and inspiration, especially women of color like herself.

On Tuesday, she experienced what she called “a truly life-changing” evening. She got to hear — and even briefly meet — Dr. Mae Jemison, the first woman of color in space.

“She reaffirmed that the stars truly are the limit and you can do anything you set your mind to,” said Weathersby, of Milwaukee, a first-year master’s degree student at the University of Wisconsin–Madison.

Jemison, a former NASA astronaut, spoke to an appreciative, overflow crowd of more than 1,100 people in Varsity Hall at Union South as keynote speaker for the Martin Luther King Jr. Memorial Lecture. The event, which coincided with the first day of classes for the spring semester, was sponsored by Student Affairs, in partnership with the Division of Diversity, Equity and Educational Achievement and the Morgridge Center for Public Service. Chancellor Rebecca Blank spoke, and Wisconsin Lt. Gov. Mandela Barnes introduced Jemison. 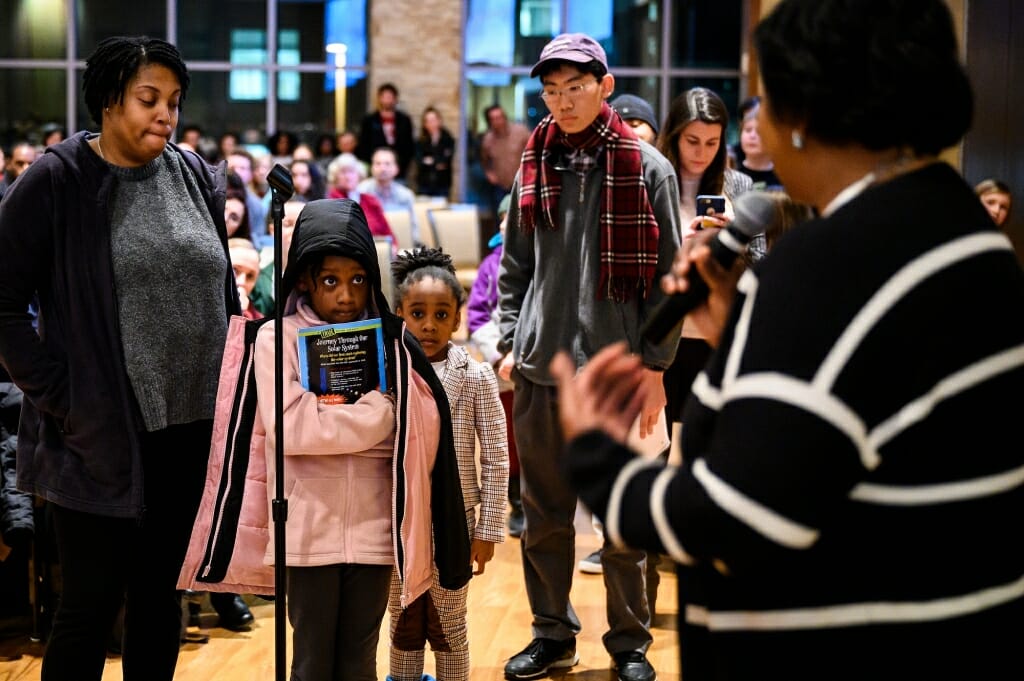 Jemison steps off stage to answer seven-year-old Aleisha Gavins' question “Did people ever doubt you?” Photo by: Jeff Miller 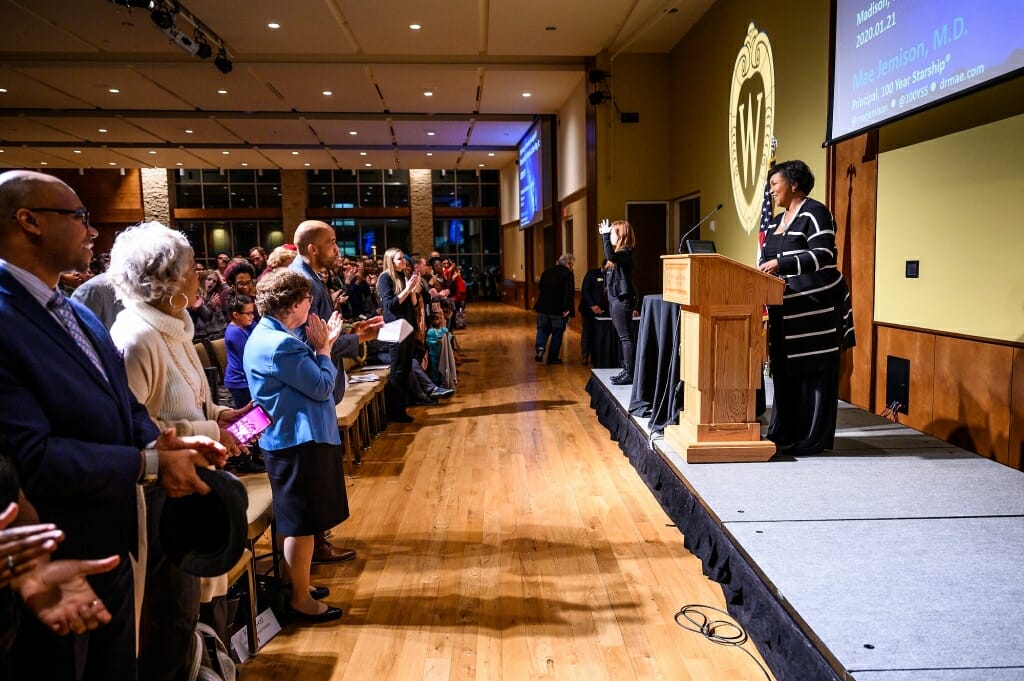 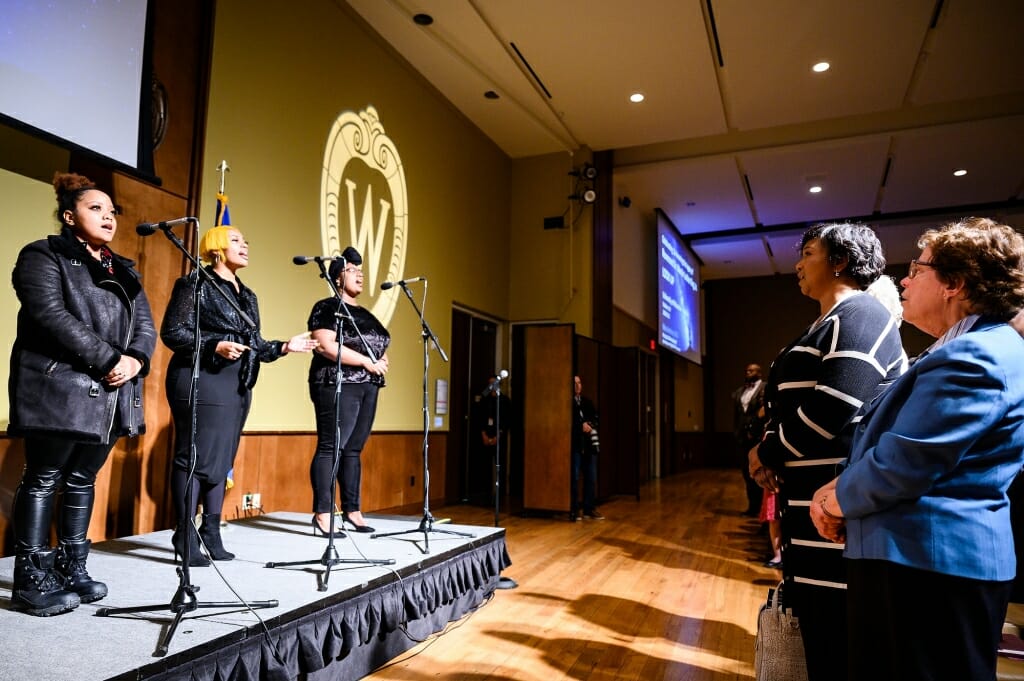 Members of the UW Gospel Choir perform before the event. Photo by: Jeff Miller 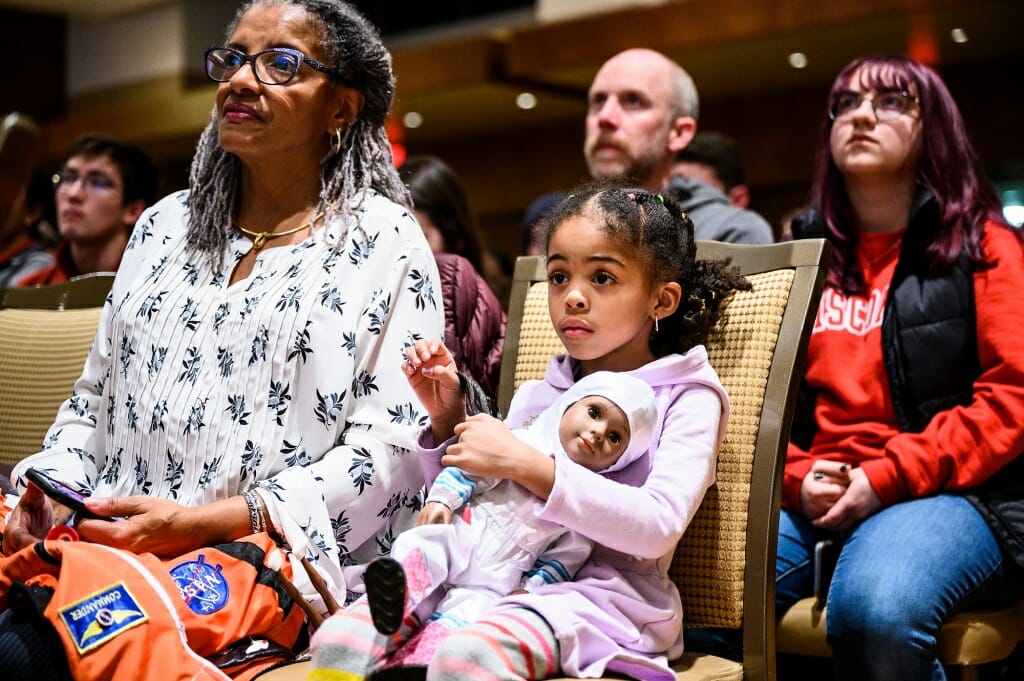 Raygan Lawrence, 6, holds her NASA doll as she and grandmother Phyllis Holder listen to Jemison's speech. Holder is a 1976 alumna from the UW–Madison School of Nursing. Photo by: Jeff Miller 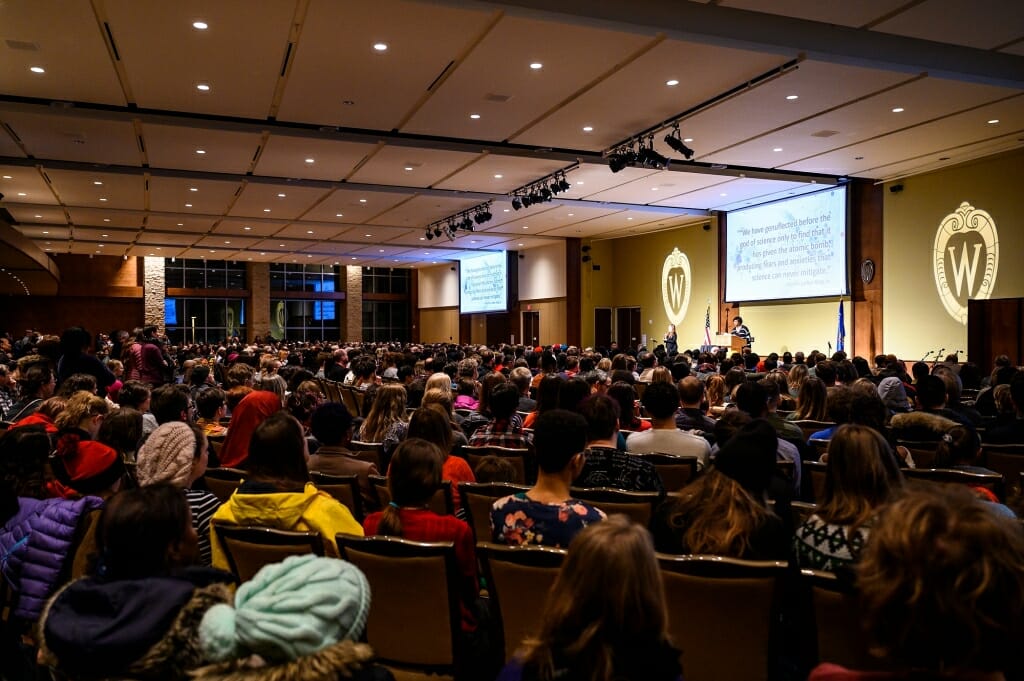 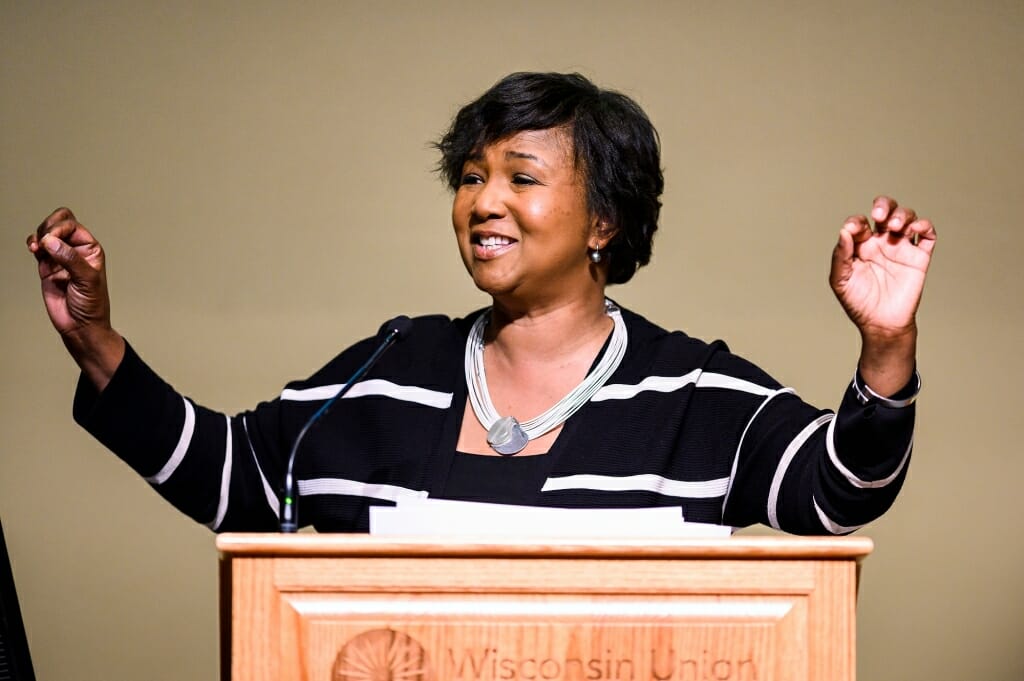 Jemison opened her speech by asking "When was the last time you looked up?" Photo by: Jeff Miller 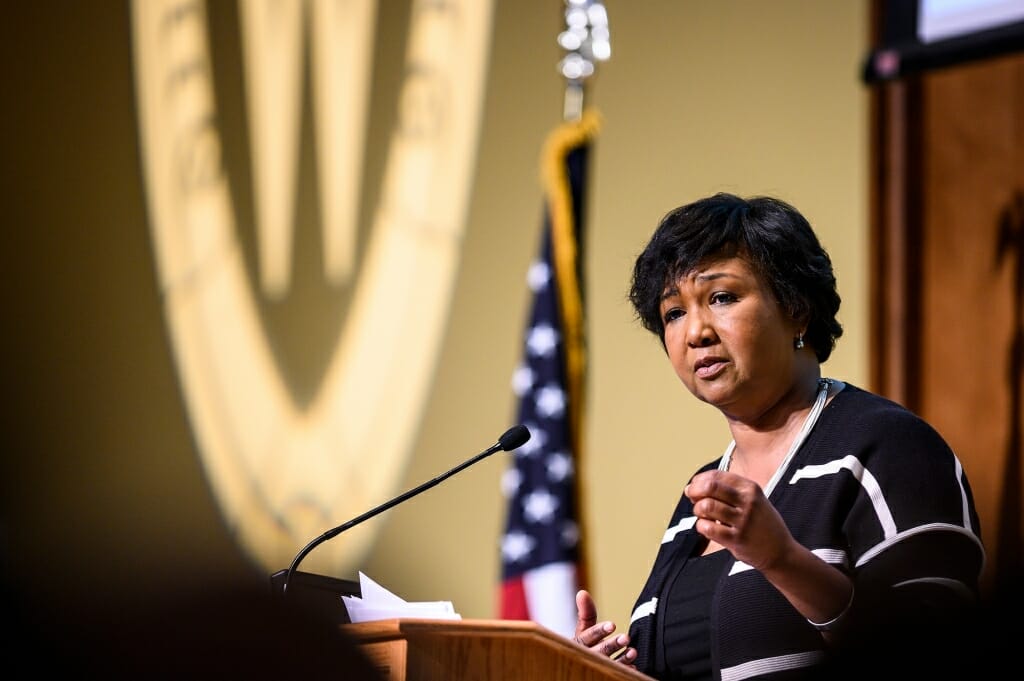 “We look up for guidance and hope, and I think very much that connects us to Dr. King because his work was really about looking up — that inspiration,” Jemison said. Photo by: Jeff Miller 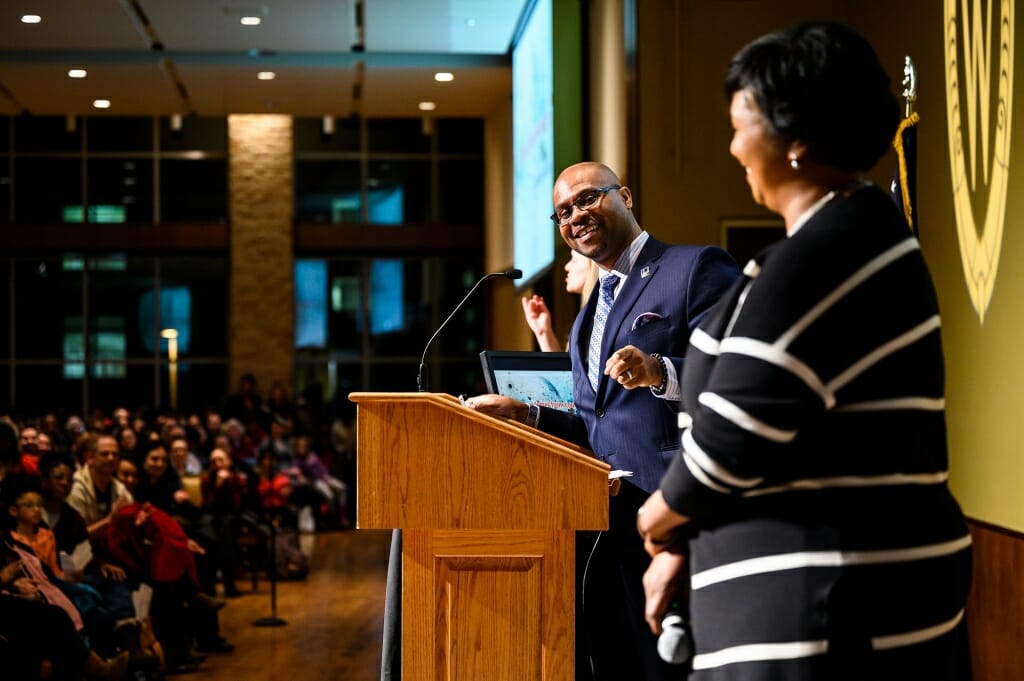 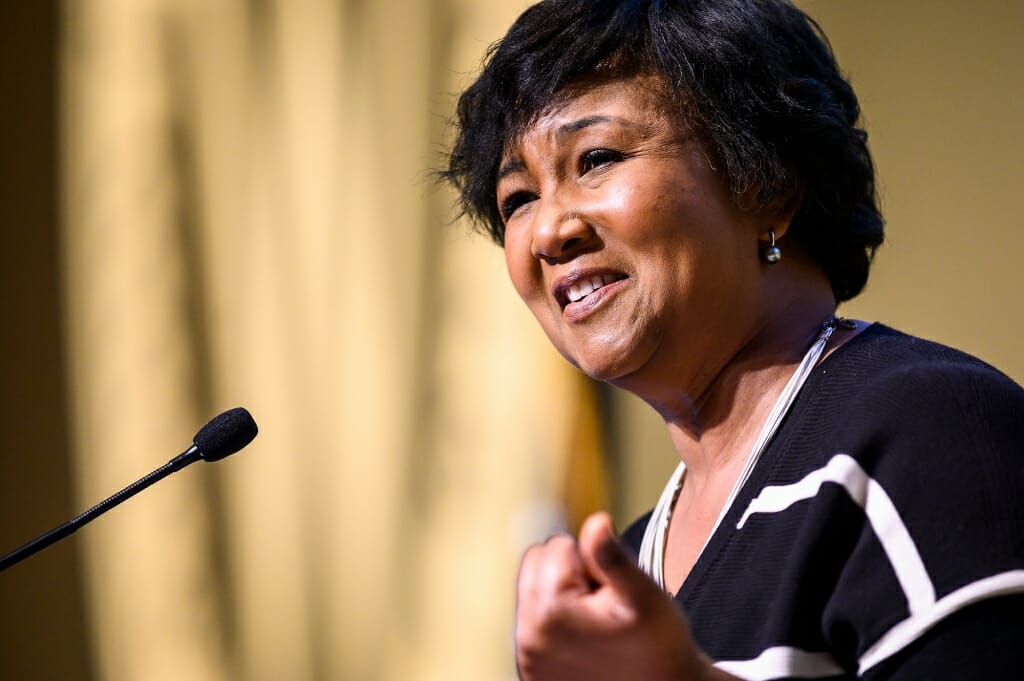 “If I was really taking to heart what other people thought about me I might have dropped out like so many women do — and continue to do,” Jemison said. Photo by: Jeff Miller 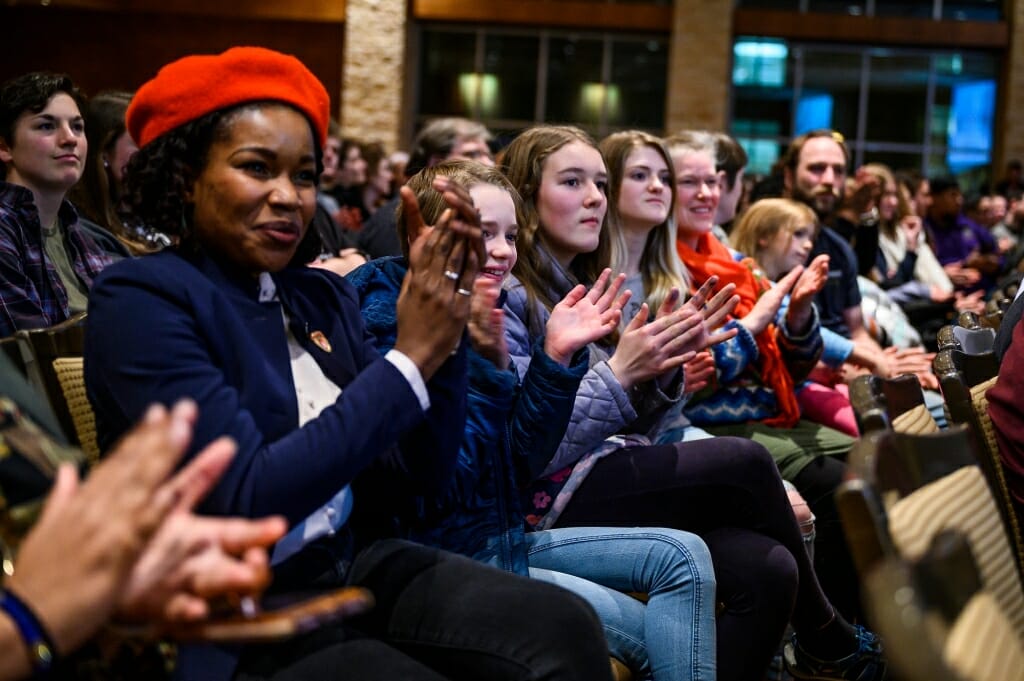 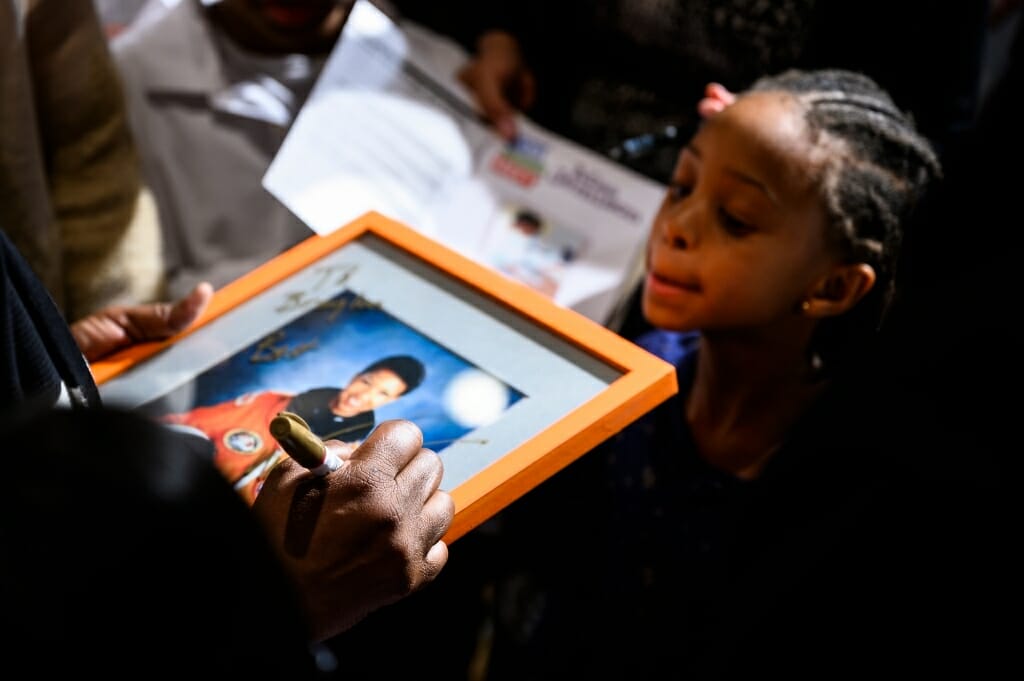 Jemison signs memorabilia for her fans. Photo by: Jeff Miller

The audience, which gave Jemison three standing ovations, included several children dressed in astronaut costumes. Kids asked many of the questions during a lively Q&A, including the first one: “What was it like being in space without space sucking you out?”

“So, it’s good when space doesn’t suck you out,” Jemison responded, to laughter. She went on to call her time with NASA “an incredible adventure and an incredible job.”

Jemison, an entrepreneur and advocate for science education, logged 126 orbits of the Earth during a nearly eight-day trip aboard the Space Shuttle Endeavour in 1992. A physician with an undergraduate degree in chemical engineering, she was NASA’s first science mission specialist, performing experiments in material science, life science and human adaptation to weightlessness.

Jemison opened her talk by asking the crowd, “When was the last time you looked up?”

It’s important to do so, she said, because it means you’re looking at something bigger than yourself. As a child, she wondered if kids on the other side of the world were seeing the same sky.

“We look up for guidance and hope, and I think very much that connects us to Dr. King because his work was really about looking up — that inspiration,” she told the crowd. “It’s a connection with the people around the globe.”

Jemison said that, to her, King was “forceful, radical, intolerant of injustice, and impatient with ignorance.” She said King would want us to cultivate our talents and to use those talents to create something positive in the world.

Among her many achievements, Jemison has created an international space camp for middle- and high-schoolers, and a program with the Los Angeles public schools to give hundreds of teachers new tools and techniques for hands-on science education. She is the leader of 100 Year Starship, a nonprofit global initiative to pursue human travel beyond our solar system to another star within the next 100 years — and transform life on Earth in the process.

Born in Alabama, Jemison grew up in Chicago, where she played with chemistry sets and became a fan of the original “Star Trek” television series. (Fun fact: she would go on to become the first real astronaut to appear on the show!) By age 8, she had decided she’d go into space one day. It didn’t bother her that no other astronaut yet looked like her; as a kid, she felt she owed it to extraterrestrials to diversify space travel.

“I actually thought, what happens if the aliens only see these guys and they think everybody on Earth is a buzz-cut haired white male?” she said at a press conference that preceded her talk.

Asked by a reporter if she faced challenges as a female undergraduate in chemical engineering, Jemison, who enrolled at Stanford University at the age of 16, said she grew up confident in her abilities. Yet she “had professors who were not too thrilled to have me in their classes, and that was the first time that had happened . . . the first time someone had questioned my intellectual capabilities.”

Her advice to students who may be struggling, especially students of color on predominantly white campuses: “You have every right to be there. You have every talent and potential. So just know that. We need you. The world needs your contributions.”

On her space flight, Jemison took with her items close to her heart, including one representing Alpha Kappa Alpha, a college sorority for African-American women established in 1908. Jemison is an honorary member. Tuesday evening, members of UW–Madison’s Alpha Kappa Alpha chapter, Epsilon Delta, were special guests at a private reception for Jemison.

“For her to do something so extraordinary and so rare, and to get to hear her speak on Martin Luther King Jr.’s legacy, it’s almost surreal,” said Mathis, a junior from Milwaukee studying neurobiology and psychology. She called Jemison’s speech “extremely enlightening.”

“I really like the point she made of how we have to consider what it is that we will bring to the table once we get there,” Mathis said.

“I do know that I’ll be looking up at the sky as I leave here,” she said.