Forty-five years ago this Sunday, on Dec. 31, 1972, the U.S. Environmental Protection Agency issued a press release. “The general use of the pesticide DDT will no longer be legal in the United States after today,” it said.

That momentous decision was made in part because of the work of Joseph Hickey, a University of Wisconsin–Madison graduate, professor and leading American ornithologist. 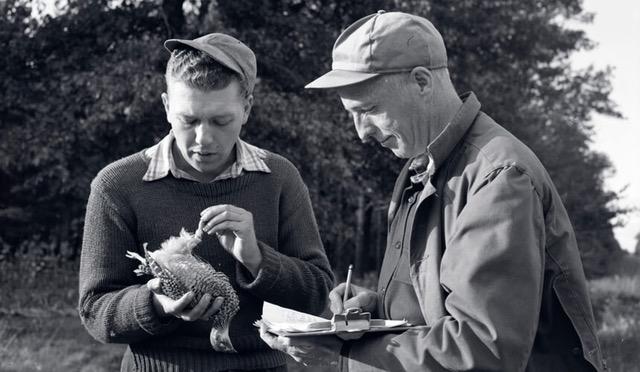 Joseph Hickey, right, conducting a grouse survey in 1951. Hickey loved watching birds, and he wanted others to enjoy the pastime. UW Archives

Hickey was recruited to UW–Madison by famed conservationist Aldo Leopold. Hickey earned his master’s degree in biology in 1943 and became, after Leopold, Wisconsin’s second professor of wildlife management.

Hickey was a central figure in the efforts to ban the use of chlorinated hydrocarbon pesticides such as DDT, both in Wisconsin and across the country. During a 1965 conference on the peregrine falcon, Hickey championed a brave stance — given the state’s deep roots in agriculture — by showing a connection between pesticides and declining bird populations. 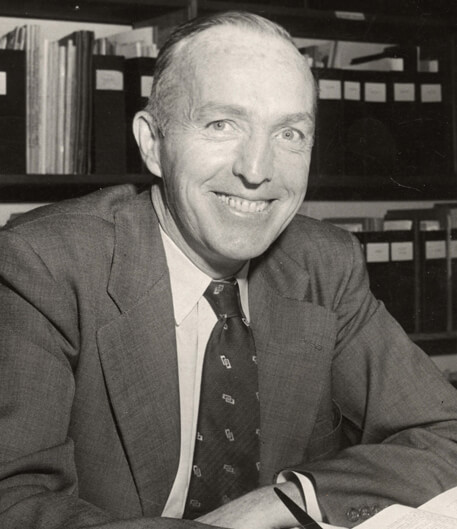 Hickey was a central figure in the efforts to ban the use of chlorinated hydrocarbon pesticides such as DDT. UW Archives

He’d always studied peregrines, but that interest intensified when they started dying. “As one of the few birds with a worldwide population, the peregrine falcon signaled that the threat wasn’t just a local phenomenon, but must be something happening at a global scale,” says Stanley Temple, a UW–Madison professor emeritus of wildlife management.

Before being in that spotlight, Hickey simply loved watching birds, and he wanted others to enjoy the pastime. For his UW thesis, he wrote “A Guide to Bird Watching,” which Oxford University Press immediately snapped up for publication. The book, which remains in print, “promoted bird watching as an activity that was perfectly in keeping with Leopold’s ideas about the potential importance of average citizens observing nature, interpreting those observations, and using the results to promote land health,” Temple says.

Shortly after Hickey joined the UW faculty, Leopold died unexpectedly. Hickey was appointed department chair, and he took on a mission: ensuring the publication of Leopold’s draft of A Sand County Almanac and illuminating the conservationist’s “land ethic” philosophy about the critical relationship between people and the land. 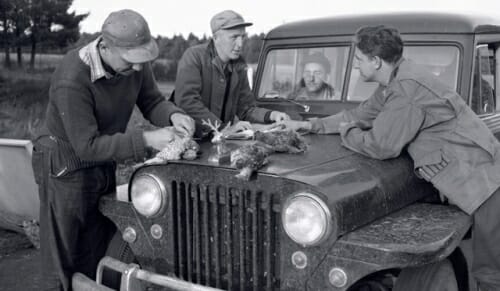 Though a devoted researcher and ornithologist, Hickey also embraced teaching. Students entering his classroom would hear gentle bird songs, and they eagerly awaited what Temple describes as “charming” lectures delivered with the Bronx accent that Hickey never lost as a transplanted Midwesterner. Enrollment in his classes grew during the 1960s and ’70s, mirroring students’ growing interest in environmental concerns. Despite earning many honors during his career, Hickey most cherished the Distinguished Teaching Award that the university bestowed in 1976.

“Conservation means more than preserving a few species of wildlife,” said Hickey. “It means the wise use of all the natural wealth of a great continent so that other generations of Americans can benefit by its resources and enjoy the same opportunities that we do today.”

Hickey and his conservation efforts are highlighted in the Alumni Way “Discovery” exhibit within the Wisconsin Alumni Association’s Alumni Park, which opened Oct. 6. The park is located between the Memorial Union and the Red Gym and is open year-round. For more information and a virtual tour of the park, please visit alumnipark.com.