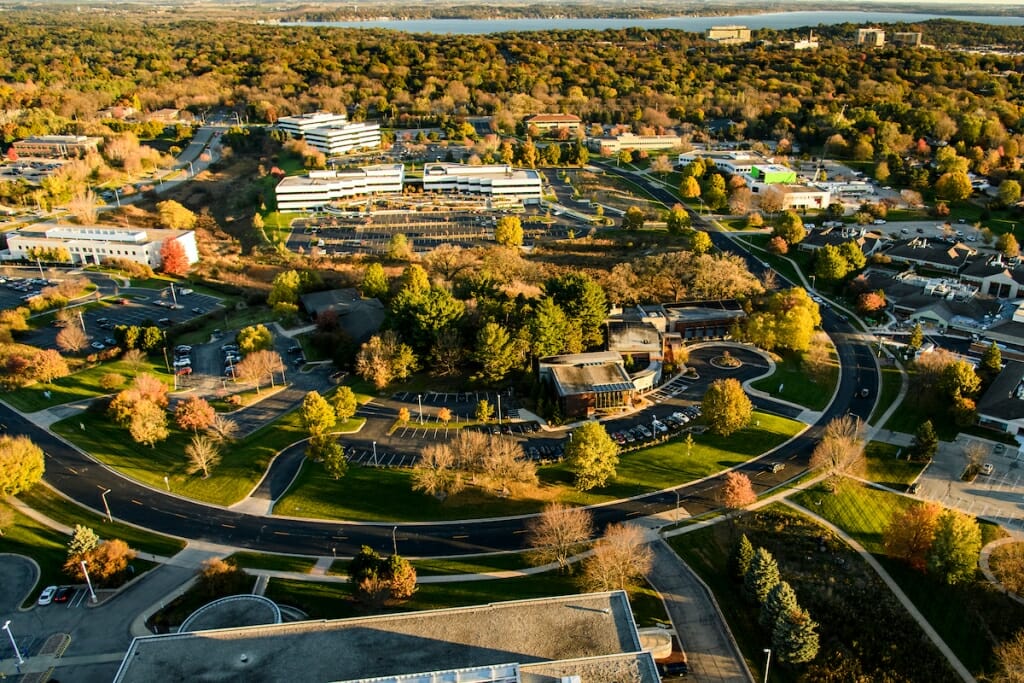 WASHINGTON D.C. – Leaders from Madison and other high-growth centers across the heartland gathered today (Jan. 29) to discuss proposals to spread high-technology growth more equitably across the nation.

The conference, Boosting growth across more of America, grew from a Dec. 9 report from the non-profit Brookings Institution that identified Madison and nine other cities beyond the coasts with track records of growth and potential for much more.

“We are here to build on success, to accelerate the growth of high-paying industries that are propelling Madison, and a select group of other cities,” said conference participant Benjamin Miller, assistant vice chancellor for government and corporate affairs at UW–Madison.  “In its report last month, Brookings placed Madison at the top of its list of growth centers that, with some more federal help, could start to rival the innovation-heavy coastal cities.”

The Brookings report highlighted what many in the Madison business community already know, Miller added: The city and its surroundings have become a hotbed of innovation and economic activity that is nearly unique beyond the coasts, with major developments in health technology, information technology, and biotechnology.

The Madison metropolitan area added more than 12,000 innovation jobs between 2005 and 2017, placing it second only to Raleigh, North Carolina, for the highest gain among the nation’s 100 largest metro areas, outside the five superstar areas: Seattle, San Francisco, Silicon Valley, San Diego and Boston.

The December report from Brookings, called a “Case for Growth Centers,” identifies research universities as “the nation’s most critical innovation infrastructure” and proposes to reduce regional inequality by supporting eight to ten metropolitan areas with federal funding to hasten their development into regional catalysts for innovation-based growth.

To some involved in technology in the Madison area, that’s already taking place. “We’ve been talking about it for a long time, and now the world is noticing that Madison, Wisconsin is a major biotech hub,” said Kevin Conroy, chairman and CEO of Exact Sciences, maker of Cologuard, a non-invasive test for colon cancer. “Exact Sciences draws strength from our proximity to UW–Madison, as well as the quality of life in our state that makes it a great place to live, work and raise a family.”

Since Exact Sciences relocated to Madison, in 2009, it has grown from a handful of employees to a global workforce of more than 3,900 people – approximately 60 percent of whom work in Dane County.

Epic Corporation, in nearby Verona, has about 10,000 employees developing and selling health record software across the country and beyond. The company’s former staffers have populated a hotbed of information technology consultancies in the area.

“Madison is affordable, especially compared to other tech hubs on the coasts,” said Seth Hain, vice president of research and development at Epic. “We feel incredibly lucky to be located near the University of Wisconsin–Madison, where there’s a strong workforce pipeline. UW graduates arrive at Epic with a solid educational foundation that allows them to make a valuable impact early on. Epic’s future is dependent on continuing to grow strong employees and UW graduates into the next generation of leaders.”

Echoing a point made in the Brookings report, Hain also noted that “the lower cost of real estate allows for Epic campus expansion and employee retention.”

The Brookings proposal aims to reduce economic inequality and improve productivity by spreading economic-technical progress beyond the five “superstar” centers. The Brookings report used five data points from 2017 and 2018 to evaluate communities of at least 500,000 away from the fast-growing coasts. Madison and surroundings were ranked first in three metrics:

Taking the five metrics into account, the 660,000-strong Madison area produced a summary “Eligibility Index” that was more than twice as high as the second-ranking location, Minnesota’s Twin Cities.

UW-Madison Chancellor Rebecca Blank championed the idea of regional U.S. growth centers built around major universities when she served as acting commerce secretary under President Obama.  She noted that the Brookings report is particularly welcome at this moment.

“Research universities like UW–Madison are driving American innovation.  They are the key to keeping this country competitive in a global economy – and that is especially true of big public universities like ours that award the vast majority of the college degrees in the U.S.,” she said.

“Maintaining the partnership between the federal government’s investment in scientific research and America’s leading research universities is crucial if we want to remain on the cutting edge of discovery and the life-changing new products of the future.”

Tom Still, head of the Wisconsin Technology Council, says the report “is a validation of what many of us who are connected to the technology sector have been saying for a long time. Madison, in particular, and other places in Wisconsin, are well positioned for growth in the next round of United States technology economy.”

The case for growth centers: How to spread tech innovation across America