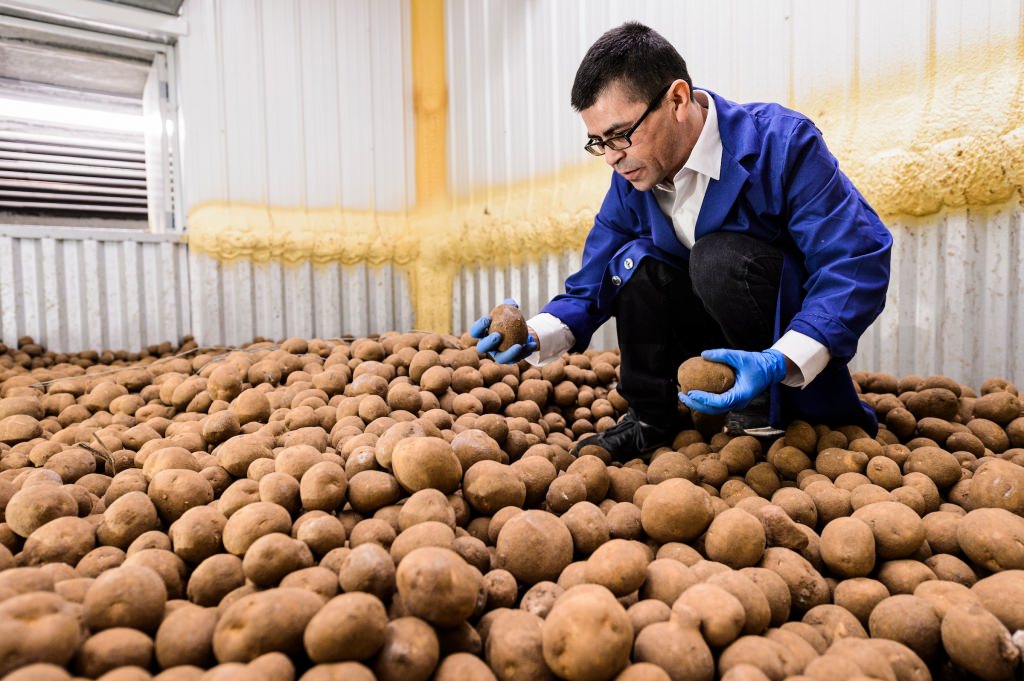 Sam Perez in a semi-commercial potato storage bin at the Hancock station that holds about 200,000 pounds of potatoes. Photo: Jeff Miller

Wisconsin has a healthy potato industry, ranking in the top 5 nationally.

It’s bolstered by support from the University of Wisconsin–Madison, ranging from supplying seed potatoes to advice on growing to research into pests.

Years before that french fry landed on your plate, the plant that would eventually give rise to the spud your fry was cut from was sealed away deep in a secure-access building, growing slowly in a test tube inside a locked growth chamber.

At least, it was if it was the product of the Wisconsin Seed Potato Certification Program, or WSPCP, a 104-year-old program run by the University of Wisconsin–Madison dedicated to supplying Wisconsin seed potato farmers with quality, disease-free tubers.

All that security helps keep these important plants clean. And clean is a big deal for potatoes. Because they are grown from the eyes of tubers, called seed potatoes, rather than from true seeds, potatoes can easily carry bacterial and viral diseases in their starchy flesh from generation to generation. The solution is exacting cleanliness and rigorous testing at every stage of potato propagation.

WSPCP supplies 70 percent of the seed potatoes for Wisconsin’s 9,000 acres of farmland dedicated to propagating seed potatoes. The program certifies 200 million pounds of seed potatoes every year, enough to plant roughly 90,000 acres for commercial growing. Those spuds are then sold to commercial potato growers in Wisconsin, other states and around the world to be turned into farm-fresh potatoes, chips and fries.

Potatoes are heaped high in the storage building at the UW–Madison Hancock Agricultural Research Station, situated in the middle of the Central Sands area of Wisconsin, one of the most productive potato-growing regions in the country. See video.

Hancock has stored these potato samples to see how well they will last in storage, and equipment operator Sam Perez keeps a close eye on the stored spuds.

By monitoring sugar levels, frying test batches of potato chips, and other techniques, Perez and other station employees help growers decide when to market their stored potatoes. Waiting longer usually means a higher price, but only if the potatoes are sound and un-sprouted.

Storage is a big concern for Paul Bethke and other UW–Madison horticulturists who breed and grow potatoes at the station.

The Hancock station, located along Interstate 39 between Stevens Point and Portage, plays a central role in Wisconsin-oriented potato research.

The Colorado potato beetle is notorious for its role in starting the pesticide industry — and for its ability to resist the insecticides developed to stop it.

To better understand this tenacious pest, a team of scientists led by University of Wisconsin–Madison entomologist Sean Schoville sequenced the beetle’s genome, probing its genes for clues to its surprising adaptability to new environments and insecticides. The new information sheds light on how this insect jumps to new plant hosts and handles toxins, and it will help researchers explore more ways to control the beetle.