Program dedicated to making a difference for minority and women entrepreneurs

UpStart, a new program designed to help aspiring minority and women entrepreneurs launch successful businesses, is being offered by the Wisconsin Alumni Research Foundation in collaboration with the University of Wisconsin–Madison Small Business Development Center and area professionals with expertise in fields such as accounting, sales and marketing. 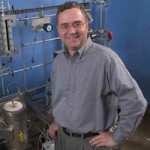 Corn may be a dietary staple for humans and animals around the world, but in Jim Dumesic's eyes, the plant "waste" left after the harvest holds even more potential as a renewable bio-based source of fuels and important chemicals. On Dec. 10, the National Academy of Inventors (NAI) named Dumesic, the Steenbock professor and Michel Boudart professor of chemical and biological engineering at the University of Wisconsin–Madison, among 143 leading innovators elected to its 2013 class of fellows. 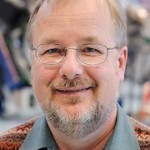 A newly-launched advocacy group is aiming to increase the number and success rate of start-up ventures stemming from University of Wisconsin–Madison ideas, building on the renewed commitment in 2013 to campus innovation. 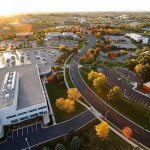 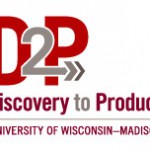 The University of Wisconsin–Madison and the Wisconsin Alumni Research Foundation (WARF) today announced the launch of a major new partnership focused on entrepreneurship on the UW–Madison campus, building on a long legacy of collaboration to move scientific innovation to the marketplace. 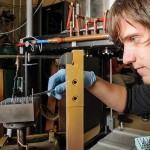 It’s a story that could become a company’s founding narrative. The two Steves built their first Apple computer in the garage. Bill Gates dropped out of Harvard to start a software company. And 4-year-old Patrick Heaney broke a plastic sword while play-fighting — and recognized that materials can always stand improvement. 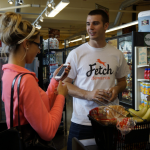 Wes Schroll was frustrated with his Target coupons. Sure, they were tailored to his purchase history, and the expiration date was far away. Yet, by the time his next trip to Target rolled around, he’d misplaced them again. A lifelong entrepreneur and Wisconsin School of Business student, he knew there had to be a better way to find deals.

The TV show “The Apprentice” comes to mind when students in Deb Pierce’s capstone journalism course describe their semester. Twenty-five seniors in the University of Wisconsin–Madison’s School of Journalism and Mass Communication had signed up to apply everything they’d learned, over four years of classes and internships, to an actual client.

As a new type of "bird flu" causes deaths and worries in China, a Madison startup is attacking the problem on two fronts. FluGen, under the scientific guidance of University of Wisconsin–Madison researcher Yoshihiro Kawaoka, a world authority on influenza, is moving ahead with a better way to deliver existing vaccines and a novel "universal" flu vaccine.

The announcement of a new source of investment capital for campus information technology entrepreneurs, or researchers aspiring to join their ranks, adds to a growing list of initiatives to speed the transfer of technologies from UW–Madison labs for the benefit of the public and advancing the pace of university innovation.

The opening line was decidedly off-hand for a performance that has run for more than three decades on Broadway and off: "Gak, this is disgusting, I can do it for $5,000!"

A new company making a high-speed, accurate and user-friendly instrument that reveals the molecular structure of proteins, drugs, and other important materials is the latest spinoff from the University of Wisconsin–Madison chemistry department.

Paul Barford, a UW–Madison professor of computer science, has a proposition, and he's got five minutes to make it.

On May 18, Rob Engelke, chief executive officer of Ultratec, Inc., will receive an honorary doctorate at a commencement ceremony at the Kohl Center on the University of Wisconsin–Madison campus. Engelke was cited for creating extraordinary advances that have enabled deaf and hard-of-hearing people worldwide to communicate via telephone.

A new company built to commercialize a green-energy discovery at University of Wisconsin–Madison earned the top honor - and a check for $100,000 - at this month's Chicago Clean Energy Challenge.

The Graduate School has established a new Office of Industrial Contracts to negotiate a growing number of research contracts with the private sector.

As scientists and engineers explore the unknown, they frequently end up building the cutting-edge equipment and instruments they need, and high-tech instrument makers that have emerged from UW–Madison labs have been a good foundation for spinoff firms that sell research tools and equipment globally while creating a wide range of jobs in Wisconsin.

With a long tradition of exploration of medicine and biology, and a research budget that has passed $1 billion, University of Wisconsin–Madison builds on a rich history of discoveries related to drugs and nutrition: Vitamin A and B were discovered here in 1914.

For a century, Wisconsin's traditional metal-working industries spawned a broad and profitable series of tool-and-diemaking firms that marketed nationwide.