Bacteria have developed an uncountable number of chemistries, lifestyles, attacks and defenses through 2.5 billion years of evolution. One of the most impressive defenses is biofilm – a community of bacteria enmeshed in a matrix that protects against single-celled predators and antibiotics – chemicals evolved by competitors through the course of evolution, including other bacteria and fungi.

Now, a University of Wisconsin–Madison professor of bacteriology has shown the first proof that a certain group of amoeba called dictyostelids can penetrate biofilms and eat the bacteria within. “This is the first demonstration that dicty are able to feed on biofilm-enmeshed bacteria,” Marcin  Filutowicz says.

In an article now online in the journal Protist, Filutowicz, first author Dean Sanders of the Wisconsin Institute for Discovery, and colleagues show time-lapse, microscopic movies proving the amoeba’s voracious appetite for five species of bacteria. In the study, the researchers pitted four types of amoeba called dictyostelium (dictys) against biofilm-forming bacteria that harm plants or humans. The target bacteria included: 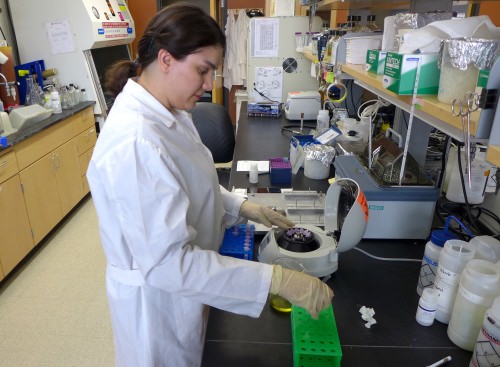 Tara Solgi, a graduate student from Iran, works with Polysphondylium amoeba in the lab of Marcin Filutowicz, a professor of bacteriology at UW–Madison. David Tenenbaum

As expected, the results depended on the strain of dicty and species of bacteria; in several cases, the dictys completely obliterated a thriving biofilm containing millions of bacteria within a day or two. The study, Filutowicz says, “contains the first movies ever to show dicty cells moving into a biofilm and devouring the bacteria.”

Beyond the visual evidence, spore germination and the subsequent union of single-celled dictys into a multi-cellular “slug” both showed successful attacks against all four species of bacteria. 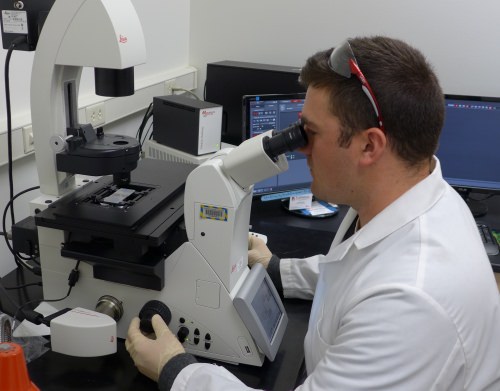 Mitchell Nitschke, a research specialist from Sussex, Wisconsin, examines amoeba on a new microscope in the Filutowicz lab. Dictys grow fast enough to be seen in real time. David Tenenbaum

Filutowicz became interested in dictys after discovering a neglected  archive of about 1,800 strains amassed by Kenneth Raper, a bacteriology colleague who started collecting the soil-borne microbes around the world in the 1930s. “Raper was the first to isolate dictys, but after he died, his life work was scattered around the department and neglected,” Filutowicz says.

Filutowicz was intrigued, but he knew very little about dictys. Then, the answer to his most fundamental question — “How do I grow them?” triggered a mental chain reaction. He found that Raper and his followers were feeding and growing dictys in the lab using bacterial prey, but nobody had apparently pursued their real-world potential as microbe hunters. “If you grow them on E coli [a common resident of the human intestine], I quickly realized, because dictys are not pathogenic, we might use them as a biological weapon against bacteria.”

Having previously started Conjugon, a company devoted to developing benign bacteria to defeat pathogenic microbes,  Filutowicz says he was “attuned to biological approaches, which were  unheard  then, and so this idea fell on a very fertile mind.”

With bacteria becoming resistant to a growing number of antibiotics, that’s welcome news, although using a living organism may add complexity to the task of getting regulatory approval.

Since 2010, Filutowicz has learned a good deal about how dicty “graze” upon bacteria, and which ones they prefer. “We looked at how these cells dismantle biofilms, trying to understand what physical, chemical and mechanical forces deconstruct the biofilms, and how the dictys move in 3-D space. These are phagocytes, and they behave much like our own immune cells,” says Filutowicz.

His collaborator, Curtis Brandt, a professor of ophthalmology and visual science  at UW–Madison, has produced promising results suggesting that the organisms are harmless to rodents, and is preparing to use dictys to fight bacterial keratitis, an eye infection, first in rodents and then in humans, in research supported by the National Institutes of Health.

“This medical application may not reach the clinic in my lifetime, but it has a lot of promise, and eventually we may be able to advance it in many other medical uses,” Filutowicz says.

In 2010, Filutowicz formed Amoebagone, to advance research into use of dictys, starting by trying to fight fire blight and other bacterial infections of fruit trees and vegetables; supported by the National Science Foundation.

Between the far-off human medical potential, and the near-term use in agriculture, Filutowicz is delightedly pulling on the thread left by Ken Raper’s beneficial microbes; licensed by the Wisconsin Alumni Research Foundation to AmoebaGone.

“To make a discovery, it needs some level of naiveté,” he says. “If you know too much, you immediately appreciate why things will not work, cannot work. Otherwise, if it was a good idea, people would have done it already. Colleagues said dictys behaved like human phagocytes, but they never mentioned harnessing them as biological controls. Every day I walk through the departmental hallway and read the inscription: “Discovery consists of seeing of what everybody has seen and thinking what nobody has thought. I was lucky enough to enter this as the foolish innocent.”