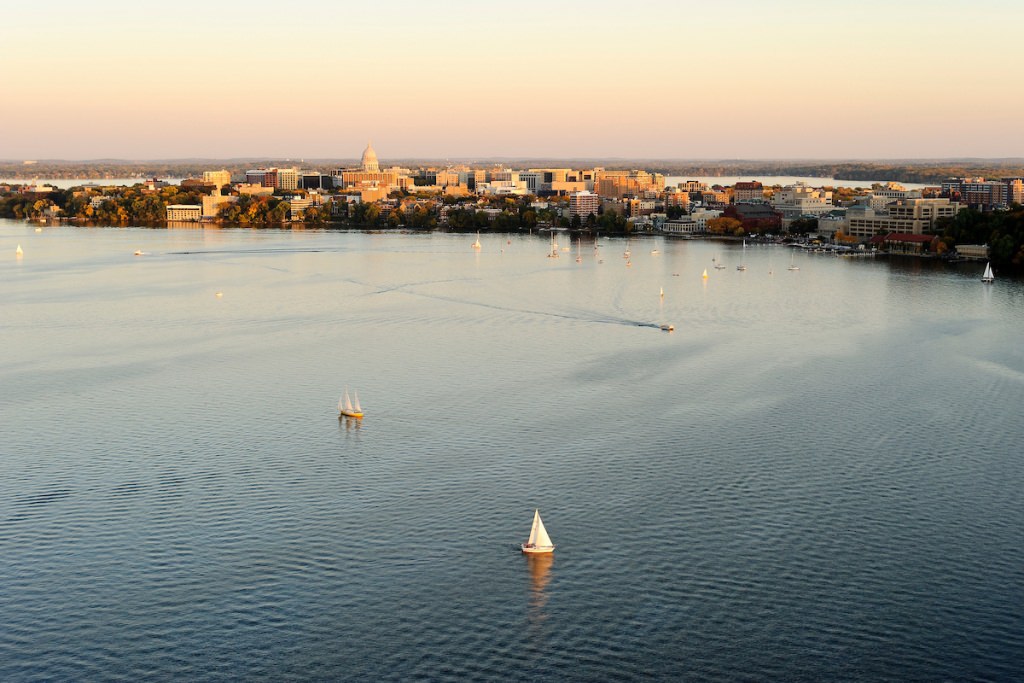 Lake Mendota and other freshwater lakes are seeing rising concentration of salt, because of runoff from road salt. Photo: Jeff Miller

Road salt is making North America’s freshwater lakes saltier, according to a new study published in the Proceedings of the National Academy of Sciences.

The study, conducted by a team of 15 researchers with the Global Lake Ecological Observatory Network (GLEON) Fellow Program – including Hilary Dugan,  a researcher at the University of Wisconsin­–Madison’s Center for Limnology – found that of the 371 lakes included in the study, many have undergone long-term salinization over the last 10-to-70 years.

“The picture is sobering,” says Dugan, who completed the work while a postdoctoral researcher at the Cary Institute of Ecosystem Studies. “For lakes, small amounts of shoreline development translate into big salinization risks.”

Since the 1940s, road salt has been used to keep winter roads navigable by melting away snow and ice. Today, some 23 million metric tons of sodium-chloride-based deicer is applied to North America’s roads each year. Much of this road salt washes into nearby water bodies, where it is recognized as a major source of chloride pollution to groundwater, streams, rivers, and lakes. Its use has increased over time. 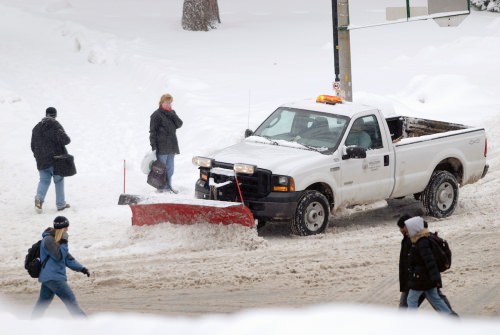 A Physical Plant truck plows snow and salts a slippery pedestrian walkway along Linden Drive in 2007. Such salt is raising the salt levels of freshwater lakes.

The team compiled long-term data and compared chloride concentrations in North American lakes and reservoirs to climate and land use patterns. Dugan says the goal of the National Science Foundation-funded study was to reveal whether salinization is changing across broad geographic scales, and to identify how and why.

To gauge road salt exposure, the researchers assessed road density and land cover within a 100-to-1500 meter buffer around each of the 371 study lakes. Roadways and impervious surfaces such as parking lots and sidewalks are reliable proxies for road salt application because as developed areas, they are susceptible to high levels of salting and runoff.

The researchers found that roads and other impervious surfaces within 500 meters of a lake’s shoreline were strong predictors of elevated chloride concentrations. In the North American Lakes Region, 94 of 134 lakes with more than 1 percent impervious land cover in their 500-meter buffer zone had increasing chloride trends. By extrapolation, some 7,770 lakes in the North American Lakes Region may be at risk of rising salinity, the team concluded.

For instance, Dugan says that in Madison, Wisconsin “we’ve seen a tremendous increase in the chloride concentrations for our local lakes. Background levels in the Madison lakes were around 2 mg/L in the early 1900s, and now they’re at 50 mg/L in Lake Mendota. We’re also seeing incredibly high concentrations in streams, ponds, and even groundwater.”

If current salinization trends continue, many North American lakes will surpass Environmental Protection Agency (EPA)-recommended chloride levels in 50 years. According to the study, 14 North American Lakes Region lakes are expected to exceed the EPA’s aquatic life criterion concentration of 230 mg/L by 2050, and 47 are on track to reach chloride concentrations of 100 mg/L over the same time interval.

In lakes, elevated chloride levels have been shown to alter the composition of fish, invertebrates and the plankton that form the base of the aquatic food web. Aquatic species richness and abundance can decline, and in extreme cases salinization can prevent lakes from mixing – causing low oxygen conditions that smother aquatic life and reduce water quality.

“In the North American Lakes Region – where road salt is a reality – roads and other impervious surfaces within 500 meters of a lake’s shoreline are a recipe for salinization,” says study co-author and fellowship advisor Kathleen Weathers, an ecosystem scientist at the Cary Institute of Ecosystem Studies and co-chair of GLEON. “We need to manage and monitor lakes to ensure they are kept ‘fresh’ and protect the myriad of services they provide, from fisheries and recreation to drinking water supplies.”

While many states and municipalities acknowledge the importance of shoreline management, the study authors note that zoning regulations are often only enforced within 300 meters and many lakes lack the monitoring programs needed to adequately track lake health. Shoreline management should extend well beyond a lake’s perimeter.

“These results are likely an underestimation of the salinization problem, as a number of regions with heavy road salt application, such as Quebec or the Maritime Provinces of Canada, had no long-term lake data available,” says study co-author Sarah Bartlett, a graduate student at the University of Wisconsin-Milwaukee.

In Wisconsin, Dugan says, state and local agencies are aware of the environmental threats of road salt on lakes and have been instrumental in implementing policy changes.

“There’s a great website called Wisconsin Salt Wise, which provides a wealth of resources available to understand the issues locally,” says Dugan. “Most municipalities are on board with reducing salt application, because it saves them money, but obviously, this has to be balanced with public safety.”

However, citizens can also play a direct part in reducing the amount of road salt making its way into Wisconsin’s lakes, Dugan says. “What I don’t think people realize is that a large quantity of road salt – in some areas more than 50 percent – is applied by private citizens and businesses, to sidewalks and parking lots, and there has to be an effort to reduce this load as well.”