Mercury levels in fish fluctuate along with water levels in lakes 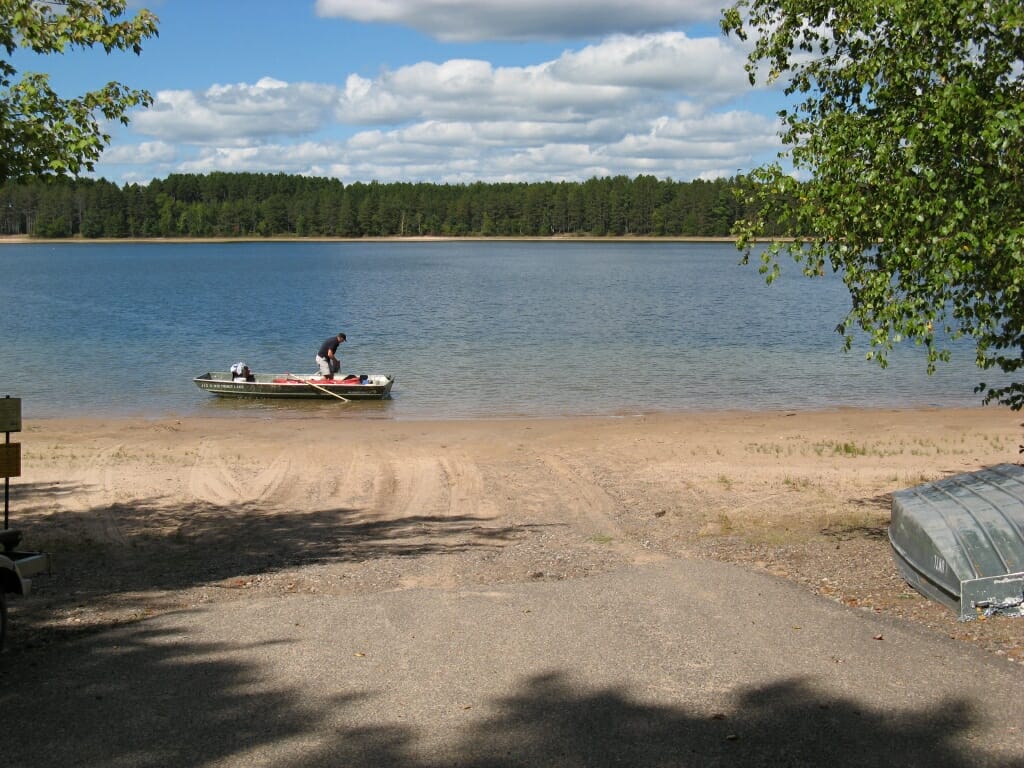 More land is exposed during a period of low water at Crystal Lake in central Wisconsin. Tim Meinke

The phenomenon was discovered by a team of scientists from the University of Wisconsin–Madison and Wisconsin Department of Natural Resources as they examined long-term data from several lakes in northern Wisconsin. In previous work, the researchers had found that, roughly once a decade, water levels in the northwestern Great Lakes and northern Wisconsin’s inland lakes fluctuate between high and low levels and back again. 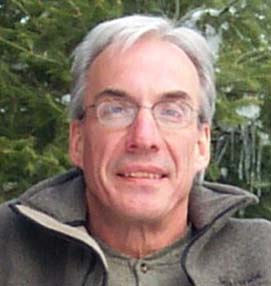 But water levels were only one of many characteristics the researchers had collected data on, “so we started wondering, well, what about other things?” says Carl Watras, lead author of the report, which was published Dec. 19 in the Canadian Journal of Fisheries and Aquatic Sciences.

So the scientists turned to 32 years of data on mercury levels in more than 1,300 walleye, a fish popular with anglers and restaurants throughout the Great Lakes region. And when the researchers plotted out that data, they saw a familiar pattern — mercury levels in walleye follow the 10-year water level fluctuations.

“It was a complete surprise,” says Watras, a research scientist at the DNR and Trout Lake Station, part of UW–Madison’s Center for Limnology. 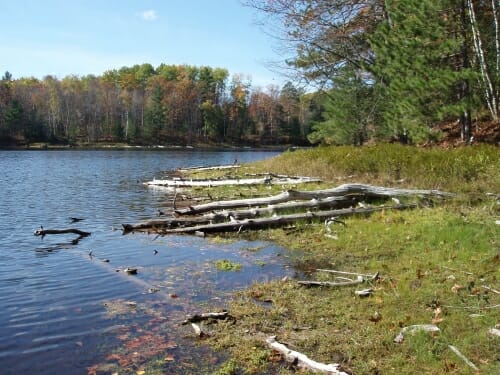 During drought years, the dry shores of Little Rock Lake in northern Wisconsin are taken over by young plants. Jerome Gaeta

Mercury pollution in America’s waterways comes mainly from coal-fired power plant emissions and other activities that burn fossil fuels. That atmospheric mercury falls into aquatic ecosystems during rain storms, and it accumulates in the sediment.

When water levels in a lake drop, plants colonize the newly dry land, absorbing mercury into their tissues. When the water levels go back up, Watras says, “all of this vegetation is now underwater and it begins to decompose.”

During this decomposition, bacteria take in mercury and convert it to a highly toxic form called methyl-mercury. When that happens, Watras says, “it just whips right up the food chain into fish.”

Methyl-mercury is absorbed by plankton, which are then eaten by aquatic insects and smaller fish, which are then eaten by bigger fish. Fish retain methyl-mercury in their flesh for a long time, posing a health hazard to people who eat them. The World Health Organization considers mercury a major public health concern, and boat landings and fishing piers throughout the U.S. warn anglers about the dangers of eating mercury-contaminated fish. 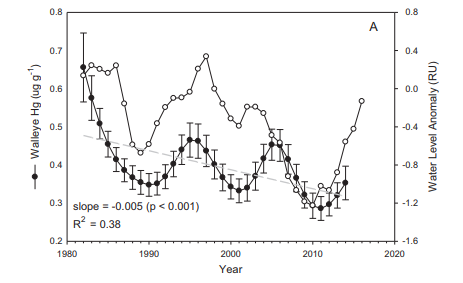 : This graph shows lake water levels and mercury levels in fish fluctuating in sync with one another through the decades. Image courtesy of Carl Watras

Watras says the study underscores the need for long-term research.

Since federal Clean Air Act amendments were adopted in 1990, mercury emissions have been declining, which has decreased the amount of mercury entering aquatic ecosystems. But, depending on when you look at data like mercury levels in fish, you might not see that trend.

If researchers test mercury levels in adult walleye caught during low-water years, they would find that emissions controls had worked and mercury levels were dropping.

On the other hand, if scientists look at data from lakes between their low-water and high-water phases, “you could argue that emission controls have done nothing at all,” says Watras.

“But they have. It’s just that you have to look at the long-term pattern. Mercury levels in fish have been slowly trending down, but you only see that in these multi-decadal time series, because it bounces around with water levels,” he says.

The same is true for other environmental factors Watras and his colleagues have been studying. Acid rain, for example, has largely been eliminated as a threat to lakes in the U.S. But acidity in lakes fluctuates, much like mercury, when water levels rise and fall, meaning that only when researchers take the long view do they start to see the full story.

“A decade is considered long by most people,” Watras says. “But it’s not long enough to see what’s really going on in nature.”