Forget ‘needle in a haystack.’ Try finding an invasive species in a lake.

Spiny water fleas are a type of zooplankton that travel in swarms and are pushed around by wind and currents. They are present in the greatest numbers in Lake Mendota in the fall. Jake Walsh

When the tiny and invasive spiny water flea began appearing in University of Wisconsin–Madison researchers’ nets in 2009, scientists began to wonder how Lake Mendota, one of the most-studied lakes in the world, went from flea-free to infested seemingly overnight. Subsequent studies found the invader had persisted for years at low population densities that went undetected even as the lake was routinely sampled by trained technicians.

Now a new report published in the journal Ecosphere says Lake Mendota’s story may be the rule, rather than an exception.

“Our original idea was (to ask): ‘How is this possible? In what scenario would we miss spiny water flea for 10 years, even after so much effort?’” says Jake Walsh, lead author of the study and a postdoctoral researcher at the UW–Madison Center for Limnology.

The answer is that completely missing a species “is not only possible, it’s likely,” says Walsh, noting that the study can help inform invasive species ecology and is a “way of using math and computer modeling to fill in the blanks of what we see.”

Scientists wondered how Lake Mendota, one of the most-studied lakes in the world, went from flea-free to infested seemingly overnight.

With Center for Limnology director Jake Vander Zanden and Eric Pedersen, a colleague from Fisheries and Oceans Canada, Walsh developed a theory of the probability of detecting a species as its population densities change.

Their modeling shows that when species are in low abundance in a given habitat, the ability for scientists to detect them drops off precipitously.

This may explain why spiny water fleas passed undetected in Lake Mendota for a decade. Early on, researchers would have needed to dip their nets into the lake “hundreds or even thousands” of times, Walsh says. Once the invaders became more abundant, detection became much easier: “You can go out sampling three times and likely detect spiny water fleas.” 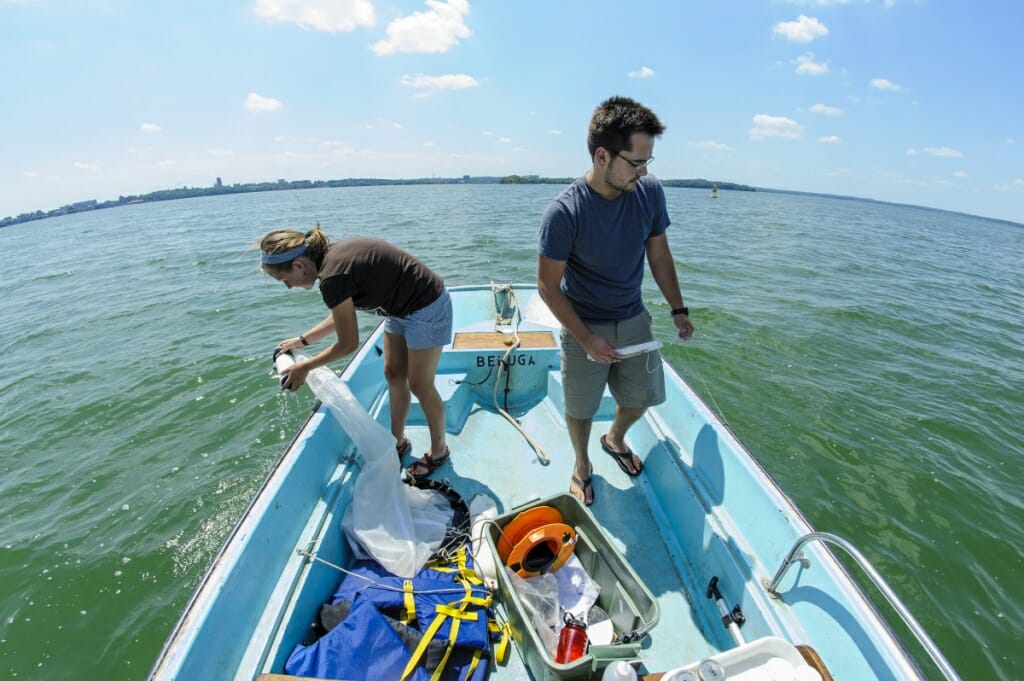 Jake Walsh (right), a researcher for the Center for Limnology, and undergraduate Carly Broshat use plankton nets to collect water samples from Lake Mendota in July 2012. Photo: Bryce Richter

Part of the problem is size. Even if there were one spiny water flea for every cubic meter of water in Lake Mendota, catching one in a net would be like finding a sesame seed in roughly 250 gallons of water.

One of the solutions, the study shows, may be for scientists to increase the size of the funnel-shaped plankton nets they drag through the water when looking for the small creature. Standard nets are roughly a foot in diameter, but by upgrading to a one-meter-wide net (about three feet in diameter), “your detection increases by quite a bit,” Walsh says.

Catching one spiny water flea in a net would be like finding a sesame seed in roughly 250 gallons of water.

Being more deliberate about sampling for spiny water fleas and other invasives at the right places and times may also improve scientists’ chance for detection, Walsh says. Spiny water fleas are a type of zooplankton (small, free-floating crustaceans) that travel in groups called swarms and are pushed around by wind and currents. A swarm may move at any time out of any given sampling site. And their abundances vary throughout the year.  For instance, spiny water fleas are present in the greatest numbers in Lake Mendota in the fall.

The study offers some “basic rules of thumb” for designing species surveillance programs of any kind — from likely invasives to rare or endangered natives, Walsh says.

“It has to do with targeting our efforts better and finding times of the year where things are more abundant or areas where they’re more abundant because that dramatically increases your detection rate,” he says. “If you take a little extra time to get to know the species you’re looking for, it can really pay off.”