A wildly out-of-place protein leads to haywire cells in a particularly troublesome type of rare early childhood cancer, according to University of Wisconsin–Madison researchers.

Found in the base of the brain, posterior fossa type A ependymomas tumors are difficult to remove via surgery and prove fatal in more than a quarter of children within five years of diagnosis. A study published this week in the journal Molecular Cell describing the role in the brain tumor cells of a wayward protein called EZHIP, which belongs in ovaries and testes, may suggest a target for new treatments. 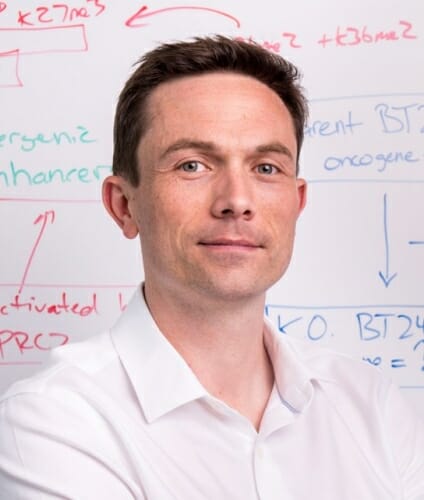 Peter Lewis, a UW–Madison professor of biomolecular chemistry who led the research, studies chromatin dynamics: the protein molecules and processes that pack and unpack six feet of genomic DNA in the nucleus of every human cell. In recent years, his research group and collaborators have shown that specific mutations changing one group of packaging proteins called histones — the molecular spools around which DNA winds in the nucleus— can change the way a cell’s genes are expressed to make the cell cancerous.

“These mutant histones found in human cancers — we call them oncohistones— make up a tiny proportion of the total histone content of tumor cells,” Lewis says. “But these oncohistones really punch above their weight because of how they work.”

“Many parts of the genome remain tightly compacted throughout most of the lifetime of an animal,” Lewis says. “They might only become de-compacted, to allow DNA in that part of the genome to be used by the cell’s machinery, during a very transient window of development in one specific cell type. This helps regulate genomic DNA access. And that, in turn, affects gene expression. And that, in turn, establishes and maintains cell identity.”

A mutated histone, however, may reveal or conceal genes at inappropriate times.

“When things go awry — for example, a specific mutation in histone proteins or mutations to the machinery that compact and de-compact the chromatin— this can have dire consequences for the cell,” Lewis says.

In the case of a lethal brainstem tumor called diffuse intrinsic pontine glioma, or DIPG, Lewis and others discovered in 2013 that an oncohistone called K27M inhibits the activity of an enzyme called PRC2. Disruptions to PRC2, which itself helps control the appropriate expression of genes, can cause cells to turn cancerous.

That shouldn’t happen. EZHIP is a protein that’s normally turned on only in cells of the ovaries and testes — nowhere near brain tumors.

“It’s not supposed to be present in the brain, and we don’t understand how it’s turned on,” Lewis says. “But we now know what it does when it is present. We found that it acts just like the K27M oncohistones. It inhibits the same PRC2 complex.”

When PRC2 is active, it is both reading chemical modifications from histones and writing new ones to histones to promote proper chromatin compaction and cell function.

“EZHIP and K27M cause writer’s block (in PRC2),” Lewis says. “And it’s not just any PRC2 which is inhibited, it’s a specific activated form — a super writer — that’s blocked.”

Zeroing in on PRC2 and its effects may present new ways to treat these cancers.

“Because we understand how a form of PRC2 is inhibited by these tumor-driver proteins, we can now develop a screen for small molecules that target this specific form of the enzyme,” Lewis says. “EZHIP’s very specific normal location in the gonads and K27M’s presence only in tumor cells also make them potential candidates for anti-tumor vaccines.”

In a second study, published this week in the Proceedings of the National Academy of Sciences, the same group of researchers discovered that PRC2 activity is affected by a different oncohistone called G34 in 92 percent of giant-cell tumors of the bone, another pediatric tumor. In these tumors, the researchers found that G34 oncohistones allow PRC2 to be overactive in parts of the genome where it shouldn’t normally function.

“These specific bone tumors are generally less deadly than DIPG, but understanding the relevance of PRC2 in their tumorigenesis presents an opportunity to explore alternative therapies,” says Lewis.