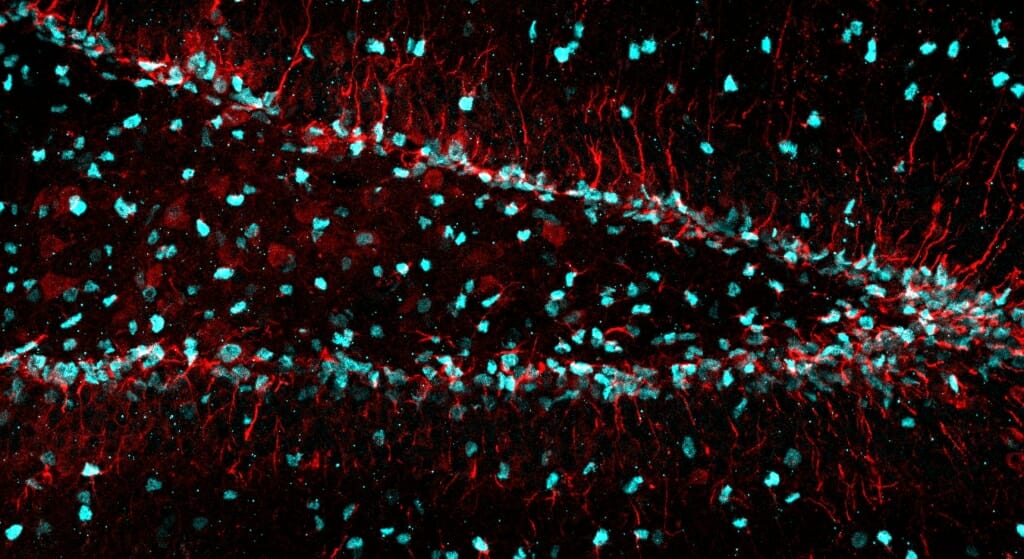 An immunofluorescence image of a region of the brain called the dentate gyrus within the hippocampus which is one of two places that neural stem cells reside in a rodent brain. In this image you can see many neural stem cells in the brain labeled by vimentin in red and Sox2, a marker for cells that are self-renewing, in cyan. Image by Christopher Morrow

The work provides a new cellular target for interventions that could boost neuron production when it’s needed most, such as after brain injuries. And because clumping proteins are a hallmark of many neurodegenerative diseases, like Alzheimer’s, the new study could provide insight into how these toxic proteins can be cleared away.

Assistant Professor of Neuroscience Darcie Moore led the work with her graduate student Christopher Morrow. Their study is available online in the journal Cell Stem Cell.

“As a long-term goal, we would love to be able to induce endogenous neural stem cells to help regenerate the tissue, especially after a stroke or some type of neurodegeneration,” says Morrow. 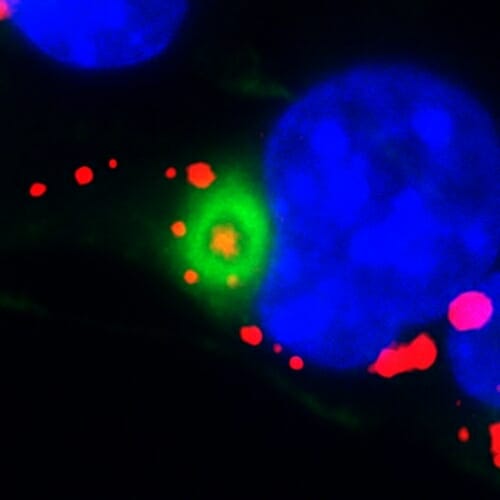 An immunofluorescence image of a neural stem cell in a dish that was chemically stressed to induce the formation of aggresomes, where damaged proteins accumulate for destruction. Vimentin (green) cages aggregated proteins (red) next to the nucleus (blue). Image by Christopher Morrow

In a mouse model, the team identified a cellular filament known as vimentin as a key component of neural stem cells’ protein-management system. They found that vimentin brings proteasomes — molecular garbage disposals that can digest targeted proteins — to clumps of damaged proteins that must be removed for cells to function properly. Neural stem cells accumulate damaged proteins during the aging process, or when they are dormant or exposed to toxic chemicals.

When neural stem cells lacked vimentin, they were worse at clearing away targeted proteins, came out of dormancy more slowly and were less able to recover from being exposed to protein-damaging toxins. Mice unable to produce vimentin had a reduced ability to produce new neurons from stem cells at a younger age, suggesting that vimentin is important for keeping neural stem cells spry and productive during aging.

That program involves tagging damaged proteins, concentrating them in one spot in the cell, and then transporting digesters to that spot to break down the damaged proteins. To study what role vimentin plays in this program, he tagged the filament protein with a fluorescent marker and also studied mice unable to produce vimentin.

He saw that while neural stem cells could still tag and concentrate damaged proteins without vimentin, they needed this filament protein to bring proteasomes to the right place to clear all the old proteins away. With a reduced ability to dispose of accumulated proteins, neural stem cells were worse at coming out of dormancy and producing new neurons in mice.

It’s a surprising revival for the role of vimentin, which scientists long assumed to be largely limited to helping cells move around and providing structural support for the cell. Twenty years ago, researchers developed mice unable to make vimentin — and they seemed fine. But now it’s becoming clear that vimentin is important for responding to challenging situations, such as aging or toxins, that threaten to gum up cells with clumped proteins.

Mutations in vimentin have been linked to diseases in humans, including cataracts and, in some cases, accelerated aging. And cancer cells rely on vimentin when they start metastasizing. More research is required to determine how vimentin affects cellular health, aging and disease in humans and other animals.

“In addition to focusing on neural stem cells as a path toward regenerative therapies, an obvious next step is to investigate how vimentin plays in a role in other diseases like cancer,” says Moore. “This study gives us a lot to follow up on.”

This work was supported in part by the National Institutes of Health (grants T32GM008688 and T32AG000213) and a DP2 NIH New Innovator Award.