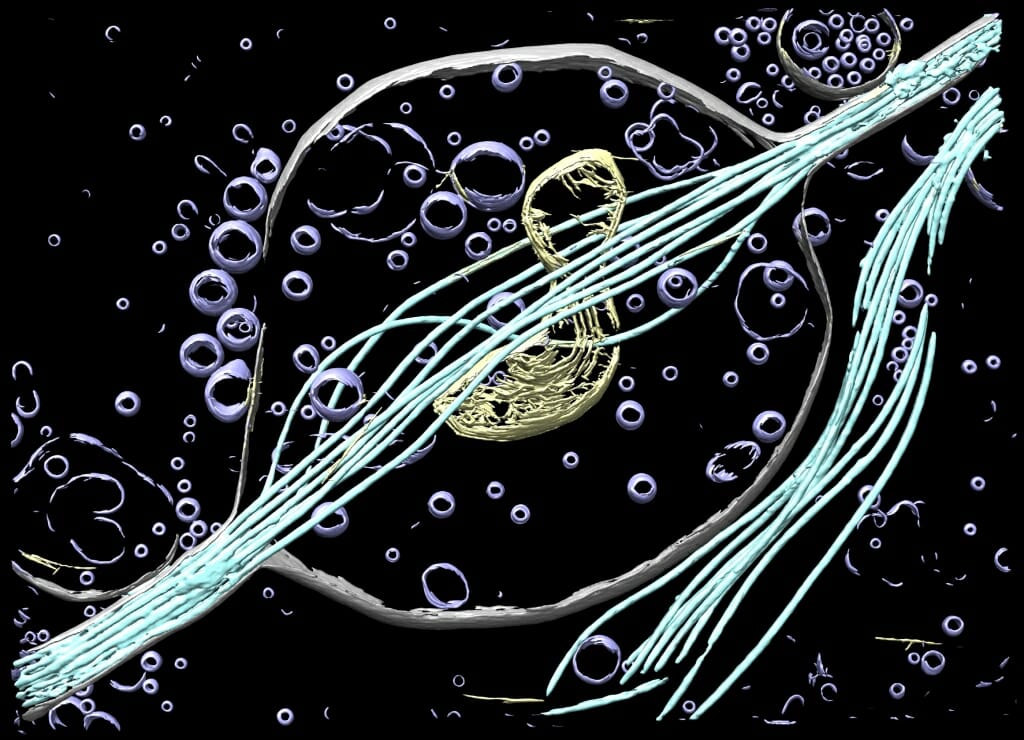 This three-dimensional view made by UW–Madison’s Joseph Kim and Tanner Tenpas with cryo-electron tomography shows microtubules (in cyan) and mitochondria (yellow) — essential cellular components — of an individual neuron from the cortex of a mouse brain.

MADISON — A national research initiative announced today will place the University of Wisconsin–Madison at the forefront of a revolution in imaging fostered by cryo-electron microscopy and cryo-electron tomography — technologies that can illuminate life at the atomic scale.

The National Institutes of Health will provide $22.7 million over six years to create a national research and training hub at UW–Madison that will give scientists across the country access to this game-changing technology. 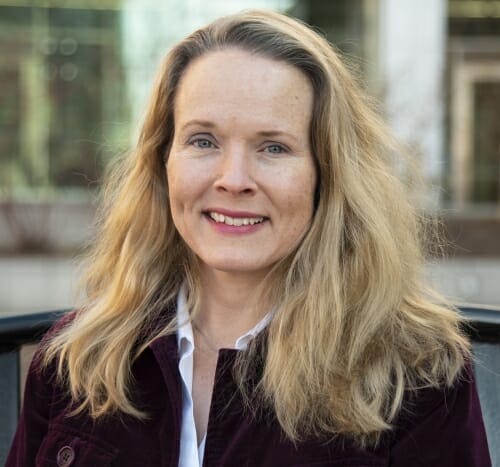 Cryo-electron microscopy (cryo-EM for short) is a method used to make images of biological molecules that are flash-frozen to capture them in their native state. No dyes or other alterations are needed to view the structures, which gives scientists a highly accurate picture of true biological function. Scientists can peer into the very surfaces where drugs and proteins interact, where diseases occur, and where viruses orchestrate their attacks. Cryo-EM has the potential to impact every corner of medicine, from Alzheimer’s disease to vaccine development, protein and cellular engineering and many other areas across all aspects of life sciences research.

One important specialization and focus of the national center, cryo-electron tomography (cryo-ET), dramatically extends the atomic scale illumination of cryo-EM by making images of the precise three-dimensional molecular locations where diseases and potential therapies interact with cells. This combination provides an unprecedented level of detail about the structure of living organisms.

“One of the most exciting parts of the project will be bringing new investigators into the cryo-ET field,” says lead investigator Elizabeth Wright, a UW–Madison professor of biochemistry and affiliate with the Morgridge Institute for Research. “This will help everyone in biological science research because discoveries made here will have the potential to be translated into new therapeutics and drug targets that benefit humanity.”

One major aim of the NIH initiative is to bring more scientists into the game. Cryo-EM and cryo-ET are still young technologies with a limited workforce and very low access to the necessary equipment and expertise. The creation of four new centers — others will be at Stanford University, the University of Colorado-Boulder, and the New York Structural Biology Center — are meant to provide access to advanced instrumentation for cryo-ET, train a new workforce, and continually improve the technology while also providing new research discoveries.

The UW–Madison center will serve as a central hub for the national initiative, helping direct participating scientists to the right cryo-ET network resource.

“The goal is to help people become independent practitioners of the routines such as cryo-ET specimen preparation, data collection, and image analysis,” Wright says. “Whenever appropriate, the UW–Madison center will support researchers as they solve interesting and technically challenging problems.”

UW–Madison became a cryo-EM leader thanks to a decade-long investment beginning around 2010. The Department of Biochemistry in the College of Agricultural and Life Sciences took the lead and the Morgridge Institute joined with significant financial and organizational support. The investment attracted partnerships with the Office of the Vice Chancellor for Research and Graduate Education, the School of Medicine and Public Health and several other campus units. The fruits of this partnership will debut later this year with the grand opening of the UW–Madison Cryo-EM Research Center in the Biochemical Sciences and Deluca Biochemistry Buildings.

While the campus has already installed four high-powered cryo-EM instruments, the NIH initiative will pave the way for at least three more microscopes to accommodate the national demand. Installation is expected to be complete by early 2022. The grant also provides funding for training, computation and personnel.

Recognizing the importance of cryo-EM to the future of structural biology, the Biochemistry Department and Morgridge Institute have already begun to assemble a team of investigators to advance the science. In addition to Wright, the Department of Biochemistry and CALS hired professors Robert Kirchdoerfer, who has expertise in cryo-EM applications in virology, and Ci Ji Lim, who has expertise in cryo-EM applications in DNA biology. The Morgridge Institute hired investigator Tim Grant (also a UW–Madison professor of biochemistry), who develops computer programs to improve cryo-EM and cryo-ET data collection and analysis, and investigator Brian Bockelman, who is an expert in research computation.

Wright’s research experience in cryo-ET and cryo-EM was critical to securing the NIH hub. Prior to joining UW–Madison in 2018, Wright oversaw the development of an entire cryo-EM program at Emory University in Atlanta. She was intrigued with the same ground-up project development taking place in Madison, with added advantages of being associated with a powerhouse research university.

“There’s no way we could have built a facility like this without Prof. Wright’s vision, leadership, and scientific expertise,” says Biochemistry Chair Brian Fox. “This initiative will push the understanding at a scientific level and has great potential for basic discoveries leading to translation from the lab to the clinic and transformative applications in many other important areas.”

“UW–Madison has a long history of developing and perfecting imaging technologies that help biologists see, and therefore better understand, life,” says Kate VandenBosch, CALS dean. “I am proud of our researchers’ applications of these tools, as well as their efforts to make them available to the research community. Great discoveries will result.”

Spinoffs have already emerged from cryo-ET. A colleague of Wright at Emory developed a vaccine for respiratory syncytial virus — a highly contagious infection that afflicts infants and young children — based on cryo-ET structures that has now advanced into a commercial venture. Investigators expect similar results here as new compounds, vaccines and drug targets are identified.

The Morgridge Institute, a private nonprofit research institute affiliated with UW–Madison, served as an important early catalyst in bringing cryo-EM tools and talent to Madison. Morgridge virology investigator Paul Ahlquist led the effort by bringing Morgridge, Biochemistry, OVCRGE and SMPH together to put UW–Madison on the map as a cryo-EM leader.

“As a basic research nonprofit, we have the ability to act quickly and make these kinds of strategic partnerships and investments in new frontiers of science,” says Morgridge CEO Brad Schwartz.

Steven Ackerman, UW–Madison vice chancellor for research and graduate education, says the new cryo-ET hub will contribute to a great tradition of shared research facilities at UW–Madison, which is eighth in the nation for total volume of research conducted.

“The national status of this new center will serve as a powerful magnet for attracting top scientific talent to Wisconsin,” Ackerman says.

The OVCRGE has provided key contributions from the annual Wisconsin Alumni Research Foundation gift to purchase instruments and provide start-up packages for new faculty, and its UW2020 program to hire new staff contributing to the advances in cryo-EM and cryo-ET on campus.