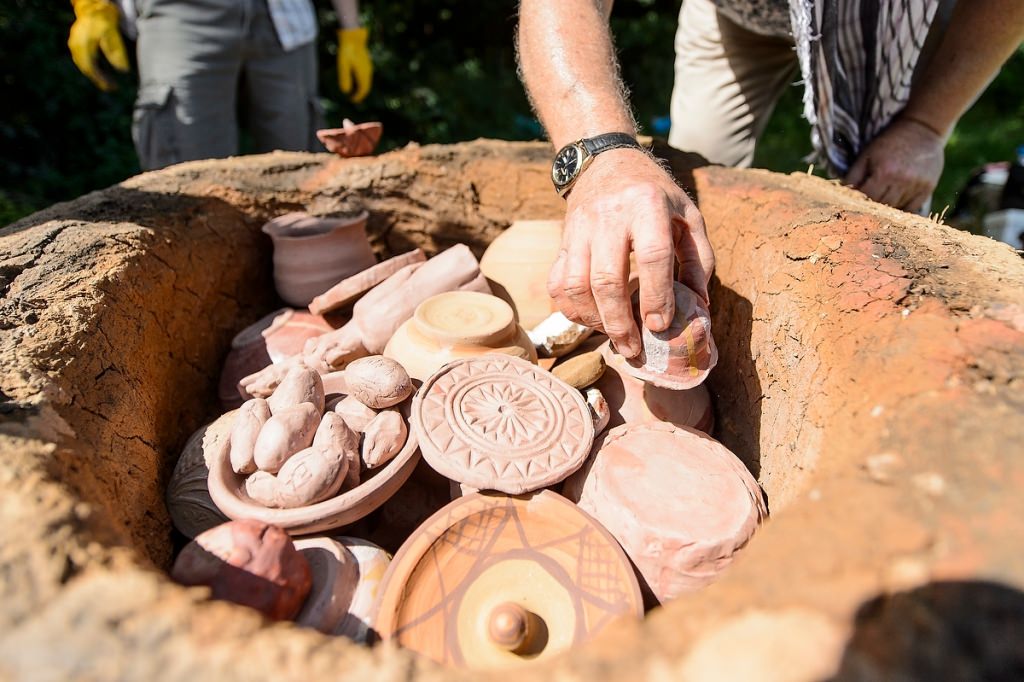 Students in anthropology professor Mark Kenoyer’s Anthro 352: Ancient Technology and Invention course participate in a class exercise which includes creating pottery and firing it in a class-built kiln near the Eagle Heights Community Gardens at UW–Madison. Photo: Bryce Richter

Mark Kenoyer knows from the pleasing “ting” of a piece of pottery, when struck by a single finger, just how hot the kiln that fired it must have been.

He can also tell by the scent cast by an actively firing kiln whether it has reached the proper temperature for vitrification — the process of slow heating and rapid cooling that seals the pores in the clay and makes the pottery impervious to water.

“It has a crispy smell, different from just wood burning,” says the University of Wisconsin–Madison archaeology professor.

Kenoyer’s skill is due in large part to his experience practicing with the age-old technologies of the ancient cultures he has studied for decades. It is experience he has sought to bestow on students enrolled in the ancient technology and invention classes he has taught each summer since 1988.

“We learn how to look at and interpret cultural materials properly,” says Kenoyer. “Otherwise, we are studying whole cultures with no clue how people made things. Students need to learn to differentiate between a cooking fire and one from a kiln.” 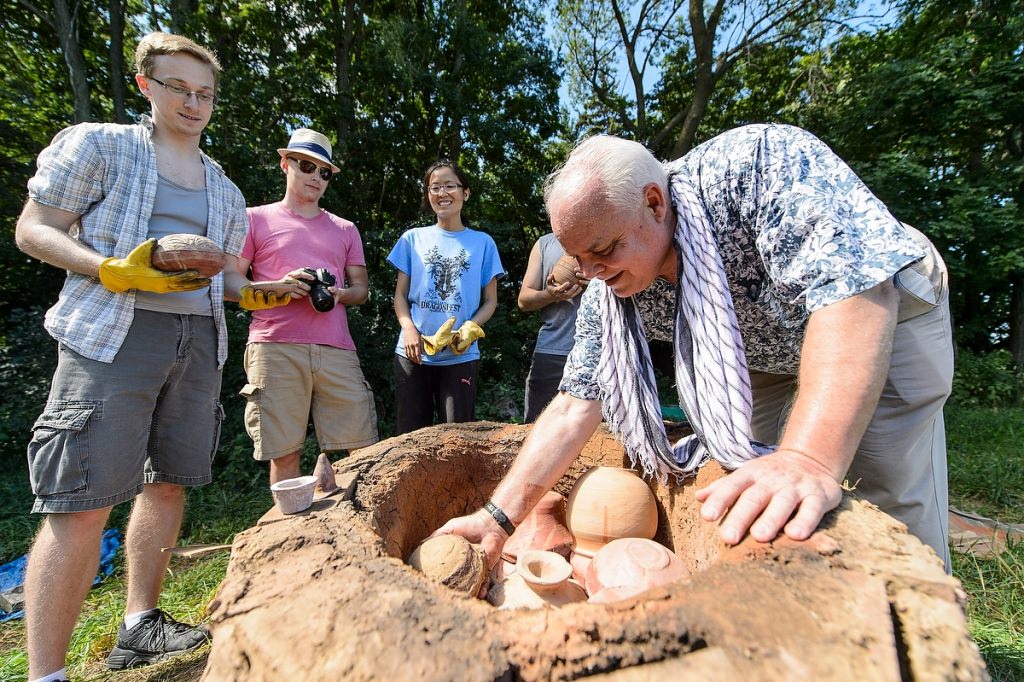 This is precisely why the undergraduate and graduate students in his small course were working recently under a beating hot sun at the outdoor UW–Madison Experimental Archaeology Lab near Picnic Point.

The students had produced pottery using a variety of historic techniques and were preparing to fire it in a kiln Kenoyer built at the outdoor lab nearly 15 years ago. They were to load the kiln using traditional methods, seal it with clay produced on site and attempt to produce a fire without modern technology.

Alina Boyden, a graduate student who studies prehistoric projectiles in Stone Age Africa, volunteered to climb barefoot into a pit dug several feet into the ground and add water to the loess soil dug out from the pit walls. Using her feet, toes and a substantial amount of lower leg strength, Boyden mixed the water and soil into a thick, slurping clay.

“It’s the traditional way people do it all over the world,” said Jamie Lanning, the course teaching assistant and a graduate student studying ceramic shipping vessels with Kenoyer.

Meanwhile, the other students — Ai Wanqiao, a graduate student visiting from China; Mikayla Fehring, a senior majoring in anthropology and art history; Dan Quigley, a senior in physics earning an archaeology certificate; and Alan Lee, a first-year graduate student in archaeology — prepared the barrel vault kiln (so called because of its design). They cleared the flues and cleaned the kiln’s entrance. 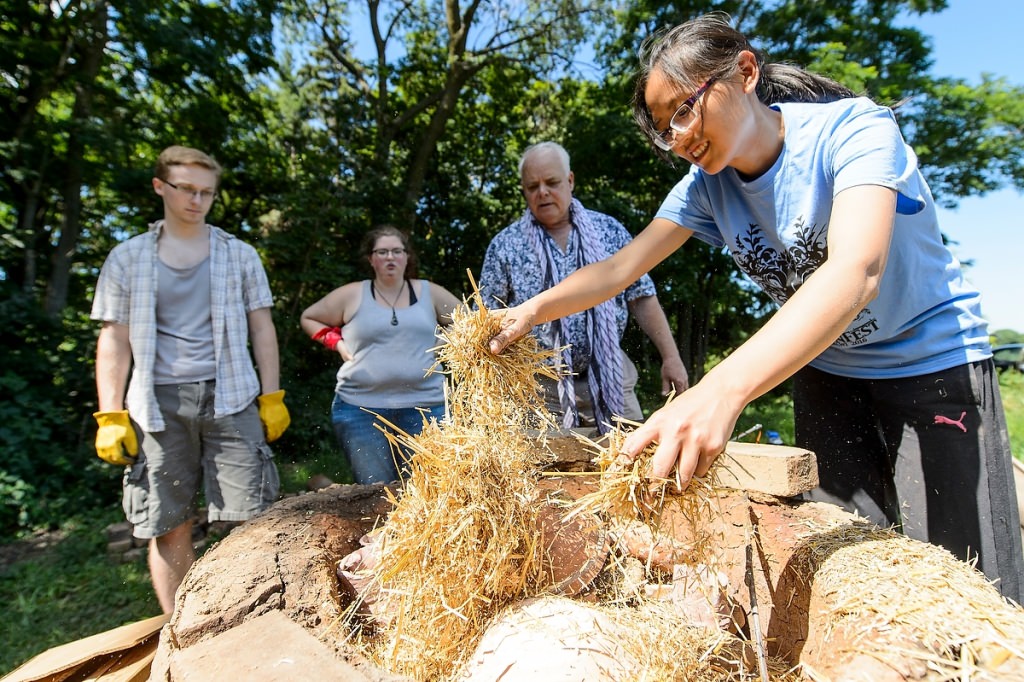 Graduate exchange student Ai Wanqiao (right), spreads straw over the top of pottery to protect it from mud that will be placed around it as the kiln is completed. Photo: Bryce Richter

Using old pottery, they lined the bottom of the kiln to protect the new pottery from coming into direct contact with the fire and help the heat distribute evenly.

The students, with Kenoyer’s supervision, then placed the new pottery one-by-one, carefully and systematically, into the kiln. Kenoyer reminded them to protect fragile pieces by placing them in the stable center and position large vessels in ways that would not crush the more delicate bowls.

“The hardest part is stacking the kiln,” said Kenoyer. “If you block the air, the fire gets smothered. Or the pots might fall when firing.”

The students covered the kiln and plastered it with Boyden’s fresh, wet clay, sealing holes that might otherwise let out heat. They mixed the clay with straw to prevent it from cracking.

Meanwhile, Kenoyer pointed out bits of old, broken pottery lying in a tuft of grass. He leaves these kinds of “artifacts” around the site, where they disperse, become covered by soil and grass, and begin the long process of decomposing.

“It allows the students to see how material culture accumulates and then we can interpret it,” Kenoyer said. 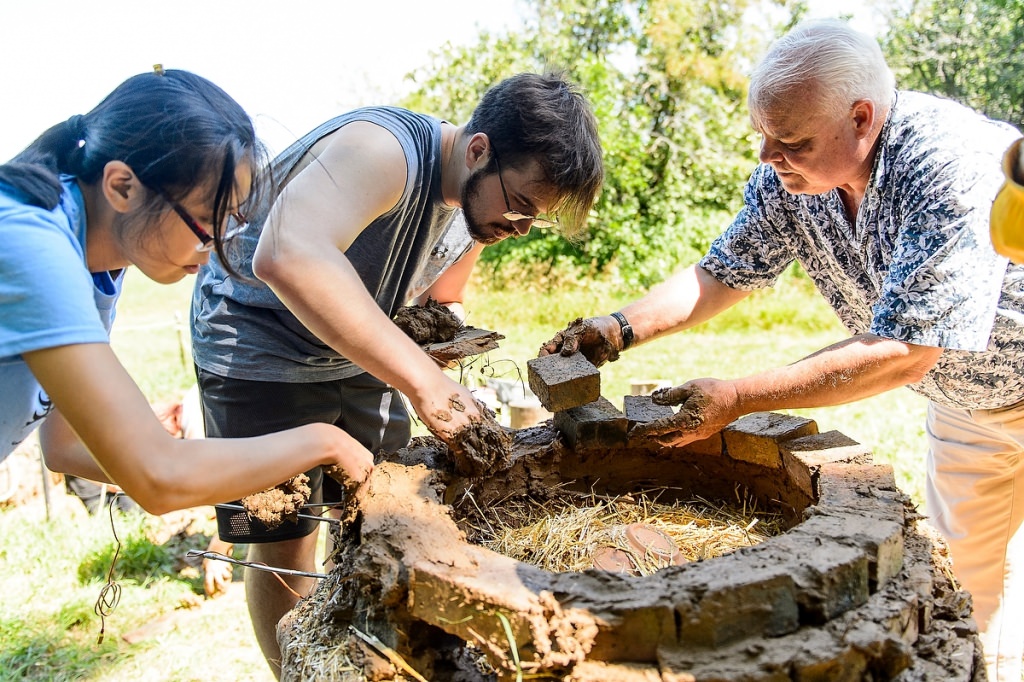 Wanqiao and Alan Lee (center) use mud and bricks to build a cap for the kiln. Photo: Bryce Richter

He pointed toward a rock at the edge of the outdoor lab, etched with foreign symbols. Several years ago, Heather Walder, a student in the course interested in ancient inscriptions, carved into it the first stanza of an Ancient Indian state proclamation by the Emperor Ashoka, from the third century B.C. That proclamation, written in the Brahmi script in a dialect called Prakrit, decreed the Buddhist ideals of peace and nonviolence.

Now splashed with lichen and beginning to show wear, the inscription exists today for the interpretation of other students. Walder took it on as an independent project in the course, which Kenoyer requires of all students, from bead making to metal forging to curing hides.

“We usually have a lot of fires going at the same time,” he said, wiping sweat from his brow.

Perhaps his statement was also a clever nod toward the kiln, which would soon support a fire of its own. Kenoyer promised to teach the students how to build one without modern tools and he soon got to work with a wooden “drill,” a wood-and-rope “bow,” and a notched wooden board that was to provide the raw material for making flames.

However, despite attempts by Kenoyer and several determined students, fire building was unsuccessful this day and ancient technology was eschewed for the modern lighter. Lunchtime had arrived and the group would need to tend the kiln well into the night. The kiln needed to reach 900 degrees Celsius and stay at that temperature for roughly an hour before the flames could be extinguished, Kenoyer said.

Before the fire was lit, Kenoyer passed out peanut M&Ms for the students to embed in the clay of the kiln and toss into the entrance (of course, he encouraged them to eat one or two as well).

“In India and Pakistan, people hand out sweets when firing the kiln,” he explained. He has spent most of his career studying ancient Indus Civilization in these regions of the world. “You make people’s mouths sweet so they can’t say bad things about your kiln.”

Sweets are also placed on the kiln in offering and, Kenoyer said, the M&Ms just happen to melt when it reaches the correct temperature. Soon, the kiln was adorned with circles of blue, red, yellow, green and brown.

Several days later, once the kiln had fired and been allowed to cool, the students returned to the outdoor lab to disassemble it and remove the pottery. Working in reverse, they soon opened the top of the kiln and peered at the vessels, statues and figurines inside. Kenoyer inspected each one, making mental and verbal notes about their sound, color and integrity. 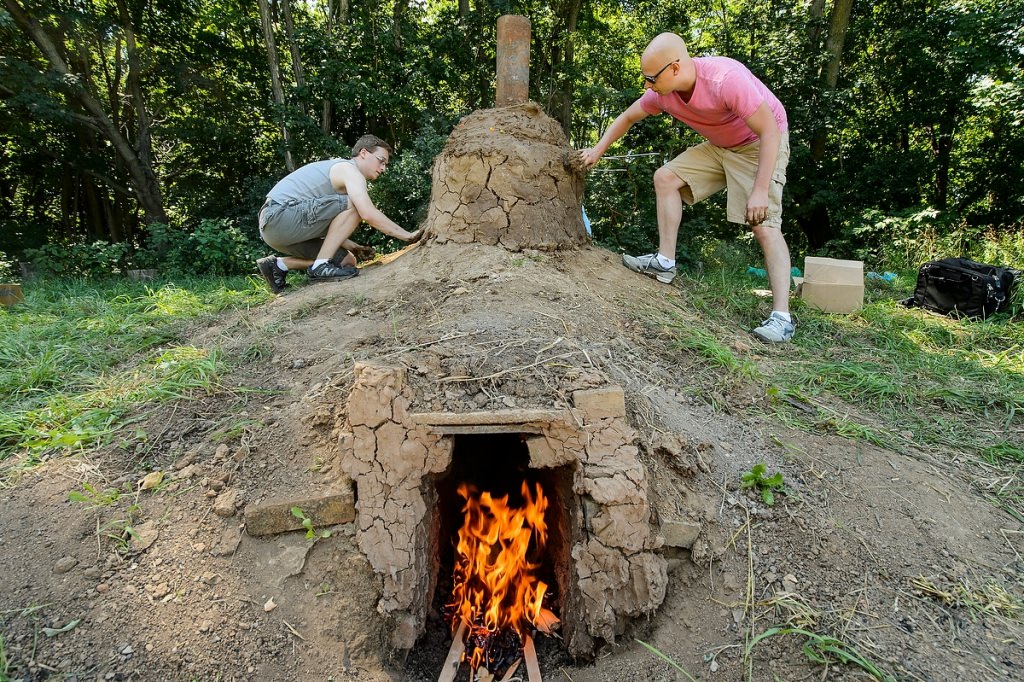 As a fire burns, students Dan Quigley (left) and Jamie Lanning (right) use mud to seal the cap of the kiln. Photo: Bryce Richter

“The kiln didn’t get as hot as we wanted,” Kenoyer said at first. An instrument placed in the kiln indicated the temperature reached just 700 degrees Celsius, though his observations indicated temperatures were variable in the kiln and in some places quite hot. He had a theory for what went wrong, but kept the students in suspense.

They took turns lifting pottery out, excited to see the final products. When it was empty, they covered the kiln with a tarp to protect it from the rain until it is fired again in the fall, when Kenoyer will teach an undergraduate seminar on ceramics in archaeology.

Finally, Kenoyer shared what went wrong: The pottery had been stacked so tightly that air flow was impeded. One of the flues was also blocked, which led to lower temperatures in some portions of the kiln, though some parts did get quite hot, he said.

The students’ next task would be to return to the campus laboratory and examine and analyze several clay disks, fired with their pottery, that had been produced using a variety of methods — with pure clay, with sand or with sand and straw — to measure how production materials impact how much a piece of pottery shrinks when fired. 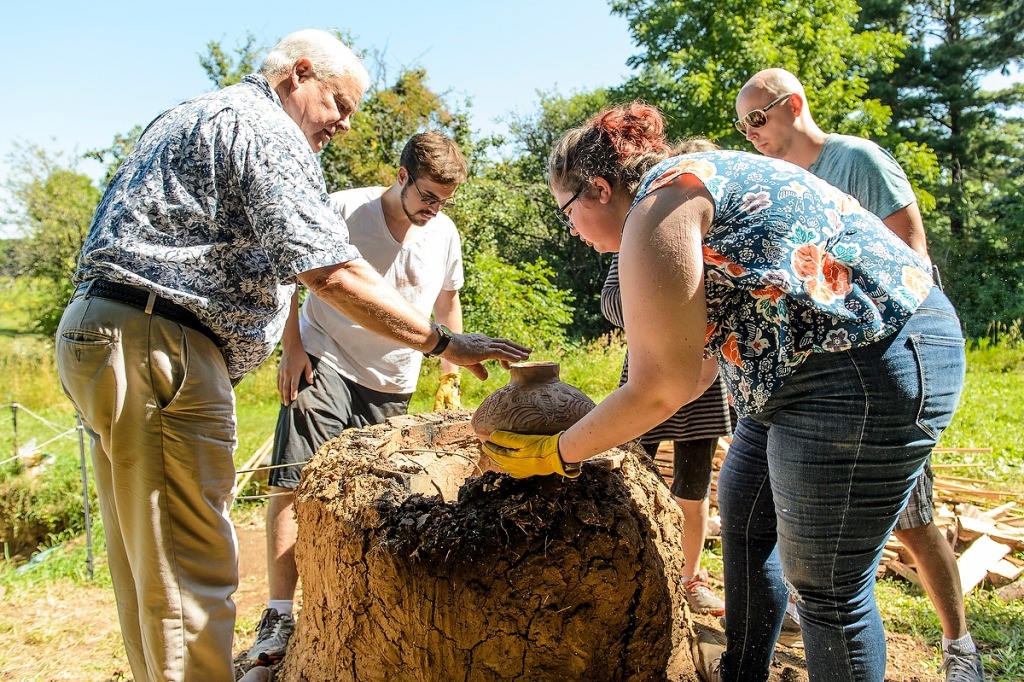 They would also pass their pottery around for other students to interpret how the pottery had been produced in the first place.

“This class helps provide new revelations about the ancient world and how things were done,” said Lanning, who was a student in the course several years ago. “You think staring at and studying artifacts that you understand them, but until you start doing it yourself, getting your hands dirty, there are aspects of them you will never fully understand. Why did they have this much sand in their clay? What created this marking?”