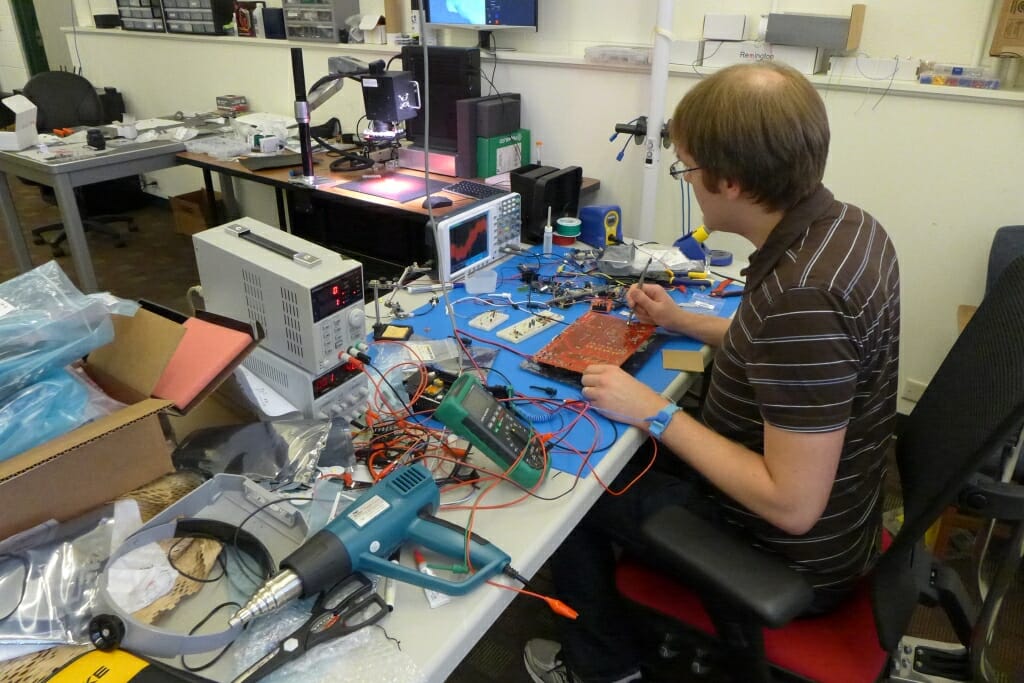 OnLume, a spinoff from the University of Wisconsin–Madison, is continuing to develop its system for identifying tissue types during surgery. The company’s technology causes chemical labels to glow in the operating room.

By distinguishing tumor cells from healthy ones, the system could help a doctor remove dangerous cells around the edges of cancer surgery.

The system also has other uses, says co-founder Thomas “Rock” Mackie, former director of the medical devices focus area at the Morgridge Institute for Research at UW–Madison, where the technology was invented. “We will detect different cell types, so a physician can see tumors, nerves or blood vessels. This technology will give a surgeon real-time guidance about what they are dealing with, and it can be used without turning off the normal surgical lights.”

As with many imaging systems, the image appears on an LCD monitor in the operating room. The OnLume system can be “tuned” to light up several detector molecules, offering the promise of color-coded surgery.

The OnLume invention offers the promise of color-coded surgery.

“Our system creates images based on both fluorescent and white light. If you don’t have a well-lit operating area while the imaging is being done, you can’t put the fluorescence into context with the surgical site.”

OnLume is exploring two initial markets for its technology, says Adam Uselmann,  OnLume CEO and one of four full-time employees. One would display a real-time video of perfusion – blood flow.  The success of surgeries like breast reconstruction depends on a good connection to the blood supply, and if deficiencies appear hours or days later, a repeat surgery may be necessary.  “This approach shows whether tissue is perfused or not, during the surgery rather than afterwards,” Uselmann says. “That enables immediate correction if needed.” 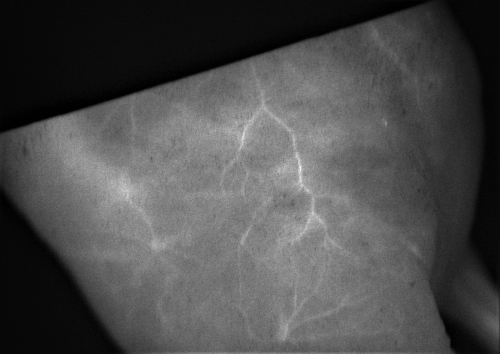 In OnLume’s system, the imager lights up the surgical field with a wavelength that excite a fluorescent substance joined to specific cell types, allowing the surgeon to identify cell types. Photo courtesy of OnLume

A second market, and potentially a larger one, would rely on the ability to detect cancer at the margins of surgery, helping ensure the removal of all tumor cells. In cancer surgery, especially in situations like brain cancer, the goal is always to remove just enough tissue to be safe.

OnLume’s process exploits a two-step physical phenomenon called fluorescence. First, a substance absorbs light, and then it re-emits light (“fluoresces”) at a specific wavelength, and hence a specific color. Fluorescent imaging starts with the injection of marker chemicals into the bloodstream. A cancer marker, for example, joins a “key” that links exclusively to tumor cells with the fluorescent unit.

At least a dozen fluorescent markers are in clinical trials, including one with Food and Drug Administration approval, Uselmann notes. “If the intense surgical light must be turned off to make the fluorescent image, a surgeon is temporarily blinded while their eyes adjust to the darkness. With our system, the big lights remain on.”

A system that color-tags different cell types represents another advance in medical imaging. The field began more than a century ago with X-rays, which show the location and size of bony internal structures. More advanced medical imagers, including functional MRI and PET scans, identify cells and/or show whether they are active.

“We can foresee the day when a surgeon would have color-coding of different tissue types,” says Mackie. “Red for cancer, blue for vasculature, and green for nerve tissue. It’s hard to imagine that this would not become universal for many types of surgery.”

Most of the co-founders were affiliated with the department of medical physics at UW–Madison, which has sprouted numerous spinoffs over the years, including a bone-density invention brought to market by Lunar, Inc., now a subsidiary of GE Healthcare in Waukesha.

Mackie, a long-time professor of medical physics, was a founder of TomoTherapy, a precision system for targeting radiation against tumors that is now owned by Accuray but still produced in Madison. Many smaller spinoffs from medical physics and its sister department, radiology, concern MR, CT and PET scanning, and radiation accuracy and safety.

Advanced testing of OnLume’s prototype will be performed in the surgery research and education suite at UW Hospital, at which companies can perform ergonomic, functional and customer acceptance tests on new products in a realistic surgical suite – one more way that UW–Madison supports invention and entrepreneurship in the medical realm, Mackie says.