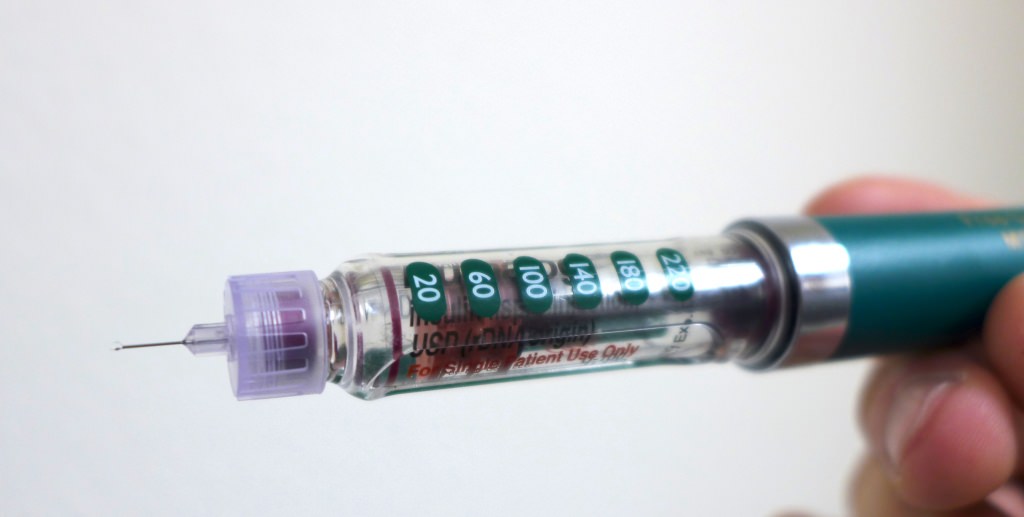 Shawn Michels’ new design will be attached to an insulin pen such as this one, which is used by diabetics who must inject insulin to regulate their blood sugar. Photo: David Tenenbaum

Insulin injection, if you’ve never done it, takes two hands. One hand holds the insulin injector. The other hand pinches the skin, to form a bulge so the hormone enters fat under the skin while avoiding muscle, where it can be absorbed quickly enough to cause a seizure.

Insulin is a hormone made by the pancreas that regulates sugar in the blood.

“Normally, you have an automatic pancreas,” says Shawn Michels, a University of Wisconsin–Madison student and diabetic who has invented an add-on to insulin injectors, “but my pancreas is manual so I have to give myself injections when I want to reduce my blood sugar levels or eat food with carbohydrates.”

By definition, Type 1 diabetics do not make insulin. In Type 2 diabetes, the body does not respond properly to insulin. 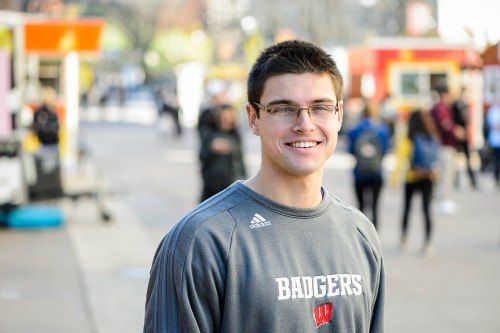 Shawn Michels is a University of Wisconsin–Madison student and diabetic who has invented an add-on to insulin injectors. Photo: Jeff Miller

Millions of diabetics around the world, both Type 1 and Type 2, have likely injected insulin billions of times into the easily accessible stomach and thighs. And many of them experience the side effect that bothered Michels — scarring and bruising — to some degree.

But Michels may be the only one who dwelled on the problem long enough to come up with a simple “Why didn’t I think of that?” solution.

Michels, a senior in the Wisconsin School of Business, ran track and played basketball and football in high school in Oconomowoc, Wisconsin, and was diagnosed with Type 1 diabetes on Christmas Eve of his junior year.

Insulin injectors use an ultrafine, mostly pain-free needle, but the need to use both hands during injection limits injections to the stomach and thighs.

Less than a year ago, after an estimated 10,000 injections, Michels dreamed up his “better idea” while home on winter break. After discussions with his mother, an accountant, and his father, an executive at a roofing company, Michels decided to pursue his invention. “I have always been interested in business from a young age, and my parents were my first mentors,” he says. “We talked about why some of my business ideas had potential, and why others didn’t.”

“I could never inject into my arm, butt or back but now it’s a one-hand process. I gave my thighs and stomach a month to rest, and now I don’t have bruising or scar tissue.”

The design is confidential, but essentially the device substitutes for the second hand, producing a bulge that holds the insulin needle stable in the subcutaneous fat. Using a 3-D printer, Michels made a succession of plastic prototypes, which he estimates he’s used about 1,000 times. “I could never inject into my arm, butt or back but now it’s a one-hand process,” he says. “I gave my thighs and stomach a month to rest, and now I don’t have bruising or scar tissue.”

Michels has filed a patent and does not allow the device to be photographed, but clearly it is something that could be molded from plastic at low cost. Unless Food and Drug Administration approval is required, he hopes to be on the market in about six months.

Although the device could benefit any diabetic who injects, the initial market will be those with a new diagnosis, Michels says. “The first injection can be scary, and having an attachment that will hide the needle and regulate the depth should be helpful.”

Michels sees other sales points for his device, which he has not yet named. For example, it would help a passenger in a car or airplane, where road bumps or turbulence now make for erratic injections. “Now I can easily give the injection because the device holds the needle steady against my arm,” Michels says.

“Getting started with insulin injections is daunting. You are sticking a sharp object into your tissue. If we can make this process easier, we can improve people’s quality of life.”

The device could also have safety benefits, he adds, since avoiding the need to pinch the subcutaneous tissue could eliminate an accidental injection into the finger.

On Oct. 4, Michels entered the Discovery to Product (D2P) Igniter program at UW–Madison, which is designed to advance some of the best ideas of faculty, staff and students to the marketplace. “I’m impressed by the talent at D2P,” he says. “The mentors are great. We give presentations in class and work on our public speaking skills.”

It was at a D2P session, Michels says, that the idea of also marketing to school nurses arose. Young patients tend to fear injections, he says, “but we’re concealing the needle, and that might reduce that fear.”

This fear is something that Michels knows viscerally, and even before market testing and the other fundamentals of starting a business, an inside voice tells him his invention has a market.

“I don’t care who you are, getting started with insulin injections is daunting,” he says. “You are sticking a sharp object into your tissue. If we can make this process easier, we can improve people’s quality of life.”