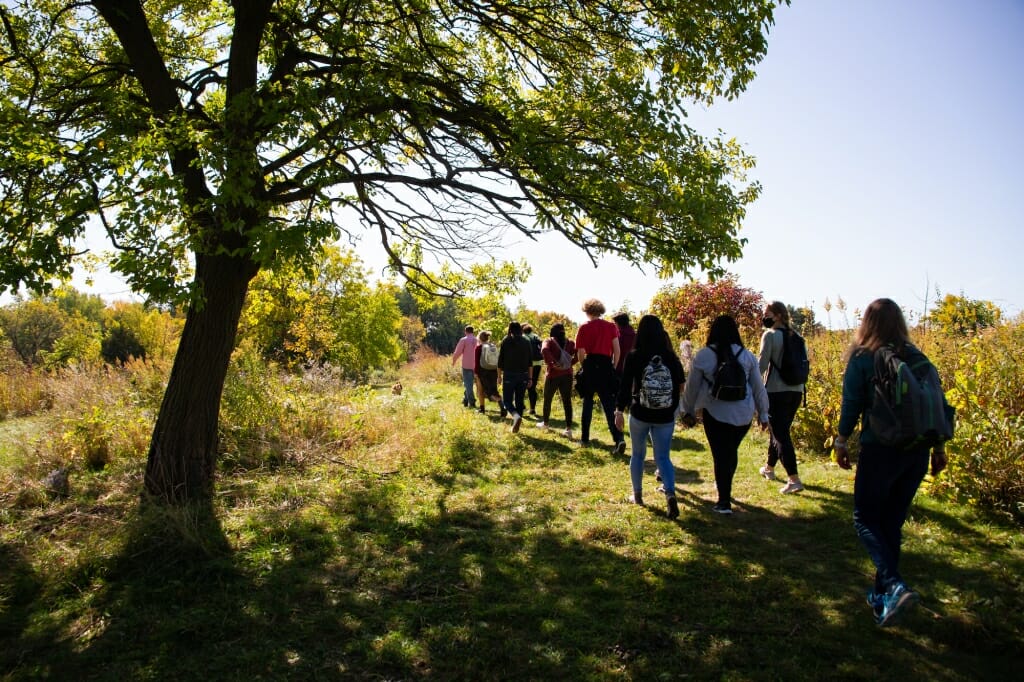 On a recent walking tour that took students along the Lake Mendota shoreline, UW­–Madison instructor Daniel Cornelius began by pointing out that the door panels at Memorial Union, built in 1928, include iconography depicting a Native American peace pipe.

To Cornelius, the easy-to-miss detail underscored a larger point: If you look closely, there are many clues to Madison’s Indigenous history in the land and its buildings. (The door panels themselves tell a complicated story. A 2018 report by a campus group studying the Ku Klux Klan’s early influence at UW­–Madison suggests the peace pipe symbols were included for less-than-respectful reasons given that the U.S. government was actively attempting to eradicate all American Indian languages and cultures until the 1970s.)

“For Indigenous peoples, the land is always teaching,” says Cornelius, a member of the Oneida Nation of Wisconsin and an outreach specialist at the Great Lakes Indigenous Law Center in the UW Law School. “Through an Indigenous lens, I’m trying to help students connect to place, so that no matter where they are, they’ll think more deeply about the land and its history.”

The First Peoples Principles of Learning instruct that “learning ultimately supports the well-being of the self, the family, the community, the land, the spirits, and the ancestors” and that learning should be “focused on connectedness, on reciprocal relationships, and a sense of place.” Although the principles were developed in Canada, the introduction of the U.S.–Canada border bisected Indigenous ancestral lands and territories, and Indigenous nationalities including the Ojibwe, the Oneida, and the Potawatomi can be found on either side of the border today, according to Aaron Bird Bear, director of tribal relations for UW–Madison.

Cornelius is co-teaching a course titled “Land Education” (Educational Policy Studies 150) with Claire Luby, an instructor in the Department of Horticulture, and teaching assistant Emily Miller. The course is part of a First-Year Interest Group learning community, or FIG. 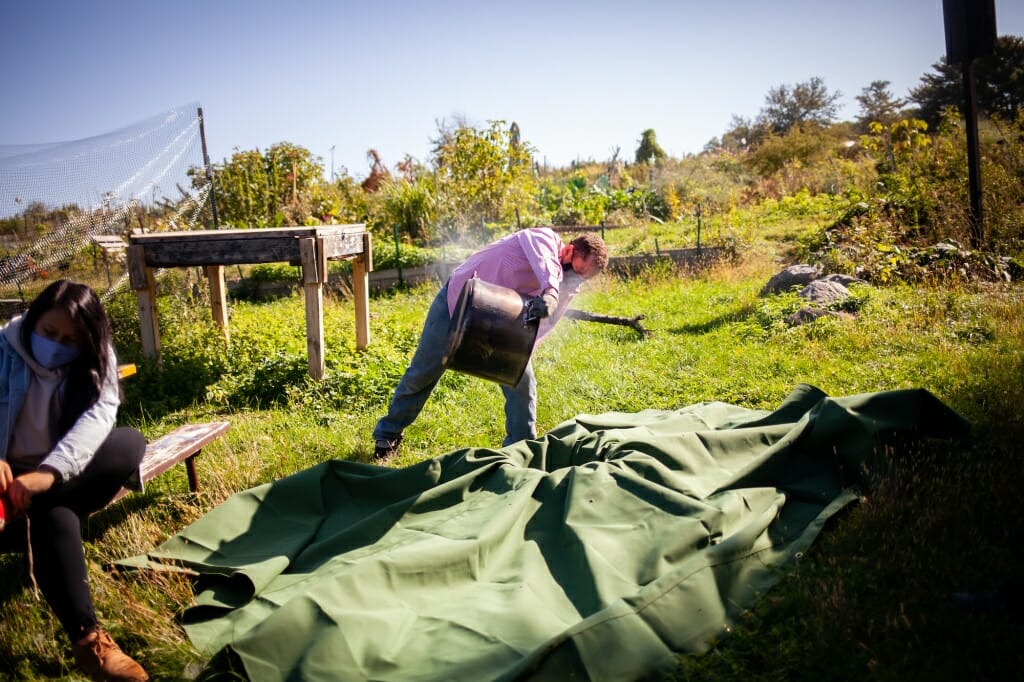 Instructor Dan Cornelius pours out hot, freshly parched wild rice to be danced on with a pair of new moccasins. Students were invited to experience “jigging rice”—the process of dancing on parched rice to remove the hulls, part of the agricultural workshop for the First-Year Interest Group “Listening to Land: Indigenous Education, Language, and Foodways.” Photo: Catherine Reiland/UW–Madison 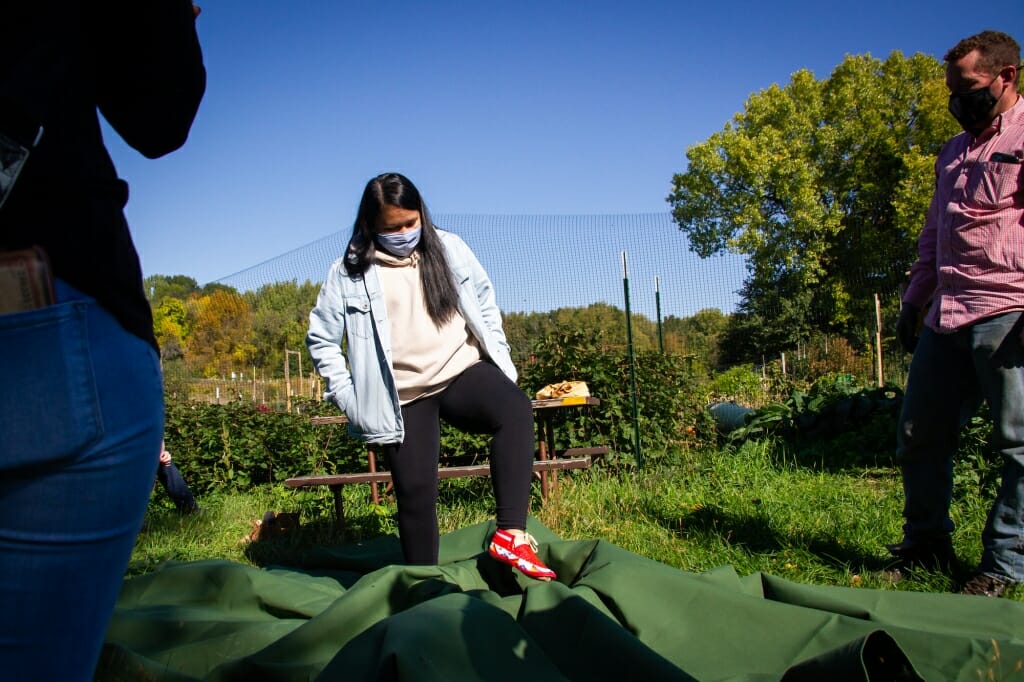 UW–Madison freshman McKaylin Peters dons moccasins to experience “jigging rice.” The bright red moccasins were hand-beaded by a family friend and given to Peters to commemorate her high school graduation. Photo: Catherine Reiland/UW–Madison

FIGs are designed specifically for first-year students at UW–Madison. Each FIG is a unique cluster of UW courses, usually three, linked together to explore a common theme or topic. Most FIGs are limited to 20 students, and all of the students in each FIG enroll in all of the classes in the set, forming a cohort.

This FIG, which is being offered this fall for the first time, is titled “Listening to Land: Indigenous Education, Language, and Foodways.” The other two linked courses in the FIG are: “First Semester Ojibwe” (American Indian Studies 301), taught by Brian McInnes, an associate professor of civil society and community studies in the School of Human Ecology; and “Principles of Environmental Science” (Environmental Studies 126), taught by Tim Lindstrom, a recent Ph.D. graduate of the Nelson Institute for Environmental Studies.

“I think of a FIG as a way to help students start their collegiate experience in a really positive way both academically and socially,” Cornelius says. “And hopefully it will foster that excitement for learning right from the start.”

Even before COVID-19, Cornelius and Luby intended their twice-weekly class to have lots of hands-on outdoor learning. Due to the pandemic, the outdoor component has become even more essential. Most weeks, students gather online for a virtual class and then in-person for an outdoor class.

The 15 students in the class have roasted Oneida white corn, learned how to dance on parched wild rice, toured campus-area effigy mounds, braided corn husks, and gathered for classes around the fire circle at the Eagle Heights Community Gardens. The walking tour of the Lake Mendota shoreline also included the state Capitol and State Street and took place on an uncharacteristically warm 70-degree November day.

At James Madison Park, Cornelius pointed out where Native American villages would have been located, and he noted the cliffs of Maple Bluff, where stone for the first state Capitol and many campus buildings came from. 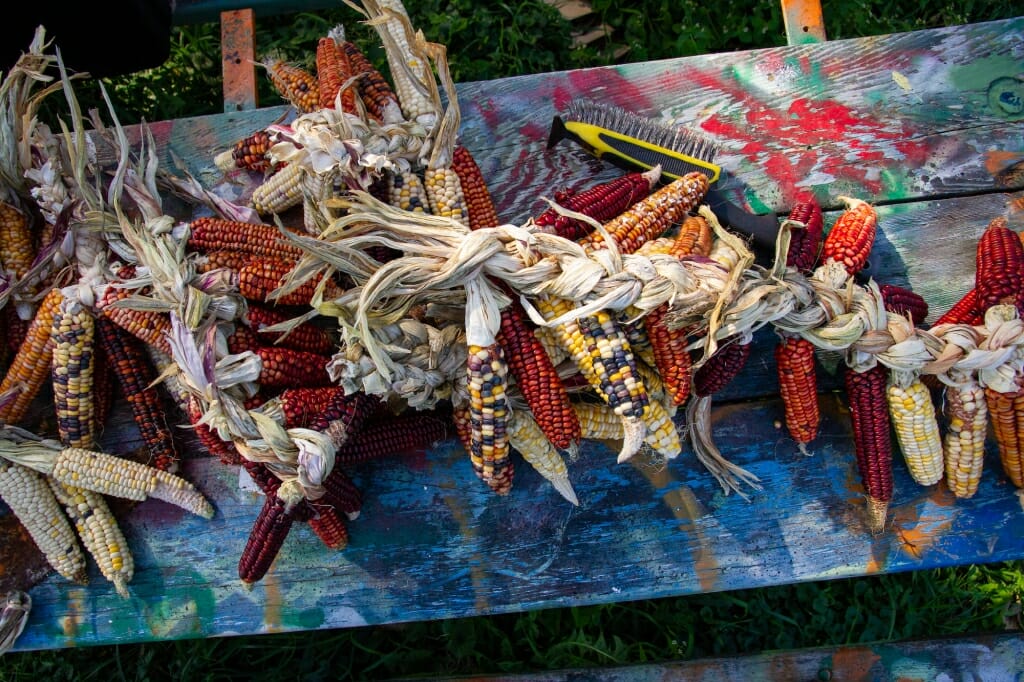 Bunches of braided corn, harvested from the Indigenous Research Garden at UW–Madison’s Arboretum, are on display at the Eagle Heights Community Gardens as instructor Dan Cornelius leads an agricultural workshop. Photo: Catherine Reiland/UW–Madison

The class has deepened students’ understanding of the campus and its Indigenous history. UW–Madison occupies ancestral Ho-Chunk land, a place the Ho-Chunk call Teejop (Dejope, or Four Lakes). In an 1832 treaty, the Ho-Chunk Nation was forced to cede this territory. The Our Shared Future heritage marker at UW–Madison recognizes this history.

“This class has made me realize how little I really know about the land,” says Jae Williams, a freshman from West Bend, Wisconsin. “I’ve always been interested in Native history, and I feel my education until now robbed me of that. It’s such an important topic, so I wanted to get that rolling.”

Williams is majoring in political science and community and environmental sociology, with hopes of attending law school.

Camille Miles, a freshman psychology major from Madison, says the class has opened her eyes to new layers of her hometown.

“I knew Madison had a rich Indigenous history and that this history isn’t always acknowledged, but I was aware of it only on a superficial level,” she says. “It’s nice to really dig into it and be able to actually understand it. I respect the land so much more now.”

Catherine Reiland, who oversaw development of the FIG as a program director in the Provost’s Office, says the FIG is an example of the kind of high-impact, community-building learning experiences that are taking place on campus despite COVID-19. 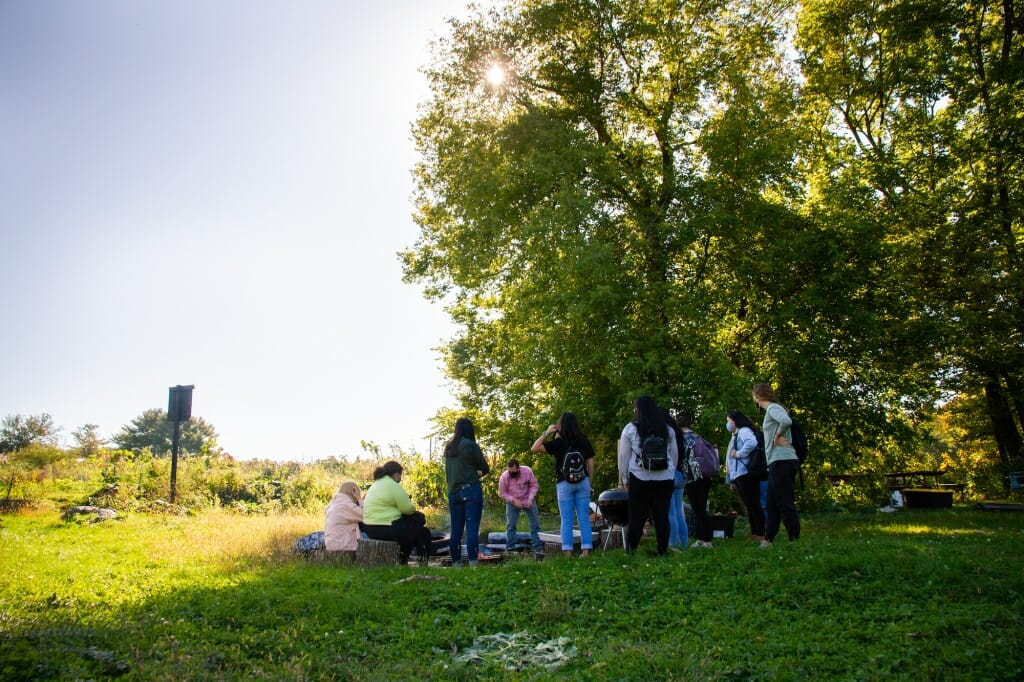 Cornelius, center, prepares a fire to parch wild rice and toast white corn for an agricultural workshop for “Listening to Land: Indigenous Education, Language, and Foodways.” The gathering took place in early October at a fire circle at the Eagle Heights Community Gardens. Photo: Catherine Reiland/UW–Madison

“Even during this topsy-turvy time, 15 first-year students have been able to immerse themselves in the key enterprise of connecting to the land and water of this place — Dejope — and in doing so, have nurtured and developed relationships with each other and to the broader campus,” she says.

The FIG is a tangible student-facing outcome of the work of the Native Nations_UW Working Group, Reiland says.

Next year, the FIGs Program will celebrate its 20th year on campus. It now offers more than 60 different FIGs and serves over 1,000 new students each fall.

“Our instructors self-select to teach in the program, so we get some of the most student-centric faculty and staff to work with our students,” says Nathan Phelps, an assistant dean in the College of Letters & Science and director of the FIGs Program.

The small class sizes and cohort-based approach provides an intimate interdisciplinary learning environment that many instructors supplement with outside-the-classroom activities to help build community and deepen engagement with their course content, Phelps says.

“As a result, FIG students consistently report a strong sense of belonging and satisfaction with their first semester,” he says. “We think this is why they regularly outperform their peers in terms of GPA, credit hours passed, and fall-to-fall retention.”