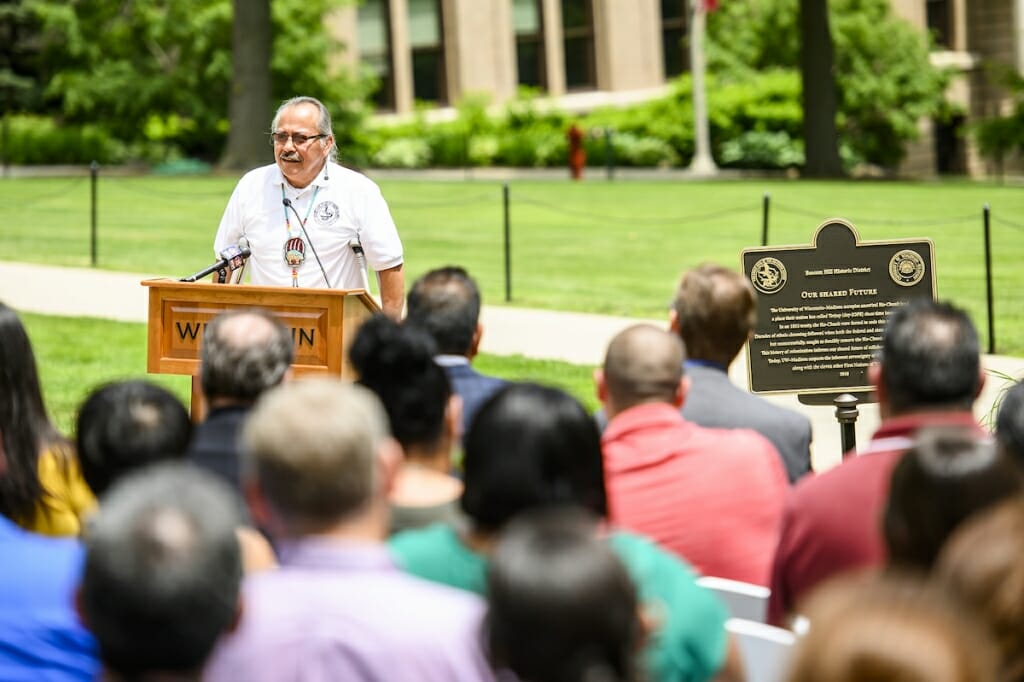 A new heritage marker on Bascom Hill at the University of Wisconsin–Madison recognizes the land as the ancestral home of the Ho-Chunk, acknowledges the circumstances that led to their forced removal, and honors the Ho-Chunk Nation’s history of resistance and resilience.

At a dedication ceremony June 18, UW–Madison Chancellor Rebecca Blank described the plaque as an important step in furthering a respectful, collaborative relationship with the Ho-Chunk Nation. About three dozen elected leaders and citizens of the Ho-Chunk Nation attended the ceremony, including President Wilfrid Cleveland.

He said the plaque addresses hard but crucial truths.

“For most non-Native people, the easiest way around these hard truths is to just ignore the real history of Wisconsin and the real history of the people who first lived here,” he said after the ceremony. “My hope is that this plaque will cause them to dig a little deeper, that it will be a spark for them to learn about the Ho-Chunk people and the sacredness we hold for this land.”

The heritage marker, titled “Our Shared Future,” is near the top of Bascom Hill, just to the side of South Hall. The plaque reads in full:

The University of Wisconsin–Madison occupies ancestral Ho-Chunk land, a place their nation has called Teejop (day-JOPE) since time immemorial.

In an 1832 treaty, the Ho-Chunk were forced to cede this territory.

Decades of ethnic cleansing followed when both the federal and state government repeatedly, but unsuccessfully, sought to forcibly remove the Ho-Chunk from Wisconsin.

This history of colonization informs our shared future of collaboration and innovation.

Today, UW–Madison respects the inherent sovereignty of the Ho-Chunk Nation, along with the eleven other First Nations of Wisconsin. 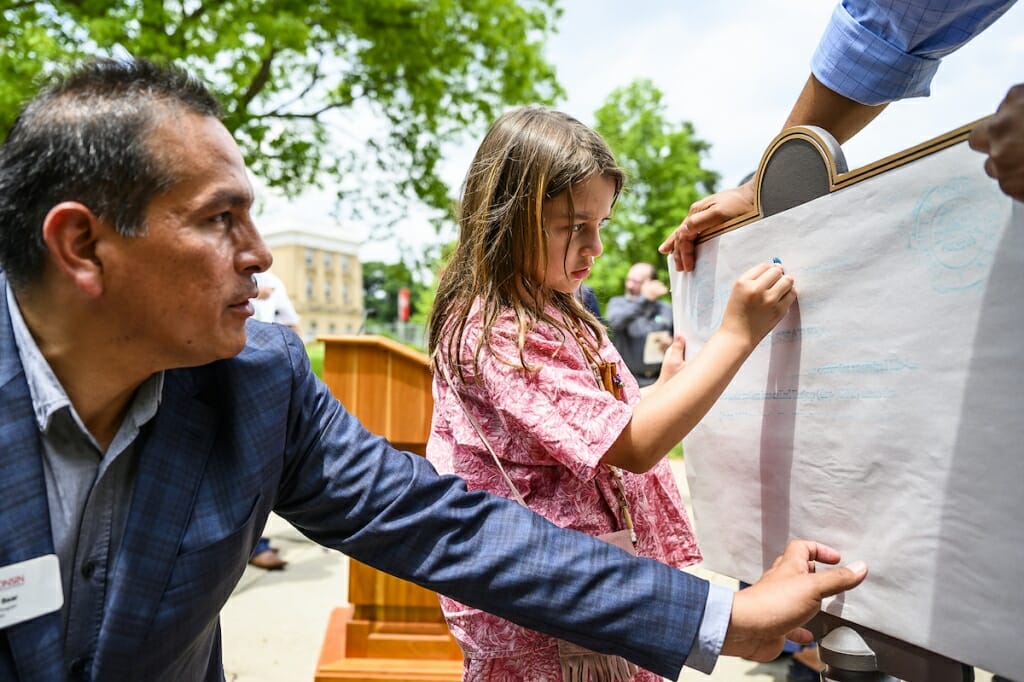 “No plaque or monument can ever adequately convey a difficult and complicated history,” she said. “But it can start a conversation that moves us from ignorance to awareness. So today is the beginning of an intentional effort to teach our shared history.”

Blank said the university will incorporate the marker and the larger story behind it in multiple venues:

Blank said she is asking several units across campus to host the marker over the next year to make it as visible as possible. The first location will be Bascom Hall. Other locations will be announced later this year. The marker will return to its permanent home on Bascom Hill in the fall of 2020.

The university’s director of tribal relations will assist with this effort and will work with Native Nations in Wisconsin to identify other areas for collaboration, Blank said. The university is in the process of hiring for the new position.

Paul Robbins, dean of the Nelson Institute for Environmental Studies, told the crowd the plaque is just a small part of the university’s pledge four years ago to forge a better partnership with the 12 Native Nations of Wisconsin. In 2015, the Nelson Institute convened a leadership summit with representatives from the 12 Nations. That led the following year to the creation of the Native Nations_UW Working Group. A second leadership summit was held in Madison this past May.

Many positive projects have come from the effort, Robbins said.

“All of the projects are aimed at reconciliation and recognition,” he said. “And amongst those are an effort to memorialize the history of this land so that it can be shared with students and faculty and the community with honesty.” 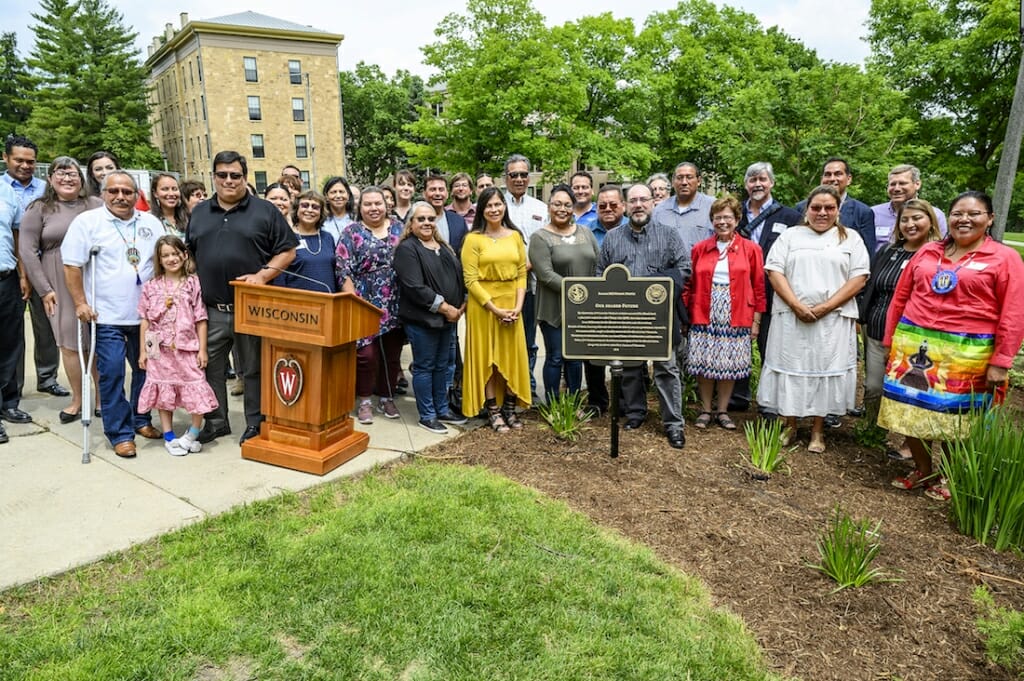 Members of the Ho-Chunk Nation are pictured following the June 18 dedication of a heritage marker on Bascom Hill. Several UW–Madison officials, including Chancellor Rebecca Blank, joined them for the group photo. Photo: Bryce Richter

Aaron Bird Bear, an assistant dean at the School of Education, said there’s an incredible hunger among students, faculty and staff to know more about the land that is now the UW–Madison campus. He is among university employees who give First Nations cultural landscape tours to fill in some of that history. The heritage marker will further that goal, he said.

“We’re excited for the ability to tell a deeper human story of this space as we continue to deepen our relationship with the Ho-Chunk people,” he said.

Cleveland said he appreciates the university’s efforts and looks forward to a continuing partnership.

“A plaque is a nice gesture, but it’s really just a support for the actions that need to happen,” he said. “The past cannot be changed, so the important part is how we continue our relationship in the future.”