A pioneer in the study of neural cells revealed today (Oct. 23, 2018) how a single mutation affecting the most common protein in a supporting brain cell produces devastating, fibrous globs. These, in turn, disturb the location of cellular processing units, harm the flow of energy and signals through the brain, and reduce the formation of myelin, an essential insulator for neurons.

Su-Chun Zhang, a professor of neuroscience at the University of Wisconsin–Madison who is a medical doctor and Ph.D. researcher, looked at astrocytes, which are distinct from the signal-transmitting neurons, but play multiple roles in the brain. Astrocytes comprise 20 to 40 percent of cells in the brain. 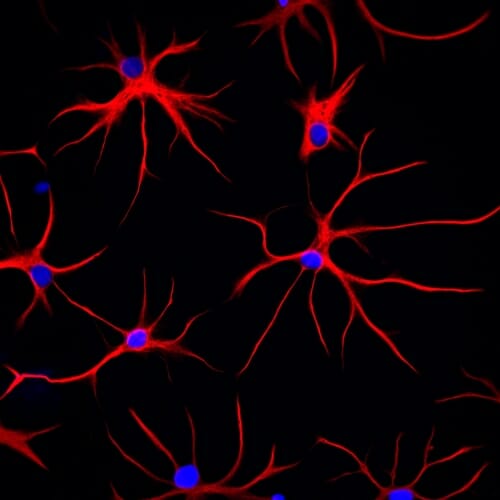 Named for their star shape, these astrocytes — derived from human stem cells — show their structural protein, GFAP, in red. DNA in the cell nucleus appears blue. Courtesy of Jeffrey Jones

Astrocytes in the study were grown from adult cells that were converted into stem cells. The adult cells were donated by the families of two patients with Alexander disease, a rare, fatal genetic disorder.

Once grown in a lab dish, the astrocytes showed the hallmarks of Alexander, including tangles built of a protein called GFAP, and errant locations of mitochondria and other cellular processing units.

After decades of emphasizing the role of neurons, astrocytes and other glial cells are coming into greater focus for their essential contributions to the health of neurons – and for their role in disease.

Alexander disease itself is, fortunately, extremely rare, says Zhang, but rare diseases matter in neuroscience. “We often grow to understand a disease process through rare diseases. One mutation discovered in a family with Lou Gehrig’s disease led to the discovery of the fundamental pathogenesis of ALS, and the same is true for Parkinson’s and Alzheimer’s.”

Through studies by co-author Albee Messing, a professor emeritus of comparative biosciences, and others at UW–Madison, Alexander has been linked to a mutation in the GFAP gene, “which encodes for a protein that is very, very common in astrocytes,” Zhang says.

GFAP is so common, in fact, that astrocytes are identified through its presence, Zhang says. “GFAP was a big player for some reason, but nobody knew the broad range of effects, up until today.” 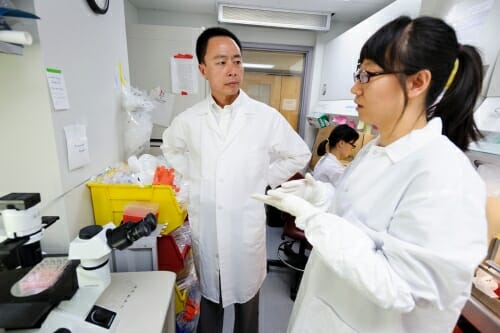 Su-Chun Zhang, professor of neuroscience in the School of Medicine and Public Health, talked with postdoctoral student Lin Yao as she prepared stem-cell cultures in Zhang’s lab at UW–Madison’s Waisman Center in 2013. Photo: Jeff Miller

The study published today in Cell Reports, describes how Zhang, working with first author Jeffrey Jones, now a postdoctoral fellow at the Salk Institute, and others, used cell cultures to track down the role of the GFAP mutation in Alexander disease.

Alexander disease, a decades-long focus of Messing’s research, provided an ideal keyhole to study the most common protein in astrocytes, Zhang says, “but after 20 years, we still had not figured out how the mutant GFAP caused this fatal disease.”

Although common in astrocytes, GFAP is not present in other cell types.

The damage seems to start with aggregated filaments inside the astrocytes that cause widespread tangles and likely trigger a broad disturbance in cellular subunits that produce proteins, process energy and store chemicals. “The organelles — the mitochondria, endoplasmic reticulum and lysosomes — were all distributed abnormally,” Zhang says, “and that was a clue that GFAP is critical for guiding organelles to their correct locations.”

After decades of emphasizing the role of neurons, astrocytes and other glial cells are coming into greater focus for their essential contributions to the health of neurons – and for their role in disease.

There are no immediate clinical implications, but the study’s impact could nevertheless be broad, Zhang says. “This protein is altered in astrocytes in Alexander, and virtually every single neurological disorder, including Alzheimer’s, Parkinson’s, Huntington’s, ALS and autism.”

Growing human brain cells in lab dishes was key to the findings. Zhang was the first scientist to convert all-purpose human stem cells into neural cells. He has since learned to differentiate these stem cells into a wide range of brain cells, including neurons, the classic signal carriers, and the “helper” cells such as astrocytes.

Astrocytes carry out a great number of functions, such as supporting cells in the blood–brain barrier, supplying nutrients, regulating the balance of calcium ions, and helping with myelin insulation for neurons.

Zhang, using lab-forged human brain cells, was able to avoid complications inherent in animal studies. “For Alexander, like any other disorder, we have used flies, mice and rats. When we express the mutant protein, the protein becomes aggregated instead of filamentous. But with animals, we always have some issue, because when we change the protein level, the cells of course will respond. But the exact relationship to the disease is a question mark.”

Growing human brain cells in lab dishes was key to the findings. Zhang was the first scientist to convert all-purpose human stem cells into neural cells.

Using human cells with the real-world mutation sidesteps some uncertainty, Zhang says, and using CRISPR-Cas-9 gene editing to reverse the damage further proved the importance of the GFAP mutation.

Broadly speaking, he adds, “we saw something we did not expect, that the mutation created problems for the molecular trafficking system” that moves molecules in, through and out of the cells. The mutation also harmed a signaling system based on movement of calcium ions.

One mutation, thus, has profound effects, he says. “Without the correct traffic system, molecules cannot move in and out of the cell correctly, and so the cell cannot do its job. GFAP is fundamental. And when we corrected the mutation, the cells looked normal.”

GFAP, he stresses, “is the most abundant protein in astrocytes, and we already knew it’s altered in nearly all neurological conditions. While understanding how Alexander disease occurs is important, we’re even more excited by the fundamental biology.”