The lab of Kris Saha at the University of Wisconsin–Madison has developed an innovative combination of gene-editing tools and computational simulations that can be used to develop new strategies for editing genes associated with genetic disorders.

Their promising platform advances the CRISPR genome-editing field and could lead to effective treatments for many diseases, not just Pompe disease.

“The exact mutations seen in the Pompe patients are not in an existing animal model, so we cannot do all of the preclinical studies that we would like to do in order to evaluate the safety and efficacy of different genome editing strategies,” says Saha, a professor of biomedical engineering at UW–Madison’s Wisconsin Institute for Discovery. “We need a way to think about how we go from patient material to a therapy without having to build an animal model, a process that takes months to years and hundreds of thousands of dollars.” 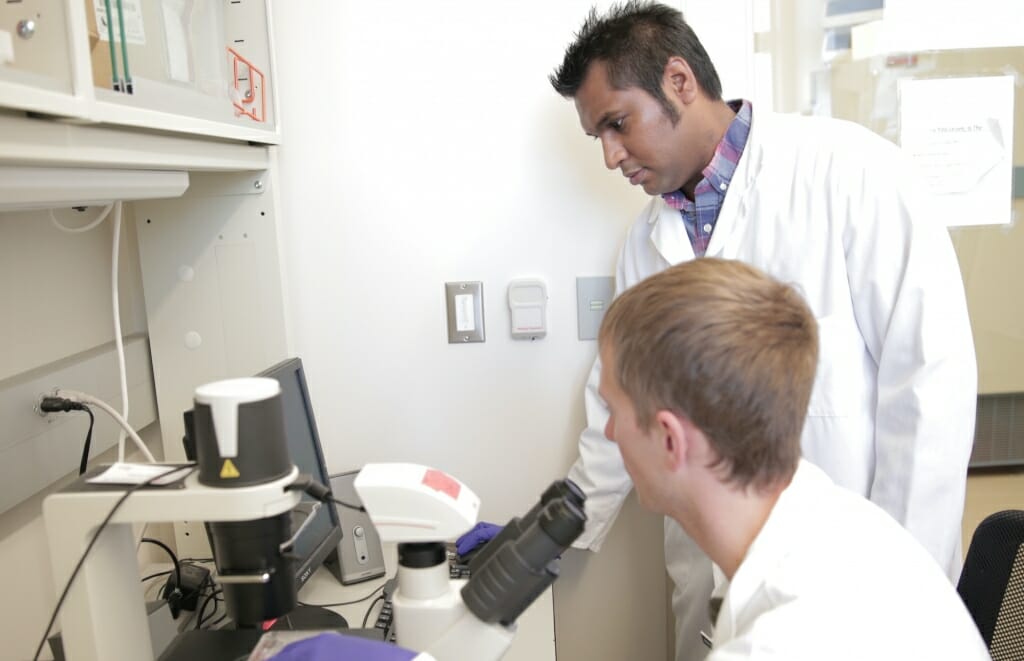 The lab of Kris Saha (standing) has developed an innovative combination of gene-editing tools and computational simulations that can be used to develop new strategies for editing genes associated with genetic disorders. Photo: Stephanie Precourt

In the first few months of life, an infant with Pompe disease becomes weaker and weaker as glycogen builds up in their muscles, their cells unable to break the complex sugar down. Multiple mutations in a gene called GAA prevent their cells from correctly producing the proteins needed to make lysosomes, which turn glycogen into glucose, the fuel that powers cells. Left untreated, most patients with Pompe die within a year.

Developing effective therapies for such diseases can be difficult for a number of reasons. First, diseases like Pompe have no animal models in which to test treatments, a typical step in therapy development. And diseases like Pompe — and many other inherited diseases — are autosomal recessive, which means that mutations are present on both copies of a chromosome. Two sets of mutations require two successful gene-repair events for maximum effect. Further complicating the matter is the fact that many diseases are polygenic, resulting from mutations in two or more genes or multiple mutations spread across a single gene, as is the case for Pompe disease.

The Saha lab’s new approach uses precise gene-editing tools to edit both faulty alleles simultaneously within individual cells to restore function. In its new report, the research team used induced pluripotent stem cells derived from Pompe patients to reproduce the exact GAA mutations that cause the disease and to approximate the resulting tissue pathology.

To fix these Pompe mutations, the lab turned to a specially designed, ultra-precise genome-editing system described in a previous study led by Jared Carlson-Stevermer, who was at the time a graduate student in Saha’s group. That report established an up to 18-fold increase in precision of gene edits by combining a DNA repair template with the cutting machinery of CRISPR in one particle.

In the current study, the researchers used the method to fix two mutations at once in Pompe-derived cells. By doing so, the researchers improved cell function dramatically, bringing lysosome protein production up to the level of healthy cells without any major adverse effects, which sometimes emerge from gene editing.

The research advances the CRISPR genome-editing field and could lead to effective treatments for many diseases.

But treating cells in the laboratory, while providing crucial insight, is not the same as creating a therapy for patients. A critical step in developing treatments usually involves testing on animal models to evaluate efficacy and safety, a major obstacle for Pompe disease and other genetic conditions that lack viable animal models.

To determine the best therapeutic strategy for polygenic diseases — evaluating different doses, delivery mechanisms and timing, risks and other factors — the research team instead built a computational model that allows it to predict the outcomes of various conditions.

“This allows us to survey a wider scope of many different gene therapies during the design of a strategy,” says coauthor Amritava Das, a postdoctoral associate at the Morgridge Institute for Research. “The computational approach is critical when you don’t have an animal model that resembles the human disease.”

After pumping close to a million simulation conditions through the computational model, Das, Carlson-Stevermer and Saha have gained key insights about the delivery of gene editors into the livers of human infants with Pompe disease without having to subject a single patient to experimental treatments. And those insights establish that the multiple-correction genome-editing approach tested in stem cells may be an effective treatment for Pompe and other polygenic recessive disorders.

The computational model, which can be easily adapted for other polygenic conditions, is a big step for the development of therapies for diseases like Pompe and lays the groundwork for a bridge from laboratory studies to the clinic. And as more measurements are added to the model, it will gain more predictive power.

This work was supported by the National Science Foundation (CBET-1350178, CBET-1645123), the National Institutes of Health (1R35GM119644-01), the Environmental Protection Agency (EPA-G2013 –STAR-L1), the University of Wisconsin Carbone Cancer Center (P30 CA014520), the Wisconsin Alumni Research Foundation, and the Wisconsin Institute for Discovery.