For the past five years, CRISPR-Cas9 technology has revolutionized the field of gene editing due to its ease and low cost. But although this technology reliably finds and cuts the targeted stretch of DNA sequence, fixing that cut as desired has been something of a hit-or-miss process. Error rates as high as 50 percent are a particular problem when the goal is to correct typos in the DNA that cause genetic disease.

Now, a team of researchers led by Krishanu Saha, a professor of biomedical engineering at the University of Wisconsin–Madison, has made the fix less error-prone and published its approach today (Nov. 23, 2017) in the journal Nature Communications. 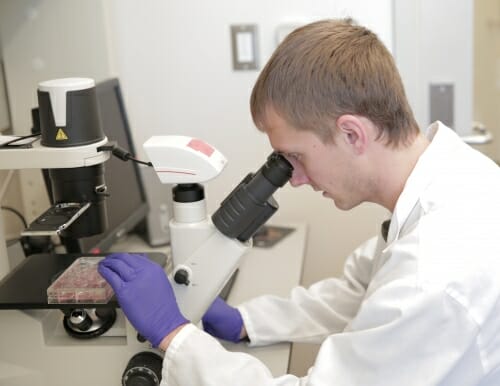 Compared to standard CRISPR technology, the new method improves the likelihood of rewriting the DNA sequence exactly as desired by a factor of 10. The researchers achieved this much greater precision by taking advantage of a molecular glue, called an RNA aptamer, to assemble and deliver a complete CRISPR repair kit to the site of the DNA cut.

“The kit provides not only the molecular scissors, but also the correct template for the cell machinery to fix the DNA cut with,” Saha says. “Since the RNA aptamer is strong and very stable, everything we need is getting to the right place within the cell in one fell swoop.”

In standard CRISPR technology, the bacterium-derived Cas9 protein (the scissors) and a guide RNA molecule (to locate the targeted DNA sequence) are delivered to the cell. When the scissors cut open the DNA molecule, the cell mends the gap with nearby DNA templates, but more faithful rewriting results from attaching the desired templates to the Cas9/RNA package with the molecular glue. 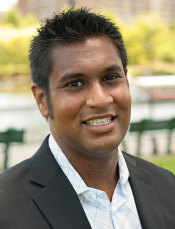 The new method has several other advantages over current technology. First, the off-the-shelf kit contains only non-viral reagents, which simplifies the manufacturing process and reduces safety concerns for clinical applications of genetic surgery in the future. Second, attaching an RNA aptamer to the kit is much easier than modifying the Cas9 protein and provides greater flexibility.

“We can add other biomolecules to this kit, much like you would click an extra Lego block into an already existing structure,” says Jared Carlson-Stevermer, a graduate student in Saha’s lab and the paper’s first author.

One example of such a Lego block are fluorescent tags that allow researchers to easily identify all precisely edited DNA sequences in a population of cells.

“By fishing out these tags, we can achieve an accuracy rate of 98 percent,” Saha says.

Other types of Lego blocks could help activate the repair kit in the right kind of tissue: the eye for treating retinal disorders, or the muscle cells of muscular dystrophy patients. In the current study, the researchers corrected a specific mutation in stem cell lines derived from a Pompe disease patient with greatly improved fidelity. Pompe disease is a rare inherited disorder caused by the buildup of complex sugar molecules in organs and muscle tissue.

“There is no shortage of candidates for this kind of genetic surgery, as tens of thousands of diseases are due to small sequence errors that could be fixed with this technology,” Saha says. “Our next goal is to test the method in animal models and work on writing longer stretches of DNA.”

The study was primarily funded by the National Institutes of Health (1R35GM119644-01) and the National Science Foundation (CBET-1350178, CBET-1645123). Several co-authors have filed a patent application with the Wisconsin Alumni Research Foundation.