Wisconsin cheese is at least as old as the state. The University of Wisconsin–Madison has one of the world’s great institutions of dairy food science, the Center for Dairy Research.

And yet when milk is converted into cheese, science only takes you so far, says Tom Dahmen, a second-generation cheesemaker who directs the Chula Vista cheese factory near Browntown, in southwestern Wisconsin.

“I’m a big believer in heavy-duty science, but there is always a bit of magic in making cheese,” says Dahmen, who began washing cheesecloths at age 6. “The rest is intuition, experience, even black magic.”

At Chula Vista, those ingredients are combined to produce a string cheese called Oaxaca. In March, Oaxaca (wa-HA-ka) received the Best in Class award in the Hispanic melting cheese category at the 2016 World Championship Cheese Contest in Madison. The center helped the company create the cheese. 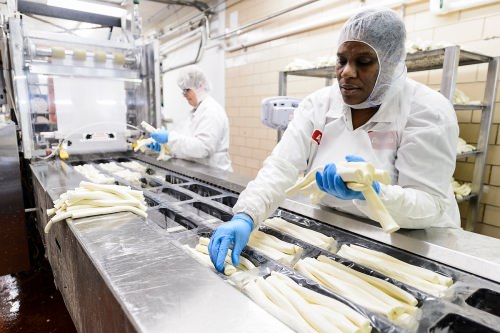 Oaxaca is a white, mild-flavored cheese used in many Mexican dishes. The cheese gets its name from the Mexican state where the style originated.

Chula Vista and V&V Supremo of Chicago were cheesemaking partners for decades. This September, V&V bought the plant, where employment has risen to 80 from 34 about seven years ago.

Although Chula Vista purchased and sold Oaxaca cheese for several years, “we were never happy with the quality, so we decided to move production in-house,” Dahmen says. “I had spent 14 years making a related style but there were challenges to our ‘make,’ so we went to CDR. They helped us from the beginning.” 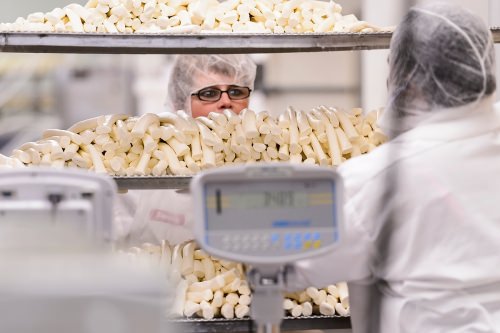 Funded by dairy farmers and industry, the Food Science Department maintains a licensed, operating dairy plant on the UW–Madison campus. At the center, more than 30 researchers conduct basic and applied dairy research on the functional, flavor and physical properties of milk and cheese, as ingredients and finished products.

CDR staff build on a combined total of almost 300 years of experience in industry, and more than 400 years in academia, to assist the dairy industry in developing and testing products for national and international markets.

Starting around 2010, Dahmen and Alan Hamann, V&V’s senior manager of quality control, talked over the details of fat-protein ratios, milk solids, chemistry and pH with CDR.

“You have to control all of these factors even as the milk changes subtly from one truckload to the next,” says Hamann, who has more than 36 years of experience in the dairy industry. 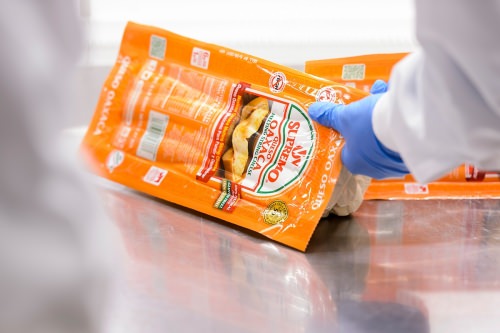 Packages of Oaxaca-style string cheese are ready to be shipped out. Photo: Jeff Miller

Once the ideas were collated, they needed to be tested. At Browntown, each test would require 5,000 pounds of milk, Hamann says. Vats at CDR, however, would require only 500 pounds, reducing cost and eliminating errors attributable to running tests with different batches of milk. “At the CDR, we could test several variables at once,” Hamann says. “Working at CDR drastically cuts your timeline, and offers much more control.”

When the improved Oaxaca reached the market in 2015, Chula Vista was producing one or two vats per week. Now the company makes that much in a day.

Oaxaca cheese is produced using a procedure similar to that used for fresh mozzarella. Pasteurized milk is set (coagulated) and cut in a stainless-steel vat and turned into curd slabs that are moved to a cooker-stretcher, a machine where heating and repeated folding links protein molecules, forming the familiar elastic product called string cheese. 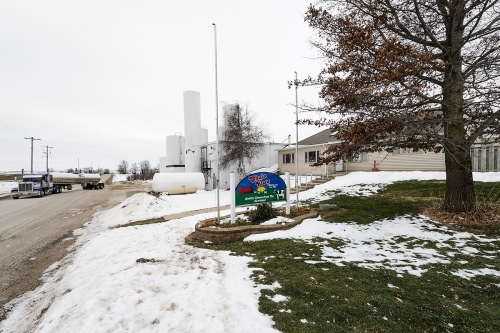 The stretched curd is then formed into cylinders by six nozzles, cut to length and packaged for shipment to stores ranging from “mom and pops” to Wal-Mart, says Philip Villasenor, V&V’s vice president of manufacturing.

As employment tightens, particularly in rural areas, CDR links manufacturers with existing resources for economic development. “It’s not just ‘develop the product and you are on your own,'” Grassman says. 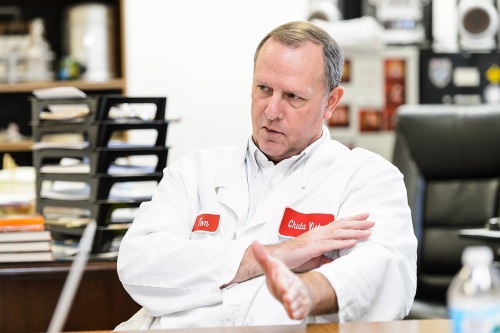 Tom Dahmen, plant manager at Chula Vista Cheese Company in Browntown, Wis., talks with a reporter on Dec. 27, 2016. Chula Vista Cheese created a successful Oaxaca-style of string cheese with the consulting and test-batch help of the Center for Dairy Research at the University of Wisconsin–Madison. (Photo by Jeff Miller/UW-Madison) Photo: Jeff Miller

But when you visit Chula Vista, it’s all about the cheese. Even though Chula Vista aims for a standardized, pure product, “every vat is a controlled experiment,” says Dahmen. “We are predicting what is going to happen, and we are pretty accurate, but this is a living system, and unplanned things happen: A pump dies. A cooler dies. People don’t show up. But once you start a batch, you have to finish.”

Those snafus are familiar to both Chula Vista and CDR, says Dahmen. “The  beauty of working with CDR is that they are heavy, heavy on science, but their people have all worked in the industry. They have this blend of science and art that you can only gain from experience. For our Oaxaca cheese, they greatly shortened the timeline to reach the product quality we were looking for.”