Like valium for fish? UW-Madison discovery aims to solve stress in fish farms 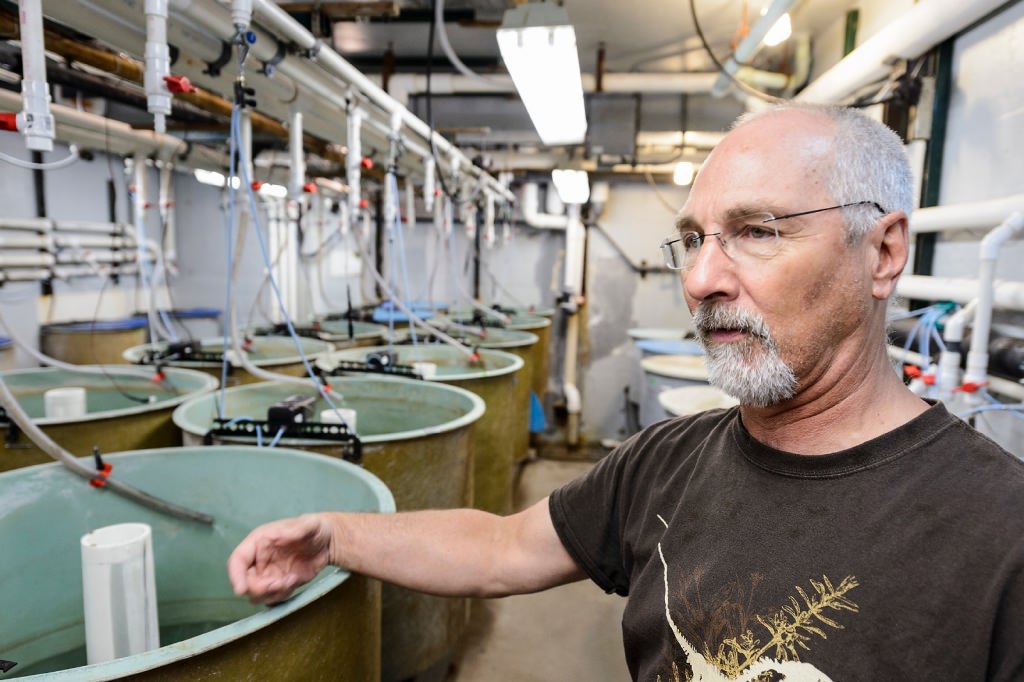 Terence Barry, senior scientist in animal science, shows one of many tanks of fish being studied at the Water Science and Engineering Laboratory. Barris is an expert in aquaculture and the stress response in fish. Photo: Jeff Miller

A University of Wisconsin–Madison group that discovered a way to improve survival in fish farms has begun to unravel the mechanism behind their unexpected finding. In a series of experiments, they are probing how an oil from a gland that birds use to condition their feathers can keep fish alive.

The most likely explanation involves an alteration in their response to stress.

The idea that fish suffer stress seems tailor-made for a comedy routine, but the notion is not post-modern standup. Rather, it is an invention that may spawn a new UW–Madison spinoff within the year. Even now, however, the saga illustrates how much creativity and work is needed for a startup idea to swim from the “Eureka!” moment to a promising young spinoff.

The story began when animal science professor Mark Cook was exploring underused products from animal agriculture. Curious about the preen gland, he and postdoctoral researcher Jake Olson noticed that the gland secreted an anti-inflammatory compound. Aware that a previous test had shown that a different anti-inflammatory had accelerated fish growth, Cook and Olson contacted Terry Barry, a university expert in aquaculture.

“We did a quick study with fathead minnows, and they had better growth and survival,” says Barry, who is an expert on fish stress responses. “But when we tried rainbow trout and yellow perch, we did not see the growth acceleration.” 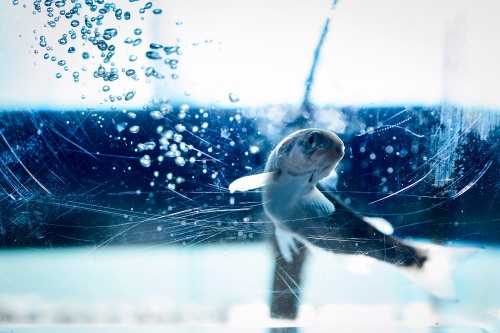 A female Norwegian Atlantic salmon swims in a fish tank as part of a research study at the Water Science and Engineering Laboratory . Photo: Jeff Miller

But another result jumped out of the fish tanks in the Water Science and Engineering building along Lake Mendota – dramatically improved survival. “Every time they got stressed because the oxygen level had dropped or water temperature suddenly changed, fish fed a derivative of the preen-gland oil survived, but the others did not.”

The inventors call this oil cosajaba pronounced “co-SA-juh-buh.” Stress in fish farms is hardly top of mind for most people, but it is, for example, a major contributor to annual losses of about $250-million to Atlantic salmon farms in Norway. The stressors include events like vaccination, netting and the transition from fresh to salt water that precedes rapid growth in Atlantic salmon.

The United States imports about 90 percent of the wild and farmed fish it consumes, and accelerating wild fish depletion in fresh and salt water has made a protein-short world increasingly reliant on aquaculture.

In February, 2017, Wisconsin Alumni Research Foundation filed a patent on the preen oil discovery, and last year, Cook, Barry and Olson applied funding from WARF’s Accelerator program to explore the business implications of the improved survival.

Preen gland secretions play a mysterious role in birds, says Olson. “It’s waterproof, a wax, and a lot of research has built up suggesting it has a pheromone function and plays a role in mating. It may be antimicrobial or help in ultraviolet protection, in addition to waterproofing the feathers.” 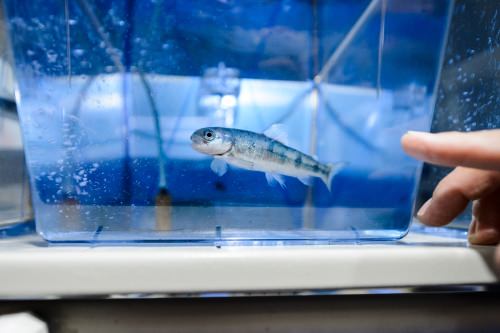 In the United States, the preen gland is discarded as waste from about nine billion broiler chickens slaughtered each year.

The cosajaba story is part of the growing interest in animal wastes and byproducts. Although meat, milk and eggs are the dominant products from animal agriculture, animals make small quantities of many chemicals that may have value. These proteins, fats and oils have been refined by evolution to have highly targeted effects.

“Mark Cook, being a world-renowned poultry expert, had been interested in this for a long time,” says Olson. “He finally got the chance when I came to his lab in 2011, looking to study the effects of lipids on immune function, particularly through diet. Fish get stressors that you never see in terrestrial animals. The oxygen content in water can dramatically fluctuate. In aquaculture, there is stress from handling and vaccination.”

The cosajaba project has had support from the University’s Discovery to Product program. “They’ve been extremely helpful,” says Olson. “D2P helped us focus. We have learned to set up financial models, evaluate the growth potential, and pin down the value of reducing mortality for many species.”

In experiments that compare fish chow with and without cosajaba, “We are measuring growth, changes in body condition, immune markers, and stress markers that follow acute stress,” says Olson, “and we plan to look at clearance of those stress hormones.”

The researchers have focused on how unusual fatty acids in cosajaba oil dampen the stress response. Before it makes sense to move from discovery to a spinoff, other questions need answers, Barry says. “How long do we need to feed the oil, and when do we need to start? Can we mass produce cosajaba oil? Can we find a faster way to test effectiveness than feeding fish and measuring stress?”

Barry says the results illustrate the difference between wild and domesticated fish. “People have spent decades domesticating fish so they can live in captivity; it took 100 years for wild trout. Walleye and perch have not been domesticated at all. Maybe cosajaba in effect accelerates domestication.”