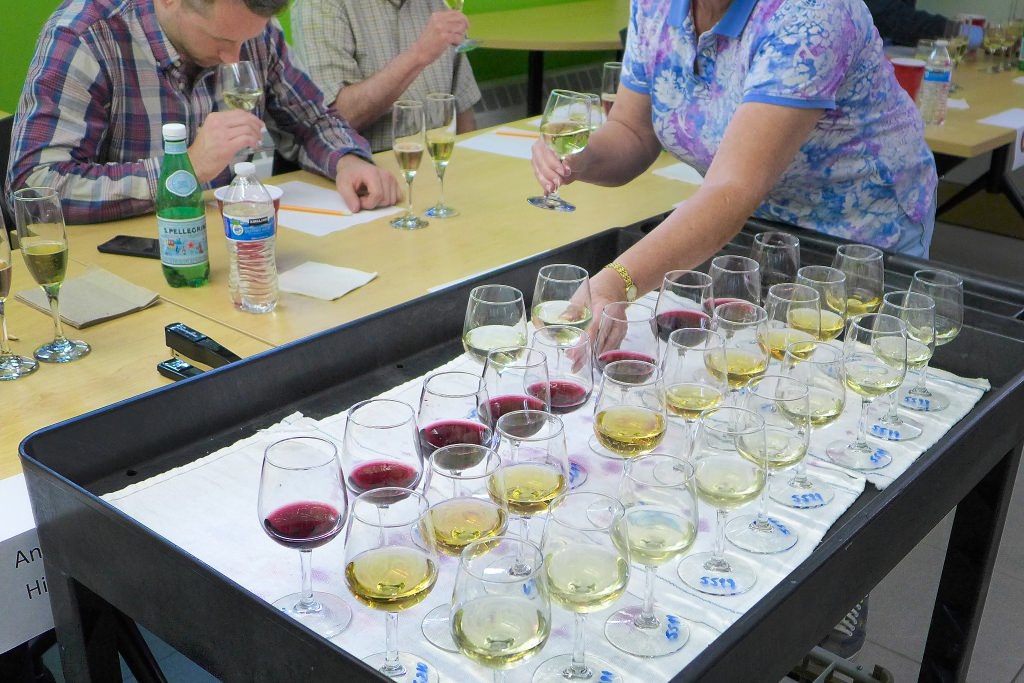 Volunteers distribute another flight of samples, each identified by number, at Wine is Wisconsin on the UW–Madison campus on Aug. 7. In the background, judges evaluate each entry’s “nose” and taste. David Tenenbaum

Nineteen Wisconsin wineries presented 93 wines at the first annual “Wine is Wisconsin” competition on the UW–Madison campus on Monday.

The wines, made from grapes, honey and fruits including cherries and cranberries, were judged by eight food writers, restaurateurs, wine experts and retailers from the Midwest. The goal, says organizer Nick Smith of the UW–Madison Department of Food Science, is to foster continuous improvement in the state wine industry.

All products had to be commercially available, and sourced at least 75 percent from Wisconsin products.

The best in show award went to Sparkler, a sparkling wine produced by Parallel 44 Vineyard and Winery, Kewaunee, with a delicate blend of tang, sweet and effervescence. 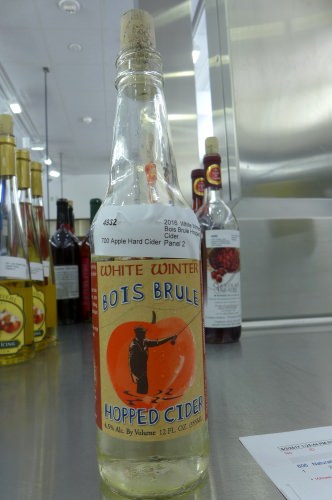 White Winter Winery in Iron River produced the winning cider, jazzed up with the flavor of hops. David Tenenbaum

Wisconsin has more than 120 wineries, says Smith, and is gaining two or three each year. Part of the increase may reflect the local allure in specialty foods, but a larger factor, he says, is “the growth in the number of grape varieties that can grow here, coming from private breeders and the University of Minnesota. There are opportunities to grow grapes in places that have not been available historically, and so we’re seeing an expansion across the Upper Midwest.”

Sparkler, like the other winning wines, had to be flawless, and to express both the particular style of wine and the nature of its grape. But the Upper Midwest is reliant on new varieties, so their usage is fluid, says judge Bradley Beam, the Illinois state oenologist. “Each grape has its own personality; so the question is, what is the best way to get it to be the best example of what it wants to be? Sometime we fight to turn a grape into something it does not want to be. Maybe 50 years from now, we’ll be settled on what grape works best for a certain style of wine, but now we’re still at an experimental phase.” 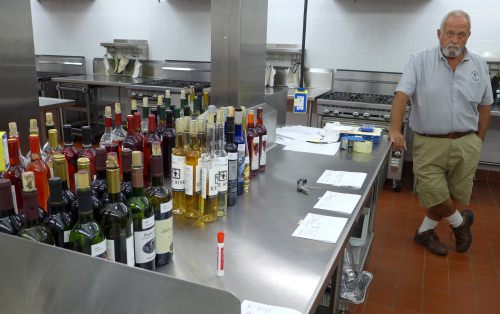 Ervin Paczawski and fellow members of the Wisconsin vintners association worked the back room to make sure the right wines came out at the right time. “Most of our club function are educational,” he said. “We are heavily involved in anything we can do to help the industry, because we consider ourselves part of the industry, even though we are amateurs.” David Tenenbaum

The contest was intended to educate vintners, improve quality and highlight progress in a growing state industry, says Smith. “My position at Food Science was funded to help identify possible quality concerns among specialty crop growers and producers, to help the industry continue improving its product so it will be recognized at the same level as California and other established wine regions. We are using the competition as a tool to let people know there are quality wines here in Wisconsin, and to provide feedback to any wineries that may have quality issues, so we can continue to raise the bar.”

As a bonus to the winemakers, each of the 93 entries will now undergo chemical analysis at food science. Makers will also receive the judges’ detailed comments. 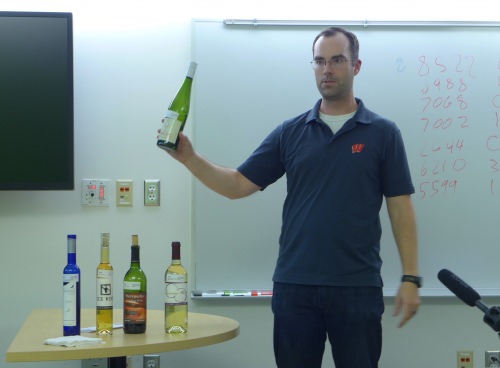 Although some of the wines elicited curious looks as the judges eyeballed, swirled, smelled and savored them, a good proportion met strong approval. The winning white wine, a Frontenac blanc, also from Parallel 44 Vineyard and Winery, “had a lot of varietal character (meaning it ‘expressed’ the grape’s character). It was well balanced,” says Christine Lawlor White, winemaker at Galena Cellars Vineyard and Winery in Galena, Illinois. “Anybody from any walk of life would come in and enjoy it. I have judged in Wisconsin before, and we had 20 percent flawed or cloudy, but there were none in our group today,” which assessed half of the entries. “People are putting in more time and effort. The wine-making is getting better.”

“It’s great to see status of the Wisconsin wine-producing community now,” says James Juedes, a judge with long experience in the industry, in the United States and Europe. “Since I worked in wineries in Wisconsin, it’s improved. It’s nice to see a lot of Wisconsin wine makers investing in education of their staff, and that’s translating to more consistent production, continual improvement.”