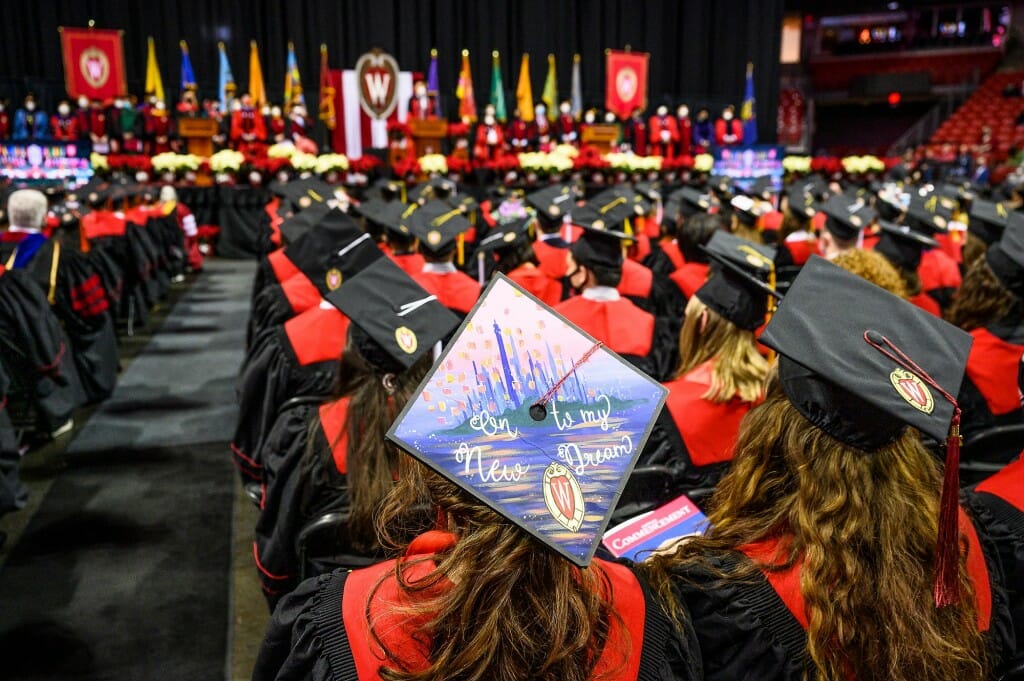 A graduate looks to the future with her mortarboard decorations. Photo by: Jeff Miller 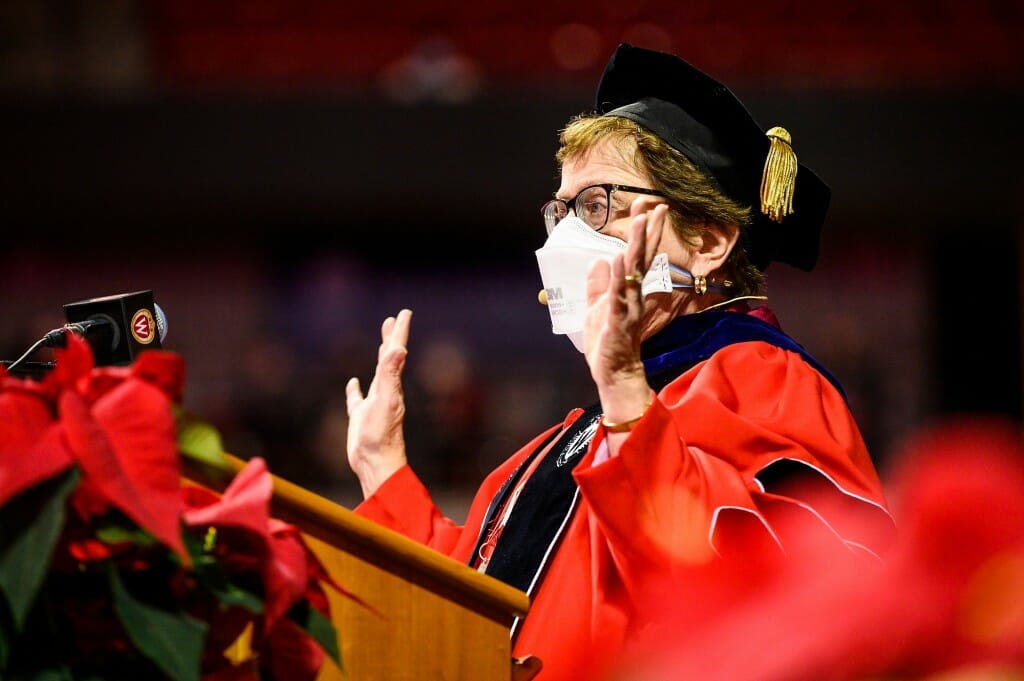 Chancellor Rebecca Blank told graduates that a college degree is the best investment they'll ever make. Photo by: Jeff Miller 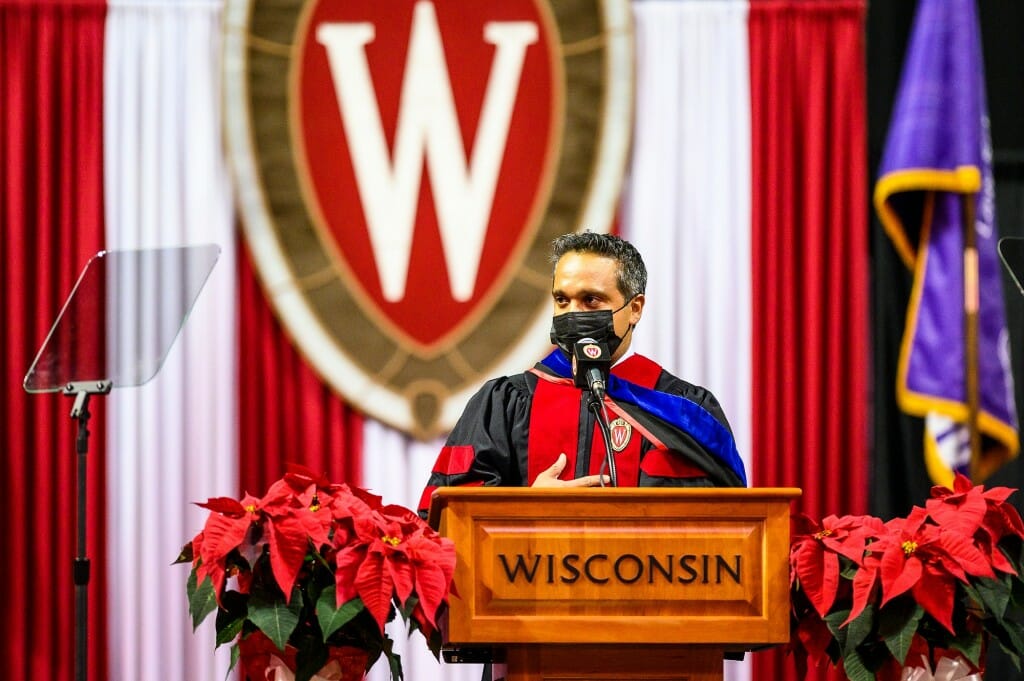 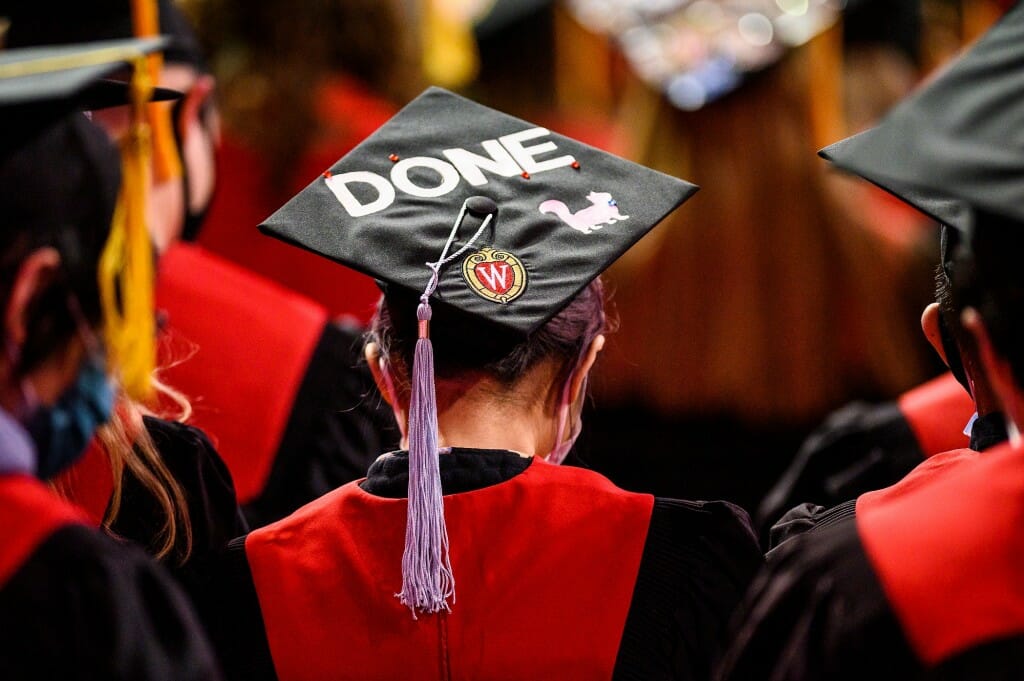 Sometimes the simplest messages are the best. Photo by: Jeff Miller 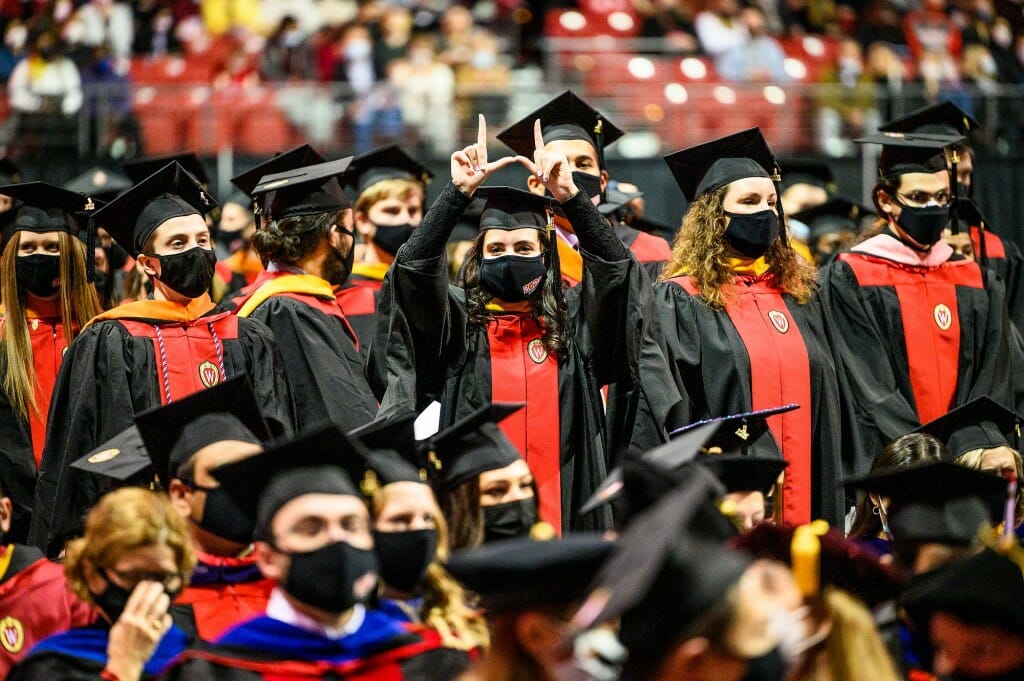 Rana Younis, graduating with a master of science in industrial engineering, flashes a W sign during the ceremony. Photo by: Jeff Miller 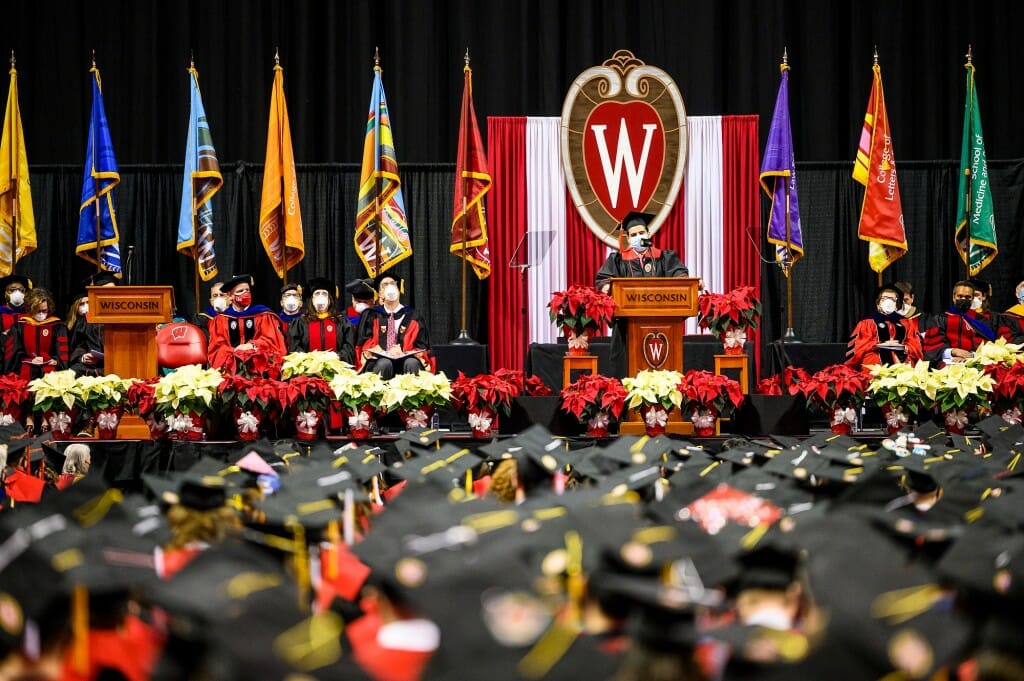 Student speaker Jai Khanna told graduates that their journey as been a rollercoaster of emotions. Photo by: Jeff Miller 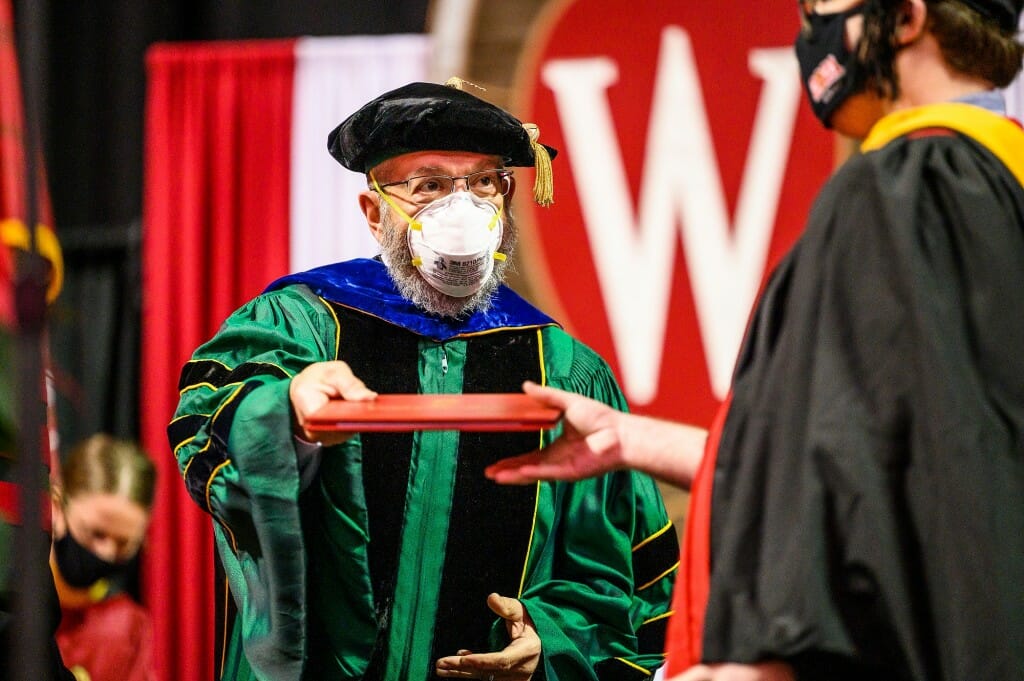 William Karpus, dean of the Graduate School, hands a diploma to a graduate during the ceremony. Photo by: Jeff Miller 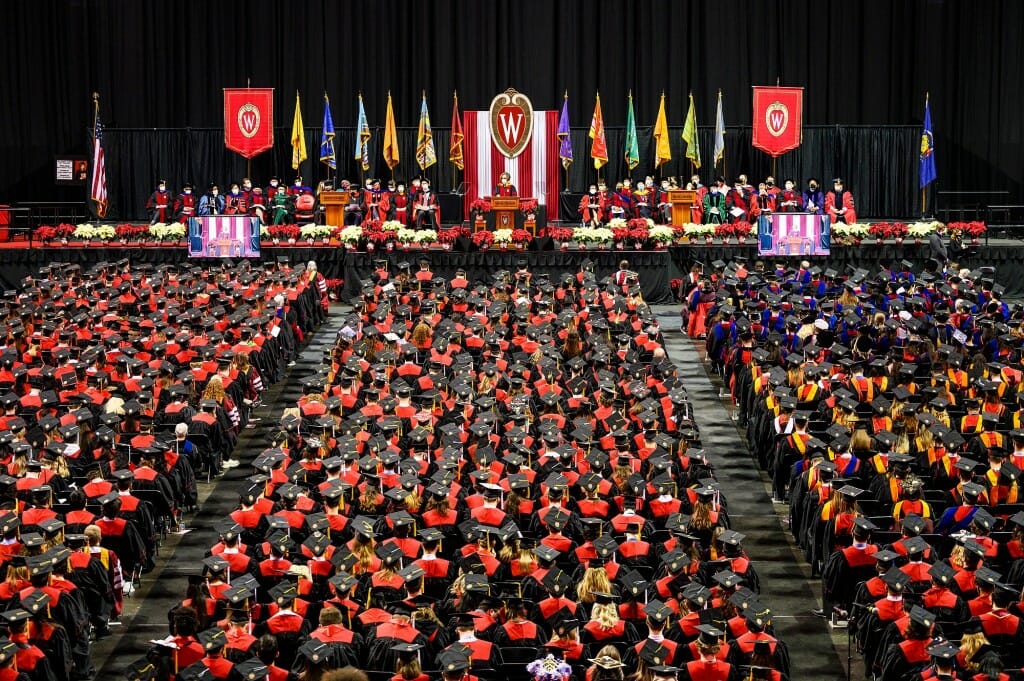 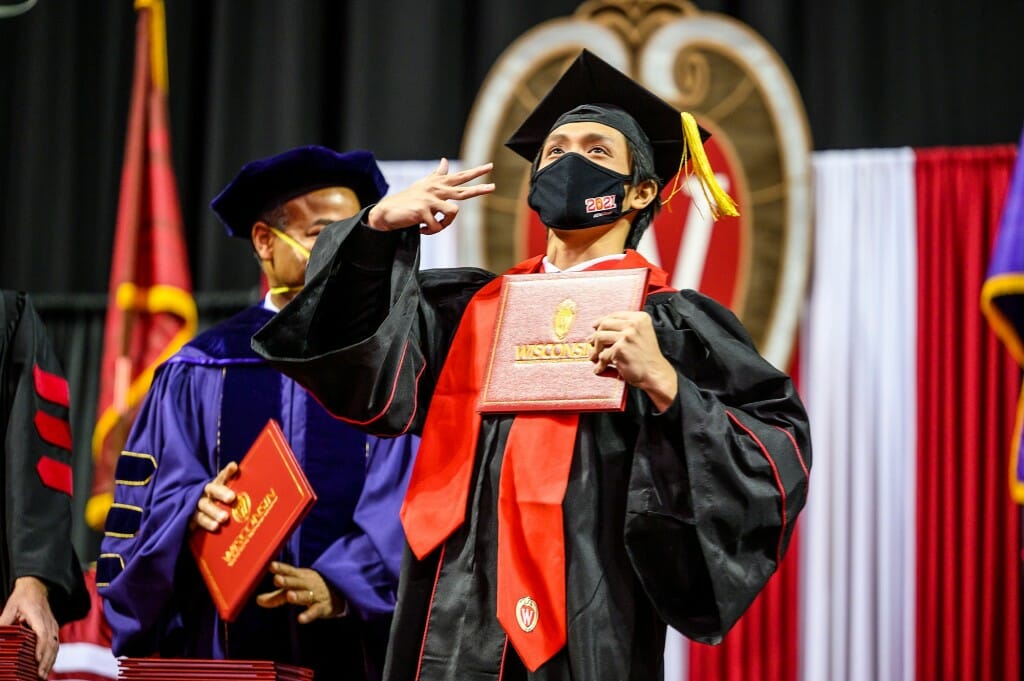 A newly minted graduate shows off his diploma while crossing the stage. Photo by: Jeff Miller 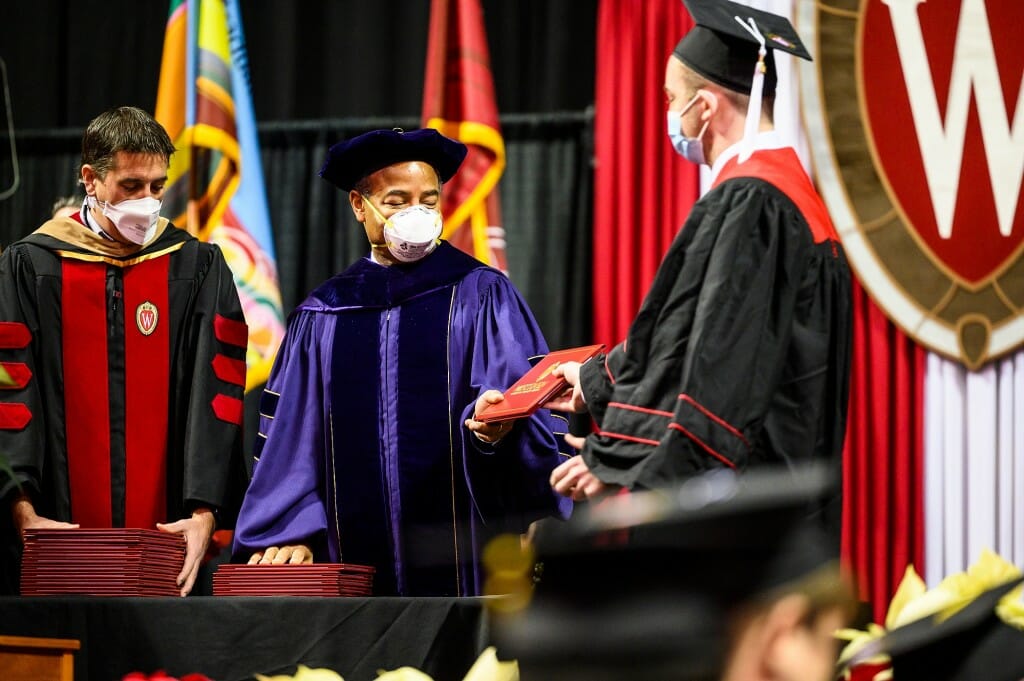 Eric Wilcots, dean of the College of Letters and Science, hands a diploma to a graduate. Photo by: Jeff Miller 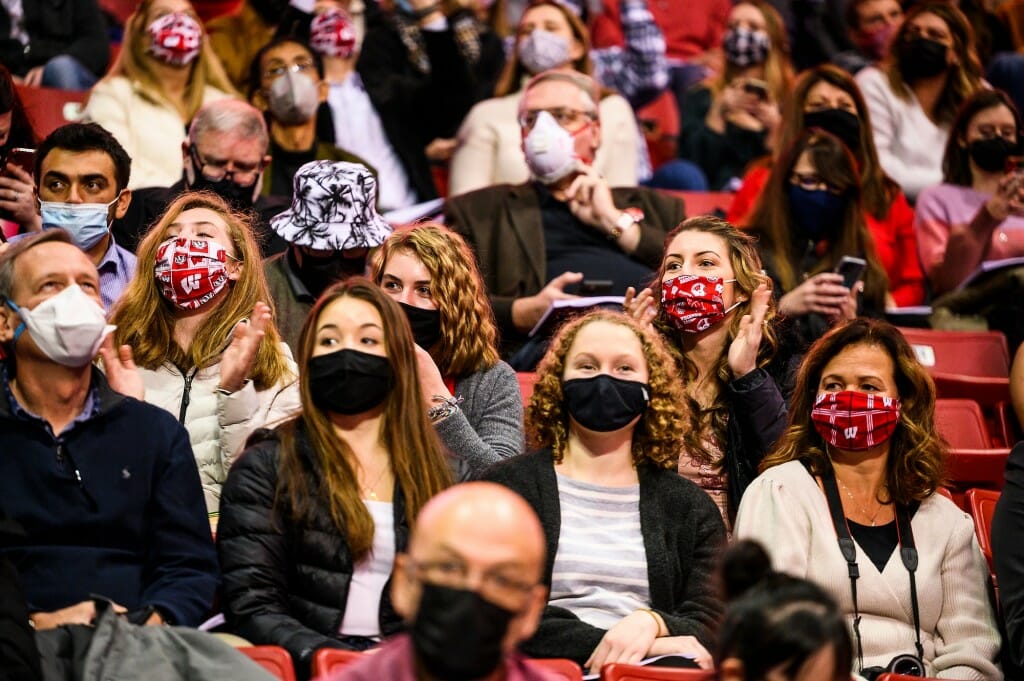 Audience members erupt in a cheer after their favorite graduate's name is read. Photo by: Jeff Miller 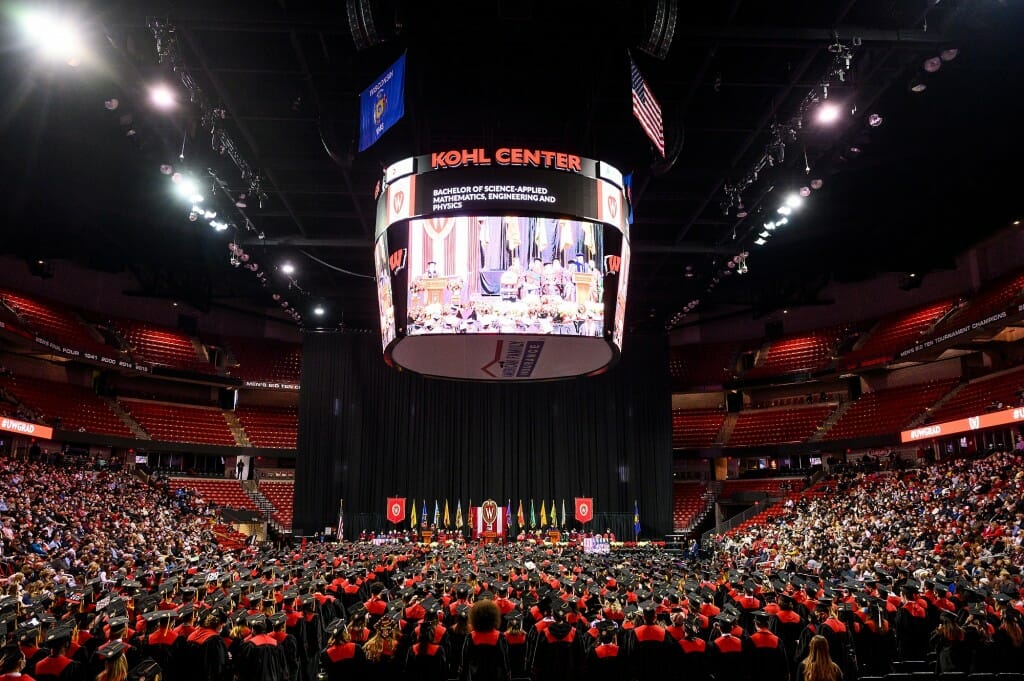 The ceremony was attended by 1,240 of the 1,800 bachelor's and master's degree candidates, plus their guests. Photo by: Jeff Miller 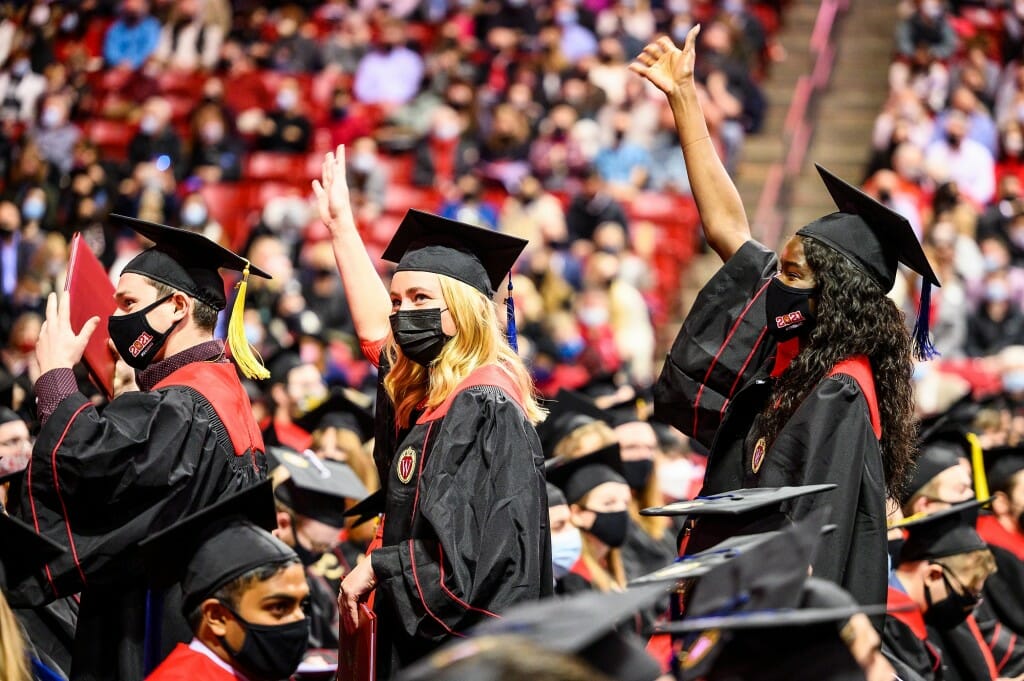 Graduate wave to the audience during the ceremony. Photo by: Jeff Miller 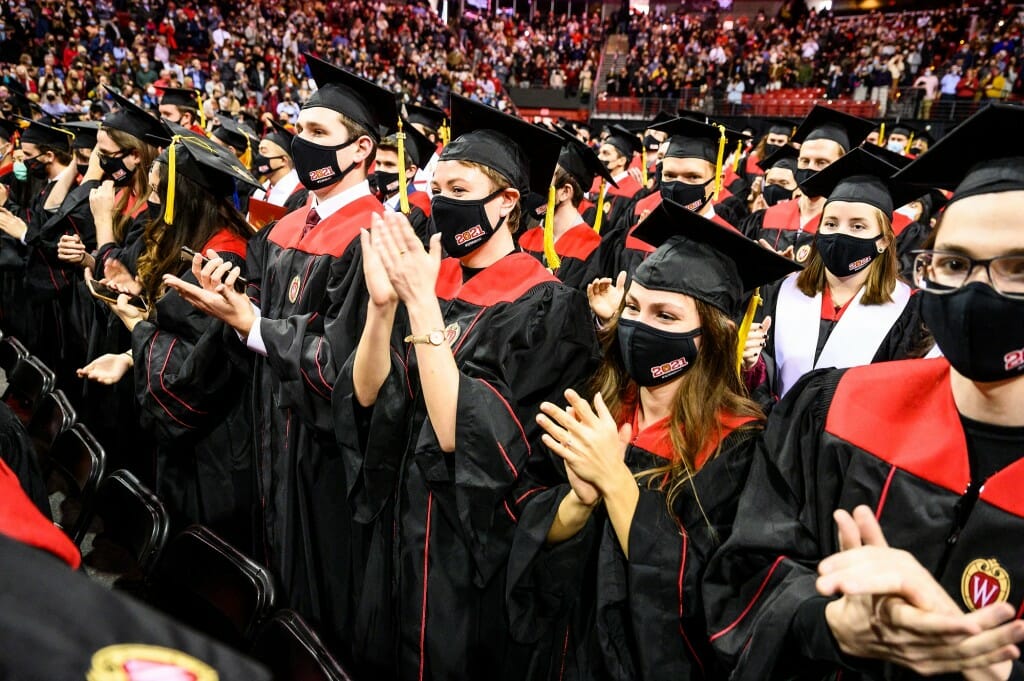 Graduates applaud at the end of the commencement ceremony. Photo by: Jeff Miller 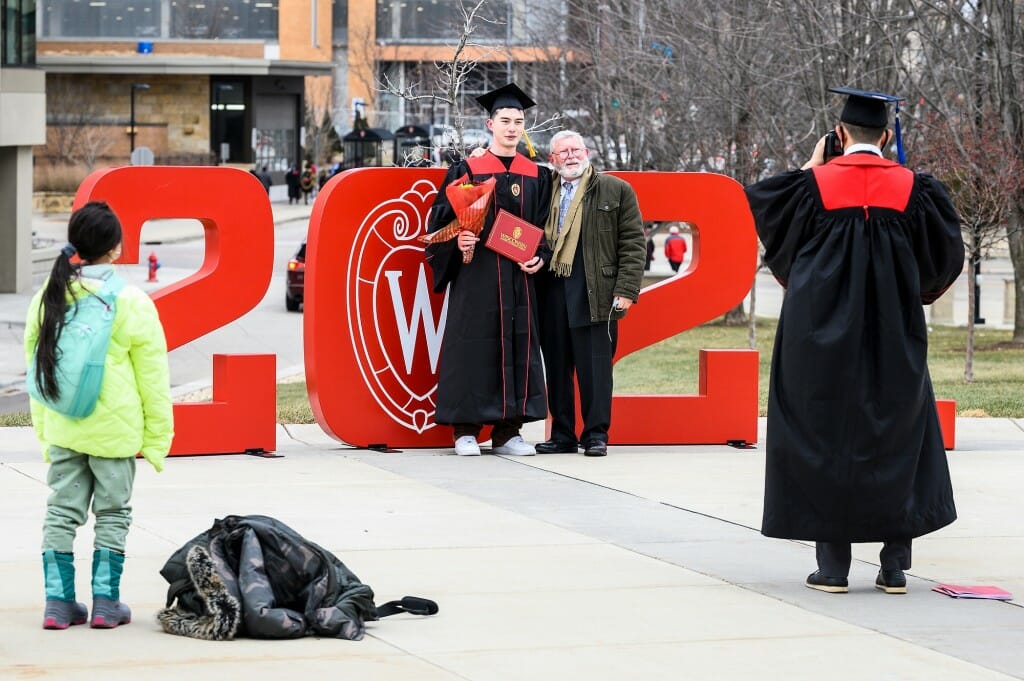 A graduate stands next to large 2021 numbers and poses for pictures following commencement. Photo by: Jeff Miller

MADISON — From the floor of the Kohl Center Sunday, UW–Madison winter graduate Martha Kowalski recounted some of the typical obstacles she and her fellow classmates overcame — caffeine-fueled all-nighters, blue books turned in at the last minute, the trudge up Bascom Hill in a snowstorm.

Then she got to the real challenge — a pandemic that threw everything it had at students. 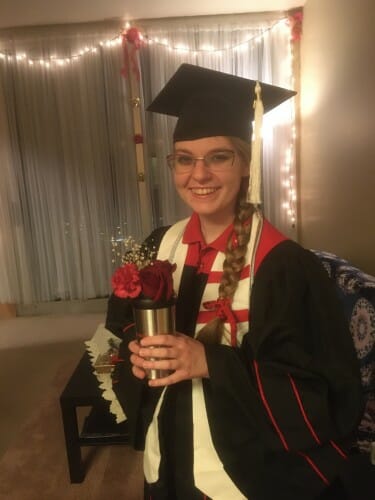 “It was tough, but we were stronger than it,” said Kowalski, of suburban Chicago, an economics and Spanish double-major who earned comprehensive honors in both. “Because look at us now — the caps and gowns, the degrees and diplomas. This is ours. We earned it. We got here.”

“I believe everyone’s journey at the University of Wisconsin–Madison has been a rollercoaster of emotions, and today, all those emotions and tears are justified,” student speaker Jai Khanna told his fellow graduates from the stage.

Just over 1,800 doctoral, professional, master’s, and bachelor’s students earned degrees Sunday. About 1,240 of them took part in the ceremony at the Kohl Center. Total attendance, including graduates, was 5,954. The ceremony was livestreamed so that friends and family from around the world could join in.

Adding to the excitement: The Badger volleyball team won its first national championship the night before. The victory earned shout-outs from the stage.

“It was an amazing game for an amazing group of women,” Chancellor Rebecca Blank said to loud cheers. 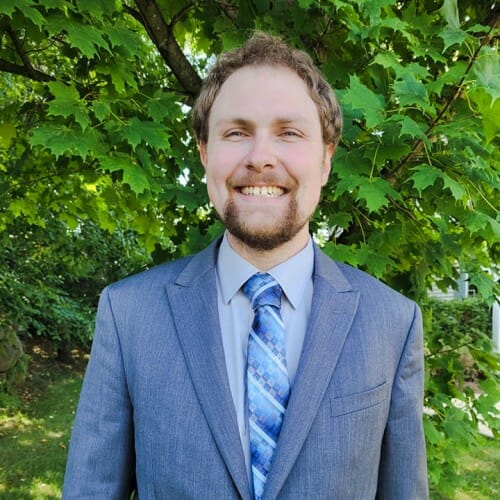 Winter graduate Tyler Johnston was among those who got to walk across the Kohl Center stage Sunday. In an interview, he called his time at UW–Madison life-changing. A native of Leon, Iowa, he attended Iowa State University after high school but was academically dismissed as a junior.

“I really wasn’t disciplined or, honestly, ready to be in that environment,” he said.

After several years in the workforce, Johnston enrolled at UW–Madison in 2019 through Badger Ready, a transitional program for adults with prior credits who’ve been out of school for a while. Bucky’s Tuition Promise made his return financially feasible. Sunday, he earned a bachelor’s degree in computer science with a 3.8 GPA.

“Most people don’t get a second chance, so I wanted to make the most of it,” he said. “I’ll be forever grateful to Badger Ready and Bucky’s Tuition Promise for giving me this opportunity to rewrite my story.”

Keynote speaker Manu Raju, CNN’s chief congressional correspondent, described how he decided, as a UW–Madison freshman, to take a chance and try something new as a sports reporter for The Badger Herald. It was a risk worth taking, he said, just like the bold decision his parents made to immigrate to the U.S. from India.

Yet Raju, who earned a bachelor’s degree in marketing from UW–Madison in 2002, cautioned that risks won’t always lead to rewards, at least not ones that are always readily apparent. He said his own career has been filled with its fair share of disappointments.

“As someone who has been humbled by having my hopes dashed repeatedly, I know it takes a great deal of courage to view our mishaps as bellows that can nourish, rather than extinguish, the embers of our ambition,” he told graduates. “But that courage to continue is precisely what characterizes the University of Wisconsin and its alums. For as we know, fortitude isn’t always necessarily found in the throes of a fight, but in one’s ability to withstand the wake of defeat.”

Chancellor Blank told graduates that a college degree is the best investment they will ever make, and that to have finished their degrees while living through a life-threatening pandemic that disrupted every aspect of life was no small thing. 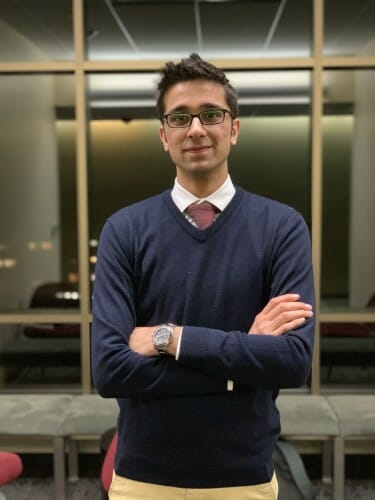 Graduate Saad Dagra said coming to UW–Madison was the best decision he’s made so far in his young life, even though it meant studying 7,500 miles from home. His experiences on campus contributed to his decision to return to his native Pakistan to start his career, he said.

“UW–Madison taught me to find meaning in what you do and to be your authentic self, because that’s when you will be at your best,” said Dagra, who double-majored in actuarial science and risk management and insurance. “I’ve realized that what drives my sense of purpose and fulfillment is my home, my family and my childhood friends.”

Dagra returned to Pakistan early last month to finish his final semester remotely while working on a start-up company he hopes to launch soon. Friday, he flew back to Madison with his father to attend commencement in person. It was a 30-hour commute one way — and worth it, he said.

“I’m the first person in my generation to go abroad and graduate from a foreign university,” Dagra said. “It’s a proud moment not just for myself but for my entire family.”

READ ON THE WEB: https://news.wisc.edu/look-at-us-now-graduates-reclaim-kohl-center-traditions-for-2021-winter-commencement/